Started my climb up to the Fortress around 9:40, although I stopped at a cemetery on the ‘main’ road of Blagaj on the way. There’s a memorial to all of the local folks that lost their lives in the civil war between 1991 and 1995 – their names and year of birth in alphabetical order under year of death. Some as young as 18, and some in their sixties – what a sad, sad waste. The single actual serious moment of my trip so far.

The road to the Fortress winds around the back of the mountain from Blagaj – it’s a good thing Nedzad gave me details about which trail to take once the pavement ends and you leave the road. The first ‘trail’ you notice is very well defined, and goes basically straight up – you’d have to be a mountain goat to make it (apparently it was made for moving equipment or something when some kind of repairs were done awhile ago). The real trail was a bit of a long climb, a very narrow, rocky path full of switchbacks that you wouldn’t want to go off the edge of. I didn’t know I could sweat that much – it was dripping off my fingers – good thing I left before it got hot!

The climb was worth it in terms of views of the valley – Blagaj, Buno River – you could even see Mostar in the distance. 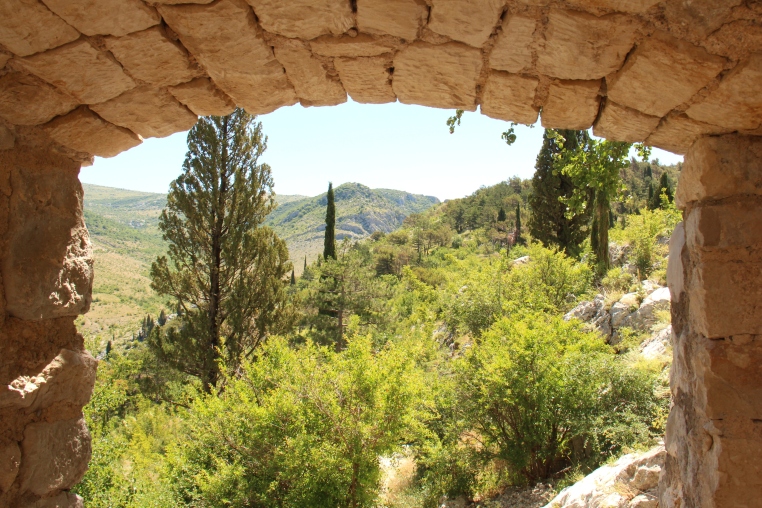 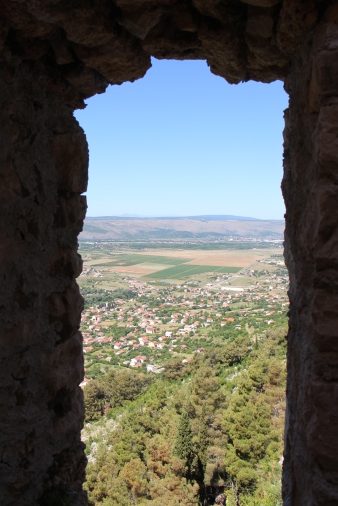 The walk back down was much easier and quicker, although I really had to watch my step.

Got back to camp just before noon, tired, sweaty and hungry – at least I brought enough water for the walk. Happy to read the UK election results – ha ha Theresa May! Still don’t know what’s going to happen after the BC election – really hope Christie Clark doesn’t get to form the next government.

Bit of a lazy afternoon, then took myself out to dinner at the bar (Goldfish) across the river that’s showing the football game tonight. Had a nice grilled chicken salad with fries on the side, while watching Nadal thump Thiem at the French Open (at least I assume he won – one of the locals got the remote from the server and changed channel to the Bosnia and Herzegovina against Greece pre-game show). The Americans, Lynn and John, joined me when the game started.

Had a nice time chatting while watching the game – John left early but Lynn stayed. A new Dutch couple from the campground also came over for a bit. Game ended in a tie with no over-time to break it – apparently it’s not an elimination game so each team got 1 point and will play someone else in a few weeks.

Lynn and John have hired a guide to take them to the Green Cave tomorrow afternoon and have invited me to join them – should be interesting.