Got up at what I thought was a few minutes after the alarm at 7:00 and went and had a shower (it was closer to 8:20). I pushed what I thought was the light button and the water started pouring. I quickly got undressed and jumped in, and found it very hot. There was a knob on another wall that I turned until it wasn’t so scorching hot, then it suddenly got very cold. I figured out that the flat button on one wall is the hot, and is on a timer that stops after a minute or so, and the knob on the other wall is the cold with no timer. In the end I had a great shower and felt much better being nice and clean.

Had tea and breakfast at the campervan, then went down for a cup of tea at the cafe. Loaded a couple more photos to my blog, but again the speed was lousy so didn’t even finish Monday’s. I took a couple of photos of the coastline to the west when Colin asked if I saw the cows – sure enough there were a bunch of cows grazing like mountain goats on the very steep hillside right above the drop-off to the ocean.

A group of four cyclists came out onto to terrace and one of the women took a couple of photos – I heard them speaking english so I pointed out the cows to her. They asked where I thought they were from so I said ‘well, I would guess either Australia or New Zealand’. They collectively groaned when I first said Australia – they must get the bigger, inferior (in their opinion) comparison a lot, just like I do with people thinking I’m american. I pointed out that that’s why I have Cdn flags on several of my things – we all laughed at that.

We headed west just before noon, and left the highway at Llanes to try to find a store – it must be a festival day or something – there were so many people, some in traditional costumes, all going to the city centre, so we went around and back to the highway.

We tried another, town – Ribadesella, and had more luck. It seems a little bit touristy, but we found parking and walked with the dogs into the centre where we found a market. I picked out a couple of bottles of wine – 3.90 euros each, then went up to the counter to choose bread. At the counter I noticed a few more bottles so I asked, in Spanish, how much? He responded in Spanish and I didn’t understand a word, so he punched it into the cash register – only 1.70 each. I asked if they were vino tinto, and they were – good deal! I then asked for a baguette for Colin, and pointed to something that looked like a whole-grain roll or loaf for myself – shopping done.

Back on the highway headed southeast to the town of Pola de Lena, which wasn’t as charming as some of the towns have been, but is on tomorrow’s stage route. After driving to the south end of the town we finally got on the north-bound road and drove towards the Alto del Cordal, the second last climb of the stage.

About 3/4 of the way up we found the first place that it was possible to pull over to camp – it was a parking area of some kind of old unused industrial or mining place, and there was only one campervan there. We decided to go for it, so got parked and setup the table and chairs so no one could park in front of us next to the road.

I wanted to see the summit of the climb and knew it wasn’t that far so went for a walk up the road. After just over a km there were two vans parked at a fairly wide turnoff so I asked the lady how far the summit was – I think she thought I meant how high, so her answer made no sense to me and I continued walking.

The summit was actually just around the corner – maybe a few hundred yards. It had a large flat parking area and only three or four campervans there, including the Belgians we’d seen before. I took a couple of pics of the place, then hoofed it back down the hill to let Colin know – we quickly made the decision to move so packed up the table and chairs. Just before we left I jumped out of the campervan to go to the back to check the door and in trying to avoid some large weeds that were right beside it I managed to get my left ankle tangled in a blackberry vine. Pulling to free it was not the thing to do – it just made it tighter. I now have a nice ring of bleeding scratches and little cuts around the ankle, and they sting too.

What an excellent place that we moved to – I think it’s a parking area for hikers as there are trails all over the place. The Belgians were happy to see us – had a couple of nice chats with them. One of the ladies gave me an antibiotic gell for the bites on my arm – I still couldn’t find my cortisone cream and none of the pharmacies in the towns we’d gone into had been open.

I took the doggies for a walk up the hill to the east – you can see so far in every direction and it’s all one beautiful vista after another.

In the evening we heard cow bells coming very close so I went outside to investigate – a rancher in a car had come down one of the trails that I’d taken the doggies for a walk on, and got out with a big bag – he threw down a couple of handfuls of large kibbles and the cows ran for them. Who needs a dog for herding when you have cow-kibbles? 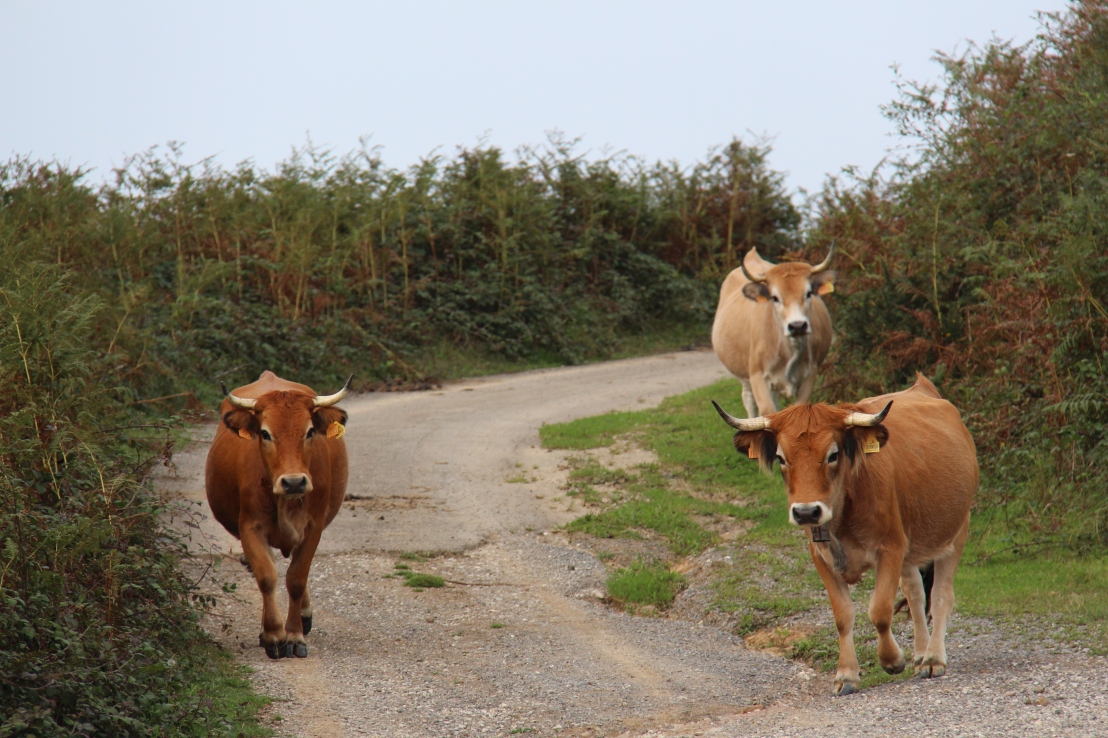 With the help of another guy that spoke a tiny bit of english I asked if the cows had names, but the farmer said they only had numbers. Then I asked why only two of them had bells on – were they the leaders, or the bossiest ones, but he said no reason, just that some do so he knows where they are. Then I wanted to know if they were milk or meat cows – he said ‘carne’ which I know means meat. I said they looked like they would be delicious and the other two guys agreed then we all laughed.