Ate a small breakfast in the room, then left the Hotel Brianza around 9:00. Stopped for coffee at an ‘AutoGrill’ along the motorway, then continued on southeast until we turned onto another highway heading southwest thru the mountains. Found out by reading the local news that the smoke we saw yesterday near Susa was from a new forest fire in the valley and many people have already been evacuated – I hope they get control of it. 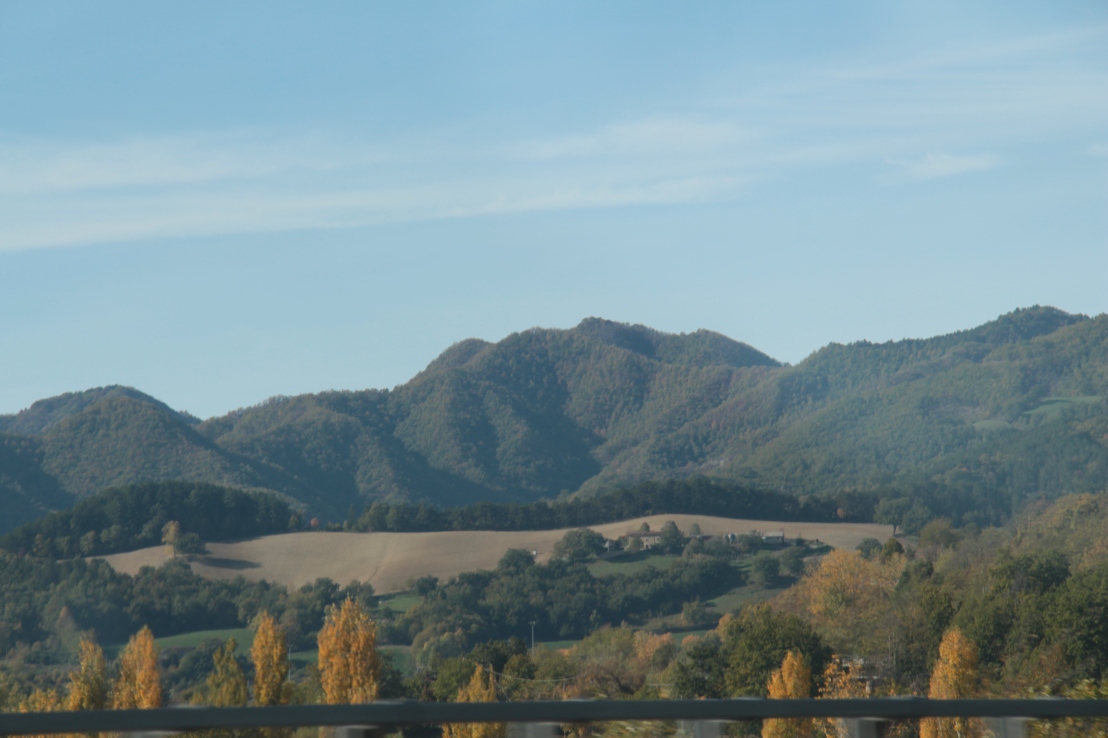 After a bit Colin mentioned that the area looked familiar and we wondered if it was the same highway that we’d taken north when we left Pian di Boccio back in May. I looked up the photos I’d taken that day and thought it could be the same route, then saw one I’d taken of a tunnel and the accompanying sign – all of the tunnels have names and the sign also shows how long they are. The photo I was looking at was of the Quarto tunnel and it was 2600 metres long. No sooner had I said that than we came upon that very tunnel – same sign, but from the other direction – we were on the same highway.

They were doing some road-work so we had to take a small diversion thru the town of Bagno di Romagna, which was very pretty. It was where the Giro started the day after we’d seen the ITT on May 17, and there were still pink ribbons and decorations up all over the place. When the Giro comes thru a place they celebrate it for a long time!

We passed by Perugia and kept going south to Marsciano, where we stopped for a bit of a walkabout then sat down for a drink and some pizza – which was very good, with a nice thin crust and delicious cheese.

Next we drove to the village of San Venanzo where Colin had pre-booked the hotel – it was all locked up and no one answered the bell, so we decided to go to Papiano and see the house he was interested in.

We parked the car and walked up a couple of roads but they weren’t the right ones. We asked a lady that was sitting outside her house if she knew where Linda the english woman lived – she said oh yes – in the rose coloured house with the green shutters – you go back down to the square and up the hill on the other side.

We followed her directions and found the house – up a hill with fairly steep small winding roads for cars and lot of stairs for walking. We had a look around the outside – it’s on one end of a block of 4 or 5 connected houses. There’s a church bell-tower very close by and I’m trying to learn to like the bells. This one is on time (not 3 minutes late, like some) and tolls the hour with one bell and has a second chime with another bell with a different tone if it’s 15, 30 or 45 minutes after the hour.

Back down in the square we had a drink (coffee for Colin, red wine – surprise surprise – for me). Took a different road back to Marsciano, then San Venanzo, where the hotel was now open. Colin confirmed with the manager that the room had two beds, and he said no, it was one large bed but if we gave him 10 minutes he would re-make it. He did show us the room – more like a suite – and we went for a walk while he re-made the bed. 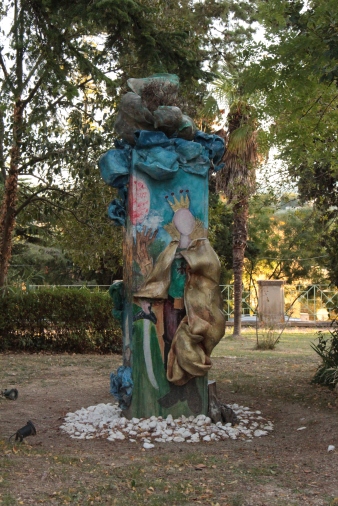 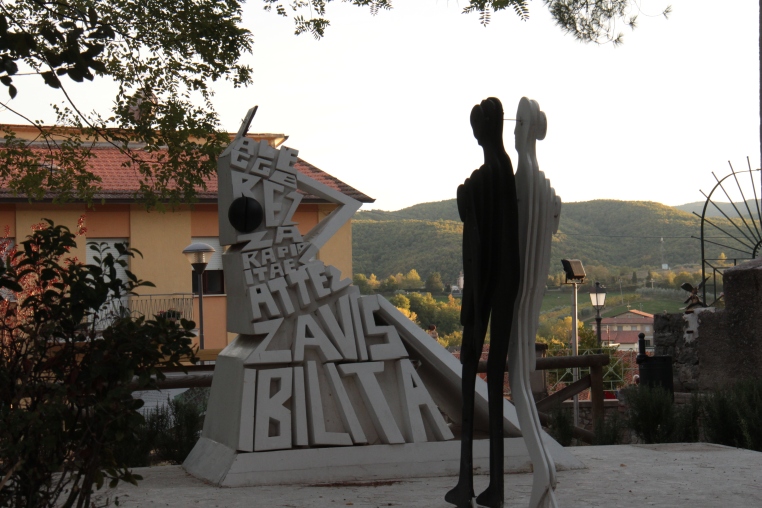 We are almost at the top of a hill and there’s a large park that used to be the grounds of a count’s chateau, which is still there. There are several art-works and sculptures in the park and we walked around a bit before going back to the hotel.

The one large bed was now made into two – with about 1 1/2 inches between them, but with separate bedding so all was good. Again there was a small fridge so we stowed the food from the cooler (that was no longer cool) and had a light dinner.