Had a nice hot shower followed by left-over pasta for breakfast.  We were on the road north by about 9:00 and followed the same route we did last year.

North to Chioggia, then northwest toward Padova which we by-passed then north to Bassano which we also by-passed.  From there it was northwest through the mountains towards Trento. 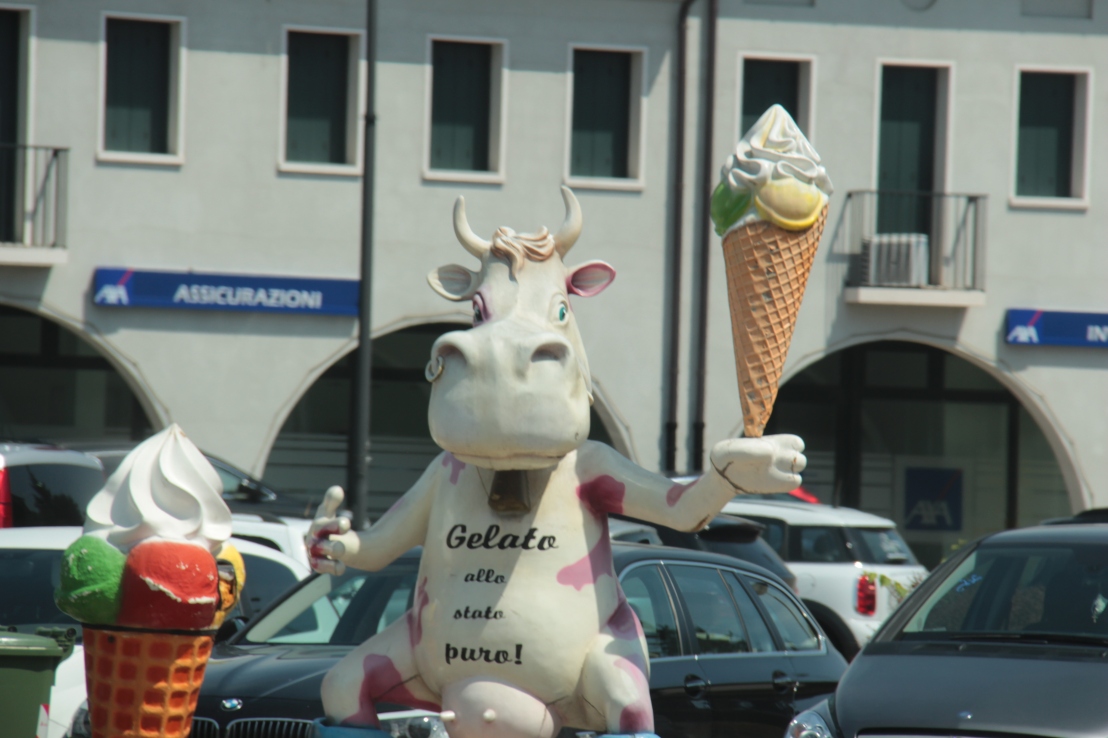 It started to rain sporadically as we approached our destination for the day – the campsite of Due Laghi just outside the town of Levico Terme.  We stayed here for two nights last year and liked the place so have returned.

We walked to the campground’s restaurant to try to watch today’s Giro stage but it doesn’t open until 4 so we tried the restaurant next door but it doesn’t have tv so we then popped into the office.  Mo once again got some of the attention she adores, and we were told that the campsite’s restaurant does have tv so we went back to the campervan to wait until 4. Today’s stage is very important – it’s a climb up The Zoncolan – one of the most feared climbs in all of cycling.  It will be do-or-die for some riders and we really want to see it.

There is a large party of older Italian folks in many campervans near us – they’re playing bottchi-ball in the rain and seem to be having lots of fun.  They belong to a camping club that has been meeting and going on trips for 50 years now.

Went back to the restaurant at 4 only to see their tv sitting on a table and not hooked up – the waitress told us that hopefully in ½ hour it will be working.  Back at the campervan Colin tried for about 45 minutes to get the satellite dish to pick something up – he moved the van several times to no avail. There a just too many trees above us to get anything so we gave up.

Read a book for awhile, and went down to the corner of the campsite to see what the little tent/booth was that the camping club had put up.  It’s not a bar or snack stand – it’s a band tent for music they’re having tonight.

Returned to the restaurant for a glass of wine – the guy was just finishing setting the tv up so he turned it onto the news for us to see if we could get any Giro highlights.  At least the wi-fi reception is pretty good.

Afterwards I wandered over to the Italian’s music area – they’ve all set up chairs in front of the band and I watched and listened for quite awhile.  The fellow on the harminica was pretty good and they had a clarinet player on some songs as well.

After awhile I went and sat outside the restaurant and face-time Dominic – he told me that the place where I got my tent told him that the maker has a lifetime warranty and he’s going to call them on Monday to find out how I go about getting the poles/frame replaced.