There was a terrific storm during the night – some rain but mostly wind.  The tent held up nicely and nothing inside got wet.

Went for a nice little bike ride after breakfast – followed the path that leads east from the campground, then circled a bit north towards the river.  There are many paths, large and paved, as well as small dirt ones. The one that goes west near the river is excellent – I believe it goes all the way into the old city but I didn’t follow it that far, turning instead back towards the campground.  I did see many small tree branches and one very large one brought down by the storm in the night.

Upon returning I changed, packed a few things in my backpack and we headed north to Poza de la Sal –  it ended up being the same road we had come south along into Burgos on Sunday. We intended to stop and have a coffee before heading to the mountain summit that the first day of the Vuelta de Burgos race will be going thru but couldn’t find an open cafe or anything.

We had a heck of a time trying to find the right road for the race – there were no orange arrows in the town yet but we knew they were coming thru.  Also, the road number on the map and the road number from the race website were different, but we figured it out anyway after a couple of false starts.

The climb to the summit won’t be fun for the racers, but at least it isn’t quite as hot as it’s been for the last few days.  There’s a fairly large flat area at the top, and there are wind turbines all over the place.

Also a couple of combines harvesting grain and blowing it into a large pile on one side of the big ‘parking’ area.  There’s a statue of a vulture on top of a tall triangular base that has writing about a Dr. ‘Somebody’ but I’m not sure what it was about – maybe a scientist of some sort that saved the vultures around here from extinction or something.

I went for a walk along one of the trails and it just went down and down, eventually turning a corner and opening up onto a great view of the wide valley below, although it was quite hazy.

The banner marking the summit was already there when we arrived, and then the line painters came.  I walked over and looked in the back of their truck and saw that they had boxes full of orange arrows so I asked if I could have one.  They said they didn’t speak English so I just pointed at the box – they gave me one and I was pretty happy. As I walked across the road back to the car one of the guys came after me and handed me several more – I’m getting a collection!

Even though the temperature isn’t as high as it’s been it was pretty hot – I had my hat on to protect the tops of my ears and managed to set the umbrella up to shade my body.  The white cotton shirt is getting pretty ragged but protects my arms ⅔ of the way down. 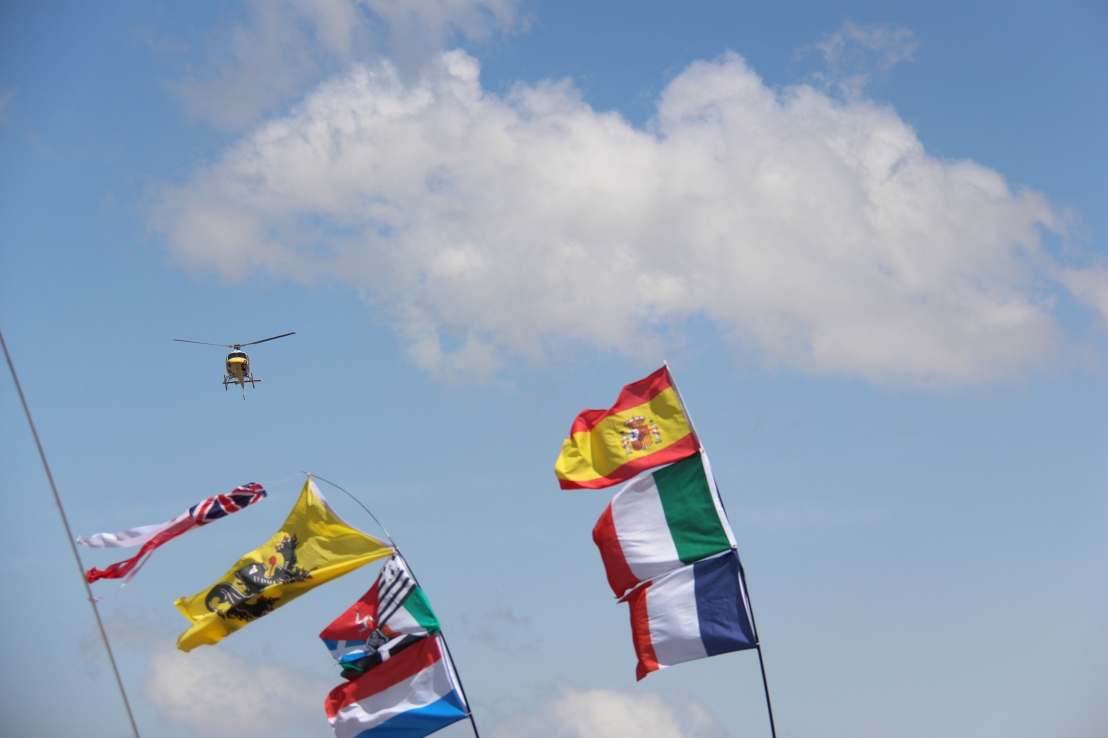 A very nice older English couple pulled up and we chatted with them for awhile – Joy and John, who know a bit about the cycling races, but had happened along not knowing the race was coming thru.  They didn’t stay to watch, but were going down into Poza to try to get a coffee – we wished them luck.

There’s not as much fanfare announcing the arrival of the racers as there’s been at other races – especially the TDF – but we still knew when they were coming.  Several motos and some team cars, then a breakaway of six or so, followed about 3 minutes later by the peloton. Once again, even though it’s the end of a long fairly steep climb they all seemed to be going so fast. 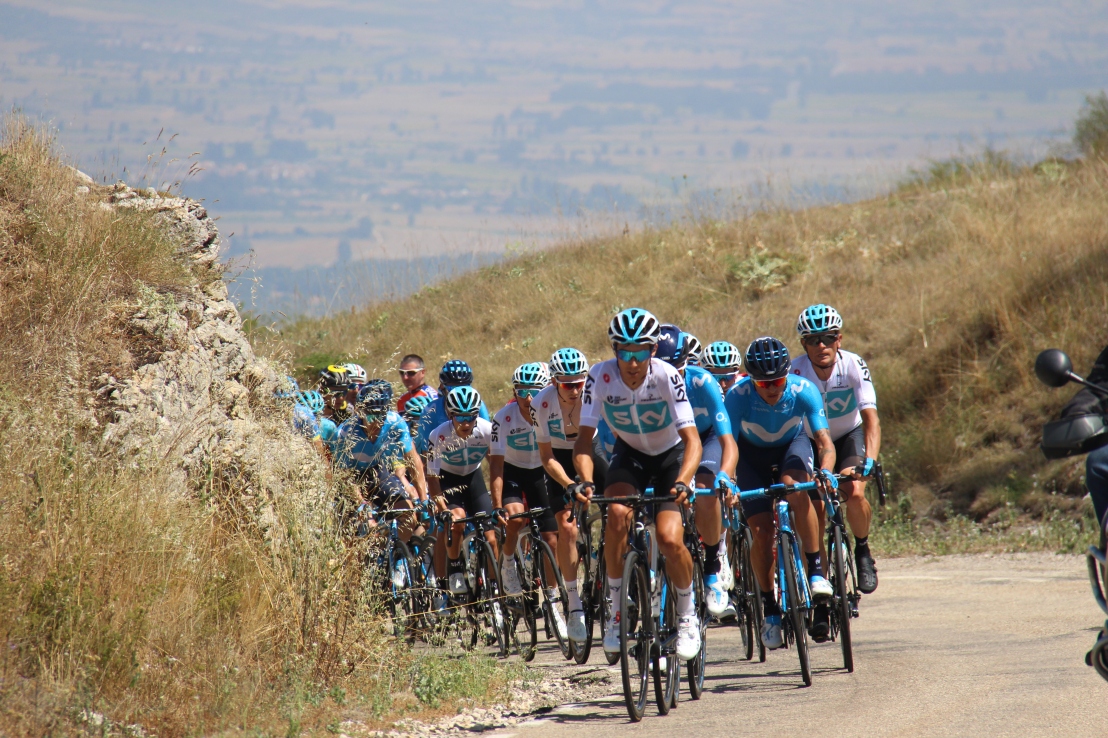 Once they’d all passed we took down the flags and packed up – rather than going back to Burgos the way we’d come we followed to route of the stage for a bit and took a different way home to the campground.

For dinner we decided to wait for the paella – if you want the seafood one you have to order it for two people, and it takes about an hour – it was worth the wait.  We got ours to go and ate it at our campsite – well, part of it, as it could easily have fed four or more. It was excellent, having prawns, langoustine, crab, mussels, tiny clams – all just delicious – went to bed very stuffed.