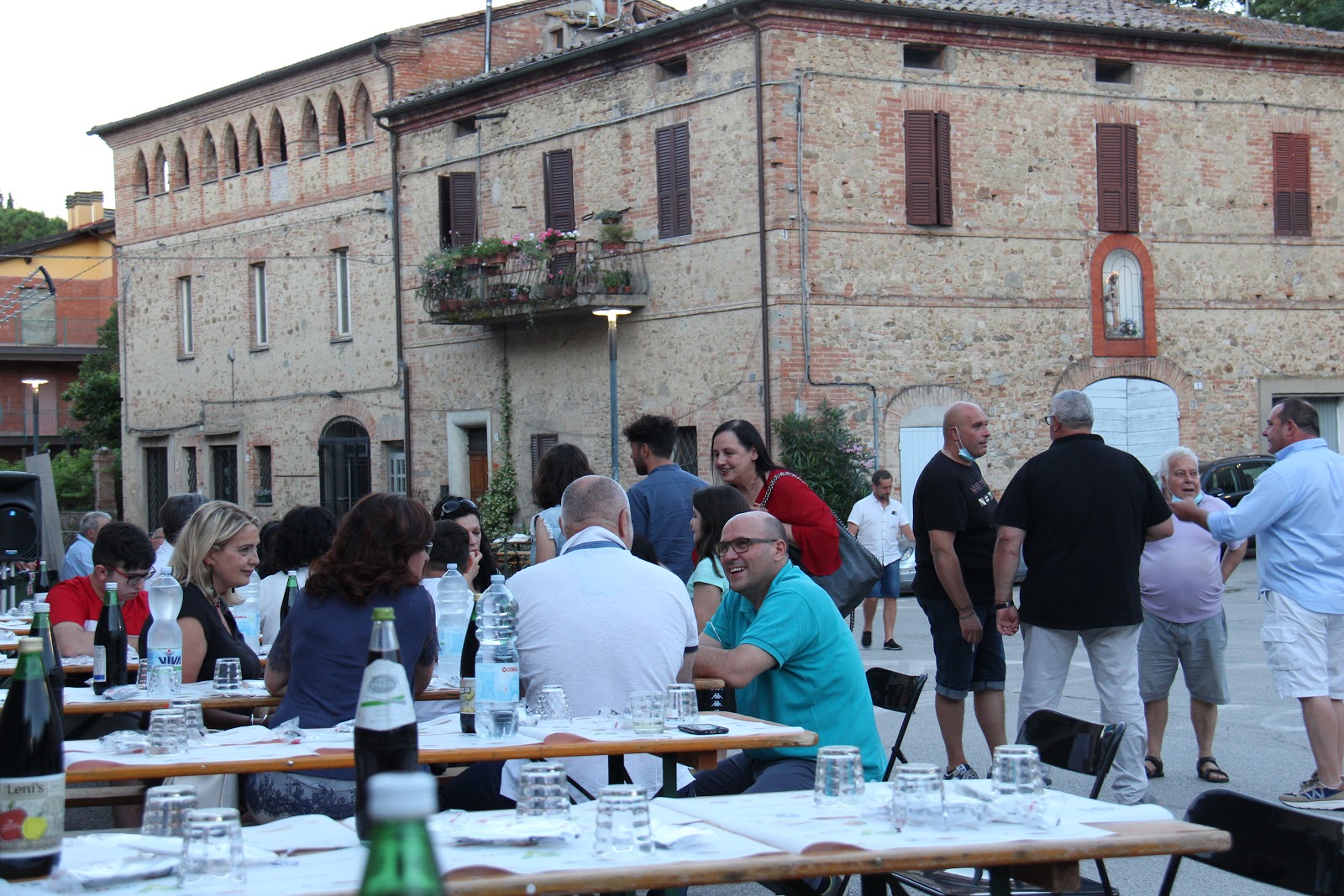 Antonio had a Festa at the bar on Saturday – it was very well attended.  He had two tv screens setup outside for folks to watch the Italy vs Austria calico/soccer/football game.

Dinner was served very late, and were we ever hungry by then.  The first course was pasta with ragu sauce – very tasty.  Second course, that came some time later, was a sausage/meatball dish and also tasty.  The main course arrived, again some time later and was roast pork, served with a bit of salad.  This dish will be mostly eaten by the doggies, I think.

The calcio game went into extra time, and fortunately the home team won 2-1 so all the local fans were very happy.

We went for a final ride on Sunday morning, stopping in Vilanova for a cappuccino.  We were seated at an outdoor table next to an elderly gentleman who started up a conversation with us.

While he spoke no english we did manage to talk for awhile and understood that he was born there, and that the local calcio team, from this village of only 300 or so people, managed to beat all of the big teams from large cities such as Rimini, etc.

We managed to leave by 2 in the afternoon on Monday, after many long hard journeys with the wheelbarrow (by Colin) with stuff to the campervan and back.  Because of the work going on at the apartment building below us we had to go all the way up and around the bell tower to get to the parking area where the campervan was.

The drive north/northwest was relatively good, and we reached Marina di Carrara at a decent time, stopping for the night very near the Sea.  We found out that unfortunately the gas wasn’t coming through so couldn’t make a hot dinner – luckily we had alternatives.

After a fairly early night and a very good sleep we were on the road early the next day – doggies like to arise early, go for a quick walk, and get fed, so since we were awake anyway we hit the road just after 6:00.

We started hitting major road works before Genova – in fact it took us hours to get past the city and to the highway north to Alessandria.  It’s great that they’re doing work on the many, many tunnels and viaducts, but boy does it slow things down.

After finally passing the major part of the roadworks we arrived in Cavour slightly before 1:00.  We stopped for a beverage (coffee for Colin, and guess what?  vino rosso for me) and were on the way again mid-afternoon.

We took the pass from Sestriere to Briancon and got by the French border guards with no problem.

After a long day we made it to a lovely spot just outside Embrun where we stopped for the night.