We got going to Selvino nice and early so there was no chance of getting caught behind a road closure.  The drive up the twenty hairpins was a bit hairy at times but the number of amateurs going up wasn’t too bad.  The road crew we’d seen the other day had done a pretty good job, and we couldn’t see too many bad spots on the surface.

We settled on a parking lot a very short walk from the main road through the town that was part of the route.

Taking the dogs with us on a walk to get a coffee we noticed that a great many of the locals also had dogs – every one of which Henry barked at if he saw them.

We returned later to the same cafe/restaurant for lunch, which was very nice and had wonderful views back towards Orezzo and beyond.

After lunch we settled the dogs back in the car and got ready for the race.  On the way to the spot we’d chosen to watch from we passed an Israel Startup Nation team car and I immediately went over to them.  I told them I was Canadian and showed them the flag on my backpack, as well as the bidon I use that is the old Israel Cycling Academy one.

I said that Michael Woods (Canadian!) rocks and they said ‘maybe it will be him today’.  They then gave me a new ISN bidon and I was happy!

As usual we knew when the first rider was approaching… 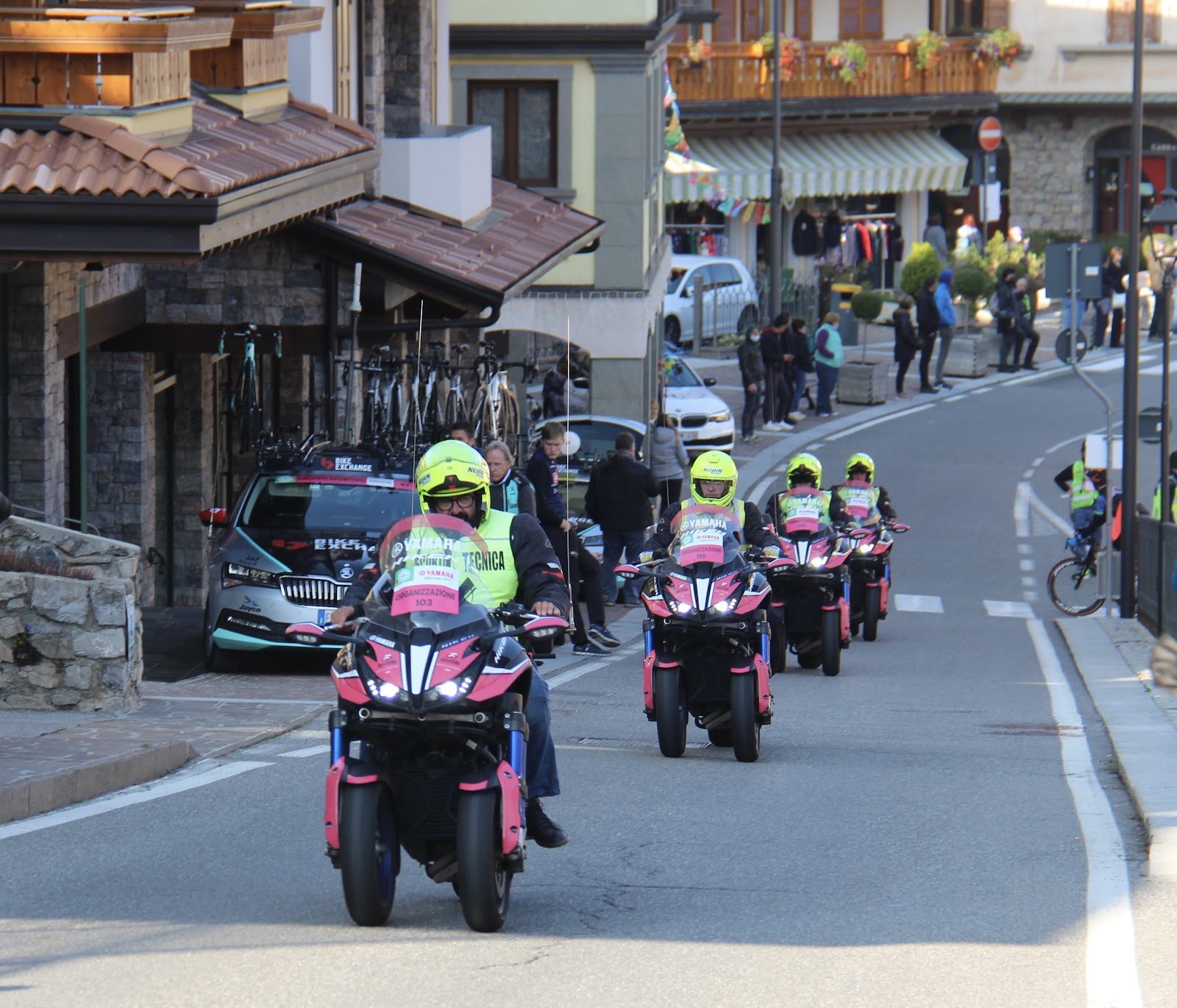 …all alone in front, with a local Italian rider not far behind…

I was shocked at how fast they were all going – they had just finished the last of several very difficult climbs just over 20 km from the end of a very long race and they literally whizzed by us.

A few minutes later another small group arrived that included Daniel Martin, who is retiring from pro cycling at the end of this race – we’ll be sad to see him go…

After the last rider had passed we scooped another bidon – this one from Bahrain, whose car had parked very near us.  They had a bunch of bidons ready to hand out but since we’re so close to the finish they weren’t going to be needed so several fans got lucky.  We then headed back to the bar/restaurant and saw the last few minutes on their large tv.

The locals were all, of course, cheering for the rider from Bergamo so I was rather subdued in cheering when Pogacar sprinted for the win.  To be honest I also would have been happy if Masnada had won instead.

Another wonderful il Lombardia – one of our favourite races.  One thing that we discussed at length later was the behaviour of the eight ‘chasers’ – it seemed that rather than try to catch Pogacar and Masnada and have a 10-man sprint for the win they were content to play catty-mousey and ride for third – kind of disappointing.  Other than that, though, it was a thrilling race through some of the most beautiful countryside around.

One thought on “Il Lombardia – Race of the Falling Leaves”