Had a much better sleep than last night – at least when I woke up from time to time I couldn’t hear any neighbours. Got up early, did yoga and went for breakfast – really good spread and ate a lot.

Discovered that the towel rack in the bathroom was heated so did some laundry in the bathroom sink, hoping it would dry before I checked out at 10:30. Should have done it last night but was so tired I never even thought about it.

The really nice front desk guy (Anil – from India) helped me lug the bike box from where he’d stashed it yesterday out into the courtyard where I proceeded to try to assemble it. Worked on it for an hour, then cleaned out my room and checked out, although Anil said I could stay working on the bike as long as it took, or check in for another night if I wanted. Took me almost 4 hours to reassemble everything – the bike shop had done some really funky stuff to make the fenders and pannier racks fit around the disk brakes, but I think I finally figured it out – guess I’ll see if the brakes fail or the front wheel falls off when I’m riding. 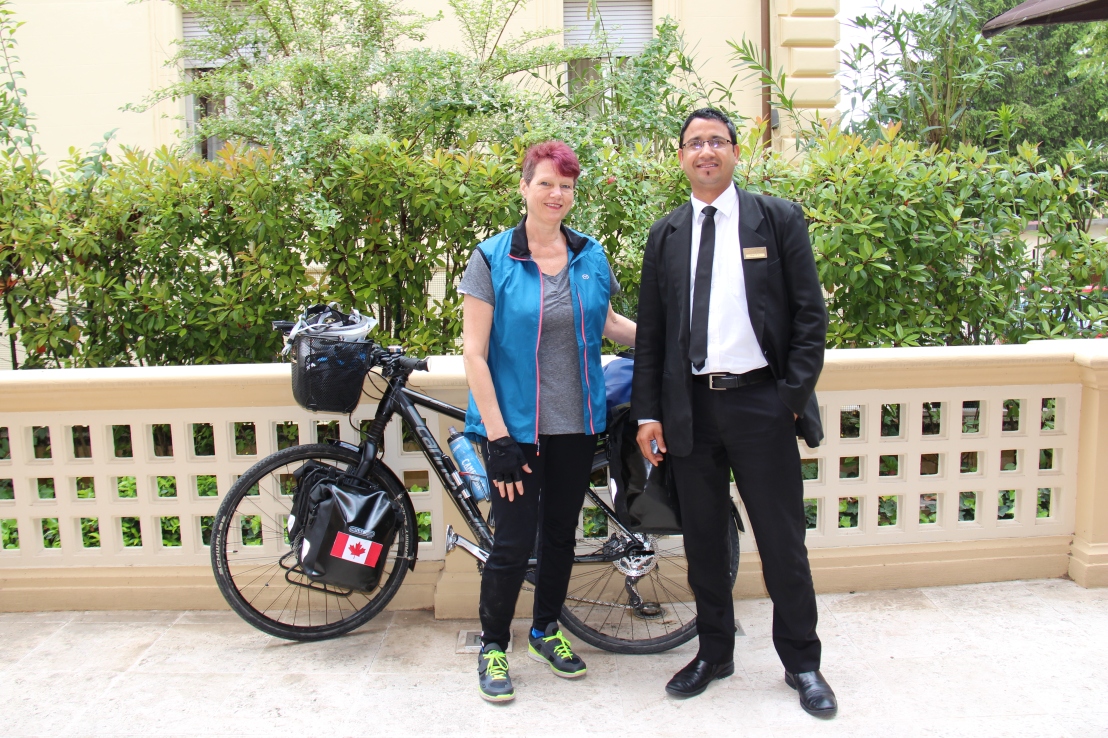 Left Foligno for Bevagna around 1:30, then on to Pian di Boccio around – not a long ride to Bevagna, but very narrow road with no bike lane and the roads are terrible – full of pot holes and other bike hazards. And the cars whiz by without much room to spare. Shortly after Bevagna the road to the campground turns off, and it seems I took the hard way there. Signage isn’t that great and I didn’t read the posting right. The route I took did get me where I was going, but several times I wasn’t sure I was going to actually make it – such steep hills. Pushing the bike was considerably better than dragging it in a box while carrying my camera, two panniers and my camping gear, but after awhile I thought I was going to have to stop and pitch my tent in the woods, but it was so hilly there wasn’t a flat spot to be found.  Tried twice to flag down passing cars, but they didn’t seem interested in helping.

Finally found the campground, and, of course, just after I checked in and was about to setup my tent it started raining. I got the ground cover down with the tent on top and managed to get the poles together (luckily they are kind of all in one piece with elastic or something between them and almost snap themselves together) when it really started pouring. By the time I got all my gear inside and pegged the corners down I was soaked to the skin.

Most of my clothes are wet now – the ones I washed at the hotel, plus the ones I was wearing setting up the tent – oh well, at least I have a cozy black blankie and sleeping bag and my tent is large enough to sit up in without having to duck or crouch.

Face-timed Dom – god, this is so different than the last time I travelled in Europe! Sly-guy was there and again recognized my voice – he purred so loud I could hear it. Also, the thunder from the storm going on around me was so loud Dom could hear it.

Went to the check-in desk again and the very nice lady (Luisa) opened up the bar/store for me and made some hot water for tea and I got a bottle of wine. Back in my tent drinking cups of hot tea alternated with cups of red wine. Playing Italian songs on the ipad and doing Kakuro puzzles. Might play some solitare later – how exciting!

At least I’m here, and I got my bike and put it together – feels like I accomplished something. And tomorrow (or the next day) will be sunny and I’ll ride around the area a bit and explore. Actually reminds me a lot of the Okanagan – very beautiful, wide valley between hills/mountains, with lots or orchards (olives rather than apples) and I can’t wait to see more!