Got up at 5:15 – couldn’t sleep for many reasons – roosters, goose, ducks, but the last thing was the train whizzing by just beyond the campground’s hedge. Had another nice hot shower, and finally did yoga – first time in days, right in front of the lake, nice and peaceful. Mr. goose came over to watch for awhile, but didn’t bother me. 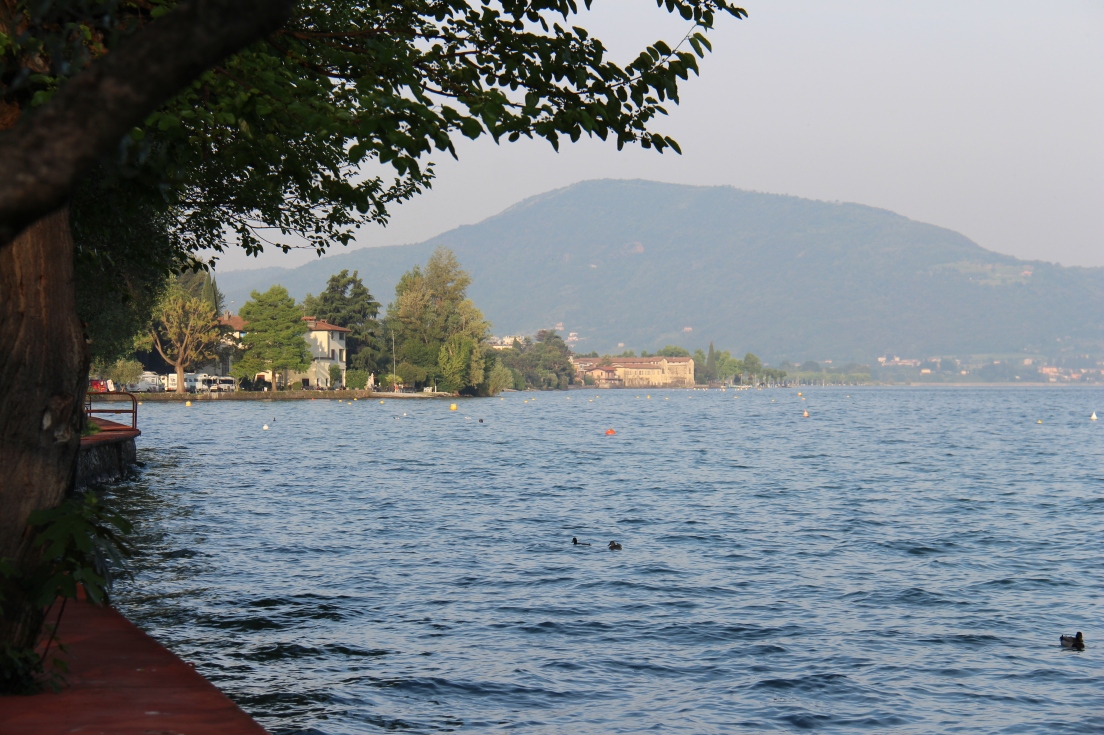 Packed up the tent and got all my stuff ready – when Colin got up made some tea and had a nice breakfast. 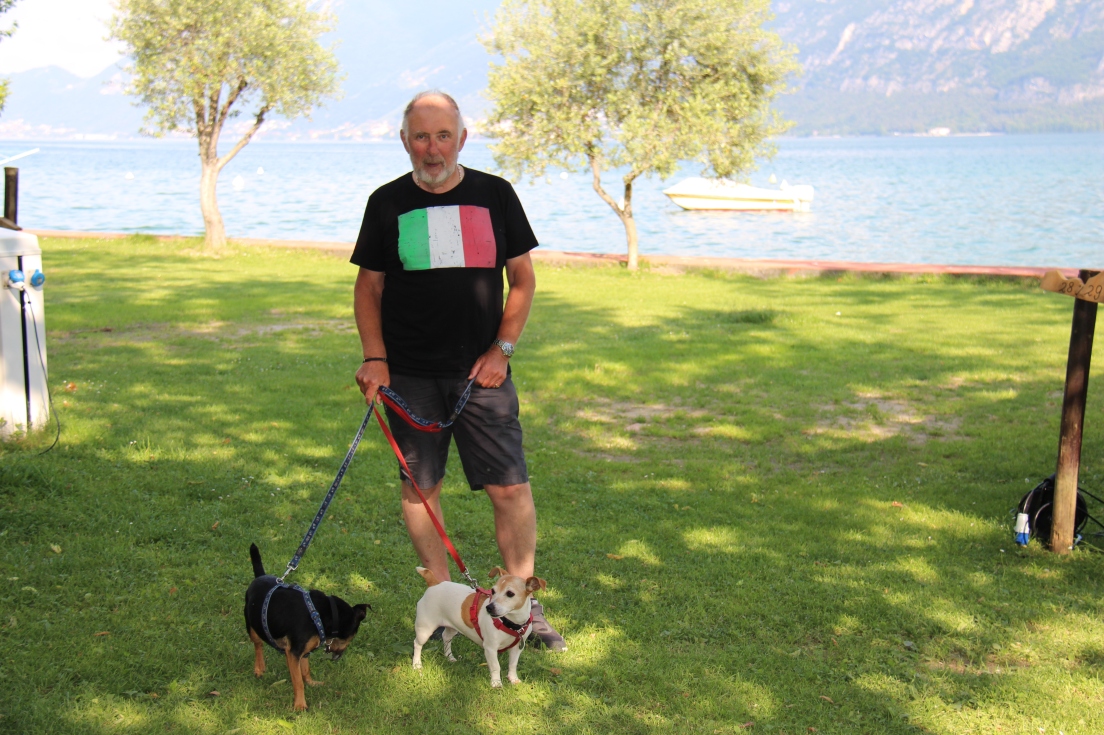 Left around 10 to 9 – stopped at a farmicia for more cortisone cream. That stuff is working wonders on the sun-blisters – they’re almost gone and hopefully won’t leave any lasting marks.

Short drive to Brescia, where Colin dropped me off right near the station. Said goodbye (for now) and he left. Hopefully we’ll meet again in France and see a leg or two of the Tour in July.

Asked a couple where the station was (in Italian!) and got my ticket to Trieste – actually two tickets – one for me and one for my bike. Waiting almost 2 hrs for the first train – have to change twice – once in Verona and again in Mestre. Made sure to verify my tickets!

I stood up the whole way from Brescia to Verona holding my bike up in front of the doors – luckily there was only two other stops. Then of course I had only six minutes to change trains in Verona so had to run for the elevator to go under the tracks and over to the next ones. A very kind lady let me go ahead of her (and her baby in a stroller and a toddler) when I told her I had 3 minutes to catch my next train. Could barely fit the bike in the lift but managed to squish it in. Ran like mad and reached the door just after it closed – no amount if pressing the button would make it open. Watched as it pulled out to the sound of my cursing.

Found another train listed in the ‘departures’ board so back to the elevator, down, over, up – right back where I started from. Read the electronic display, and discovered that the track listed on the other board was wrong, so had to hustle again (down-over-up) to yet another track. Finally the right one – train was sitting there. Managed to get my bike up (about a foot and a half) to the area between cars, only to be told that I had to put the bike in the first car of the train (even tho there was no-one on the train). She told me I had time to move, so I lugged the bike down ran to the front car, and was having trouble lifting the bike again. A very nice girl rushed to help me, then the conductor put the bike’s front wheel on a hook for me. Had to take all the bags off, but I get to sit on an upper deck looking down on the bike.

Powered up the ipad, the charger and my keyboard with the train’s plug-ins. Caught the next train to Trieste with a few minutes to spare. Ticket checker came aboard my car just after the second stop – eveything ok this time!

Got to Trieste an hour later than I should have because of the missed second train. Went directly to the ticket office to see about getting to Split, Croatia, only to stand in line with 12 or 13 other folks while the two open wickets assisted two people for over 15 minutes before a third wicket opened. Finally another person came over to the lineup and I kind of butted in and asked if there were any trains to Croatia. He said no, you have to take a bus from the next building – not the info I had looked up online before, but it’s their train service. Pushed the bike next door, and a man in front of the bldg offered to help me. The ticket agent said I’d missed the last bus of the day by a few minutes – thanks to the two boneheads in the train ticket office.

Then the ‘helpful’ man led me around to 3 different hotels – first two were full, third more like a hostel with shared rooms, although no-one else is in mine. The kindly man then proceeded to ask for ten euros for his help! Was too tired to complain so paid him to go away. They agreed to let me keep my bike in the room, rather than locked to a grate in the hall. Looking forward to checking out in the morning and heading to Croatia. Hope I can sleep – traffic is pretty loud.