Slept well – got up a little earlier than yesterday – had another nice shower. When I was about to leave the shower area an older lady was having trouble getting hers going. There’s a little machine that you have to put your blue bracelet on and pick your shower stall to make it work. She was trying to activate it with a yellow bracelet (for laundry, I think). Her husband was there trying to help her, but neither one spoke English and they just didn’t understand the colour problem. I just pressed my magic blue for her and chose number 3 – then had to show her what stall 3 was – hope she had a good shower!

Tried to do yoga in the sun on the beach. Was just finishing my warm up and chi-gong when a truck pulled up (on the beach!) and three guys and a big dog got out. Then the couple above me finished their breakfast and both lit up cigarettes. Back to my tent area and did yoga there under the trees.

Little black kitty joined me for breakfast outside my tent – he’ll eat as much as I’ll give him, and still beg for more. 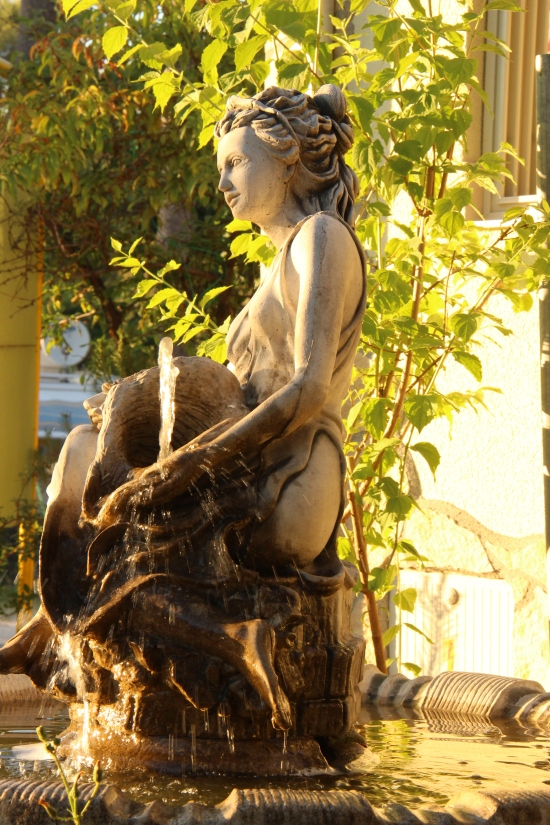 Pumped up my tires, then went for a nice ride to the town across the bay – not very far, really, although on a busy road. Rode on the sidewalk, that turned into a dirt path of sorts. My tires are taking a beating – the sidewalks don’t always have nice slopes when a road crosses – some of the drop-offs are 5-6 inches high (not sure how a wheelchair would do!). Rode thru the town until the sidewalk ended – didn’t want to fight the traffic for space so turned back a bit then went up some really quiet streets (except when I passed a school – obviously break time and hundreds of teenagers on the road and all over the place).

Ended up on a road that went up into the hills to another town or two – rode up until it started going downhill, then turned back. It was starting to get hot, and I wasn’t covered up enough from the sun – my arms are almost back to normal and I don’t want them breaking out again.

Turned into one of the towns-on-the-hill and rode along a ‘river’ for awhile, then followed the road that went along the hill from town to town. Got back on the main road and returned to the campsite. There’s some Roman ruins somewhere around here – I’ll have to get better directions and visit in a day or two.

Back at camp had a cup of tea on the terrace, then to the tent for lunch – kitty joined me again. I wonder if he’s watching for me now. Fed myself and kitty – he’s comfortable enough now to stick around for a bit and groom himself before leaving for more shade (under the van next-door). I told him to come back for dinner, and I’m sure he will!

I’m so glad I brought the solar panel – haven’t really needed it until now. At Pian de Boccio they were always happy to charge up whatever I needed in the office, and Colin’s van always had power for charging. The WC’s at this campsite do have plug-ins, but I’m scared of the beady-eyed cleaning lady confiscating my ipad for un-authorized use of their electricity. It’s almost always sunny here so it’s not a problem.

Moved my tent a couple of yards further under the trees – every afternoon around 2:30 the sun hits a gap in the trees for a couple of hours and my tent heats up like an oven. Took about a minute and a half to move – just took my panniers out and pulled the tent and what was left inside over several feet. Hopefully won’t get so toasty.

Discovered that little black kitty is two-timing me! I saw him walk past as I had just finished a face-time call with Dom. When I called to him he kept walking, instead of coming over like he usually would. He went up to a nearby cabin and as I followed him a young lady came out – I asked her if she was feeding him too, and she said ‘a little’. 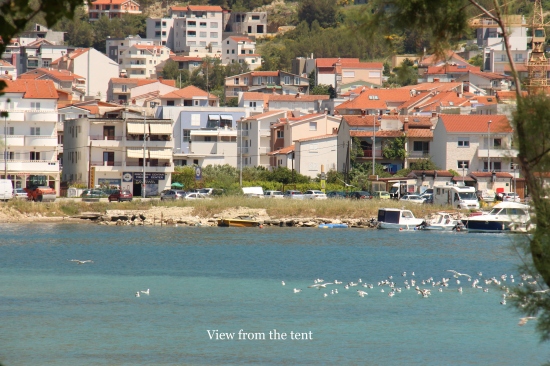 Went back down to the tent – kids in the play area are really loud and overly screechy for some reason. Little kitty came down a bit later and had some more food – chicken (I think) this time.

The children’s playground right above me has become somewhat quieter – thank god. I don’t mind the sounds of kids having fun, but it seems that some of them just shreak and cry for no reason other than to make noise or get attention. The heat is waning a bit as the sun goes down – another lovely evening.

A couple of cars have pulled in – glad I moved my tent so they have room. Not enough tent spots – but I’ve got dibs as I was here first!