Up nice and early to pack up all my gear. Hung the tent, fly and ground cover to dry and air out while I ate breakfast. Walked up to the ATM for cash to pay my bill, and got the German guy that arrived yesterday to take a pic of myself and Nedzad. Found out there was an earthquake last night just after midnight – didn’t feel a thing. One of the straps on my right flip-flop came out from the sole so I glued it back on with my tire-patch repair kit glue – hope it holds when I want to wear them later.

Got on the road to my next stop just after 9:30. The 1 km along the main highway wasn’t actually too bad – it wasn’t quite so windy as the first time I rode (without all the gear) so I didn’t feel so unstable. The Ciro is really nice – paved a good part of the way, then dirt/rocks for the middle bit. It runs along the Neretva river next to the new railway line. 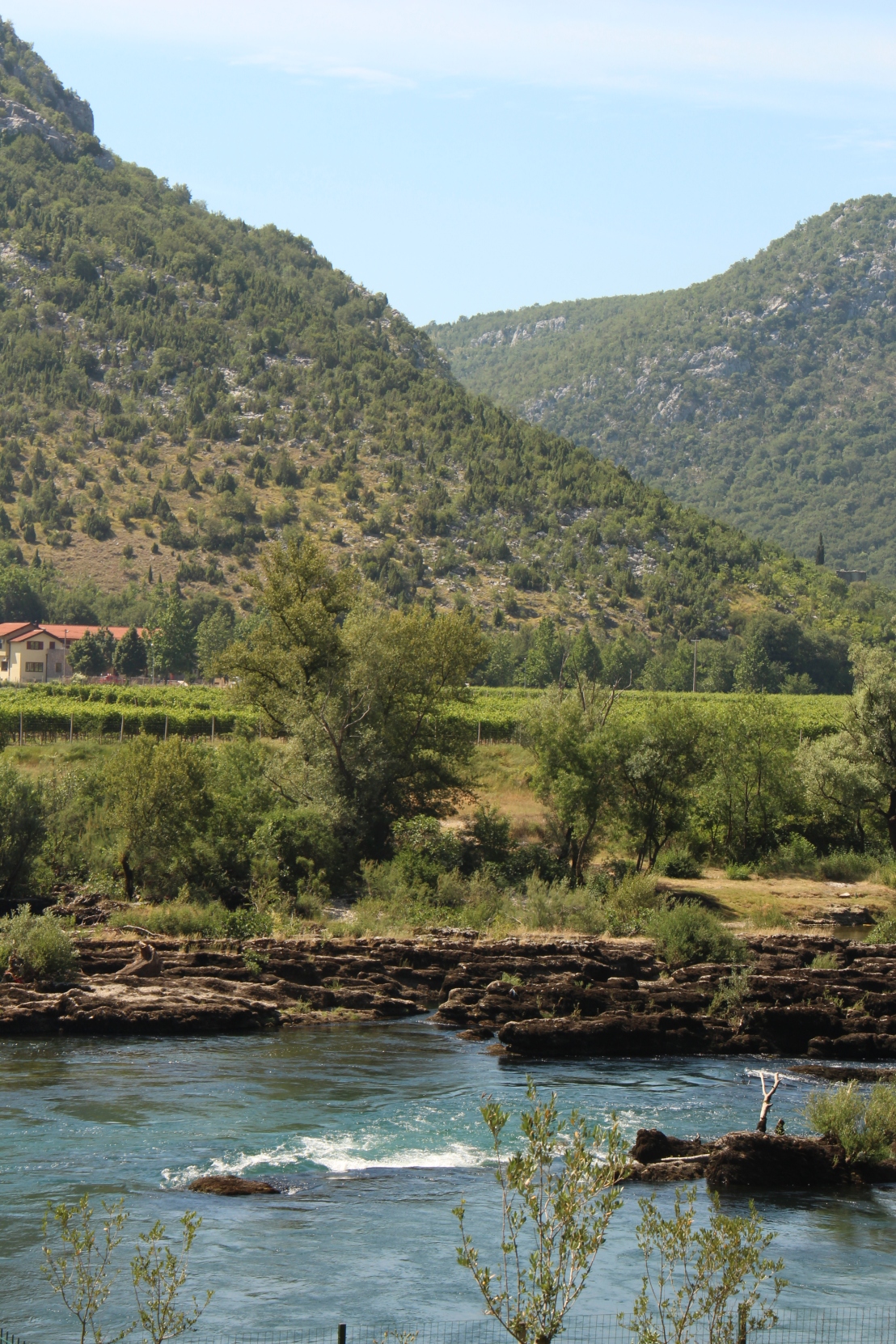 Right at the town of Zitomislici the road continues straight but the Ciro veers left, than right again along the river. I stopped and asked a guy in front of a supermarket where the campsite was and he indicated I needed to go back to the road and up and over the bridge to the other side of the Neretva. Found signs at the other end – part of the campsite is under the bridge, and along the east bank of the river. Took awhile to pick my spot, which Sandra (the owner?) cleaned up for me – raked leaves, etc. While she did that I sat up on the terrace where there’s a bar and a bunch of picnic tables. Had two cups of tea (my own bags – all they have is fruity ones) then put my tent up. Could hardly move when I got up – arms are really sore from steering on the dirt/rocky part of the trail/road.

Had lunch on a lounge-chair outside my tent, then took a really nice shower – I was filthy from the dust and sweat. Feeling human again went back up to the terrace and had the ice-cream Sandra had offered me earlier – very refreshing.

Sat on a lounge chair for awhile looking at the river – someone across the river is clearing weeds or grass:

Just as I was cutting up veggies for my dinner the thunder started and very shortly after the rain came. Brought everything inside, except the campstove, of course – cooked soup in the rain, then ate in the tent.

I’m not used to spending so much time in the tent – the place at Blagaj had a nice sitting area under cover that we got to use, in addition to the kitchen.

Could see lightening from inside the tent, and it was pretty close – the thunder wasn’t very far behind. Was settling down very early when I heard Sandra calling me – she was very worried about the storm and implored me to spend the night in the camp’s motorhome (no charge). Grabbed a few things, including my sleeping bag and moved in quickly.