Said goodbye to Mirza and Saed right around 10 and rode to the bus station. A little old man at the bus station recognized the maple leaf on my pannier – I couldn’t understand anything he said other than ‘Canada’ so he pulled out his wallet and showed my an address label for someone he knows in Burnaby! Checked out the train station next door – no trains from Sarajevo to Italy, so back to the bus station.

No problem with my bike this time, although the two drivers were about to remove the front wheel when I stopped them just in time. They decided to use the larger bay instead and bike and bags all fit nicely. The trip was long and the bus, which started out with only 4 of us on board, was almost full by the time we got half-way to Zagreb.

The first part of the trip was thru lots of mountains, then about half-way the mountains ended and it got very flat, although you could see hills in the distance.

A little lady sat down beside me and fed me crackers (very salty) and chocolate mints. She didn’t speak any English, but was very sweet. About six hours into the trip we passed about a mile of semi-trucks all sitting on the highway, and even on the on-ramps from other roads. I wondered if there was an accident or something, but cars and even our bus were passing them very slowly and carefully using half of the oncoming lane. Turns out there was no accident – all the trucks were in line to go across the border to Croatia. Our bus stopped and a Bosnian guard got on and took all of our ID’s away – got them back in 15 or 20 minutes. We then drove across a bridge and stopped again, this time all disembarking and going one at a time to a guard’s window where they took the ID and scanned it (I think – that’s what it looked like from outside the guard shack) – got a stamp on it too.

After the border crossing we drove about 1/2 mile and stopped at a cafe so the drivers could have some coffee. Time at least to buy some water and a sandwich (chewiest bread ever!) and use the WC.

Finally arrived in Zagreb just about on time – around 9 at night. I immediately went to the ticket place and asked about buses to Italy – next one is at 2 am to Trieste. Since I had time I then rode to the train station – eventually found it after stopping several times to ask people for directions. The ticket window for international trains was closed until 6 tomorrow morning, and the bus I asked about will be in Trieste by 6:40 so decided to take the bus.

There was a concert in the large park across from the train station – some opera, I believe, and hundreds, if not thousands of people watching for free. 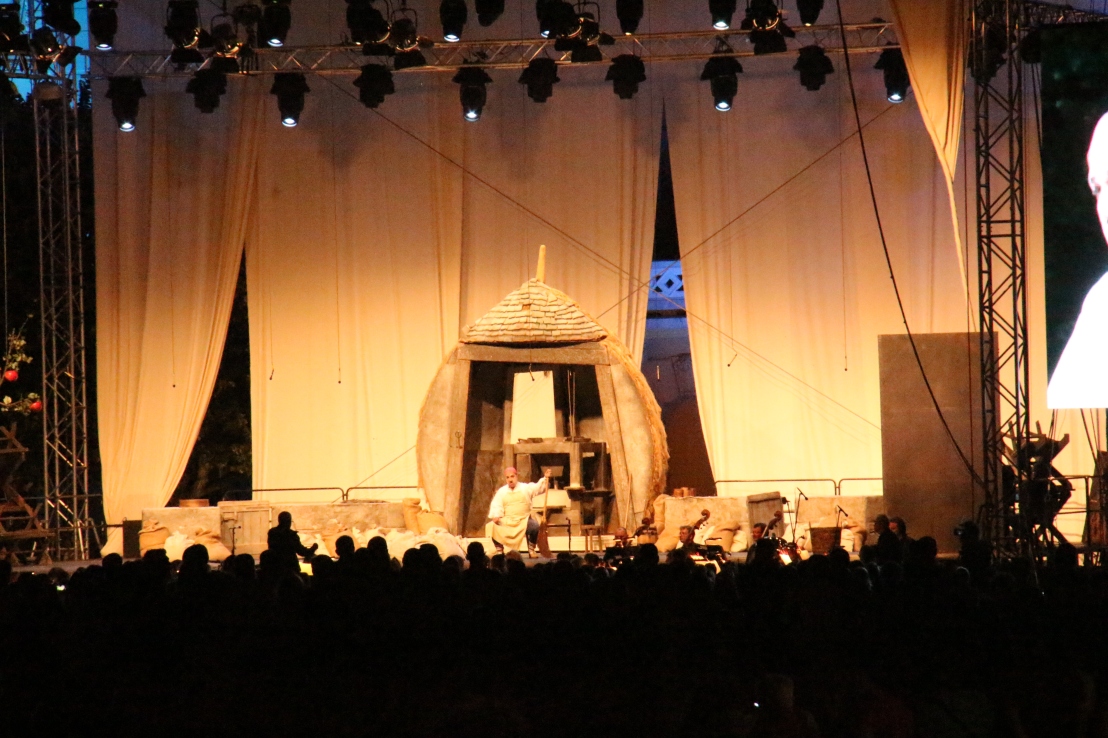 I didn’t watch too long as I was worried that the bus ticket window would close so went back and bot my ticket. As usual they couldn’t tell me if my bike would get on, or how much it would be – seems completely up to the drivers. I hope that since it’s a night bus it won’t be so full and getting the bike on won’t be an issue.

Got a cup of tea at an all-night cafe at the bus station – pedestrian ‘walk’ light has a bell that doesn’t stop beeping – it’s driving me nuts, but also keeping me awake so I’ve been sitting here for an hour and a half so far.