Woke up early thinking the day was going to be overcast, but when I peeked out the sky was clear blue but the sun hadn’t cleared the mountain peak yet. Didn’t sleep too bad considering there was a large lump right under my back on the right side – it’s not a rock or I would have noticed before I setup my tent. It was fairly chilly but my sleeping bag and black blankie kept me toasty cozy.

Colin and I took the doggies for a walk up the hill where all the hikers head – and there’s lots of them, groups of 20 or more, as well as people on their own. 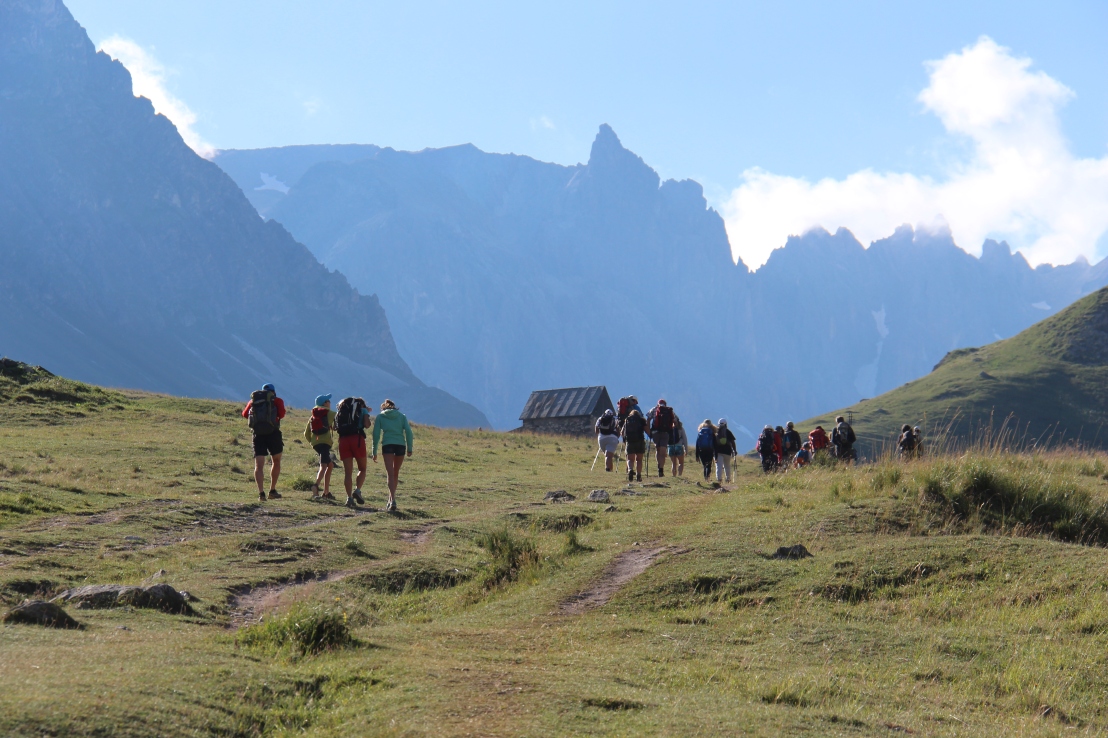 I had my merino wool sweater on and my warm hoodie, but other folks were in shorts and t-shirts – the wind was fierce and those guys must have been freezing. Colin turned back after a bit and I took the little ones further on my own. I walked higher up than I had thought, just following the creek – when I looked back the way I’d come I was way further up than I would have guessed. 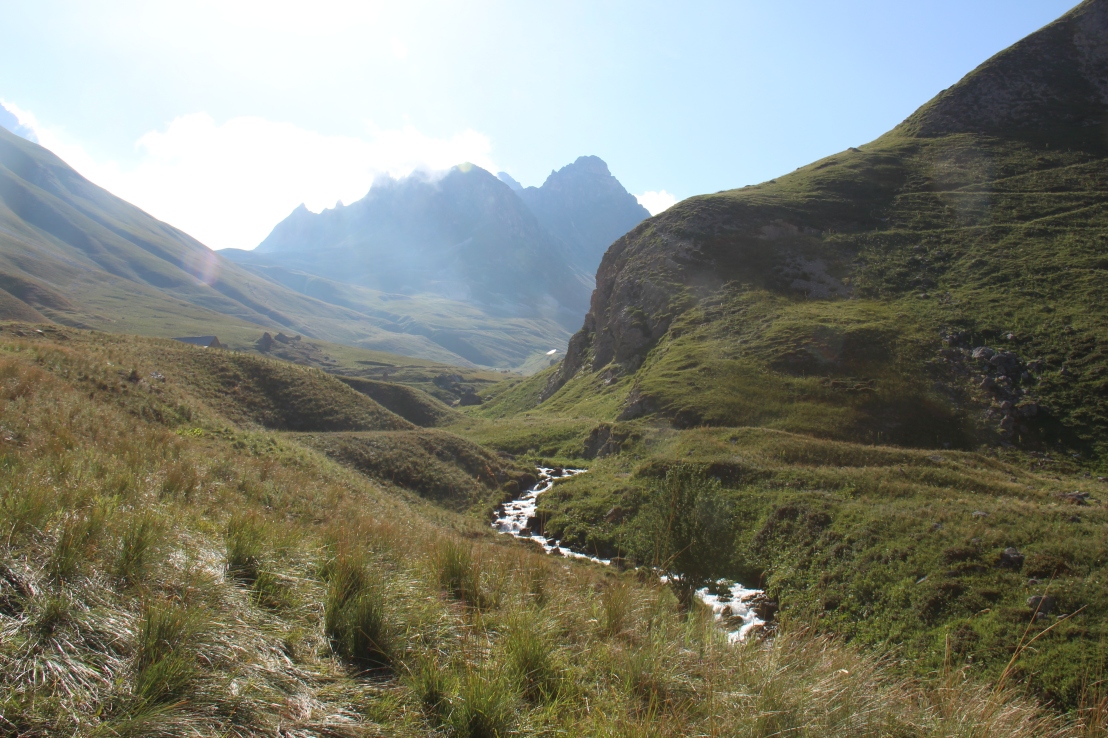 Took a slightly different route down and went ‘cross country’ for the last bit back to the campervan.

Had a lovely lunch of tuna salad, then watched the sheep for awhile. They were grazing on the hill on our side of the road – the sheep dog didn’t like it when they got too close to the road, and can he ever get them moving when the sheepherder wants him to. 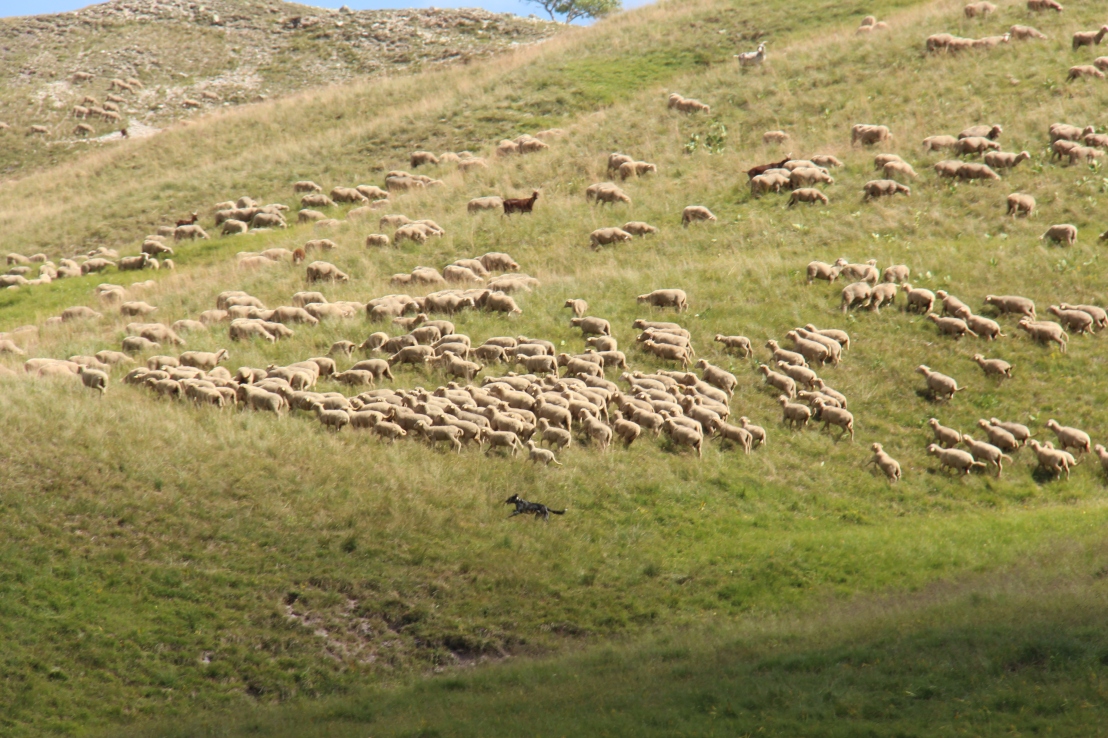 Went for another walk, this time by myself. I crossed the road and walked down to the creek, trying to find a way across to the trail on the other side that I could see. Couldn’t find a way across, at least not without getting soaked, so stayed on my side, following the creek until the banks closed in. I made my way forward following the sheep trails onwards and upwards until I was close enough to the road to goat-climb up to it. Walked a little further on the road to the next corner – another valley opened up and the road still headed down.

Back near camp I saw a van trying in vain to get thru the parking lot to the field on our side of the road – I told him if he could get one of the cars on the other side to move there was plenty of room in that field to setup. He parked his van half on the road and went to find the owner of the car that was blocking the entrance to the field. He did find someone, although it wasn’t the car we thought should be moved – we were sure the campervan would bottom out and not be able to get onto the field, but he managed it. Several of our neighbours were also watching the manouvering and were also surprised and impressed with the success – I feel like we’re a bunch of little old ladies on our porches watching everything that happens in our little town and commenting and gossiping about it!

Another of our neighbours brought over a tiny little kitten that she has agreed to take care of – her son found it – I think on a job site where a bulldozer was just about to scoop up him and his siblings. They stopped work and rescued 3 or 4 very young baby kitties and she agreed to take one. She’s feeding it with a tiny bottle and it’s so young it’s eyes are just starting to open. It’s an all black male and he snuggled close and started licking and ‘kneeding’ my hand – he was so cute!

The group of folks across the road from us are still using one of their cars to block the way down for anyone else, although a couple of smaller cars have squeaked thru. One of our neighbours went over to help one vehicle – the owner of the ‘blocker’ car is pretending he doesn’t know it’s a problem – they even came and closed their hatch and scampered back to their tent rather stealthily (although I saw them).

Our closest neighbour came over with a bottle and insisted I have a swig – I got a glass instead and he poured a little into it and watched while I tasted it. It was awful – tasted like pure alcohol, perhaps aquavite or something. I saved the rest for Colin.

Some of the French folks not far from us were playing music – Colin walked the dogs over to see what’s going on. He said they’re very nice, but he didn’t want to stay longer. I, of course, wanted to join the party so went over and introduced myself. One of the older fellows took me under his wing and made sure I met many of the others, including one guy that spoke fairly good english. Whenever I was standing alone one or more of them would come and talk with me. They didn’t all remember my name, so would call out ‘Canada’ to get my attention. One guy was stirring a huge batch of paella – rice, sausage, chicken and huge shrimps. I sat down at the table with them – they told me I was welcome to join them – and they kept filling my cup with rose wine. It was such a good meal, and great company – I’m so glad I wandered over and invited myself!