Another gorgeous day – windy as usual but clear bright sky – perfect for watching the race. I took the little ones for a walk after breakfast and can’t believe how many more vehicles and tents there were – hundreds and hundreds of people in our field and lined up and down both sides of the road. Some vans and cars are so close to the edge I’m surprised they’re not rolling down the mountainside. 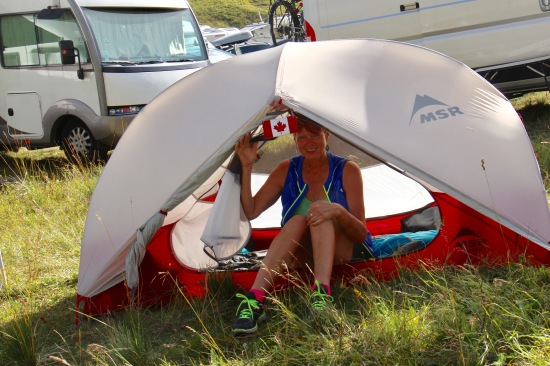 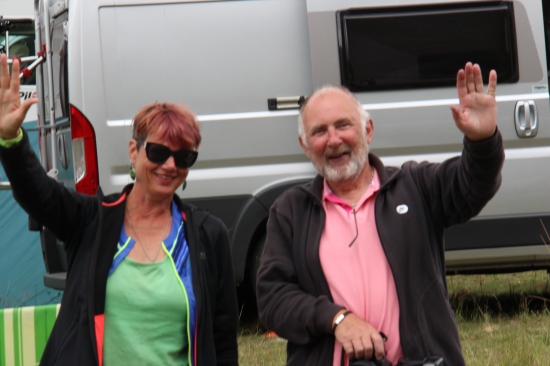 Still hundreds of cyclists going up and down, and people walking up the mountain for a better view. We’re in a perfect spot – no one can get in front of us and we’re a little above the road, although I’m sure we’ll move about a bit once the racers reach us. It’s a very festive atmosphere already and the cavalcade hasn’t even started yet.

Clouds rolled in and rain began – light at first, then quite hard. Vans were going up and down selling Tour de France umbrellas, hats, shirts, bottles, etc. Rain stopped after a short bit, although the clouds were still threatening. Ate lunch at our table and chairs at the roadside – Frenchman on our right gave us some home-made salami that was very tasty.

Sometime after 3 the cavalcade began – and was it ever fun! All sorts of cars with huge mascots and people throwing freebies out at the crowd – I went wild!

Between Colin and myself we ended up with quite a haul – I was diving for stuff, while cradling my camera in my right arm like a rugby player protecting the ball. I’m not even sure what we got, but it was free and it was fun.

Within about a half hour we started seeing the helicopters coming, and saw on tv that the riders were starting the climb. As soon as they rounded the corner below us we could hear the crowds cheering.

The riders were really spread out from the previous climb, so took a long time to pass. We were on a bit of an almost flat spot between the climb below and the zig-zag climb above – many riders looked over their right shoulders to the upcoming hairpins they had to face – not happy thoughts for most of them.

As they progressed up the hill we could hear the crowds that lined the road going crazy – sound travels well down the mountain so we could always hear the very enthusiastic fans. There were at least 8 helicopters overhead at one time.

The moment the last rider passed and the following vehicles got by, with the big yellow BIC schoolbus being the last, the fans started dispersing – vehicles, bikes, pedestrians. At first the gendarme at the end of the parking lot below us was controlling the up/down/out traffic, but then she left and everyone that was moving was left to fend for themselves. At one point two motorcycle cops led a couple hundred cyclists down in a group.

The rude folks across the road continued their trend – the most vocal bitch vented at a couple of Dutch vans that were leaving – she called them disgusting pigs for leaving waste, although they vowed that it wasn’t theirs. One Frenchie tried to open the back door of the van, and the loudmouthed one kicked the van at least three times – what a sorry bunch – can’t wait until they leave. They were still going on about it well after the Dutch guys had left.

Watched as about 95% of the other campers left – the folks on our right kept their chairs right out near the road and watched same as they did all day – fairly entertaining, actually. Had a look at the pics I’d taken – some not bad ones of Contador, Froome and Quintana, as well as other riders that Colin will have to identify for me.

Tried to get an early night but a few of the remaining campers were having a chat-fest not far away. One of them kept saying ‘hush’ but that only made one of the others louder. Then the rain started to pound and the wind picked up again. I’m cozy enough inside the tent but everything’s going to be soaked when I pack up in the morning.