Had a really good sleep until about 3 when the howling wind and pouring rain woke me up. The rain came and went and I was warm and dry, but the wind was fierce. At times the top poles bent so far that the side of the tent was blowing in and touching me. I had done a good job of pounding in the stakes so the tent wasn’t blown away, but I was very concerned a couple of times that the poles were going to give out and the tent would collapse on me, or else the seams would burst from the power of the wind.

I must say that I’m very impressed with both the design and the construction of my little tent – it held out against the gale, and I fell back into a fitful sleep around 6.

Packed up quickly as the rain clouds were closing in again – the ground cover and the fly are a bit wet from the night’s storm, but got everything put away just as the rain started again in earnest. On the road around 9.

Passed out of the Ardeche and into the Haute-Loire fairly early – saw the very beginnings of the River Loire where it’s really just a very small creek. Not very far later we passed over the river again – much, much bigger now.

And there are Tour displays everywhere around this area as there was a finish, a rest day, and a start at Le Puy-en-valey. 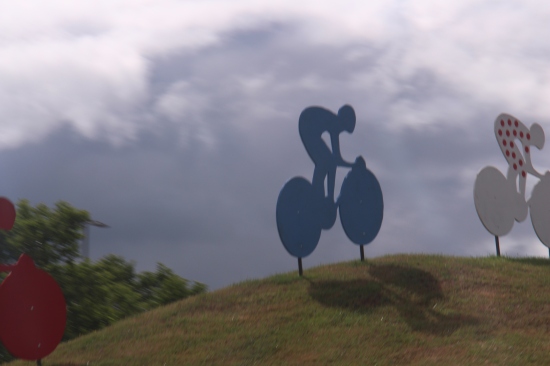 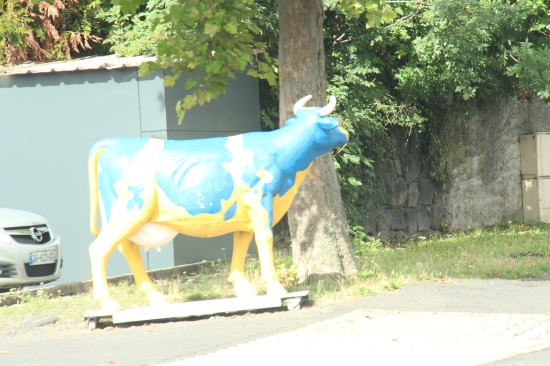 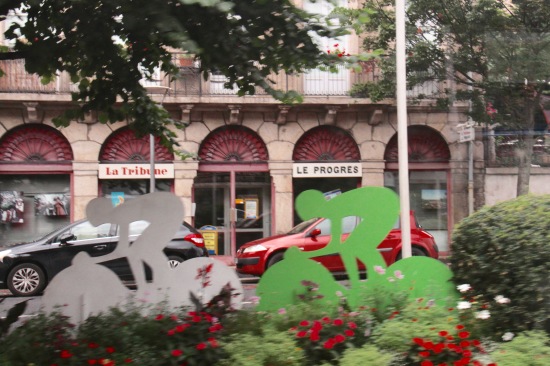 Went northwest, then southwest to the city of Aurillac, then tried to get to a small campsite Colin knew of just north of the city in the village Jussac. Took a couple of wrong turns and backtracked once or twice, but between the two of us with our good sense of direction and his very detailed map book we found it.

Campsite was closed for lunch, but that was ok – parked the van (used their loo) and took the doggies for a little walk, and then let them run free in the football (soccer) field next door. They are so cute when they run – Mo especially, as she almost hops rather than runs when the grass is a little long. The campsite is really nice – surrounded by a creek that splits right around it, so almost an island.

Checked in when they reopened after lunch (at 3:30!) and set my tent up as the clouds were looking grey. Had a really nice hot shower, then went for a longer walk further than the football field. There are tennis courts, as well as an outdoor theatre that was setup for a play – they had a bunch of little medieval-looking houses and other buildings all ready to go.

There was also a marsh with an old, now closed, wooden path and sign-boards telling about the various insects and plants.

Got back to the van and we took the dogs for a walk into the village, intending to maybe get a drink and a small bite to eat. Nothing was open – either too late for lunch, too early for dinner, or closed because it’s Monday – typical of a village in France, I guess.

Went back to camp and made our own dinners – I had the last of my dried soup packets that I bot in Bosnia and Herzegovina, and Colin had fried eggs and bacon.