Rain rain go away….had to wait until afternoon before the rain stopped and I could go for a ride. Went into the city centre via the most direct route, which meant riding on the sidewalk part way down. Most folks, as usual, were happy to let me pass without having to ride on the road, except one fellow did have something to say as I went by him. He didn’t try to impede me however, so I just ignored him and kept going.

Right as I was nearing the centre a car was pulling out of a parking lot and didn’t even look for anyone – if I had been walking she wouldn’t have seen me either. She pulled her car right across the sidewalk but couldn’t get onto the road as traffic was coming. I stopped, of course, and waited for her to either back up so I could pass – although she didn’t even look at me, so that didn’t happen – or pull onto the road. Finally there was a break in the oncoming traffic so she did pull out, but she proceeded at such a sharp angle that she almost ran me over – I actually had to back up to avoid getting hit. I yelled a couple of choice expletives at her (first word started with ‘f’ and second with ‘b’) but I’m sure she didn’t hear me any better than she’d seen me.

I got off and walked the bike for a bit – luckily part of the centre is closed to traffic so was able to ride again after a couple of blocks. I had looked up health product stores before leaving, so tried to find the first one without luck. I found the shopping centre it was supposed to be in, but couldn’t find the actual store so went to the next one on my list – only a couple of blocks away.

Got what I needed – soap, shampoo, toothpaste and oregano oil (in capsules, rather than drops, but better than nothing). Rode around a bit – the old part of the centre is really great with lots of pubs and small shops.

I stopped to consult the ever-handy map and then noticed that I was in front of a tattoo parlour. I considered going in to get my existing tattoo embellished, which is something I’ve wanted to do for some time now, but decided to wait for another time.

Rode to the cathedral – approached it from the back, where they’re doing a bunch of stone-work. I followed a paved path, hoping it would lead around to the front but ended up in a fenced area where all the stone was kept, and where several workers were. I asked if the path continued and was told no, but I could get through a gate which he then opened for me. 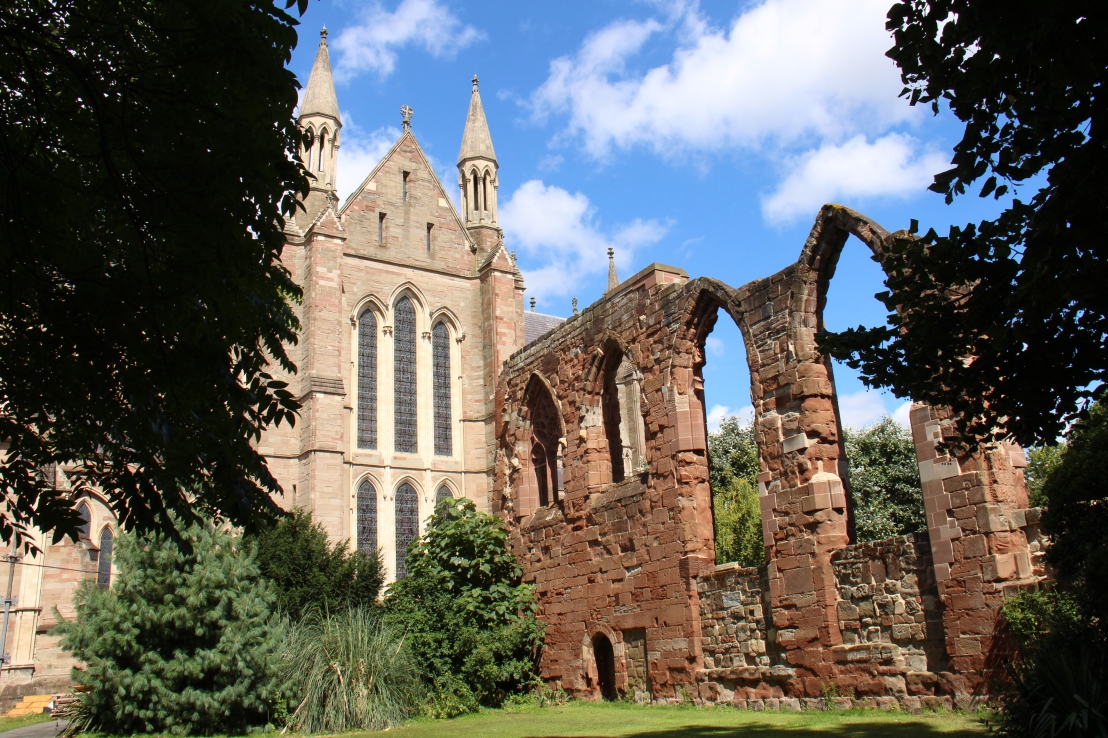 Next I rode to the canal, then along the canal-path all the way north, then east, until I left it at the forest path that leads home. I’m getting familiar with the various paths now and have no trouble finding my way even if I take a slightly different route sometimes.

I had to kill a fairly large spider although I did apologize as I whacked it repeatedly with a shoe. It had been in a corner of the stairway and I had left it, reasoning that it was catching flies or other bugs and that was ok. Then as I was watching tv later I saw movement on the floor and there it was – scuttling across right in front of the tv – it gave me no choice!