Got on my way for my ride just after noon. Headed north on the paths, then northeast when I reached the canal. There are more people today than yesterday – both walkers and cyclists.

Passed several ducks on the grass between the canal and the path – they were all ‘roosting’ and didn’t even move when I approached – at first I almost thought they were rocks. They didn’t even twitch as I passed – obviously not shy of people.

Sky was very cloudy but didn’t seem that threatening – I’d looked up the weather forecast and tomorrow and the next day are supposed to be crappy so I figured today was probably the best day to ride until mid-week.

Made it to Hanbury (where the Droitwich canal meets the Worcester to Birmingham canal) in around an hour, then rather than going west about a mile into the town of Droitwich I continued north/northeast towards Birmingham.

Every once in a while one of the locks has a building – I think they used to have folks that would monitor the canal and help with the locks, but now are houses.

Rode another 1/2 hour to the town of Stoke Prior that looked very pretty. There were quite a few canal boats moored, and houses and pubs right next to the canal. I knew I’d have a fairly long ride back home so turned around there. 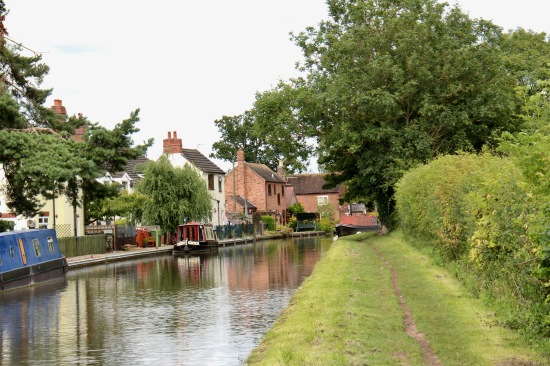 At one point I came upon two dogs coming towards me with no people in sight. They both had collars on so I figured they weren’t wild strays – one was a slim mid-sized beize dog, the other a rather chubby jack russell. They completely ignored me, and as I passed them I could hear voices coming from a boat on the canal – I couldn’t see it because the reeds and other bushes on the canal’s edge were too tall. The dogs seemed to be keeping pace with the boat, so I guessed that they belonged to the boaters and were just being given a chance to stretch their legs a bit.

The wind was picking up again so I was glad I’d turned around when I had. I was getting pretty tired by the time I got home, and rain was threatening again – good timing today. ‘Young’ Neil popped by to confirm the timing of giving me a lift to Cheltenham on Friday to catch the train to Bristol.

The rain started in earnest around 7, then slacked off, then started to really pour just before 9 – dirt paths will all be pure mud tomorrow, so I’m very glad I took the ride I did today.