Got going at a decent time – just after 11:00. I intended to just ride over to a health-food store that I’d looked up online and pick up some vitamins, but there was no store anywhere near where it was supposed to be. I then decided to ride down into the city centre and go back to the store I’d gone to a few days ago, so I rode over to the canal, which wasn’t far away, and headed down.

The clouds began clearing a bit, but the wind had picked up. I rode until the canal path ended (right before the river) then had to go on a road for a tiny bit before I found another path thru a park. I followed it past a nice large playing field, then it veered west thru bushes and wildflowers to the river.

There’s a new pedestrian/cycle bridge over to the other side, where there’s an amusing-looking arrangement of sculptures of men (one with a bike!).

I ended up passing a woman with two little girls, as well as two teenagers each with a large dog, three times as I kept stopping to take pictures and they would catch up and walk past me. We all laughed the last time I called out ‘bicycle – again’ as I rode by, and one of the guys joked ‘are you following us’?

I was going to ride north along the river then cross back into the city centre, but saw a sign indicating that the town of Lower Wick was only a short distance away by cycle path, so I thought – what the heck – I’ve come this far, and followed it.

I passed thru part of the town, and saw another sign that the ‘old Powick Bridge’ was very close, so again kept riding. The bridge was at, or near, the site of both the first skirmish and the last major battle of the English civil war that was between 1642 and 1651.

I knew I was very close to Powick (where I’d been last week, but didn’t see the church) so once again thought – I’ve come this far, I might a well keep going. I had looked online a few days ago to find out exactly where the church was, so had no problem finding it. As I approached the closed gate I saw a lady get out of a car and open the gate. I saw a sign that said ‘clergy only’ so asked if I was allowed to go in. She said she didn’t think the church was open but that she saw no reason I couldn’t come onto the grounds. 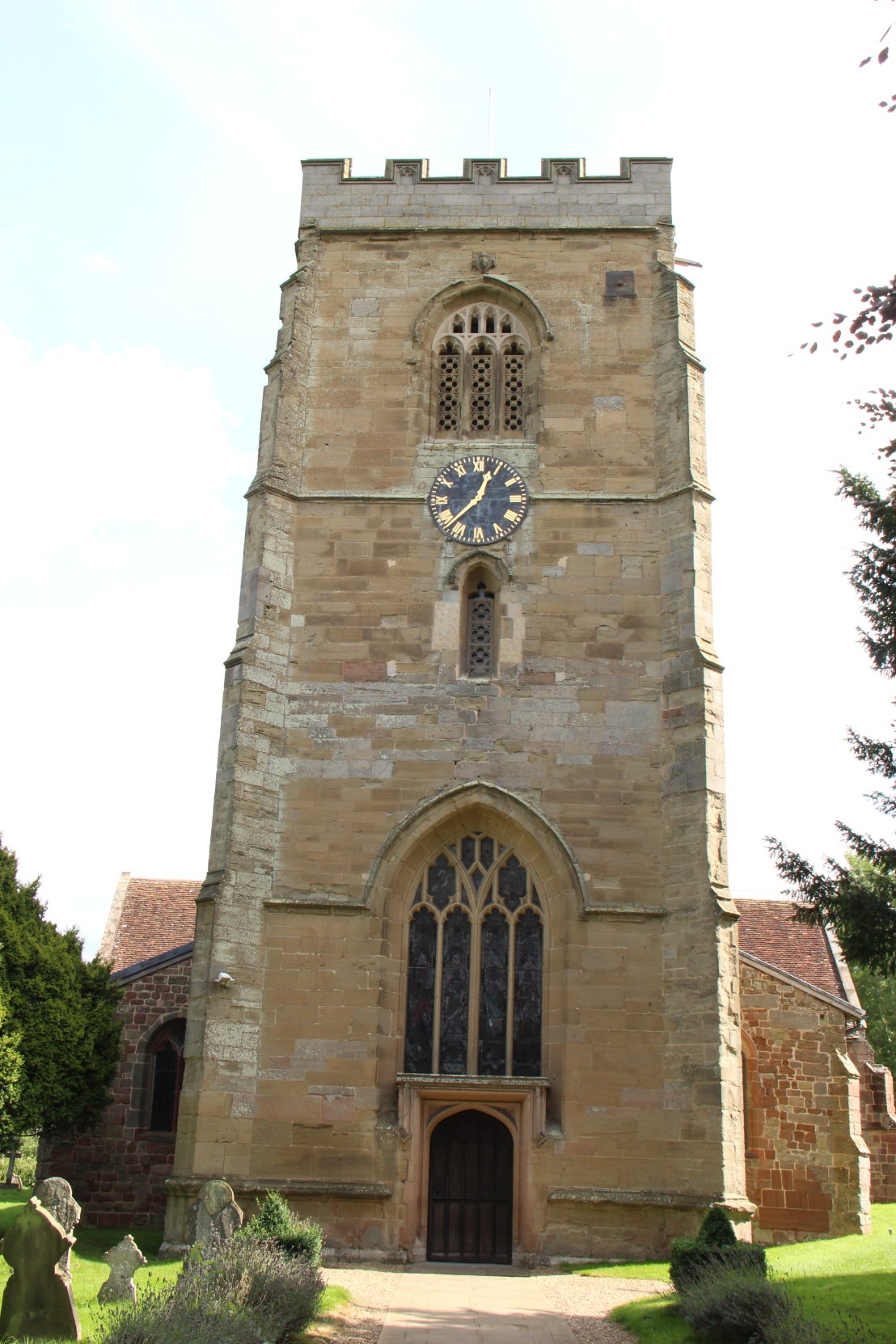 The church has different parts that were built at different times, going back to the 12th century. There are various graveyards as well – some extremely old and worn, and some much more recent with new flowers. After walking thru the graveyard a bit I was heading back to the side of the church when the path went thru some bushes. Just to be safe I pushed the encroaching branches aside with the back of my gloved hand, but one of them sprang back right after I’d passed a brushed my right leg just on the inside of the knee. A moment later the stinging started – I never knew nettles grew that large, but at least I’d evaded most of them – it could have been a lot worse. Dowsed the leg with water, and continued on around to the front of the church. I tried the door but it was locked – oh well.

Retraced my route back to the river Severn, where I turned north towards the next bridge over to the city centre. The whole way along there were lovely fields to the left and groupings of flowers – a really nice ride. At one point, where there are wide stairs down to the river (and where the swans hang out) there was an emergency vehicle that had an inflatable boat at the back. They didn’t seem to be in that much of a hurry, so maybe they were just going for a practice paddle or something. Had some good views of Worcester Cathedral across the river.

Got across the river on the next bridge, then found the health-food store I’d been to previously. Got the vitamins Dominic had recommended, then tried to get back onto the canal to ride home. Unfortunately the road I chose didn’t have access to the canal, so I just kept riding on the road. I took Colin’s advice from a few days ago and took ownership of my piece of pavement – instead of trying to get as close to the edge as I could I rode a little further away where I felt more comfortable and not one car tried to crowd me or sideswipe me while passing. It wasn’t exactly relaxing, but not as bad as I’d thought it might be.

Got back to the house after almost 3 hours of riding – not bad considering I’d thought it would be more like one hour or less. When I was changing into my non-riding clothes, I saw that my right shin as covered in blood – I have no idea what I hit or whacked it on and it didn’t hurt at all but it sure had bled – that might explain the strange look two little girls had given me at the store, though.

Ate a late lunch, then went next-door to Lyn’s so I could use her computer and print my boarding pass. Her husband Philip was very helpful and did it all for me – all checked in and ready for boarding on Friday!