A lovely morning in Mansle – slightly hazy but not yet hot. Went to the store with Colin to pick up some fresh veggies and a baguette – didn’t leave for a ride with Neil until 1:30. Colin and Neil had already mapped out a picturesque route for Neil to take me on so we knew were we were headed – or at least Neil knew and I just followed.

There were lots of little hills, but I didn’t have to stop other than to take on some water – it was very hot. We passed many fields of hay, sad-looking sunflowers with hardly any blossoms left, cows, corn, etc. Went thru the town of Bayers that has a chateau, but it was closed, so continued on to our destination which was the lovely town of Verteuil-sur-Charente. It also has a large chateau (with a new slate roof)), and is, as the name says, on the river Charente. There are several cafes right on the river so we chose one to sit and have a drink at.

The cafe was very relaxing and friendly – there was an orange cat lying next to a planter – looked pretty tired from the heat. There were also two very fluffy chickens running free – they looked more furry than feathery, even their feet. 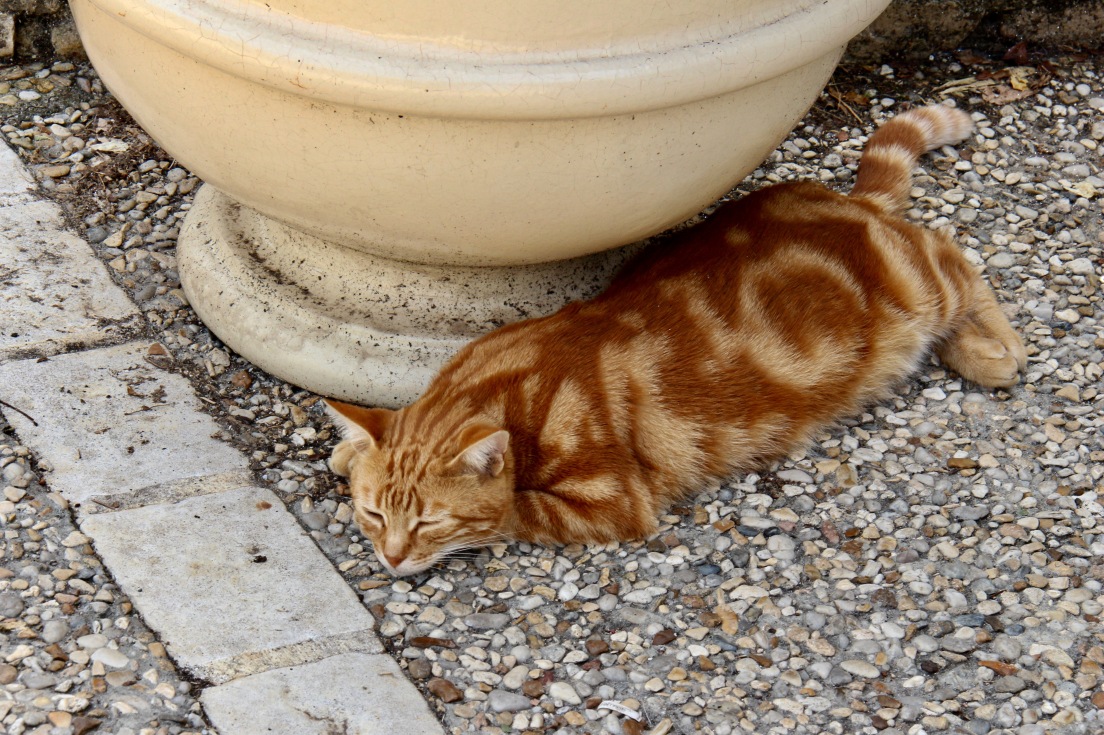 The cat wasn’t as zonked out as he’d seemed – we saw him on the bridge trying to get to a bird that was on one of the bridge’s flower planters. There were also two old cars in mint condition – a green Citroen 2 cv and a red original Fiat 500.

I was very tired and Neil and I discussed if I should stay and have a cup of tea while he rode home and brought the van back to collect me. After finishing my glass of wine I declared that I would be ok and could make it back on my bike. He offered me an energy bar to eat before we left but I said I didn’t like to ride right after eating as it made my stomach feel sick so declined.

The bill for my glass of wine and Neil’s beer was rather outrageous – 12 euros! That’s just over $18, but I guess you pay for the location (and the entertainment). As we left we passed the orange cat that was now playing with a small snake – my bet is the cat was having a lot more fun and ends up winning the game.

Rode back by a slightly different route – a bit longer but with fewer hills. I ended up having to stop twice to push the bike up the last part of two of the final hills – I guess I should have taken the energy bar – I just had no strength left and my legs felt like rubber. I did make it home ok – we’d ridden just under 38 km in all, but the heat was intense and totally sapped me.

Had a quick, cool shower to rinse off the dripping sweat, then ate a small, late lunch while Colin and Neil went down to the pub for a beer. The pub is putting on a special dinner tonight – we had to put in our food choices a few days ago – Colin and Neil both got the mussels with fries, and I had chosen the chicken curry with rice.

It was a pretty fancy affair with two long tables with tablecloth and place settings already in place. Many of the folks at our table were Brits who lived in the area, so we did have other people to chat with. The Brits and Neil were all fluent in french and Colin can get by – I understood a little bit when the conversation was in french, but mostly they spoke english.

The chicken curry was delicious – boneless breast meat, and a little spicier than what I had at the ‘snail’ restaurant Colin took me to in July before I went to Worcester. It was a lovely evening, and we got back home around 9:30.

Today’s Vuelta wasn’t taping until 7 tomorrow morning, so watched a little bit of tv then went to bed at a fairly decent time.