Woke up early very cold, but too tired to move the black blanket out from under me to over me, so lay there feeling chilly and not quite asleep. I did do the sleeping bag zipper up, which I have only done once before and was a bit warmer.

I had a nice fairly-hot shower – the shower facility was actually heated so that was unusual – no sudden shivers as soon as I turned the water off. It was far too cold outside to do yoga, so we just ate breakfast then tried to leave.

We had told the office yesterday that we would be leaving around 10 and she told us they opened at 9:30 so it seemed like it should be ok. But when we went to leave right at 10 the office was locked tight. We hung around for 1/2 hour – Colin calling out and knocking on their house door repeatedly, while I was getting the last use of their wi-fi. They never did appear, so we put some cash in an envelope with a note written on the back and left it under a rock at the office door – hope they don’t sic the camping cops on us.

Drove mostly east and a little bit south – stuck to lesser highways so it took a little longer but was nice and more relaxing. The mountains suddenly disappeared and the plains began. Went thru Ponferrada, which was a larger town – saw a really neat mural on the wall of a house – stopped for food as well as gas, then continued on.

We stopped for lunch on the side of the road just after 1:00 – I got out to take a couple of photos – there was another of the big bull figures at the top of the last hill, so as I lined up my shot a small white van pulled in and one of the fellows in it said something to me in Spanish – it appeared that they just wanted me to take their picture, so I did, then they crossed over the road to a truck-stop/hotel on the other side – quite funny!

It got hotter and hotter as well – up to 26 or more by the time we reached the town of Sahagun. Tried to find the campground, which is not well sign-posted, so drove around a bit before locating it – office closed until 4:30. Went back into the town and parked the campervan – walked with the doggies a bit then sat at an outdoor cafe and had a glass of wine.

Back at the campground after 4:30 to check in and setup – nice enough place, and literally right across the road from the Camino. I was having a great face-time chat with Dominic when it failed, then couldn’t get back on. There are some really fantastic-looking trees over some of the paths here – they seem to grow together at the top as if they’re one tree coming from both sides.

We’d decided to walk back into town for dinner at the cafe, so left after 6:30. It wasn’t a far walk, and the evening was very pleasant. When we got there the waiter told us that the kitchen doesn’t open until 8, even though the menu we’d looked at said they served food from before noon until later at night. We went to another cafe across the square, but their kitchen had already closed for the day, so we returned to our original choice to wait – of course the wait was made better by a glass of local red wine and a plate of local olives that was brought without asking.

We were on what I think was the main square of the town – lots of kids playing with skipping ropes, riding little bicycles, kicking balls – all laughing and having a great time. One of the little boys had a very annoying ‘police horn’ on his bike, but he was having fun. 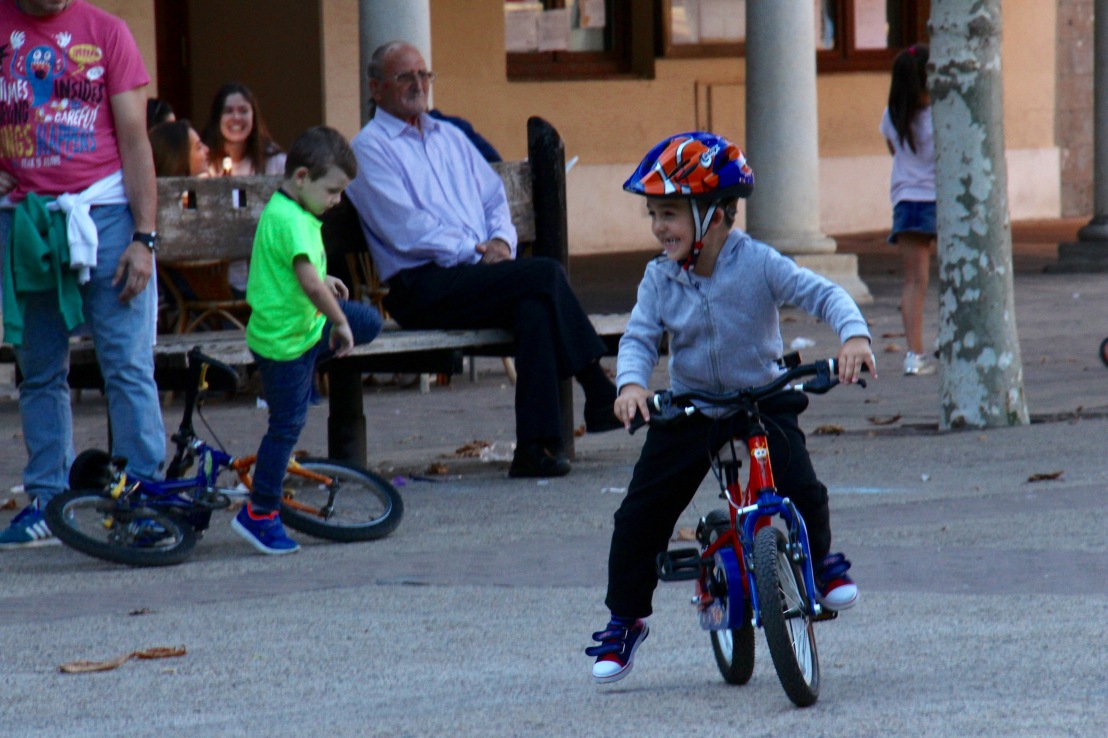 I think they could have used at least one more waiter – he was doing his best, but patience was needed. We both ordered off of the ‘set menu’ – I asked for Catalonian soup to start, with ‘stew meat’ as my main dish, and Colin asked for Russian salad followed by beef steak.

When my soup arrived I was quite impressed – almost a meal in itself and Colin’s salad was huge. We both dug in – the soup was very delicious and Colin was enjoying his salad when the waiter came back and said ‘Russian salad??’ to Colin, then removed his plate from under him as he was eating and replaced it with an entirely different one – apparently he had brought the wrong one and how was Colin to know? The second salad also seemed very good, so he dug in again. We both wondered what was done with the first salad – was it chucked, or did they just throw a couple things back on it and serve it to the proper person?

My main course was wonderful – beef stew that was so tender I didn’t even need my knife to cut it, served with fries. Colin said his steak was good also. I didn’t have room for dessert – it was all I could do to finish my meal, and when it came time to pay Colin said it was his treat!

All this time the kids were still playing in the square – the doggies got a lot of attention from time-to-time, but remained very calm. Slowly but surely the square started to empty – I wondered how late some of the little kids stayed up as we were still eating after 9:00, and it was a school night.

Walked back to the campground and headed straight to my tent – used the wi-fi a bit, then fell asleep quickly.