Didn’t sleep too badly – little Mo snuggled up right on top of my right arm for the last few hours. At one point I heard cars dis-embarking from a ferry that had arrived – must have been around 5:00.

Got up around 7:30 – kind of cloudy day but not frigid. Gas still not flowing to the stove, so no hot tea with breakfast. Colin showed me the receipt from the tow-truck service yesterday – almost $800 euros!! So fortunate that he has full insurance. He then tried to start the campervan but the battery was totally dead again – another call to his insurance company, followed by another visit from a tow-truck. Again the campervan started up immediately, and the guy told him that it was charging ok.

Colin kept the van running in case it didn’t start again – we took a drive up the coast a ways, then by the time we got back to the ferry terminal they were lining up to go thru customs. We got thru without much problem – doggies have up-to-date passports of their own, and micro-chips as well. My passport wasn’t questioned either.

Sat in lines on the other side of the customs barrier waiting to board – motor running the whole time. Colin had asked before we got on what would happen if we had a problem starting the van again and was told that it was ok – they have cables to jump-start vehicles if needed. We were parked right in front of several large trailers that had been dropped off and would be picked up on the other side. 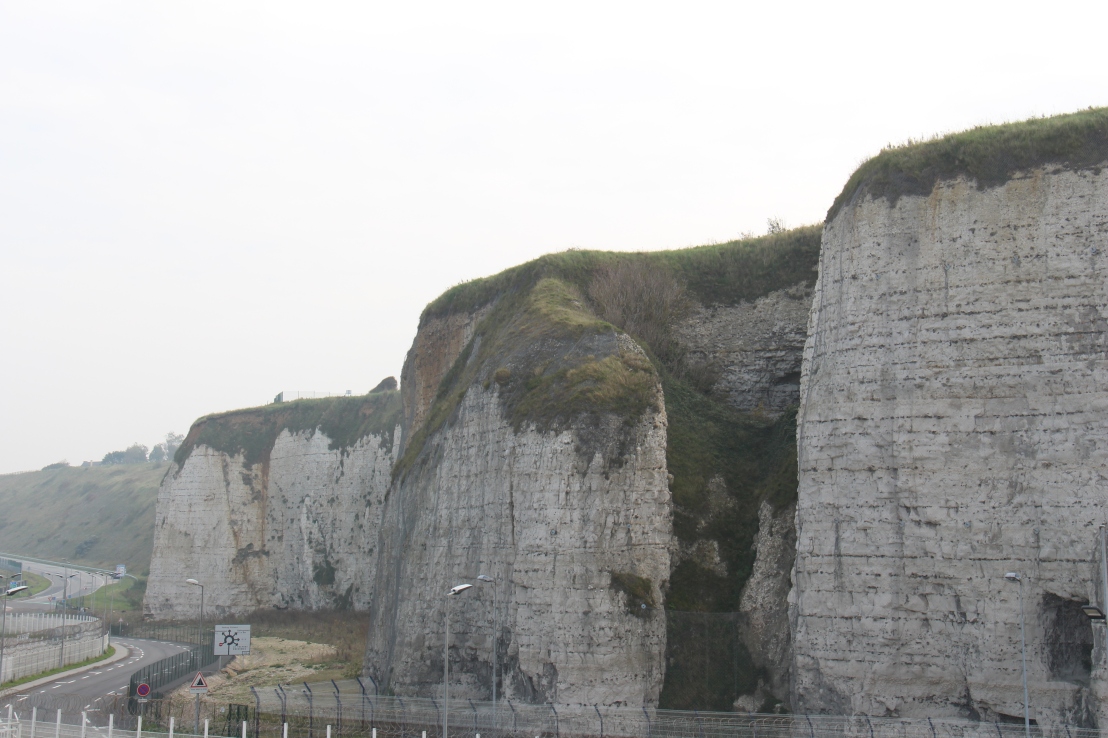 As we pulled out, right on time, I was struck by how retarded the plan of landing at Dieppe in the War was – it’s a beach in front of a small plain, surrounded all around by huge towering cliffs. They were sitting ducks – simply insane. The morning was very hazy and misty, so visibility wasn’t great, but I could still see the general area.

I was quite impressed by the ferry – it had beautiful gleaming wood floors everywhere, and the tables and chairs and all the railings were lovely wood also. In some areas there were large comfy-looking leather recliners in front of a big screen tv – apparently used for night voyages by folks that don’t book a cabin.

The sailing wasn’t full so there was lots of choices of where to sit, and lineups for drinks or food weren’t long. Colin bought me lunch, which was actually quite tasty – I had beef bourguignon on rice. The crossing was fairly smooth, but unfortunately it was still quite hazy and you couldn’t see far.

As we approached New Haven after 4 hours sailing it looked almost like a mirror image of Dieppe – if you took that part of the English coast and squashed it up against the coast where Dieppe is it would fit like a glove – high white cliffs fit against high white cliffs.

As expected the campervan wouldn’t start, but the ferry workers were right on the case and got the jumper cables hooked up and the battery going again in a matter of moments. We didn’t hold anyone up and were dis-embarking in no time. I had to fill out a short one-page form at the English customs place on where I was going in England and why, but didn’t have a problem.

We headed west near the coast on fairly busy roads for quite awhile, then turned north. We had enough fuel that we didn’t have to stop at all and got to Worcester around 8:30. When we stopped I saw a large red stain on the floor leading from the fridge – I thought perhaps my wine had spilled, but that would be weird without me noticing it. I then concluded that maybe the beets in the fridge had burst (they were pre-cooked in a plastic bag with liquid).

We loaded the important baggage and stuff into the house, then I returned to empty the food from the fridge – the gas wasn’t working to keep it cold and we didn’t want the food to all spoil. When I removed the beet package I couldn’t see a hole in it, but bundled everything into a bag and took it inside the house.

Got settled back into the bedroom I’d used in August, and got to sleep quickly.