Got up before 8:00 and had a nice hot shower, although I had to spray the bottom of the shower first to get rid of some of the dead mosquitoes and other bugs. There were a lot of live mosquitoes also, but I seem to have made it through without any bites.

We ended up having a free stay – we still couldn’t find the owners anywhere and had to leave without paying. Since the gas line in the campervan still isn’t flowing we stopped for a cup of tea in Frome before meeting Joan and Derek for a walkabout of the town. Colin and Joan were born and raised in Frome and we had a wonderful couple of hours touring their old neighbourhood and the surrounding area.

At first it was raining, but then it cleared up a bit and got warmer. It was just like me showing Dominic around back home – everywhere we looked either Colin or Joan would say ‘that’s where so-and-so used to live’, or ‘that’s where we used to…’ or ‘that building was the butcher shop’, etc. The city has, of course, grown considerably since they were brought up there – it’s now over 40,000 and was only around 14,000 back when they lived there. 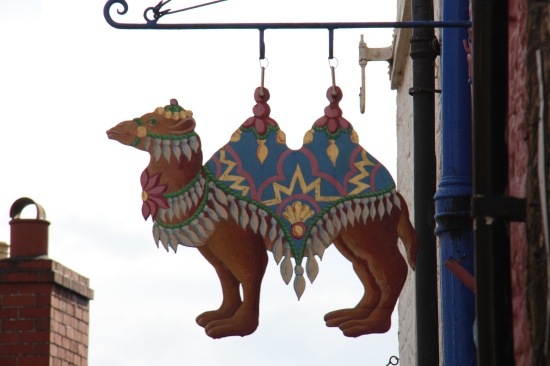 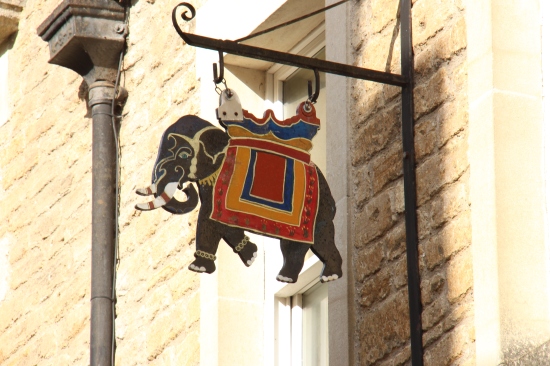 The town has rejuvenated the original shopping street, which is on a very steep hill. There are no cars allowed on most of it, and the shops are all spruced up and prosperous looking, not all old, empty, or run-down like in many places. Another old street that is really neat has a small stream running down one side – you need to watch your step!

There was a small market happening, and I sampled an array of cheeses, ending up buying two – a lovely mild sheep cheese and a local Stilton. I could have gotten 6 or 7 that were equally as tasty, but settled for additional samples instead.

We went to a coffee shop and sat outside as we had the doggies with us. I had my second cup of coffee in 4 or 5 years, and was it ever good. We said goodbye to Joan and Derek – I really enjoyed meeting them. They are warm and friendly and both easy to talk with – I’m very glad Colin took me with him to visit them.

We drove towards home, passing the White Horse again – we stopped at a pull-out so I could get a photo this time. We then stopped at his friend Mick’s place in Melksham for a quick visit with him and his wife Sandra. It was so nice hearing Colin and Mick reminisce about their cycling past, and Mick showed me photos that he’d taken at a past Tour de France that were very interesting. It all looked basically the same – hoards of people, folks in crazy costumes, racers giving all they had to get up a mountain. The only main difference was that back then most of them didn’t wear helmets (crazy!!).

Got back on the road again and headed home – it was looking stormy out, but as we went north it got a little less overcast. The traffic was pretty slow for awhile – it looks like they’re going to twin the highway in one area, and it really needs it.

We stopped for take-out fish and chips at the Bull Inn, and arrived home around 7:00. It was a lovely two day trip, and I’m so very glad to have met some of Colin’s friends and family – they we