Didn’t get much sleep – the crossing was rougher than when we came over but not as bad as I’d expected considering the storm that was forecast. We got a free breakfast because of the 3-hour delay in leaving. You get tokens for coffee or tea water and serve yourself from one of two machines. One machine had a short line-up so I went to the other that only had one fellow at it. He filled one cup, then another, then another – he was on his fifth one when the machine paused for a moment to re-heat and another fellow came up and gave the first guy 10 or 12 more tokens! I looked at him and said ‘you’re not serious!!’ He asked (with a heavy french accent) what I wanted and I told him just some hot water for tea so when the machine had restarted and he got his next hot drink he let me in so I could get my hot water.

We’d just finished eating when the ferry pulled into Dieppe around 6:45 (France time). It was still dark out, of course, so I still didn’t get a really good view of the place. 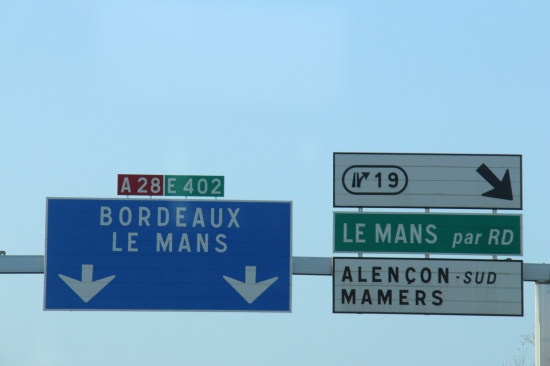 The drive home seemed very long, although the countryside was very pretty. I’m glad I wasn’t driving because I almost fell asleep several times with my head on the table in front of me. We stopped at Alencon for a very quick break – I was thinking of getting a pizza-type thing but couldn’t stand the thought of eating more white flour so settled for an iced-latte and some cut fresh veggies in the campervan.

We arrived back at Mansle just before 3:00 – a very long and tiring trip. Despite being so tired I didn’t want to have a nap in case I didn’t wake up in the middle of the night then not be able to get back to sleep, so I had a nice greek salad, then a shower to freshen up and revive myself.