Up at seven, cup of tea and quick bite to eat, then on the road with Colin.  We were headed for the Giro stage that goes today from Assisi to Osimo and were planning on seeing it from somewhere up the Passo di Termine, the first climb of the day.  We stopped at the bar in the village for help with the maps and directions, then keyed our destination into the campervan’s GPS.

I tried to follow where we were but lost track – we ended up taking a more southerly route that led us right by Pian di Boccio (the campground where we originally met last year).  It looked rather full with many tents that all looked the same – figured it must be a large group of some sort. We certainly took the scenic route to Foligno!

Sailed right past the outskirts of Foligno and into the Appenines heading north.  Just a few km past the city we hit a bunch of very slow traffic – seems we were behind some cyclists that had support cars etc. with them.  It was very slow going, then we left the main highway to go thru Nocera Umbra, which was where the cyclists were also going. Colin thought they must be wealthy folks that pay big bucks to ride the Giro route and have all the support, including police and ambulance (as well as a black car that looked like a hearse!).

Shortly after we passed thru one of the villages on the route there was no oncomig traffic so we pulled out to pass – they did not like that!  We got several very black looks and a couple of shouts thrown our way, then when we were almost past them we were forced to pull back and get behind them again – what a drag.  A 5 minute drive took what seemed like an hour. All of the towns and villages along the way were decorated to the nines – it seemed like every bike in each place was covered with pink bows and ribbons and setup on the side of the road.

We were now looking for a place to pull over and watch the race from as we were nearing the top of the pass – the cyclists and their entourage pulled in at the summit, which had a large parking area so we pulled in also and found a great place to park.  The German fellow in the campervan next to us told us the the cyclists were riding Pinerollo bikes with motors – wonder now why the one fellow was hanging onto the support van most of the way up the hill.

Had a walk around the area – the summit has a banner and barricades and everything – also lots of police and they just kept coming.  There are wonderful views in both directions from the top of the hill across the road from where we’re parked. Someone is flying a beautiful kite – actually it’s tied to a bush and didn’t need anyone to run it as it flew just fine by itself.

The caravan/cavalcade blew thru at high speed and didn’t throw out any goodies at all, although there were more of them than I remember from last year.

Colin and I each staked out our spots about an hour before the racers came by – I was about 5 or 6 feet from the summit line right under the banner and Colin was a bit further along nearer the bend.  I had two very nice older Italian fellows to my right and a man and woman to my left. I made sure I wouldn’t be in the men’s way and that I would have a clear view for taking photos to my left – no problems!

The racers were, as usual, preceeded by a heli in the air and a bunch of police cars and motos on the road.  There was at first 2 riders, then a bit later two more, followed by a single rider, then the peloton. They were going at a fair pace since it wasn’t that steep a climb.  We could feel the wash of the heli’s rotors it was so close – it seemed very warm compared to the rather chilly air.

I got some really good photos and they’re almost all clear and in-focus.  Got decent shots of Dumoulin, Aru, and the Froomester. 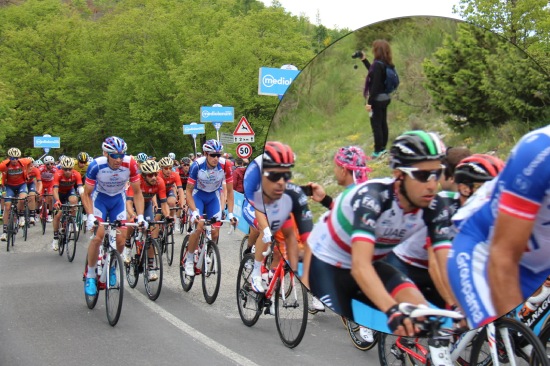 Within 5 seconds of the last rider passing the barriers were being torn apart and the parking lot started to empty.  We were the only vehicle heading back down the way we’d come – all the other cars and vans followed the way the racers had gone.  We passed a few folks walking down and a few more guys on bikes but no other vehicles – it was kind of weird.

Stopped at Leroy & Merlin on the way home and Colin was finally able to pick up the kitchen counter.  It was still kind of early so we popped by Poppy’s before going up to the house. Neil was just cleaning up so we walked back down to Poppy’s until he finished up and came down to join us.

Had another roast chicken dinner – this time thighs, followed by early bed.