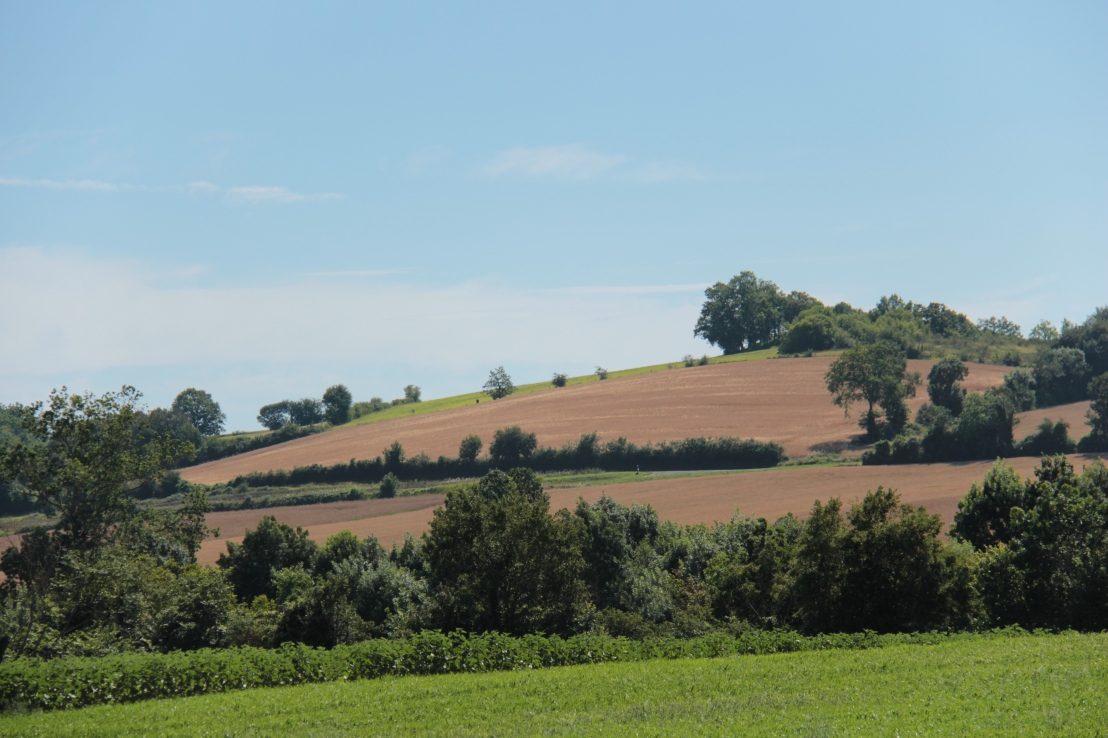 Got a bit of a late start, following another route that I’d plotted several days ago.  Went west to Cellette, then on to Villognon. I purposely went off course a bit there, as last time the GPS had me going in circles in the town, but I knew the next village was Luxe so I took the first road I saw that went there.

Eventually I got back ‘on course’ and ended up going past the Lac du Saules and on into La Terne.  By now the wind had really started to pick up, but I kept going to Ligne, where the route went south.  At one point it seemed that if I stopped pedalling the wind would actually drive me backwards – it was really hard going.

The main road bends and goes south thru Villesoubis, then it was mostly downhill until just before Chateaurenaud.

Up and thru the ‘village’, then down the hill and over the two bridges to St. Groux.  I was gone a little longer than I thought I would be, but it was a good ride.

Had a shower and a nice cup of tea, then Colin, Mo and I went down to the campground restaurant for a lunch of hot camembert on toast – it was actually really good.

After lunch we went up to Ruffec for groceries, then Colin went to the auto-license place and got a new plate for the bike-rack on the car.  I couldn’t believe it – after 10 minutes or less he had an actual plate made. Stopped by Claire’s house for a quick hello – Mo was super excited to see Claire’s dog Harvey, who is crazy about playing fetch-the-ball.

On the way out of Ruffec Colin took me to Le Rejallant, which is a place on the Charent River that has a small waterfall, waterwheel and lovely park area.  There’s an old chateau or fort right above it that looks like it’s getting some work done.

The water is apparently of very good quality – there were lots of kids swimming, as well as some fairly large fish. 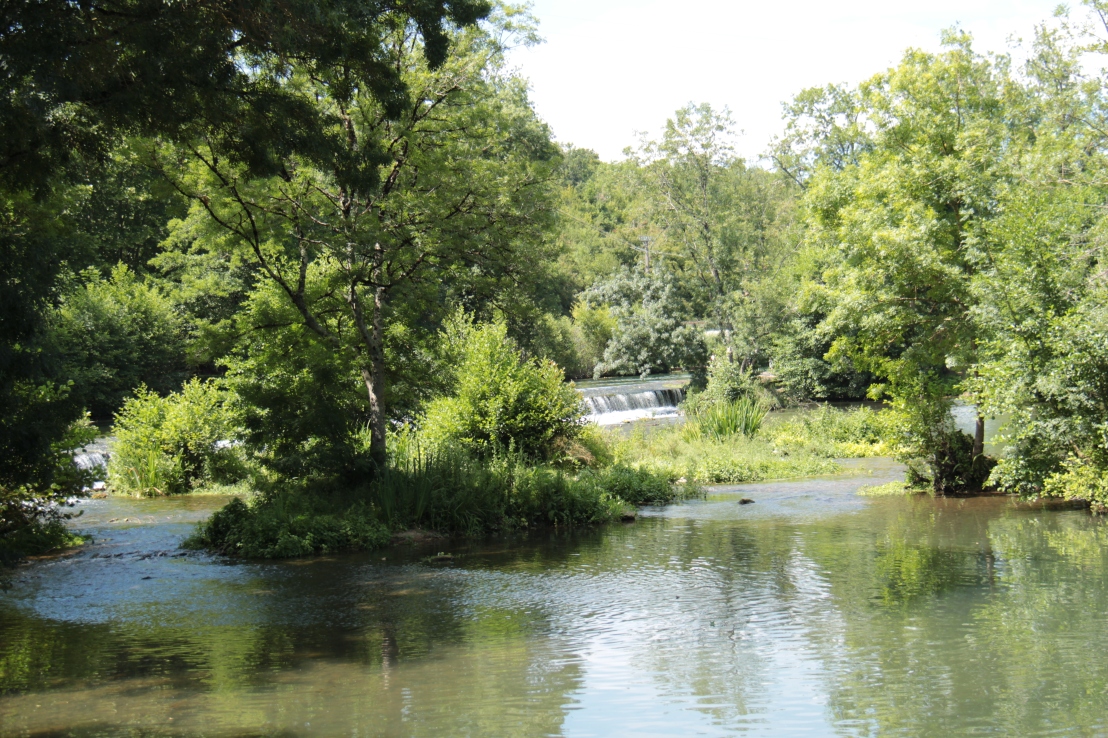 Saturday I planned to go for a ride while Colin was out with the club again, but at the last minute I changed my mind and stayed home with Mo and did yoga.  The day got hotter and hotter and the wind was, once again very strong.

Later in the afternoon we walked down to the campground bar intending to watch the France-Argentina game but a couple of guys that were already there were honking some incredibly loud and irritating horns so we went back up to the Penalty Bar instead. 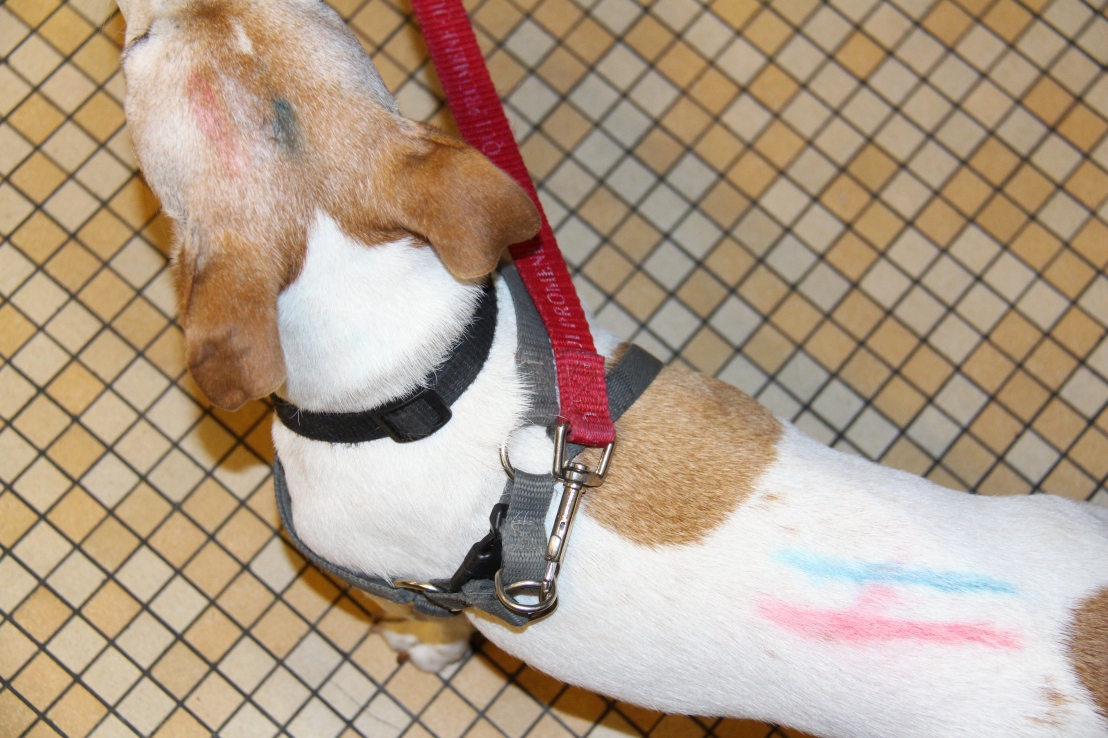 There were quite a few people there – Neil joined us a bit later.  Luckily France won – and it was a much better game than the one the other night that England purposely lost.  Mo was, as usual, the centre of attention – other than the game, that is. She had red, white and blue stripes on her head and back – obviously a France fan!

After returning home for an hour or so Colin and I walked back down to the kebab shop next door to the bar – I’d gone past it almost every day and wanted to try it.  We both got a donair wrap with fries, and I must say it was pretty good – I’ll probably go there again sometime.

There’s a large set of gates on the way to-and-from the bar that were actually open – I’d never seen inside them before.  You can never tell what a place is really like behind the cement or stone walls, and is this one ever nice – it’s a huge yard with many trees, a pond and a swimming pool.  It looks like nothing from the outside, and I was very surprised by the size of it, in addition to the beauty – and I bet the pool is especially nice on a hot day like this.