Got up nice and early and was on the road shortly after 8:30.  I had plotted a fairly ambitious route, mostly on quiet side roads towards Stratford-upon-Avon.  I packed a few extra things in case I got there and didn’t feel like riding back later.

Colin had warned me that the town is very touristy – mostly busses full of Japanese and Americans, so I wasn’t intending on seeing that much other than maybe Anne Hathaway’s house (and garden) and perhaps the canal.

The first part of the route was on kind of busy roads, at least until I was almost in Crowle where it turned off and went along the same road as the church tour I did last week.  At one point I had to ride for a bit along the A44 which was very busy. The GPS indicated that I wasn’t to turn off for 11 km and I almost stopped and turned around – just as I was thinking that, there was a road that veered slightly to the right.  Luckily that was the road I was meant to follow and was I ever glad to be off the busy one.

The quieter side road went thru Flyford Flavell and on past Radford.  There was a turn-off south that had a nice bench on the corner so I stopped for a minute.  I heard some voices coming from the east, and then a large group of walkers started to appear from around the hedge – there must have been about 20 of them in all.

I got back to riding and went another couple of km east before the clouds started looking more and more threatening.  The forecast hadn’t mentioned much rain but I decided against pushing on any further once the thunder started. 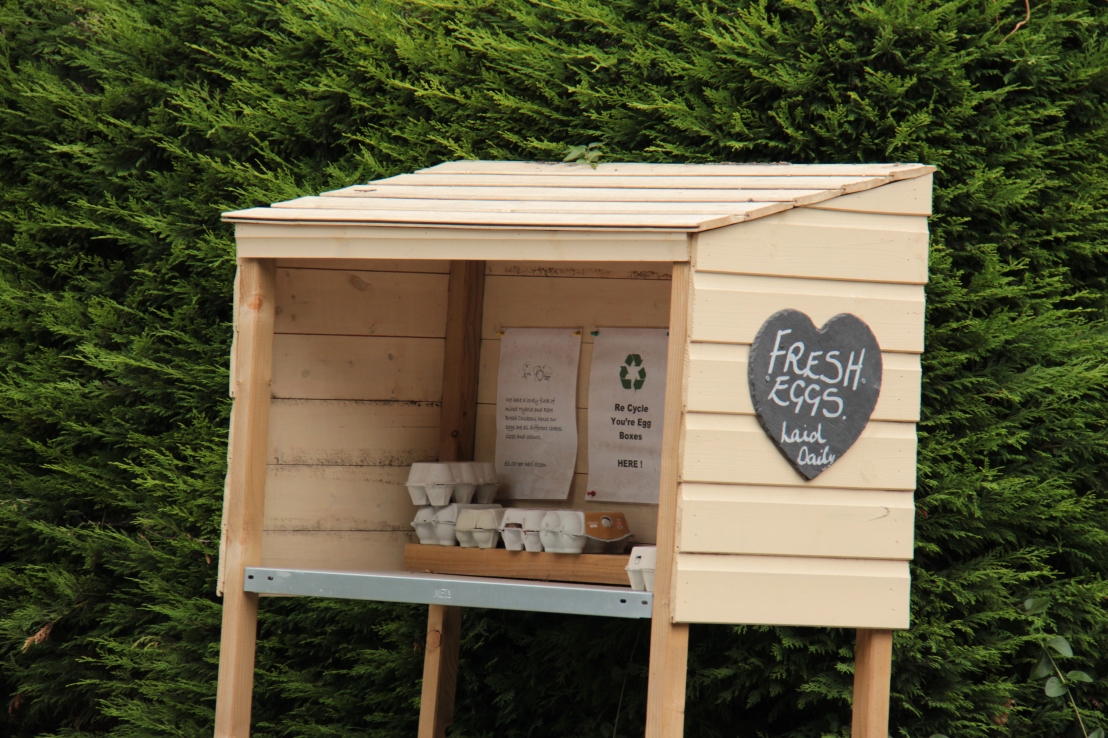 At one farm along the road there was a little booth that had eggs in cartons of 6 with a sign that indicated they were 1 pound each – the honour system still works in some places.  The place next-door had a ‘cattery’ – not sure what that is.

Back on the road from last week I was again in the ‘village’ of Huddington, which was where I couldn’t find the church before.  I took a right-hand turn that I thought might lead into the village but it really only went past a few houses and then ended. There was an older man with a large black lab (Charlie) and he asked me (the man, not the dog) if I was looking for something as I slowed down beside them.

I asked if there was an old church around there somewhere and he responded ‘oh – that would be on my property’.  We started chatting and, as is usual when he heard my accent (or – lack of, as I think of it) he asked where I was from.  When I told him Canada he asked what part so, as usual, I said Vancouver. Then he told me that he had lived there for many years and thinks it’s a beautiful city – he had been a doctor at Lion’s Gate hospital!

As we chatted we were walking to his property, which was across the road.  It’s a large estate with a very old ‘manor house’ and the church off to one side.  He told me to go ahead and lean my bike up on a nearby tree and cut across the lawn to the church gate.

He noticed that the lights inside the church were on and said that there may or may not be anyone inside, but if it was open I could go on in.  Just as I was about to walk over he mentioned that the church was involved in the ‘gunpowder plot’.

There was someone inside – a lady that was doing a little cleaning.  She also mentioned the gunpowder plot, then said she was leaving, and asked if I could please turn off the lights and shut the door when I left.  She also mentioned that the church picnic is on Saturday afternoon and I was welcome to join them if I wish.

I spent a little while inside – there are some very old-looking stained glass windows as well as large stone inscriptions.  It was very peaceful and quiet, although the whole place could use a bit of airing out, as it smelled pretty musty.

I knew my way home from there so ignored the GPS and headed for the canal.

I got home in time to watch most of the day’s Tour – very exciting day, ending on La Rosiere, where Colin and I had seen a day of the Criterium.  One sad thing, though, is that a lot of the sprinters, including Cavendish, didn’t make the time cut.