I must have slept about ½ hour in all, and was woken by the announcement that we would be docking in 45 minutes.  I roused myself as folks started coming into the bar area from the private cabins, which were just down the hall. I washed up a bit and brushed my teeth, then went to the self-serve cafe to get a cup of coffee.

I gulped down the coffee as we approached the port at Oistreham – they call the destination Caen as that’s the nearby city, but the port itself is actually Oistreham.  I made my way down to the bike deck and got everything ready – I was the first cyclist there and got loaded up and out of the way so the others could get to their bikes.

They were off-loading cars already when I suddenly freaked out and said ‘oh my god – i’ve left my bag in the cafe upstairs!’.  I leaned my bike against the wall, grabbed my camera case and raced to the door to the upper decks. I hoofed it up three floors and fled forward to the cafe, racking my brain trying frantically to think what had been in the green plastic bag that I’d really miss if it was, indeed, lost.  The cafe was empty of passengers, of course, and the staff was cleaning up. I ran to the first person I saw and said ‘I left a bag’ as I searched the area I’d drank my coffee in – no bag. The staff person said I should check for it at the information counter one deck down. As I raced towards the stairs again I actually started using my brain and thinking:  I remember shoving my blanket into a panier down on the bike deck, so how can I be missing the bag I’d carried it around in? I settled down a bit and just went back to the bike deck – the other cyclists had already left and my bike was leaning all by itself against the wall. I did a quick check, and there was the green bag, all flat and almost empty in the basket that my camera case sits in – I hadn’t even seen it when I originally freaked out, grabbed the camera case and fled upstairs.  I felt, at the same time, great relief, as well as super stupid! Chalk it up to no sleep – that’s my excuse, and I’m sticking to it!

I immediately got on the bike and started riding to the exit ramp, when a worker called at me – I wasn’t meant to ride the bike while I was still on the ferry – oops.  I walked the bike to the front of the cars, and they let me push it up the ramp ahead of the vehicles. I could see the other cyclists not far ahead and managed to catch up to them well before we got to the security booths.

Getting into France wasn’t nearly as hard as getting out of England had been – they looked at my passport, looked at me, and bid me welcome to France, enjoy my stay.  I rode a bit until I was at the terminal and missed the narrow path to it – I kept riding along the small building thinking I would turn around at the end, but as I passed the corner I saw Colin and Mo waiting for me.  I was so happy to see them!

The car wasn’t far so as I coasted along towards it and they walked we reached it at the same time.  Just then Cary rode past on the road and saw us – he joked ‘that was a long ride!’ as I laughed and waved at him.

We decided to drive for a bit before stopping for coffee and a bite to eat.  There are dozens and dozens of black migrants near the port – they are all over the place and come out of the ditches as soon as it gets light, and are almost entirely young able bodied men.  Apparently their aim is to sneak onto a lorry and get across the channel into England. I’m not sure what is better for them in England than in France, but the penalties to the truck drivers and the companies they work for are very steep if they get caught with someone hiding in their cargo.  And if the cargo is any kind of food or produce the entire load has to be thrown out, in addition to a fine of at least 25,000 pounds. The whole situation is very very sad.

We chose to follow smaller, quieter side roads home rather than take a quicker route via motorways.  Not far from Caen was a memorial to the Canadians that helped liberate the city on July 9, 1944. Memories of the war are all over the place here (as they are in so many parts of Europe)  – Normandy, of course, was in the thick of it, especially the attempts of the allies to get a foothold on the continent so they could have a base to work from to roust the nazis.  NOTE to Trump and others like him, as well as their supporters – beware!! Don’t forget what hatred, ignorance and paranoia can produce. He who forgets the past is doomed to repeat it!

Looking for a place to stop and eat was a bit challenging – we had passed thru Alencon intending to find a small cafe in a village, but nothing was open anywhere – either the village didn’t have any cafes or they were closed because it was a Monday.

We finally saw a restaurant/bar in the town of Varenne and what a great choice it was.  They had a buffet of appetizers and salads, and two choices for main course. I was so hungry I loaded up on pate and several kinds of salad, and was it ever tasty – I wolfed it down.  We both chose the beef for our main – it was steak, not an overly expensive cut but nicely grilled and tender.

After we finished we walked Mo around a bit outside – there’s a memorial to those killed in Verdun in WWI, and part of the display has a glass cover over some soil from Verdun. 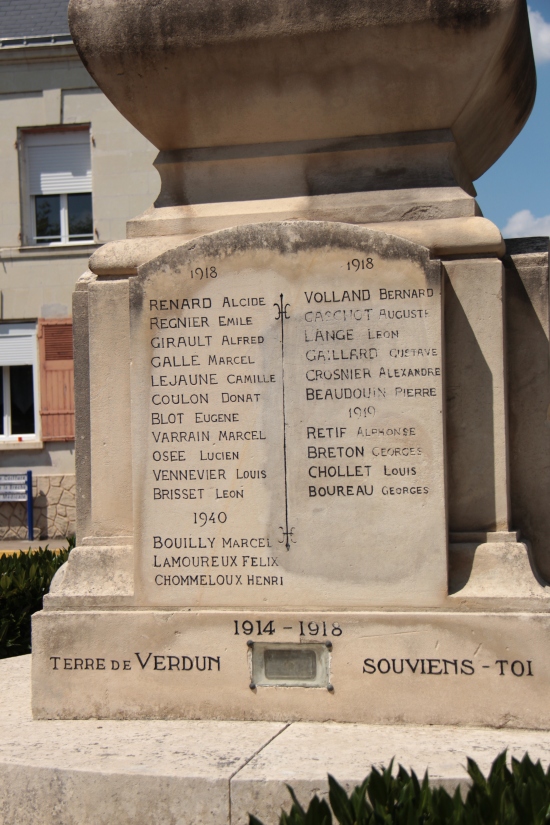 Just across the river as we headed further south there are a bunch of caves in the cliff – folks live in some of them, or at least they used to.

Lots of hay fields, and sunflowers.  A couple of times I almost nodded off because I’d gotten so little sleep, but we made it home to Mansle in pretty good time even on the smaller roads we were using.

Shortly after we got home I walked to the store to get some essentials – tomatoes, cucumber, fresh greens, etc.  Early to bed.