We were ready and on the road before 9:30, heading south/southwest, and using the Beemer instead of the campervan as it still has electrical issues.  Getting around Bordeaux was a slow pain, and the motorcycles were semi-suicidal.  They’d whiz up in beside us out of nowhere and cut in front, then do the same to the car in the other lane, many times just riding between the lanes full of cars.

Once we passed Bordeaux it was still slow for awhile, then gradually the traffic cleared and we made good time again.  We went pretty much straight south, passing through Ustaritz where we started to see signs for the Tour. We had put the GPS co-ordinates of a campground into the system but it misguided us so we just followed the signs for the stage route.

There were already lots of campervans parked along the road and we wondered if we would have to ‘wild camp’, which we were prepared for, but still preferred the idea of a campground.  We did stop at a B&B along the stage route, but it was, of course, fully booked. The lady there did, however, direct us to a nearby campground that we might try. 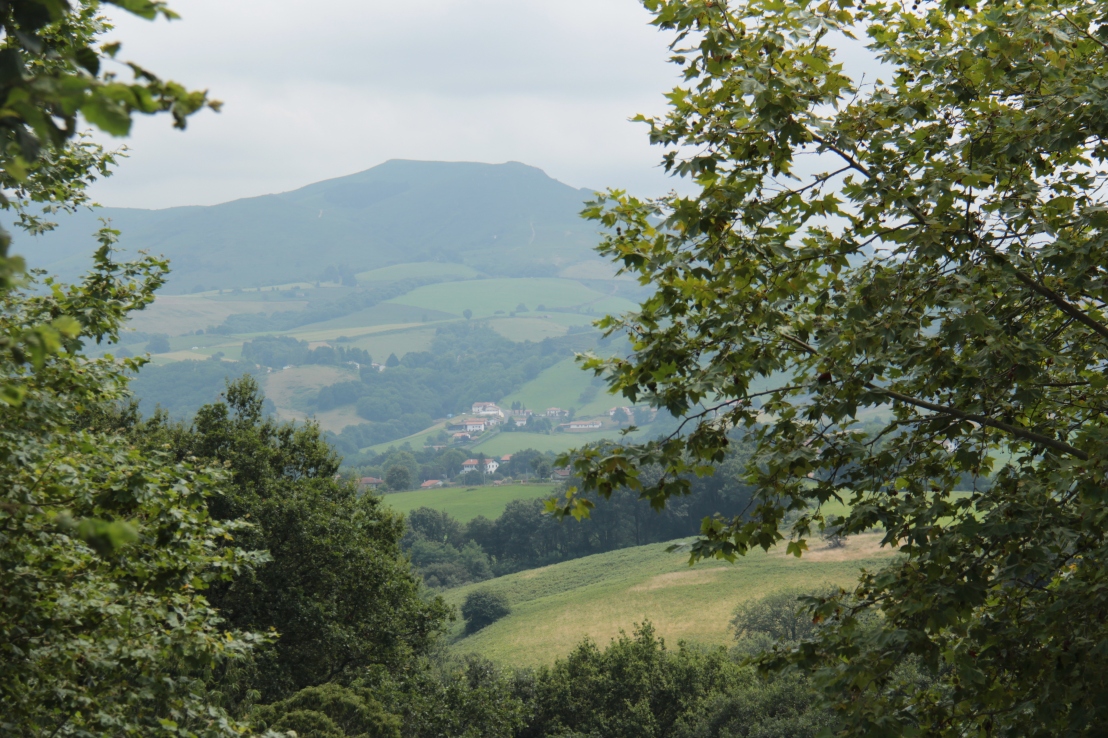 It wasn’t very far – just around the corner from where the stage will be going.  We pulled in and walked up to the house/office. A man came out and indicated that they were full for the next several days, but when we told him we only had two small tents he thought about it a bit, then said ok – we could squeeze in somewhere.

We had our choice of two spots, both of which were very nice.  We didn’t need electricity or anything, so just pulled into the spot of our choice and proceeded to set up our tents.  The views from the campground are just beautiful – it’s in the foothills of the Pyranees and the whole area is rolling hills covered with trees and small farms.

We needed groceries, as well as lunch, so ended up driving just past St-Pee-Sur-Nivelle for the groceries, then back into the town to a bar for lunch.  It was right on the main street – we sat outside and asked for two orders of the pate and each got a bowl of bread rounds and a small can of pate.

It actually was really good – not quite as good as what I had in Varenne, but not bad at all.  Almost everything on the menu – both food and drinks – is from ‘Basque’ – many folks have red neck-kerchiefs and the Basque flag is prominent.  I tried a local cider, which was ok – not overly sweet like some can be, and had a slight citrus flavour.

The shop next door to the bar we were in had some really neat posters of old Tours – one was from 1922, and the shop across the street had a cool painting of a cyclist on its window.  Most of the signs – shop signs and street/highway signs – are in two languages – French and Basque.

Our neighbours at the campground are really nice – they invited us over to play a game that seemed similar to bocci-ball, but was with disks instead of balls.  Colin passed on joining them, but I gave it a go. My first toss was really close, but after that it was hit-and-miss for me. One of the kids – probably around 13 or 14, was pretty good.  They tried to instruct me on how to throw properly – one such piece of advice was ‘not a frisbee’.

When the game broke up so they could eat dinner I left – sat outside and read for a bit, then headed into my tent for more reading.