Got up nice and early and were on our way to stake out our spot before 7:30.  We took the peage (toll highway) instead of the ‘scenic road’ so we wouldn’t get hung up anywhere along the way.

We went just past the summit of the second highest climb, then backtracked to a spot about 100 metres before the summit.  There were already two campervans parked there so we pulled in and setup the table and chairs and had tea and breakfast. The fog hadn’t risen yet on the mountain but we could hear the bells of some animals on the hill below.

As the fog gradually lifted we saw that the bells were on horses, not cows – every one of them had a large bell right under their chins, even the baby ones.  The fog lifted, then settled again a couple of times throughout the morning.

Another car joined us after awhile – it was a very nice young Spanish couple, Ivan and Isabelle, and we talked for quite a bit.  It was getting warmer and warmer, and then I had to use the washroom. I walked up past the summit, then down the other way looking for a safe spot but there were too many people riding, driving and walking up and down the road.  Just as I got back to the car the driver of the large campervan next to us got back from a ride on his motorbike, so I immediately asked if I could use his bathroom.

He was very nice and said yes, of course.  A short time later he asked if we wanted to move Mo’s cushion and our chairs under the shade of his campervan, then he brought out a bucket full of ice for our water and wine bottles that we were trying to keep cool in the shade of the table. 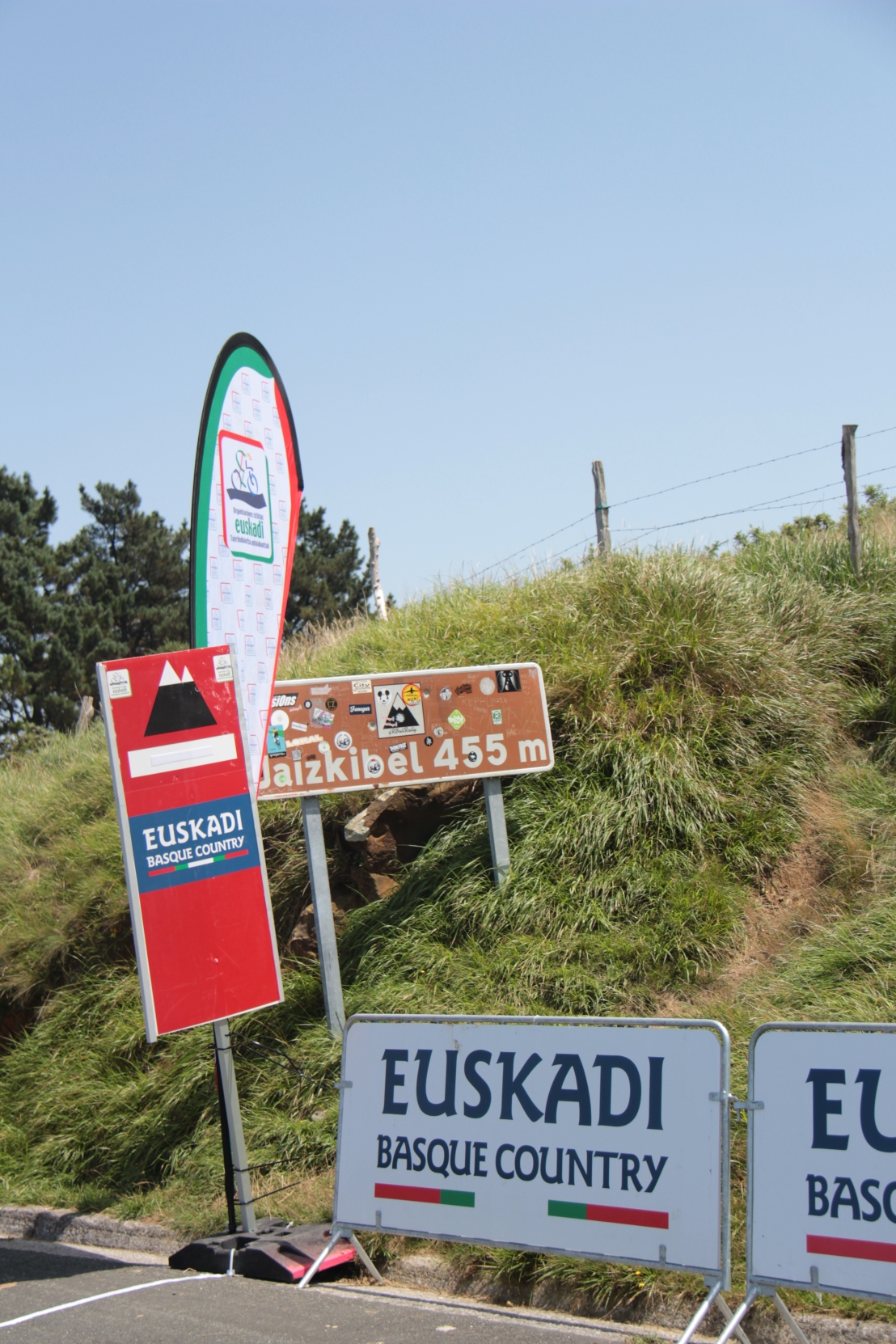 A young fellow came down the road and looked at Colin’s license plate, which is from France, and asked in French if we knew when the race would arrive – when we answered he could tell we weren’t French and it was quite funny – he was actually American.  He is here on his honeymoon with his new bride and we ended up chatting for quite a while.  In the meantime several more cars arrived until there was no room for any more.

Since we had the schedule we knew approximately when the riders should start coming by so around 2:30 I walked up to the summit of the climb.  There were banners and about 20 metres of barriers on each side so I went back and forth to decide where the best spot to watch from would be. The American (Michael) saw me and we talked again – he asked how we would know when the race was coming.  I told him we should first see some police motos, then some official cars, and probably the helis, which was what happened.

I chose first of all to stand just beyond the summit banner where there was no barrier, but when the breakaway of six whizzed past I thought I was going to get run over.  The racers veered to my side of the road because there was a corner coming and they wanted to be on the inside, so I moved to the lower side of the banner, outside the barrier.

That wasn’t a bad choice until the peloton came by followed by all of the team cars – that’s when a fierce wind kicked up and the barriers fell over and threw me back against the hill.  At first I thought the wind was from the helicopter, which had been very close, but I think it was actually the cars – they were going so fast to keep up with the riders, even though it was the top of a pretty hard climb.

I picked myself up and kept taking photos of the next group until the end, then looked around at the fallen barrier – it was completely down and had landed right on top of my backpack, but I had my camera and all was ok.  The security guys were worried about me and asked if I was alright – at least they didn’t think it was my fault!

I saw Michael and his new wife (Jackie) on the other side of the road and we talked for a bit – this is the first race she’s seen and thinks its wonderful.  I took a pic for them next to the summit marker on her phone – she had to show me how – ha ha – then went back down to the car for a bit to wait for the second passing of the racers.  Colin was in the large campervan watching the race on the satellite tv for a bit.

Back at the summit I moved down the hill to just before the start of the barrier, which they had picked up and moved onto the very edge of the road so it won’t – theoretically – fall over again.  This time around there was only one racer in the lead, and the peloton wasn’t very far behind. 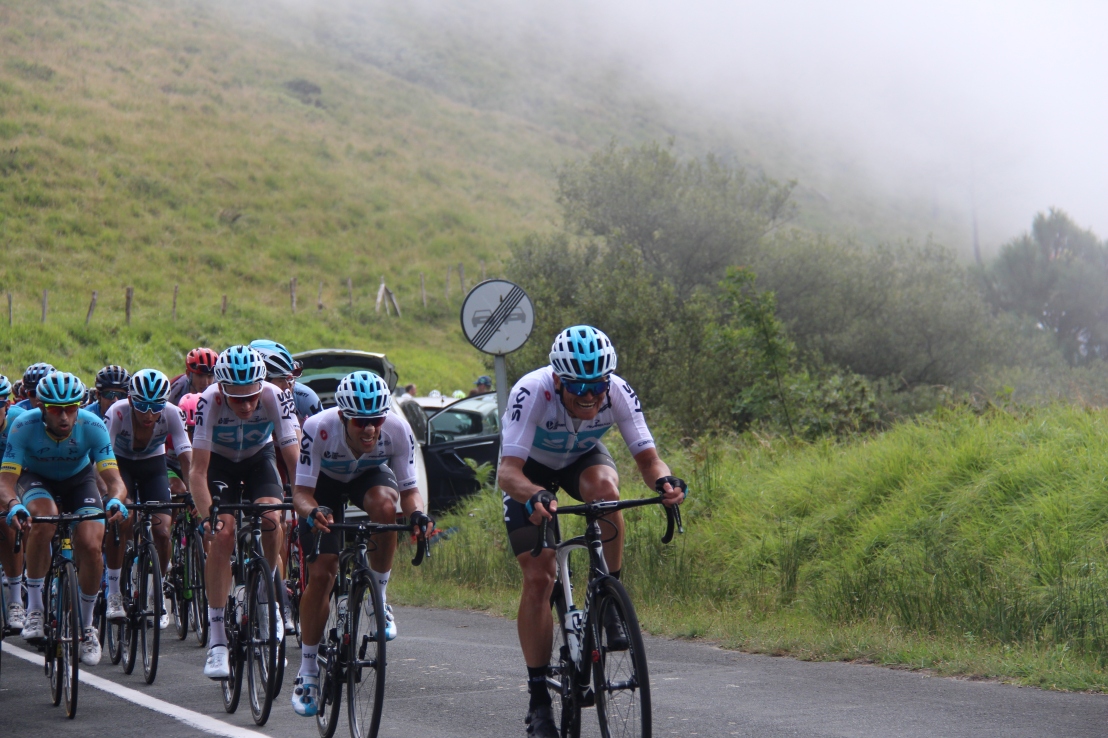 As soon as the last racer had passed they started tearing down the barriers and everyone, as usual, started to leave.  Back at the campervan they couldn’t watch the tv because the fog had rolled back in and there was no reception. We took our time packing up then headed down the mountain.

I was hoping to get an arrow as a momento, but they were already removing them – we saw the official van ahead of us so we stopped.  I jumped out and begged for one but one guy said he couldn’t give me any as they use them over and over. It happened to be the same three fellows we’d stopped and asked for a map from yesterday and we all recognized each other.  One of the other guys said wait – this one’s damaged so we can’t use it again anyway and gave it to me!

Relaxed back at the campground for a bit, then went back to the tapas bar in Getaria for dinner.

It was even more crowded than two days ago – you could barely walk in the street – no cars, thank goodness.  The tapas bar was crowded too, but we managed to get seats. 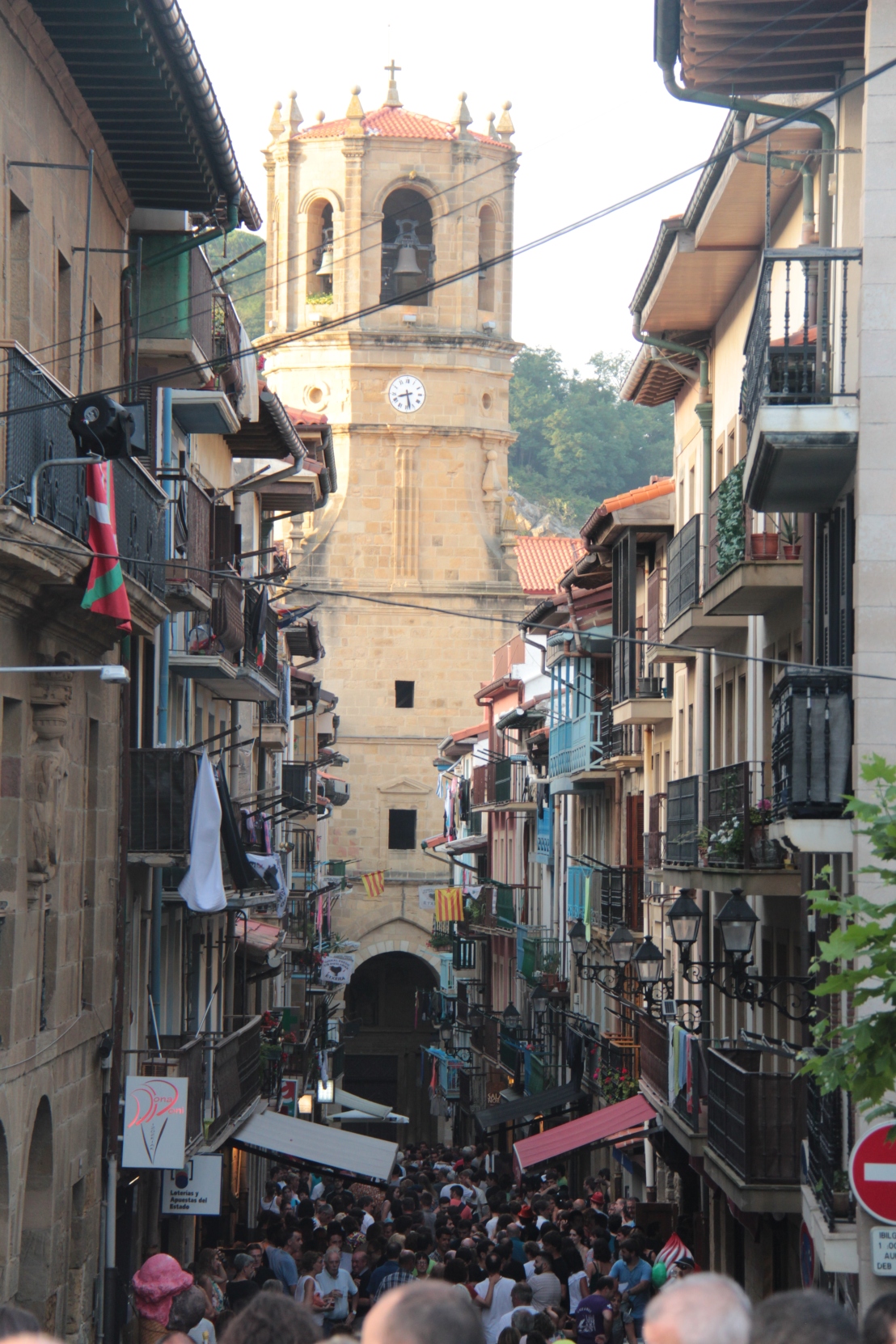 The food was just as good as the first time, and I really noticed how the three staff members worked together – one young fellow that was there on Thursday, a young lady and an adult man.  They did – as Dominic would say – the kitchen dance. They were so efficient and fast and always had a smile – it was actually great to watch. There we so many people talking and laughing that we almost had to shout to hear each other, but it was fun.  A really good end to a really good day!