It was a very chilly morning – not much above zero. I waited until around 10:45 to go for a bike ride while Colin stayed back at the apartment with Mo. It was still so cold that I put on my riding jacket with the hoodie and my full-fingered riding gloves. 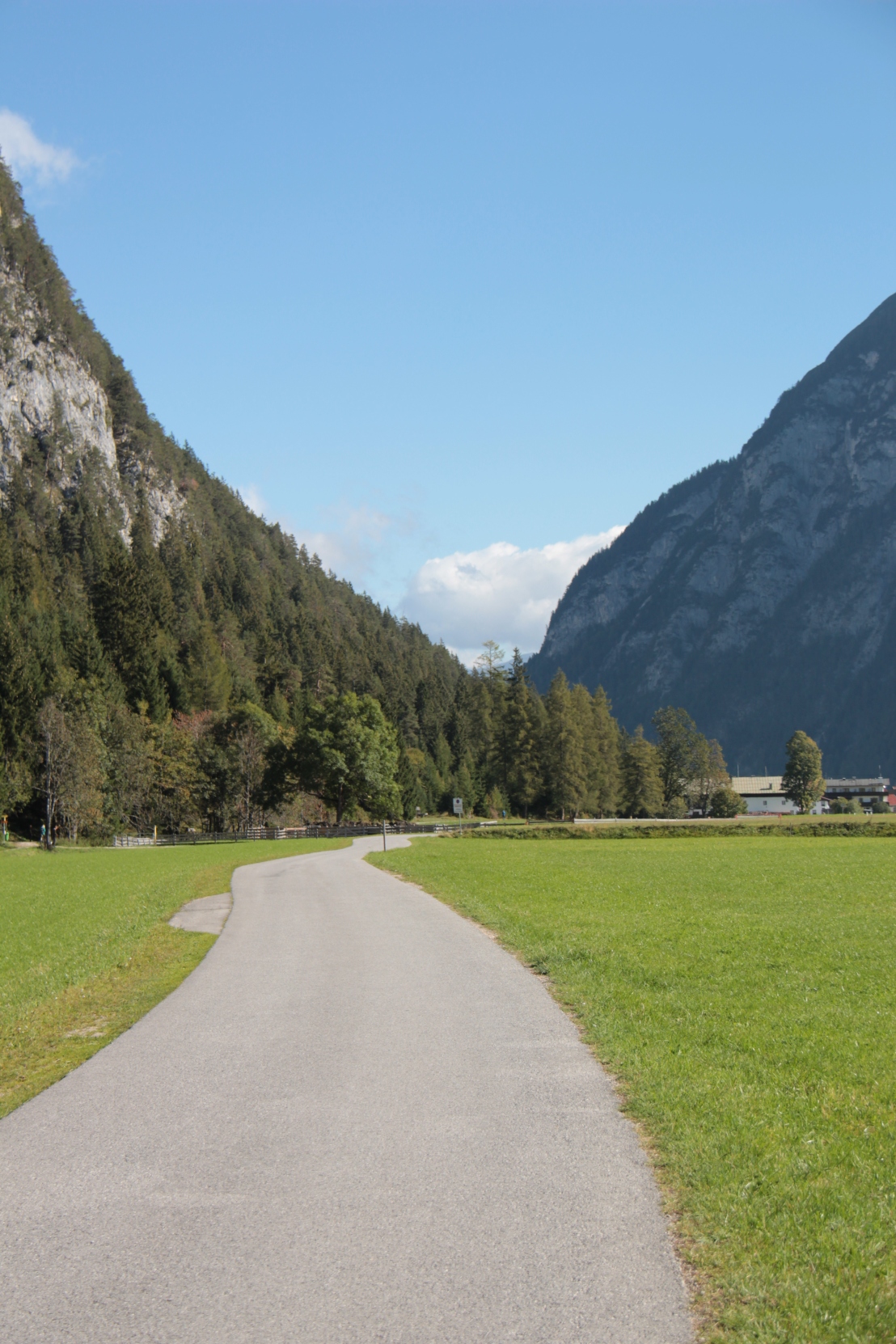 The trail that runs right past where we’re staying led shortly to a bridge across the little river. At that point I opted to stay on this side of the road rather than cross and follow the trail on the other side. 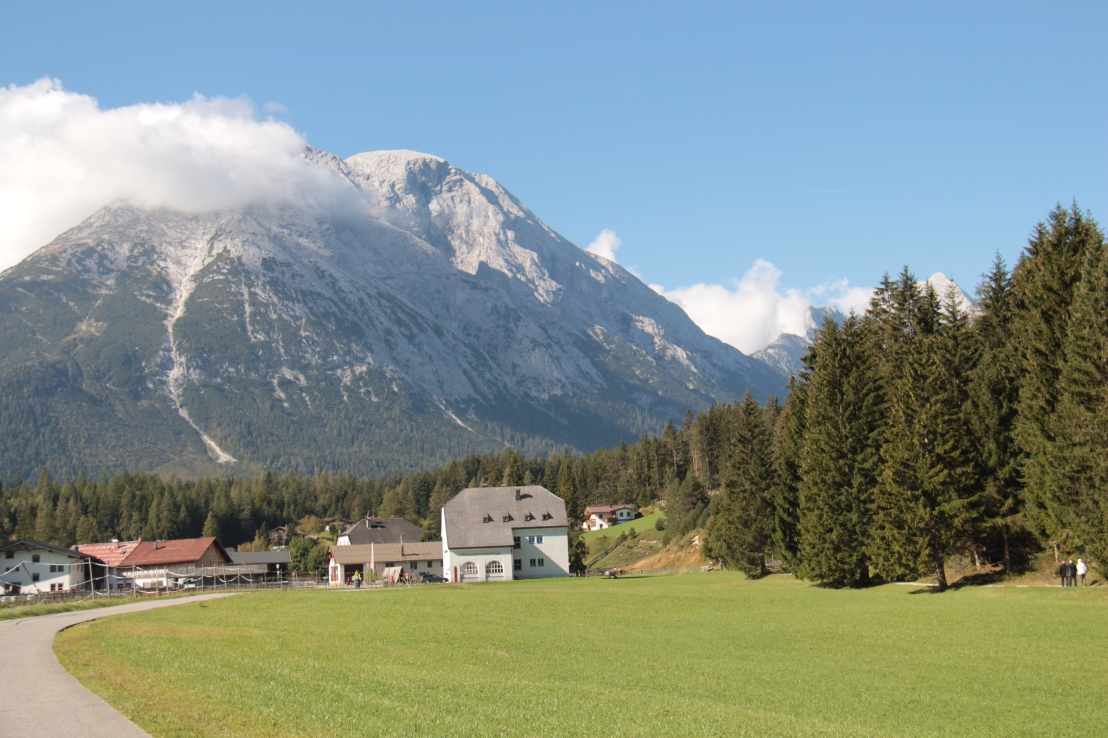 The trail led to the next little village, then on paved paths to the town of Gasse. The whole way I was looking across a beautiful green valley surrounded by towering Alps. 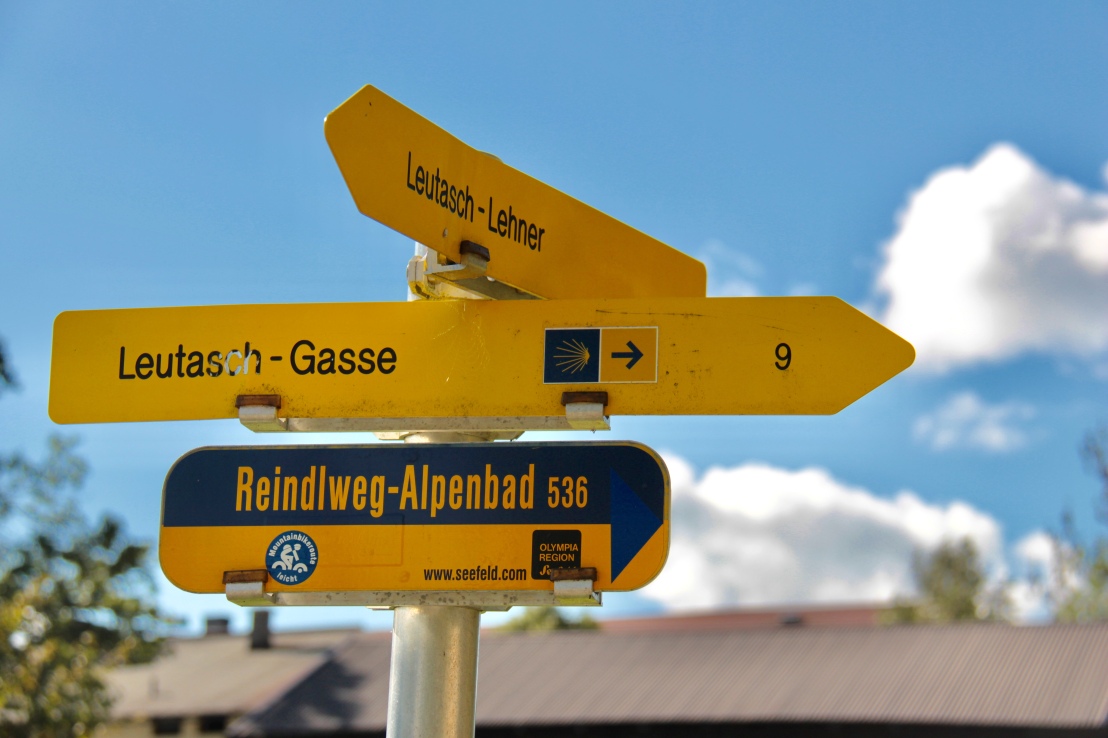 I didn’t go much further before I turned around and followed a smaller unpaved path back. Along the way I noticed that on one of the many path-marking signs there was a blue scallop shell – this is part of the Camino trail! 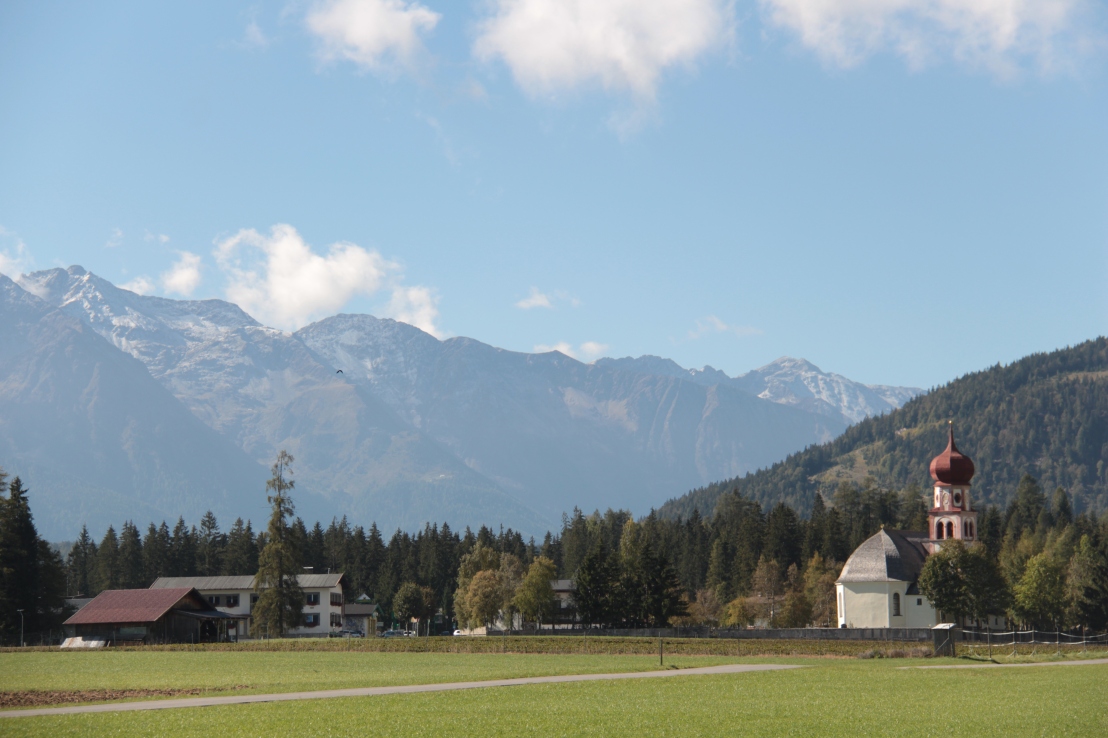 Shortly before the path that goes back to our apartment the Camino trail heads up the hill above so I decided to keep that for another day as I didn’t want to go too far and be late getting back.

We left around 12:30 to find a place to watch the women’s individual time trial from. The drive from where we’re staying to Innsbruck is lovely – several really pretty villages/towns, and every so often you can see a ski-lift. The towns all look very well setup for the ski season – both alpine and cross-country, and hiking is also very big in this area. 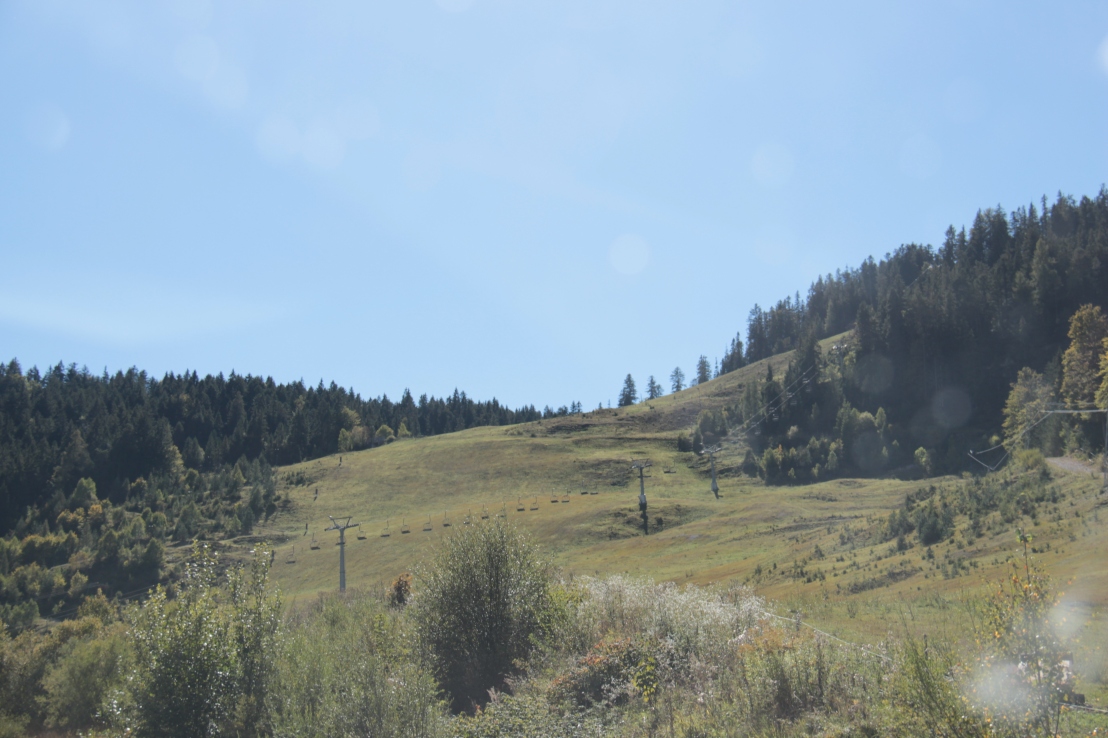 The GPS took us through Innsbruck on a very confusing route in order to avoid all of the closed roads, and we eventually arrived at the town of Hall-in-Tirol where we turned left and up the race’s most difficult climb of the day. 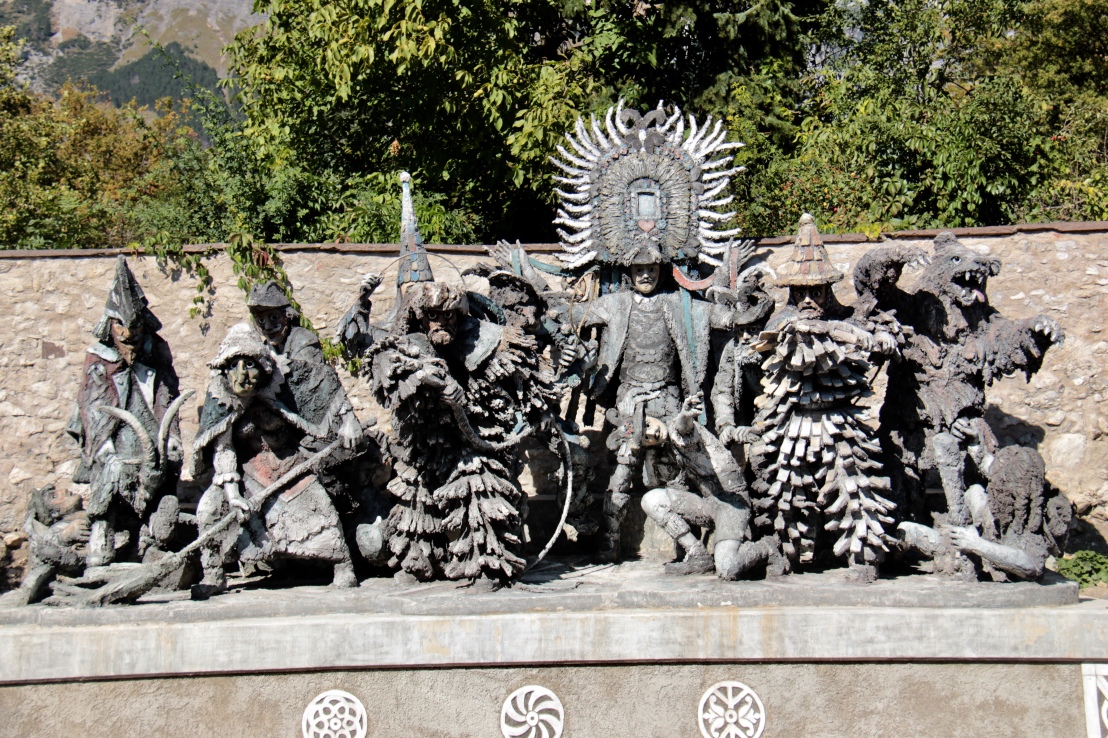 We drove along the climb to the town of Absam, where we decided to park – there was already a crowd gathered, along with several policemen. They waved us on towards the west, but rather than going we stopped and asked where we could park – they pointed a short ways east and told us ‘by the policecar’. We pulled in right beside their car and decided to take a little walk down the main road as we still had some time before the first racer arrived.

We walked a couple of blocks, going into a health shop to use the WC – they didn’t mind that we didn’t buy anything. They had a fish tank inside that Mo was pretty interested in and outside there were several stationary bikes setup with folks having a go on them. 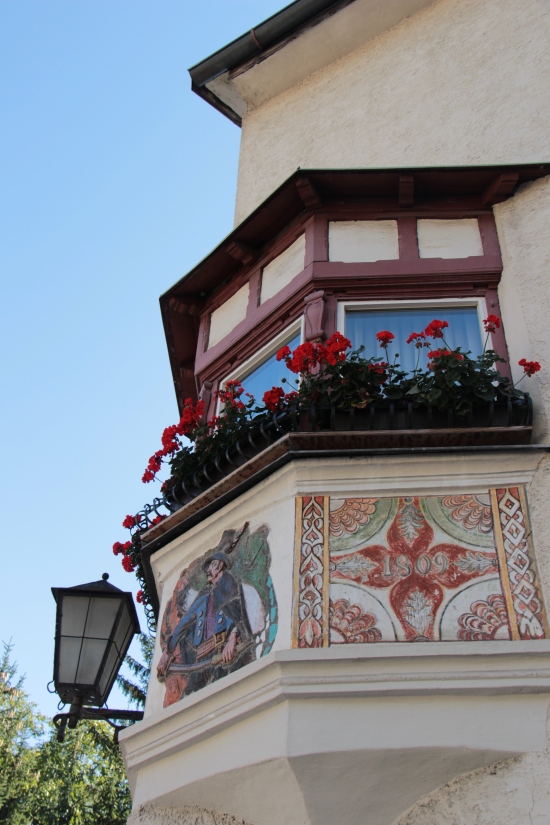 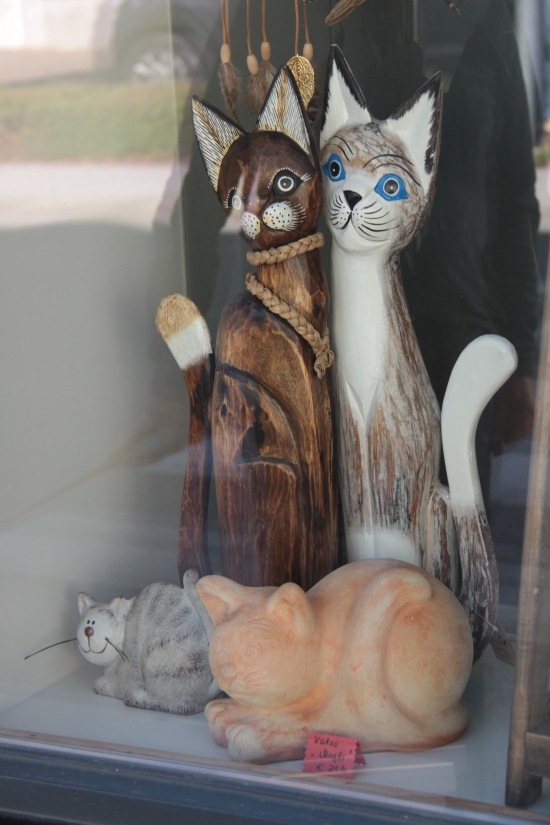 We walked back to the corner at the top of the climb,, picked up our chairs and went down the hill just a bit to pick our spot. We hadn’t brought all of the flags, but I did grab the maple leaf that Colin had bought – I pinned it to the back of my chair so it could be seen from the bend in the road down below us. 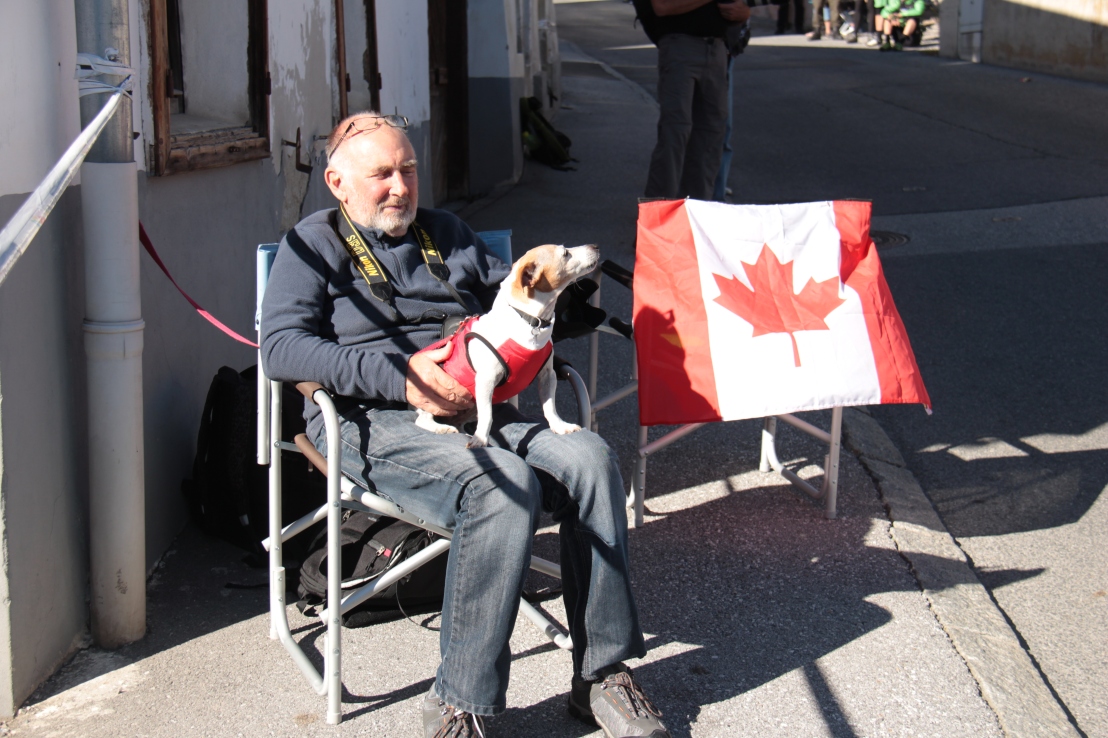 There were quite a few fans, some perched rather precariously on the roof of the house across from us, three guys on the wall, and several folks on the edge of a small fountain. 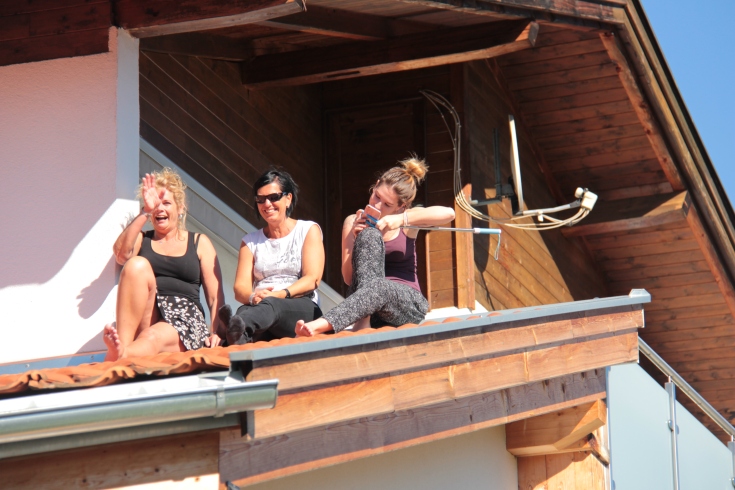 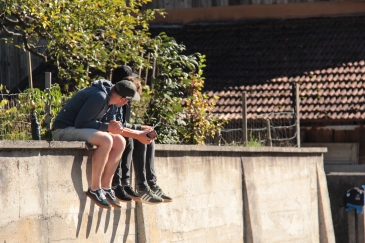 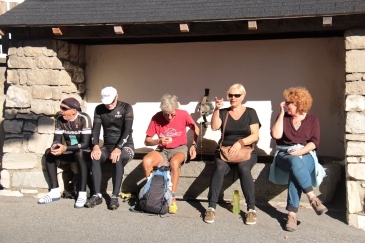 I almost missed the first Cdn rider as I was focused on the one from Great Britain – the Cdn was about to pass her and all I got was a photo of her back-end after she’d gone by us. I was paying more attention when the second one came along. 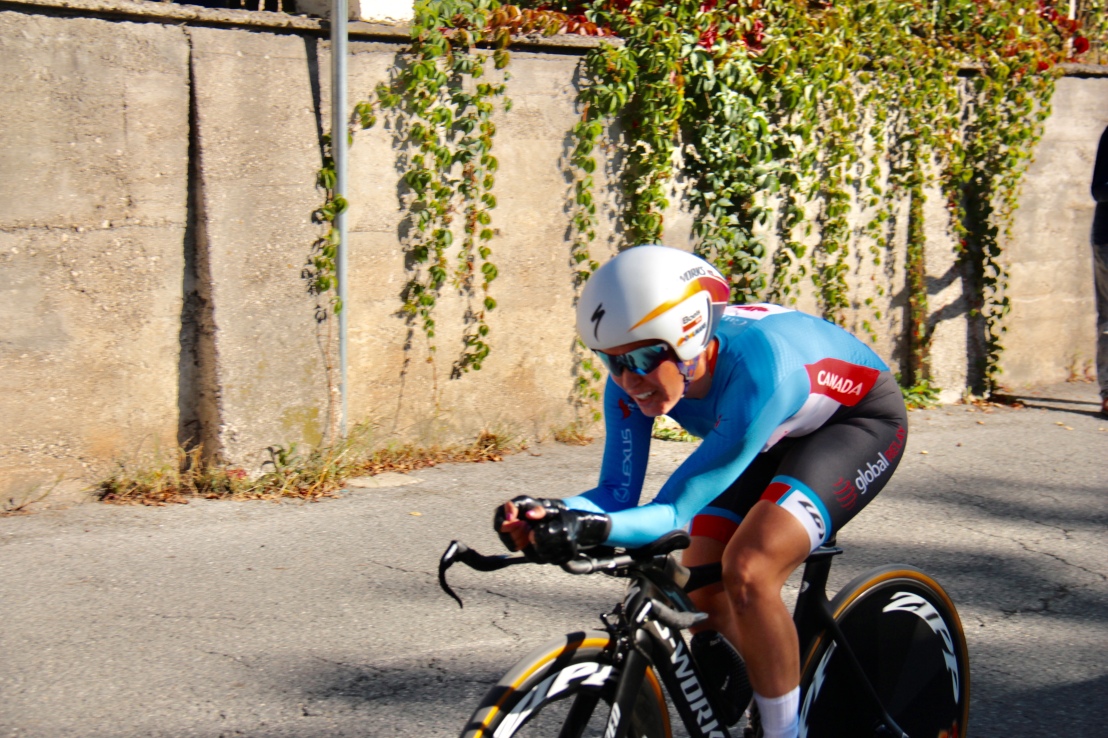 Once the last rider and all of the following vehicles had passed a couple of the ladies that had been watching from the fountain across the road came over and asked me about my earrings – they thought they were awesome. The husband of one of them had been watching the race just up from me on our side of the road and said he’d taken a photo of them earlier. I told them that they’d been made for me by a friend of Colin’s and they thought that was great. 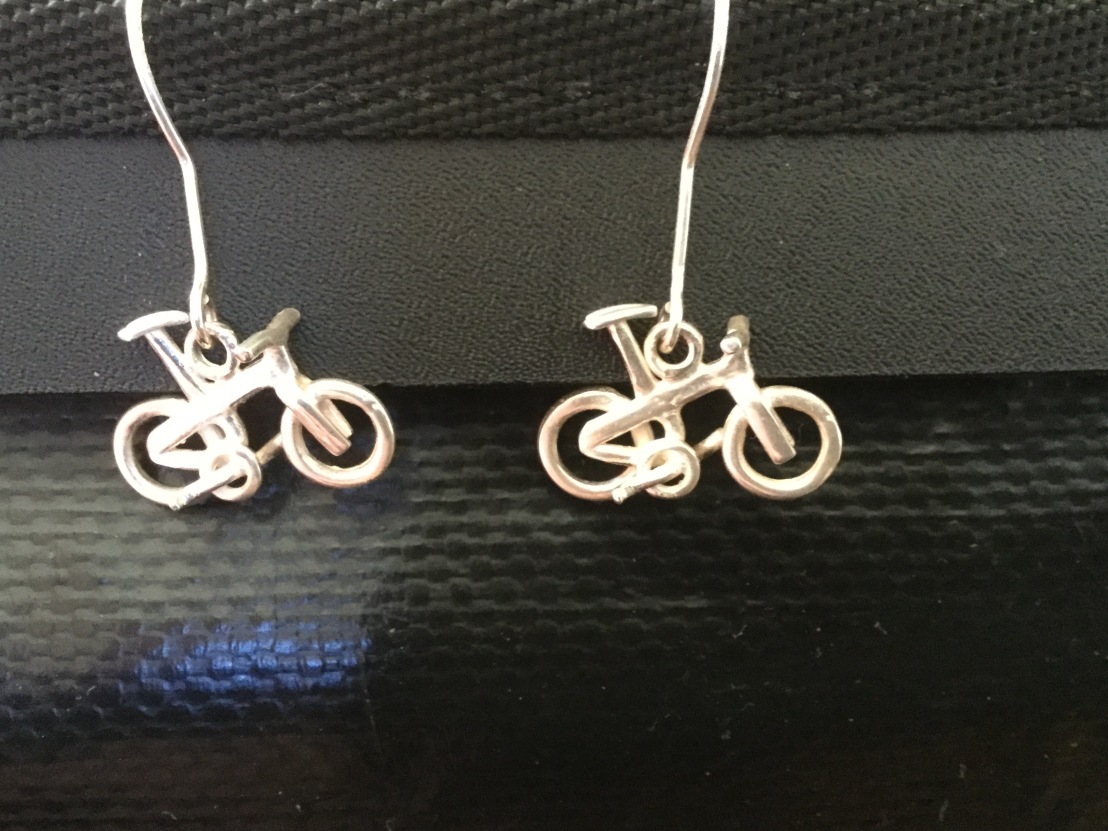 We went back up to the car and instead of heading home we went a little further east to check out what will be the men’s ITT course tomorrow. We stopped at a supermarket that had a cafe and used their WC, then sat down for a coffee – well Colin had coffee and I had a nice glass of wine. 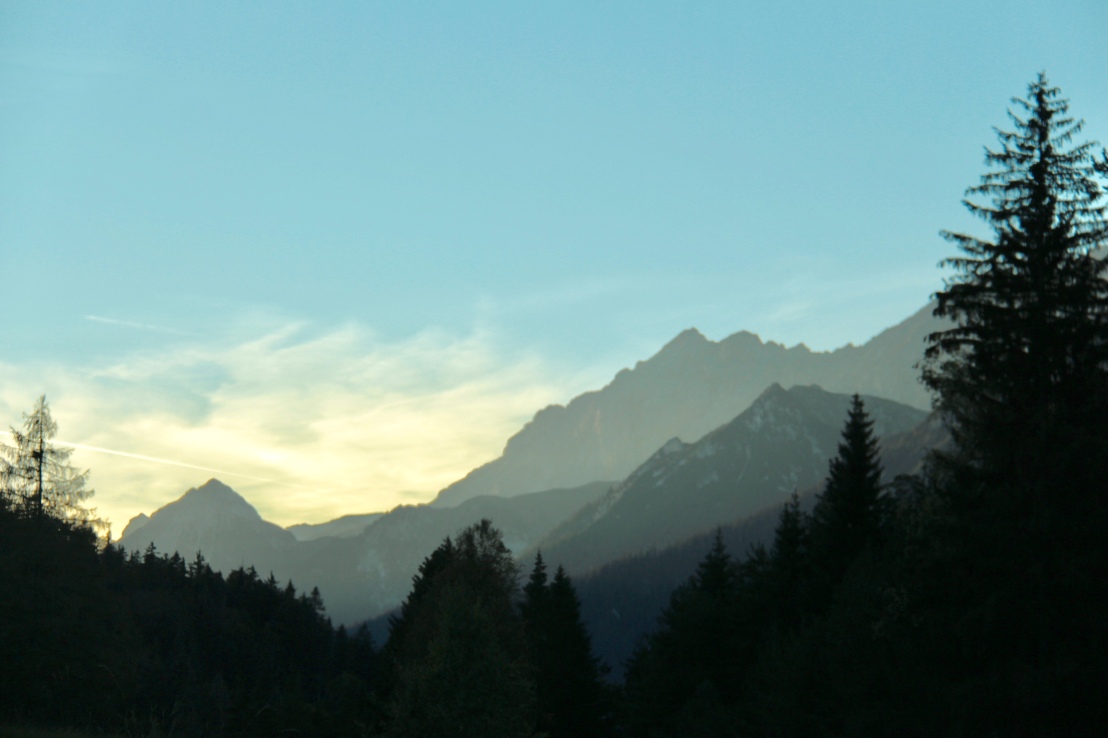 We followed the route backwards and saw quite a few spots on the one very hard climb that would be great to watch from. Back home we had a nice dinner of fish cakes with beets and coleslaw, and got a slightly earlier night.