Got up at a fairly decent time so we could have a cup of tea and a bite to eat before packing up all of our stuff and loading the car.

I’m very sad to be leaving Austria – I’ve really enjoyed being here – the area around where we’re staying, the beautiful city of Innsbruck, and the road races have all been just fantastic. The only thing that makes leaving ok for me is that we’re heading back to Italy.

We said goodbye to our hostess Lisa, who gave us each a present – a little jar of herbal salts that were made by a local lady – and got underway around 10:00 under pouring rain. We crossed into Italy via the Brenner Pass and headed south through Bolzano and Trento.

We stopped at an Autogrill somewhere after we crossed into Italy and had the best cappuccino I think I’ve ever had in my life – they make good coffee in France and Spain, but somehow a proper cappuccino seems beyond them.

We passed many lovely looking villages perched on hillsides, as well as quite a few forts and castles.

I must say that Bolzano was a big disappointment to me as I’d read about how beautiful it was and I know it’s a ski destination and also has excellent cycling paths – one of which goes all the went to Trento and beyond, mostly downhill.

However, all I noticed was all of the factories and warehouses – it didn’t seem quite the quaint little town I was expecting. But we weren’t stopping anyway and continued on south.

We reached Modena just after 3:00 and followed the GPS directions to find the B&B that Colin had booked online. We drove over 50 km out of town and into the hills before we basically dead-ended in a farmer’s courtyard. A boy came out of the barn to see who we were, and called for his father to help interpret – there were several cats watching the exchange, but they weren’t very helpful.

We realized that the GPS co-ordinates must have been completely wrong so input the street address instead – all the way back to Modena. We made a pit-stop at a bar – mostly so we could use the facilities, and found the B&B around 5:30.

It’s a large house and you go up to the bedrooms via the host’s kitchen. It’s surrounded by a very large organic farm that produces Parmigianno Reggiano cheese. We brought our bags in through the still-pouring rain, and then asked where we could find a store and someplace to eat. Our host gave us directions and Colin input it to the GPS – hoping we wouldn’t be driving 50 km to find the shopping centre.

This time we reached our destination on the first try – a large mall not that far away. We went inside and found a huge supermarket and picked up a few things. Then we tried to get a piece of pizza but the lady behind the counter was too busy chewing gum to give us much help so we went further to a tapas-bar type place.

We wanted a few of the tapas so each grabbed a little plate, but one of the girls said no no – we then thought that they wanted us to pay first. But that wasn’t it either – one of the other girls spoke a bit of english, and advised us that the tapas are only for those that order ‘the plate’, and she would bring it to us when it was ready, so that’s what we got.

We each chose a few things to snack on – they were good – then ‘the plate’ arrived – it was several kinds of thinly sliced meat and two small chunks of creamy cheese along with several bread sticks. I ate until I was stuffed – much more interesting than the pizza we were originally going for.

Back at the house the host invited us down for a glass of wine – he was preparing dinner for himself as well as a long-term guest that stays there four days a week while he works in Modena, then goes home every weekend to Tuscany where he actually lives.

We had a nice visit for a bit – we were also served more of the local cured meat to go with the white wine. Afterwards we went back to our room – I have my own bunk-bed, and it’s surprisingly comfy.

The next morning we were up at 7:00 for our self-serve breakfast in the host’s kitchen, then packed up and on the way around 8:20. The weather was a bit better – not exactly sunny, but not pouring rain either.

We stopped at another Autogrill and had another delicious cappuccino, then continued on south. We skirted east along the north shore of Lago Trasimeno to the edge of Perugia, then south to Papiano. 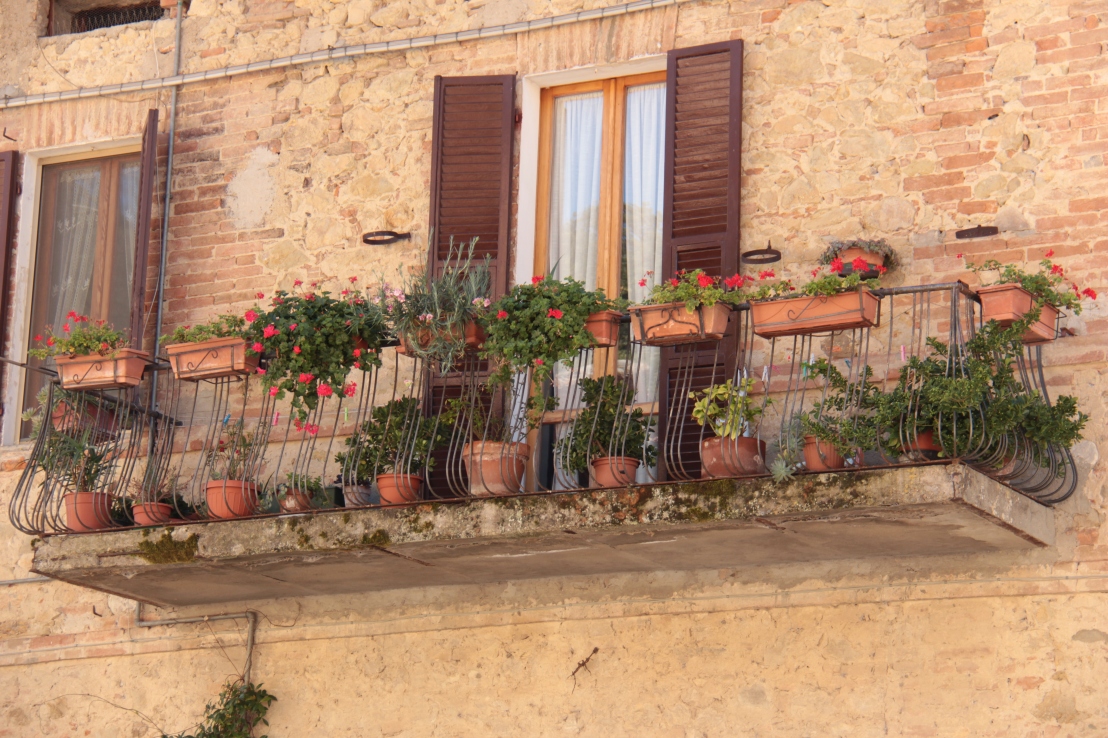 We were going to pop into the local store, but it was all chained up so went directly to the house. After we’d unloaded the car we walked down to the village to Poppy’s bar – when I asked about the supermarket the owner’s son told me it was closed for a couple of weeks then would re-open with new owners.

After a glass of wine for me and a coffee for Colin we went into Marsciano to stock up on food, as the fridge was bare. We had a fairly early night after two days of travel – it’s good to be ‘home’.