The last couple of days were relatively lazy – Friday because we just wanted to do nothing, and Saturday because it poured rain off and on the entire day.

Sunday we got up really early – 6:30 – so we could make the drive up north of Siena to watch the annual L’Eroica bike race. It’s a completely different kind of race than I’ve ever been to before – each participant rides a bike from at least 30 or so years ago – some much older – and they have to dress as one would have at the time. An acquaintance of Colin’s – Jay, from England – was riding in the event. There are several different courses, from short to medium to very long, and there were several thousand participants.

We were just getting ready to leave the house at about 7:20 when Jay phoned – he’d gotten about 20 km into the medium-length course when he encountered a problem with his handlebars. He hadn’t taken all of his tools with him, and because it was a really odd bolt no one else could help him either. We were going first to pick up Jay’s wife Alison at the place they’re staying anyway and she had the tool. 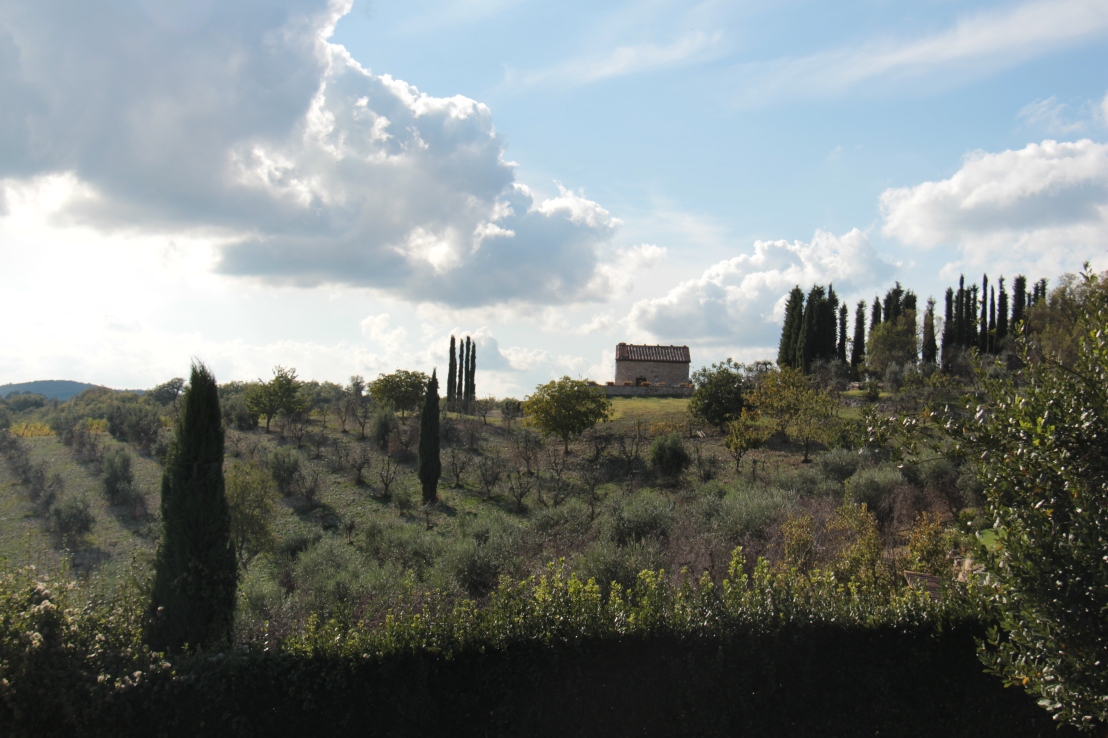 We left Papiano in a light rain, but fortunately the rain lessened the further we drove and by the time we passed into Tuscany it was starting to clear. We keyed in the GPS coordinates for the ‘village’ of Adine but realized that something was once again wrong – it was directing us to go past Siena to the west, but we knew we should actually be turning before Siena and to the north somewhere.

We followed the signs to the beautiful village of Lecchi in Chianti, then a bit further to where Adine was supposed to be. There really wasn’t a village – just a few farms and other buildings along a white dirt/gravel road. We stopped at the first large house, and an old lady came out to see what we needed. She suggested that we might be looking for the house along the road and up the next hill. She mentioned that there were no addresses, but that each house had a name instead.

Just then Alison returned Colin’s phone call, and she came walking towards us from around the corner of the house – she and Jay are staying in a lovely little stone cottage that used to house the chickens and some other small animals.

With Alison along we headed back down thru Lecchi in Chianti and on towards the town of Gaiole in Chianti (the ‘in Chianti’ is part of the name for many villages and towns in the area). Jay had been pretty good with his directions, so we turned before the town and took the road to Castello di Brolio, which was where he’d had to quit riding. It was slow going as other riders were all heading the same way we were – they didin’t stop the traffic in either direction for the event so we had to be extra careful. 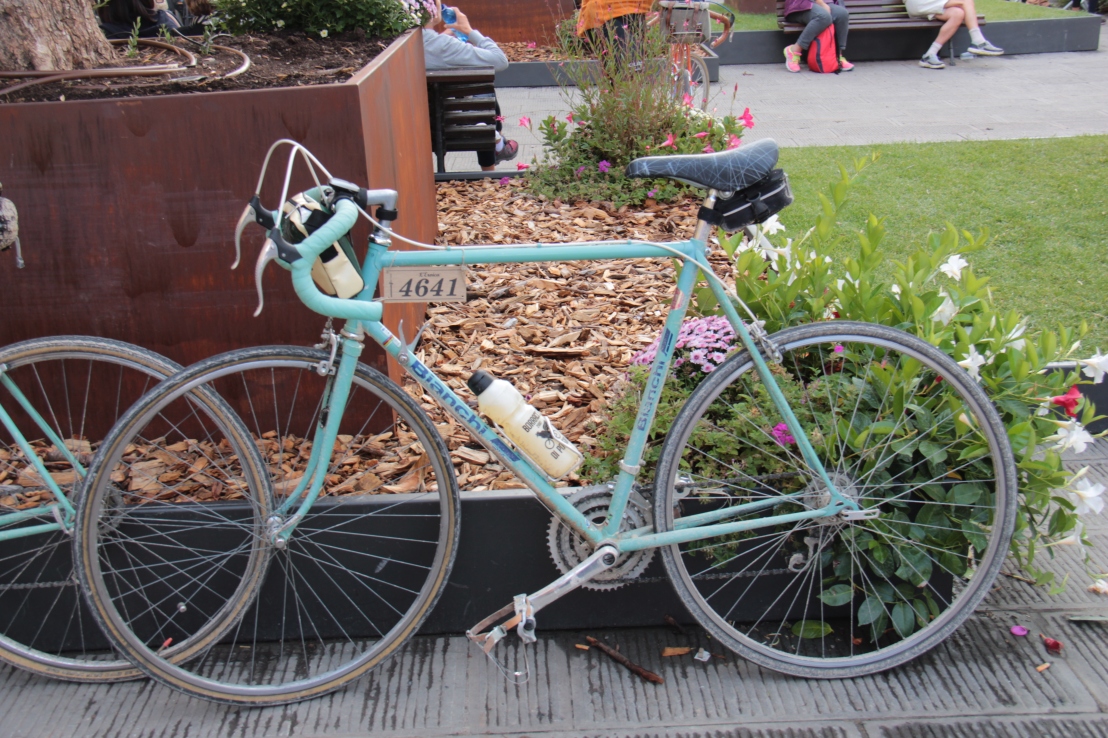 Jay was lucky to have been able to stop where he did – there was a cafe and tables and many of the riders were stopping there for beverages, including beer and wine. 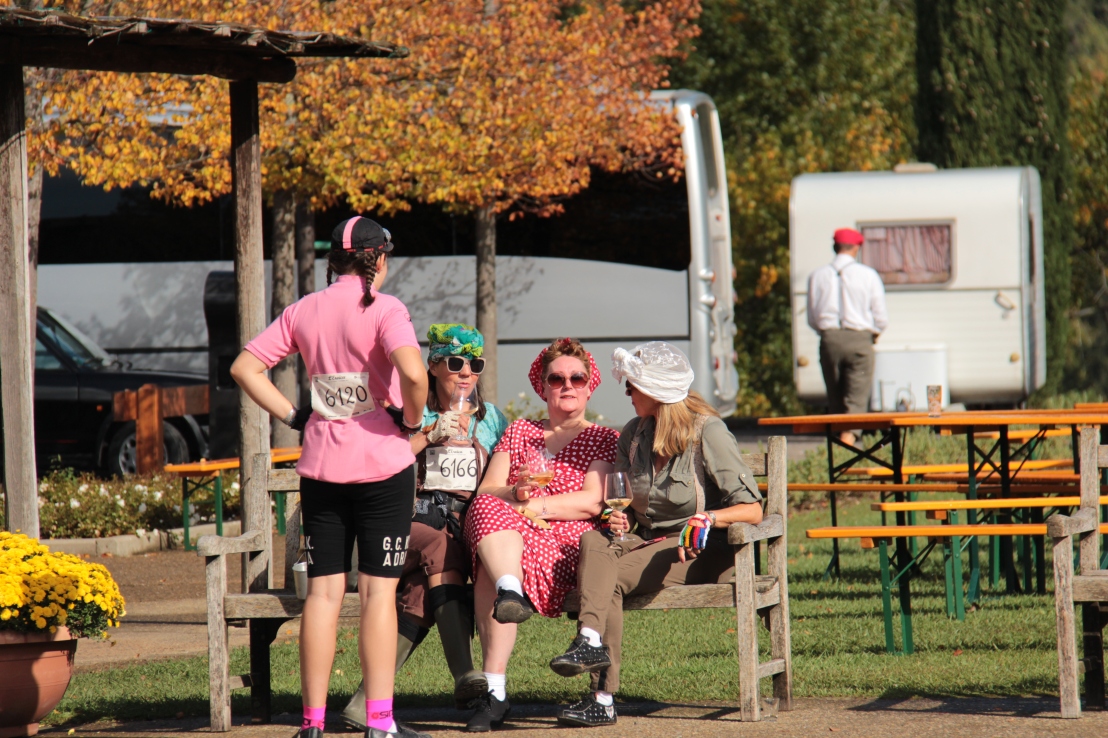 The tool Alison had brought did the trick – Jay was on his way again after about 30 seconds of work. He had originally wanted to do the 130 km route but was going to do one of the shorter ones because of his 3 hour delay. While he went off riding Colin, Alison and I sat down at the cafe for a cappuccino and some people watching.

Some of the bikes and outfits were so interesting – and I called it a race but it really isn’t. Just participating is the point, and showing the different types and styles of bikes and how they’ve changed over the decades. Folks come from many countries – I saw shirts that indicated Romania, Croatia, England of course, and many others. 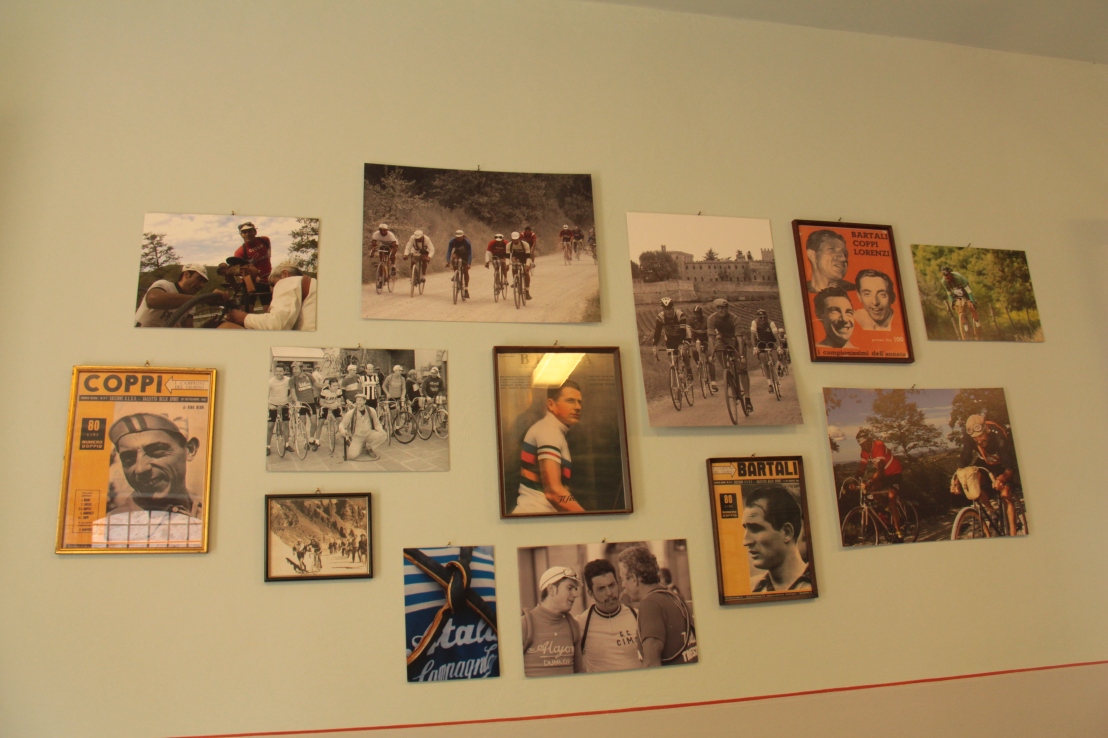 The cafe itself was dedicated to cycling, with posters and photos on the walls, as well as a classic old Bianchi. Outside was a Dawes, which is an old English bike, and apparently a bit unusual and of very high quality.

There was a couple on a little Lambretta motorcycle that were doing full-on repairs – they had a crowd around them needing assistance with their bikes, and they weren’t even at the white gravel sections yet.

After our little break we drove back down the road and into the town of Gaiole in Chianti and tried to find parking. There had been cars lining both sides of the road for the last 2 miles as we neared the town but we thought we’d lucked out at a little parking lot just as we entered the town. But we were just getting out of the car when we were told we had to move – it was for official cars and police only, although no one had prevented us from entering. The fellow was very nice and told us to follow the road we were on until we passed the stadium, then go to the right and there would be parking.

We found a large field that had hundreds of vehicles parked in it, but after driving slowly around the first part we gave up and went a bit further down the road. Right at the sign that points to the village of Vinci we pulled in and it was much better than the other field had been. We parked at the end of the first line of cars, and it was now warm enough to change into my rah-rah skirt and take a layer or two off the top.

As we walked thru the field towards the town we stopped to admire a couple of very old vehicles – one of the men recognized the maple leaf on my backpack and I heard him tell the others it meant I was from Canada – I confirmed this for him and he thought it was great that I was here for L’Eroica.

The three of us made our way into the centre of the town – there were food and beverage booths set up all over the place and people everywhere.

Boar is big around here – there were at least three booths that specialized in it.

We were all hungry and since it was around noon we chose a restaurant just past the finish line and actually had no problem getting a table outside. I chose the ravioli with ricotta and braised spinach in a truffle cream sauce – it was absolutely fantastic. Along with a nice glass – or two – of the house red wine, sitting in a lovely town in Toscana (Tuscany) surrounded by avid cyclists and enjoying it with excellent company I’m not sure what could possibly be better. Alison very kindly told us that lunch was her treat! 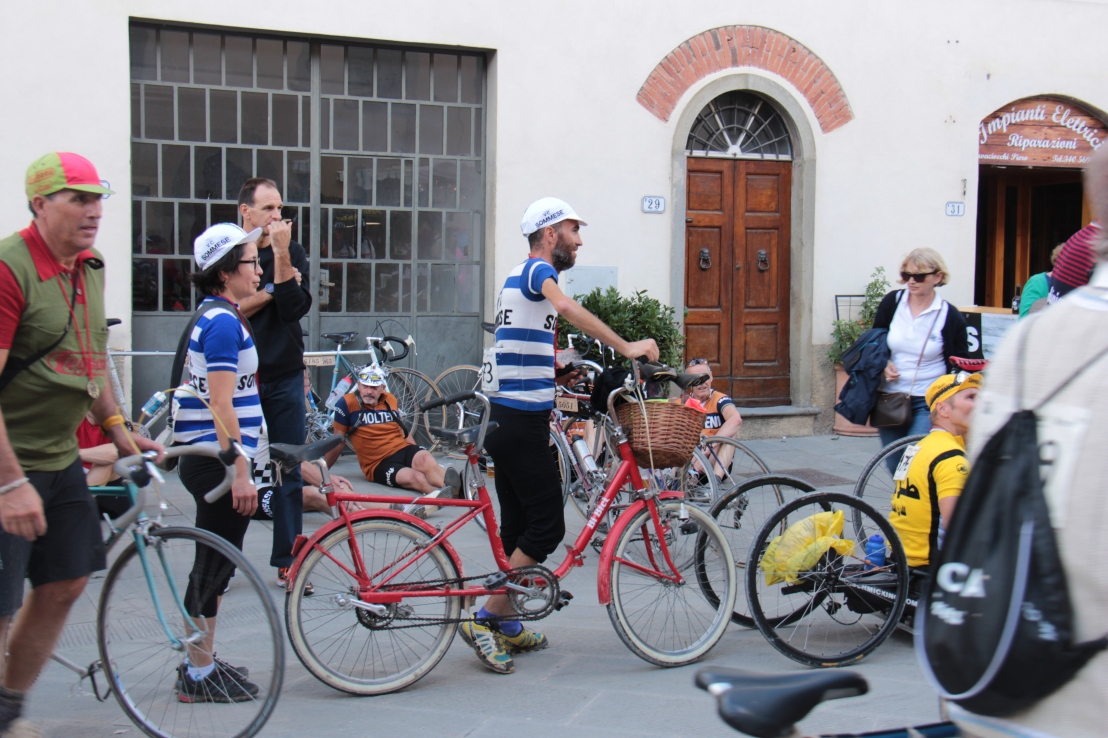 After we finished eating we walked further up the main road of the city centre – it was wall-to-wall people with bicycles just having a good time and enjoying the atmosphere. All of the cafes and restaurants were doing a booming business and everyone seemed to be having a great time. There were a few tandem cycles, as well as some recumbents. 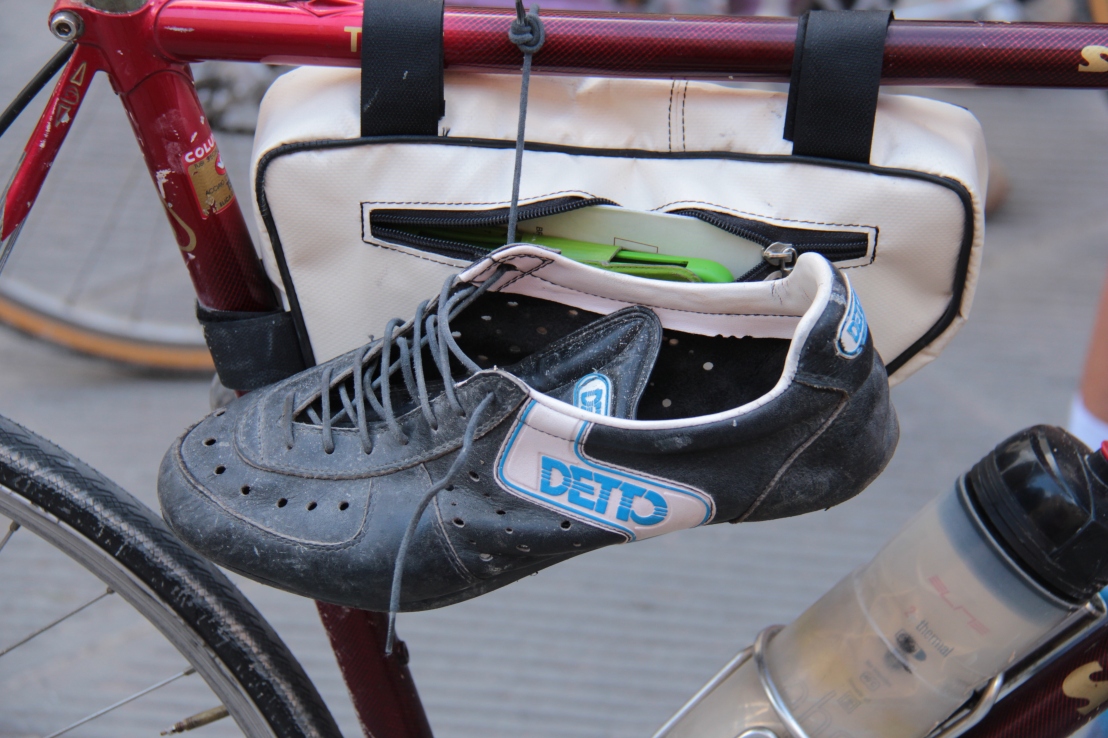 Alison phoned Jay and he was only about 5 km away from finishing so we found seats at another outdoor cafe/bar and sat down with a drink to wait for him to arrive.

He had no problem finding us and after spending a bit more time sitting we headed back through the crowds towards the car – hundreds and hundreds of riders were still arriving.

We eventually made it back to the car, and because of the amount of traffic and how slowly it was moving we thought it would be a good idea to go the other way when leaving the parking area – not necessarily a good idea.

Miss GPS kept telling us to do a u-turn and we kept thinking that the road we were on would eventually wind around the hill and get us back onto another road that would lead us to Lecchi or somewhere else – but noo – Miss GPS was actually right and we did end up having to turn around and go back through the town.

The traffic wasn’t as bad as we expected, only stopping completely a couple of times as the road was very narrow, cars were parked on both sides, traffic was trying to come and go, and there were people and bikes all over the place.

We finally cleared the town and got Jay and Alison back to their cottage. We said a fairly quick goodbye as it was still a 2-hour drive home for Colin.

We kept passing cyclists for miles and miles as we drove back towards Umbria – they must have taken the long route and still had a good hour or two of riding to get to the finish.

As we got to Lago Trasimeno we thought it would be nice to follow the lake for a bit so turned off the highway – it was very lovely but then we chose a road that ended up leading us back to Perugia so it wasn’t much of a short-cut after all.

Back at home we were both still pretty full from lunch, and a bit tired from having gotten up so early so didn’t really have dinner. Colin packed it in around 8:30 while I managed to stay up reading until around 10:00 – tired but very satisfied with what had been a wonderful day.