Yesterday was mostly getting ready for our next little trip – buying a few groceries, etc. We managed to leave this morning right at 9:00.

As usual our destination was entered into the GPS while I followed our progress north using the map book.

We took the toll-highway most of the way, skirting Firenza, Bologna, Modena and Milano. Right around Reggio Emilia we passed the train station that looks like a wonderful origami sculpture.

After Milano it was regular highways until just south of Lecco, where we were slightly mis-directed because of road work that Miss GPS didn’t know about.

We got back on the right road, then partway between Lecco and Como we turned north towards the interior of the ‘peninsula’ between the two southern arms of Lake Como. Once again we took a very circuitous route through one of the villages, but eventually were cruising in the right direction to the town of Magreglio.

Since we’d arrived fairly early we went for a drink (ie: coffee for Colin, red wine for me) before trying to track down the apartment. There’s a small church and a bicycle museum right at the northern edge of the town, and it has a pretty good view of part of the lake and the mountains beyond.

There’s also a really cool monument/statue to cycling right at the top.

There are, of course, many cyclists around the town – a whole group arrived at the cafe just before we left. A local fellow was reading the sports journal, which is on pink paper – the colour of the original sponsor of the Giro. 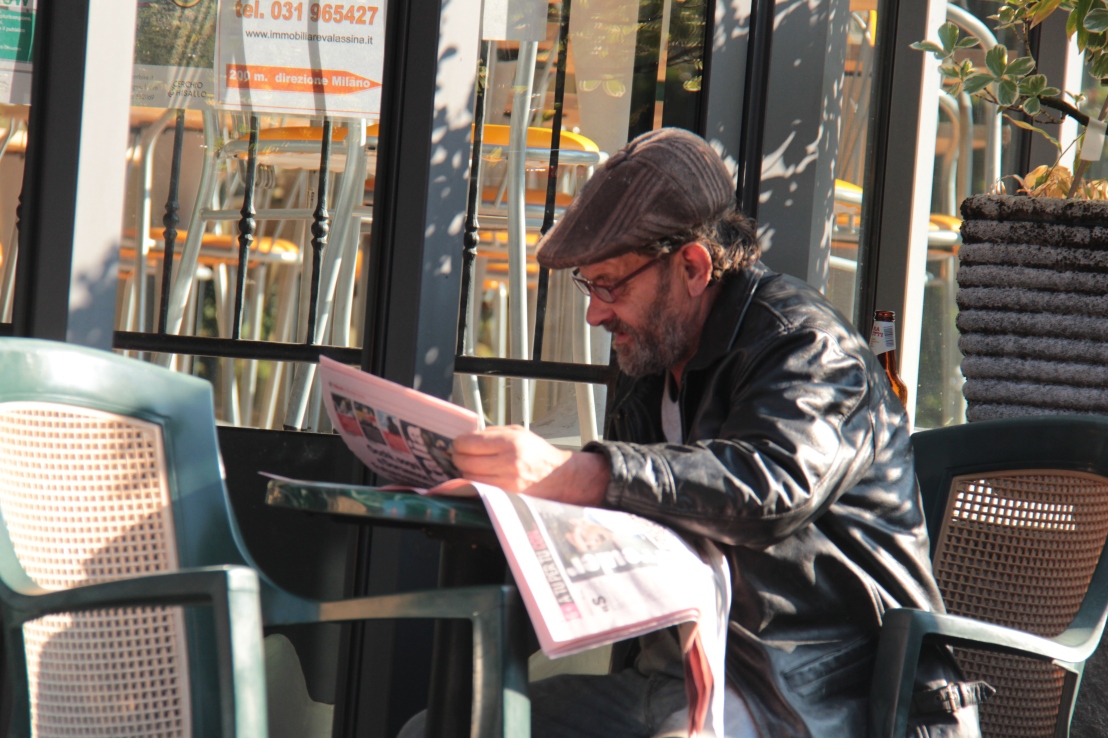 Some of the arriving riders spoke English and some sounded German as well as other languages.

We drove to the apartment and called the landlady, who arrived about 3 minutes later. She showed us the place – it has a large kitchen, two bedrooms and a nice bathroom, in addition to having a nice large private terrace. She seems very nice and is into cycling – there are lots of photos and prints on the walls as well as other cycling paraphernalia all over the place.

We brought our stuff in then walked down about a block to the local supermarket to get a few things. Dinner was pretty simple – fresh pasta with tomatoes. Fairly early bedtime.