Got a fairly good sleep – the folks upstairs were up and making noise very early, but it’s an older building and not that soundproof. I made a cup of tea – very small, as they only expect people to drink espresso or cappuccino here, I guess – and went out onto the terrace to do a little bit of stretching as the sun peeked over the mountains to the east.

We got going around 10:00 – first took a drive past the church and down the hill a bit – the racers will be coming up it about 5 hours from now. We turned around after about a mile and came back up to about 300 metres from the top and parked in a pull out on the left hand side. There’s a large group of Pantani fans two corners below us – I suspect they’re having beer for breakfast.

We then walked up to the restaurant that we get our free breakfast at – also owned by our landlady Florianna. She was very happy to see us, and we got a table outside overlooking the main road and just down from the church and cycling museum. Breakfast was very simple – cappuccino and croissant – but the location more than makes up for any perceived lack. 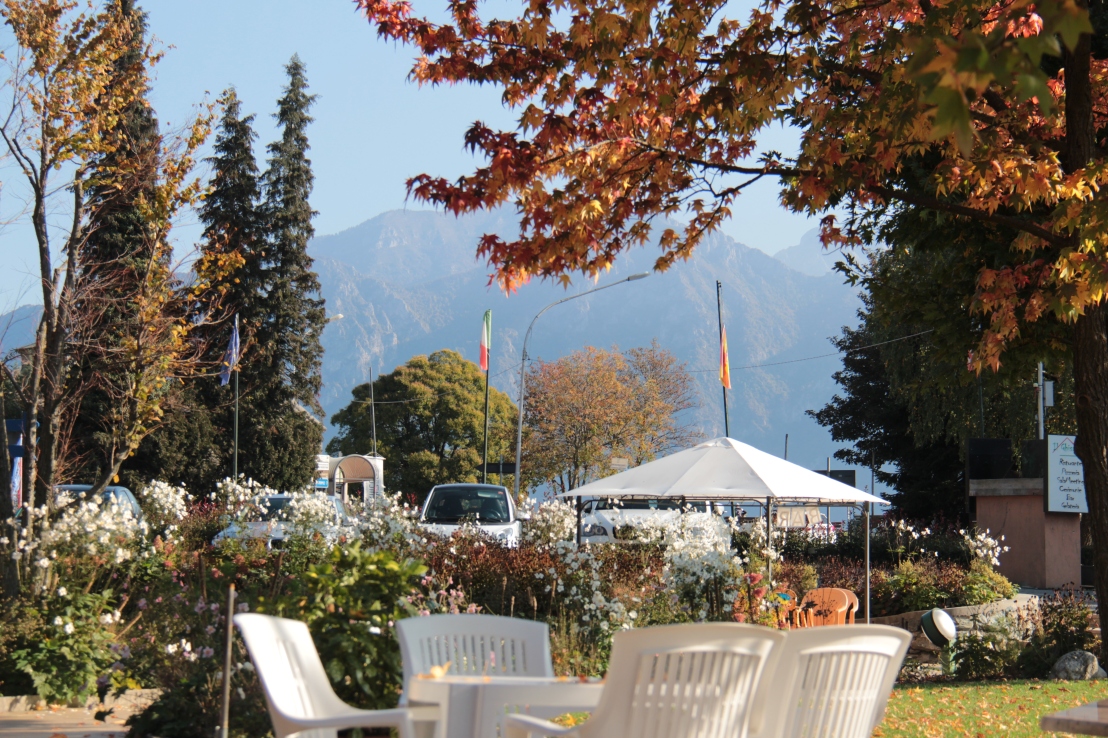 After eating and sitting for awhile we walked across the road and had a wander through the museum.

It’s a really excellent display of old bikes, photos from over 100 years ago, winner’s jerseys from many of the Italian races, including the Giro jersey won by Cdn Ryder Hesjedal in 2012. 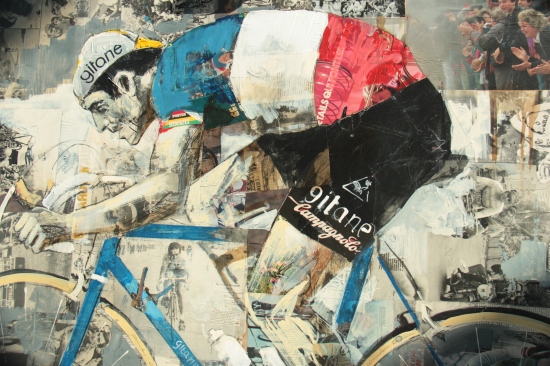 After our lovely museum tour we headed down to the car and setup the flags as well as the table and chairs. The breeze is pretty good so hopefully the flags will fly well.

I then took a walk down the hill a bit to the Pantani corner – they welcomed me very warmly and fed me BBQ pork ribs and red wine. One lady spoke a bit of english so I stayed for a little while and chatted. 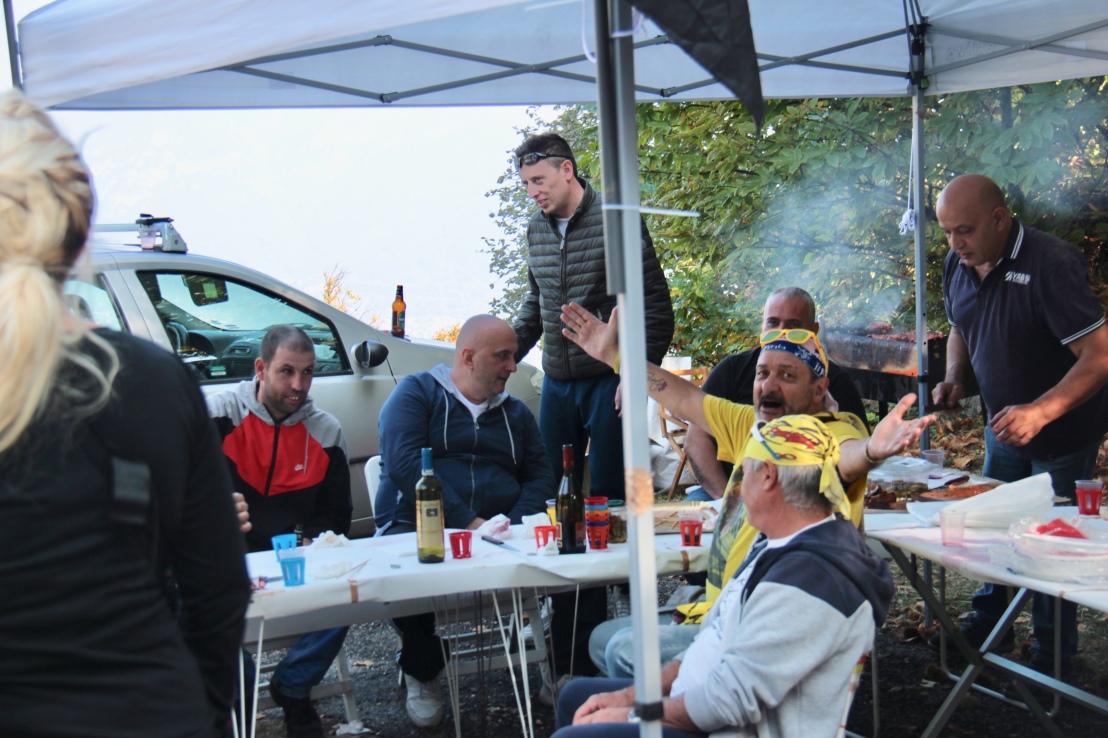 Upon returning back to the car I had a little more to eat – unfortunately I’d forgotten to bring some forks for the greek salad I’d made, but the boiled eggs were good and you don’t need a fork to eat carrot sticks or peanuts.

My next trip was up the hill – I walked with an American fellow that had passed the car and stopped to chat with us. He and his wife are in Italy for a year on an extended traveler’s visa – wish I could get one! Once we’d reached the top of the hill he left to find his wife, and then I heard my name being called from across the road. It was Florianna so I crossed over to say hello. She then told me to follow her and led me into the little church. 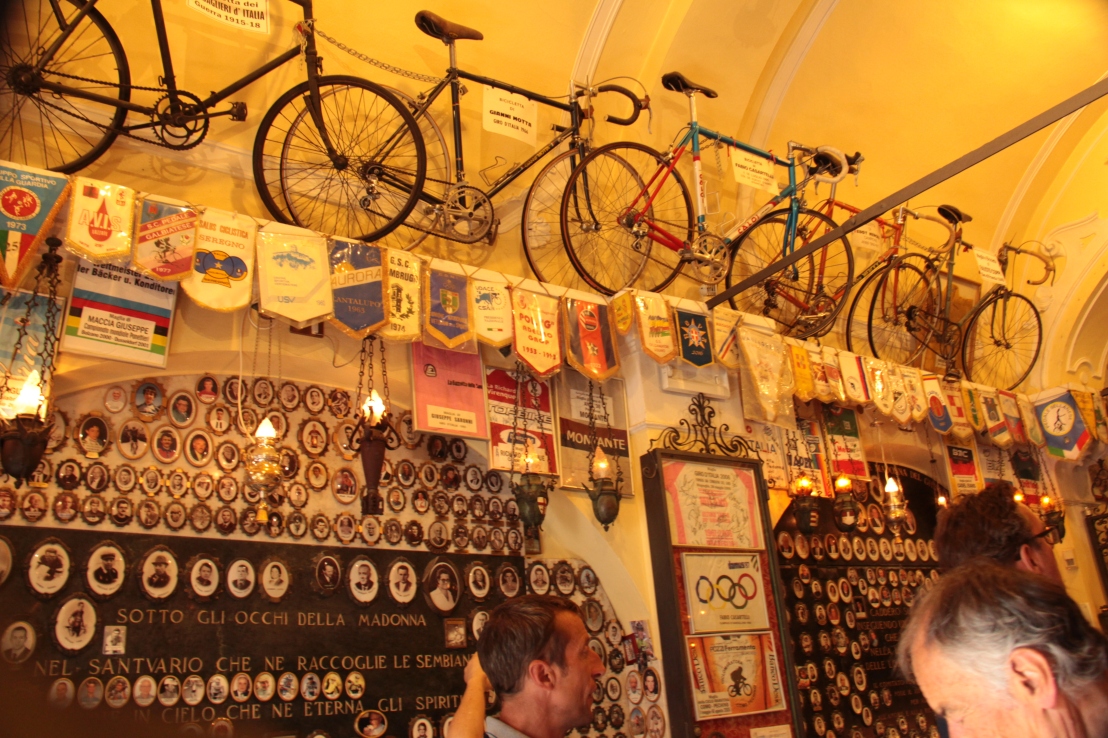 It wasn’t what I expected – it was quite small, and was really a church to cycling, with old bikes mounted near the ceiling, lots of photos and jerseys – kind of like a smaller version of the museum.

It was quite crowded, so she grabbed my hand and led me to the back, then through a side door. There was a little old man there, and his job was to stand on a chair and look out of a small window to see down the hill when the racers are coming. When he sees them he rings the church bell so folks know they’re getting close. I got up on the chair to have a look out, then he held my arm as I stepped back down. 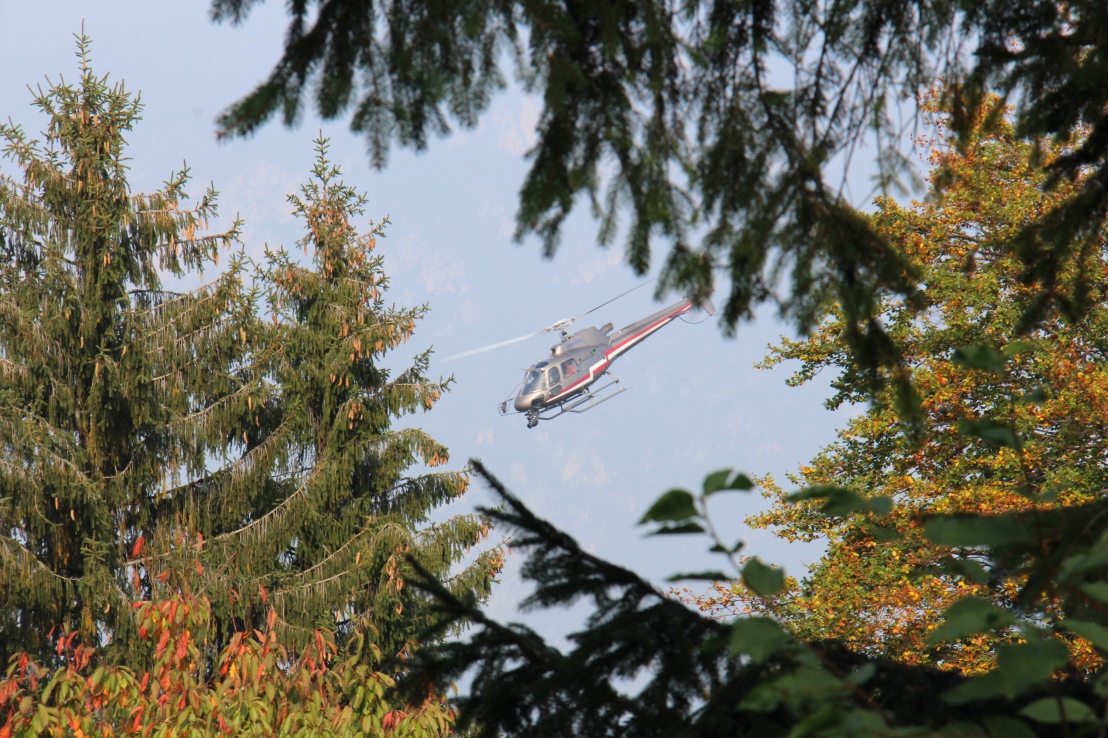 I then went back to the car as the racers were expected to arrive shortly, and I’m glad I did – they were ahead of schedule and arrived around 2:55. There was a breakaway of four, followed by a couple of solo racers, then the peloton only two minutes behind. I tried out the nifty flash that Colin got me for a late birthday present – the racers often have their heads down as they ride and it leaves their faces in shadow, so I was quite pleased with the results.

About third man back was last year’s winner Vincenzo Nibali (in orange/red and blue), followed very closely by current world champion Alejandro Valverde (in white jersey with rainbow around the middle). Cdn Michael Woods – third at the world’s just two weeks ago in Innsbruck – was about the middle of the pack.

After we took down the flags we drove the short distance up the hill to the restaurant and watched the last 70 km of the race on their tv. It was eventually won by Frenchman Pinot, with local favourite Nibali coming a very impressive second – he did, after all, fracture a bone in his neck at the Tour de France in July (an accident caused by an f’ing ‘fan’!!) and had it cemented together so he could ride again.

Following the end of the race we went back to the apartment for a bit, then returned to the restaurant for dinner. We chose the set menu, which turned out to be about three day’s worth of food for me. It began with polenta, which was three very large tasty pieces, with a slice of sausage of some sort. The second course was a delicious fettuccine with potatoes and cauliflower, and the main course was roast beef with gravy and sliced roasted potatoes. I tried my best to eat as much as I could, and Mo did her best to help.