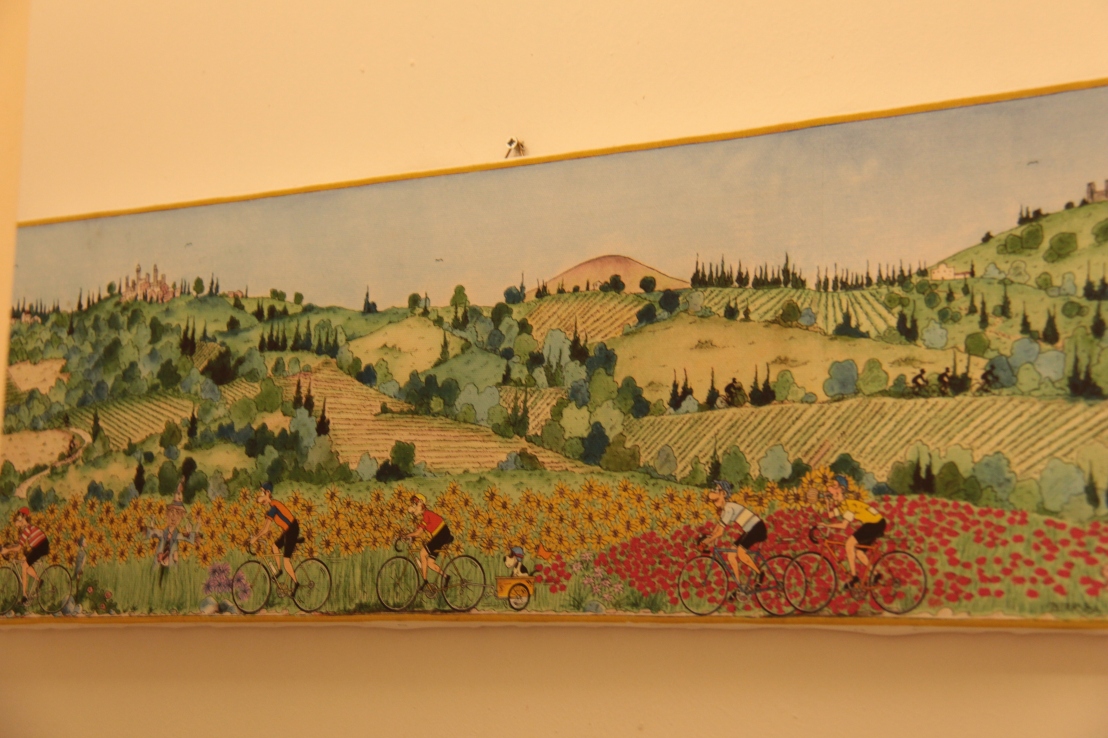 Got up at a decent time, had a cup of tea on the terrace, packed up and left the apartment to go for breakfast again at Il Ghisallino restaurant. 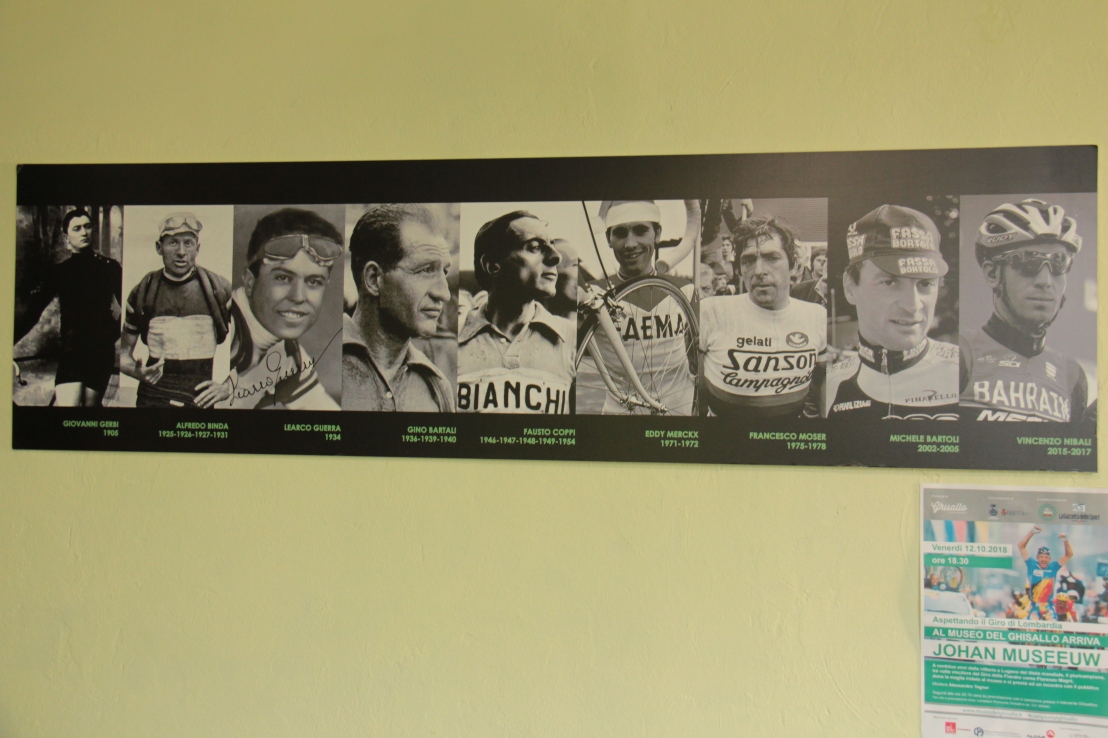 We stopped on the way so I could take a photo of the cannon in the churchard at the bottom of the street – the muzzle of it is stuffed with flowers. Why fire shells that kill when you can send missiles of beauty and love instead? 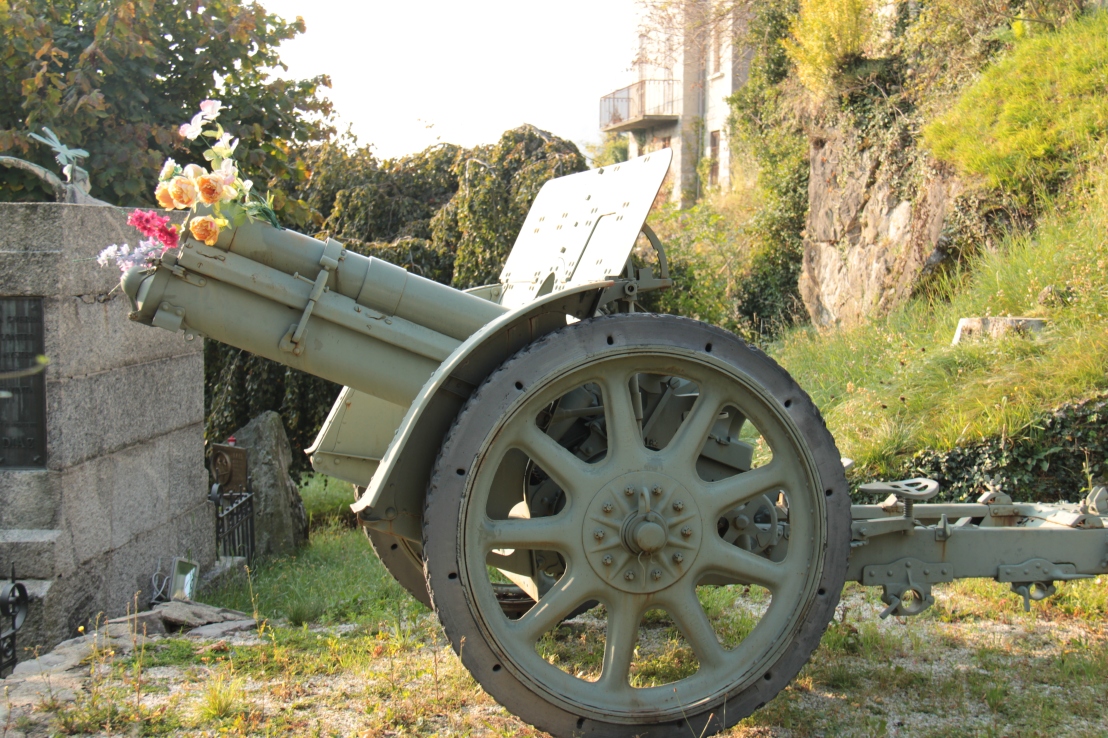 Returned the key to Florianna and enjoyed our cappuccinos and croissants on the terrace as the amateur Grand Fondo happened on the road below us. There’s about 1,500 riders, and they’re following a different course than the Lombardia yesterday, but are still using the climb to Magreglio. There was a food stop just across the road, at the parking lot in front of the church and cycling museum, and since they’re not actually racing many of them did stop and get refreshments.

We wandered over to the church so Colin could have a look inside before we headed down the mountain to the town of Bellagio, which is right on the northern tip of the promontory. 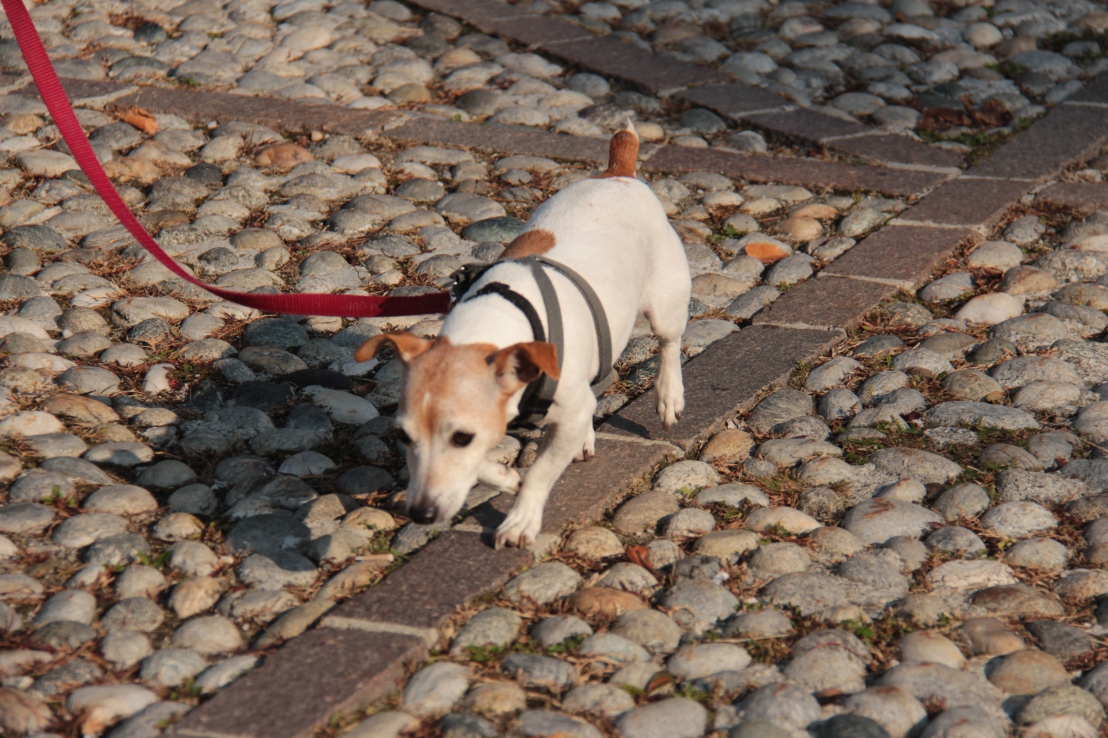 The fairly long walkway from the parking area to the church is covered with cobbles, but had a pattern of thin bricks along it – Mo didn’t like the cobbles and was so cute walking along the bricks instead. 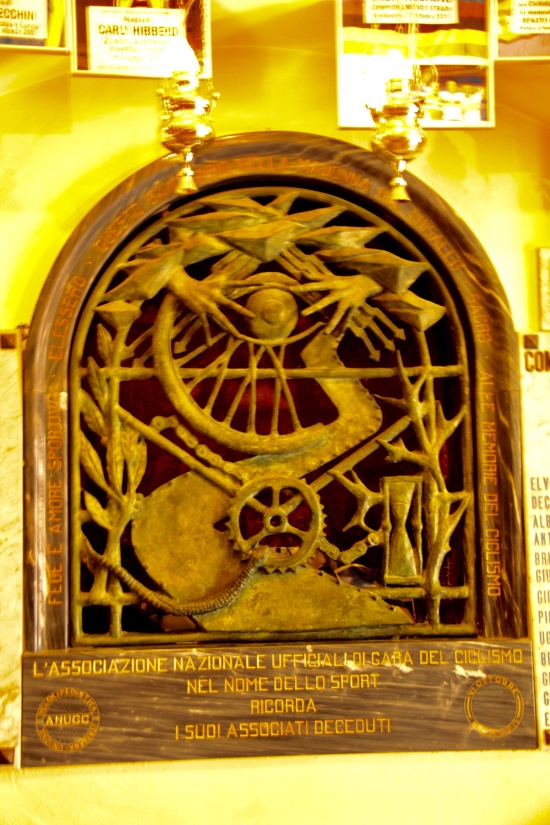 The road down to Bellagio is over 8 km and was packed with hairpin turns, so the climb up it must have been horrible for the racers yesterday, as well as the Grand Fondo riders today.

The town of Bellagio is very pretty – its been the vacation destination of many rich folks over the years going all the way back to the Roman times. This area doesn’t get really cold in the winter – even though it’s in the Alps – and doesn’t get that hot in the summer. Ideal combination of lake, mountains, scenery and weather – if only there weren’t any crowds as I bet it gets very busy in the summer.

Our plan was to drive south along the promontory, which is the east side of the western arm of Lake Como to the city of Como, then all around the lake going up the western side to our next destination of Colico, which is right near the northern end of the lake. I’d really wanted to see all of the lake, so this was my idea – sounded like a great plan and a beautiful drive…but…

…between a combination of hundreds of amateur cyclists – going in both directions, sometimes – an extremely narrow road with a rock mountain on one side and either rock walls or drop-offs on the other, and crazy impatient Italian drivers – dickheads!! – it was pretty close to the worst drive we’ve ever had.

The scenery, from my point of view in the passenger’s seat – was awesome, but it wasn’t at all enjoyable for Colin – super stressful to have a driver come up behind and get totally outraged because there was a cyclist ahead of us and we wouldn’t pass until it was actually safe to do so – at least without sideswiping the bike and sending them hurtling over the rock wall/cliff into the lake far below.

The relatively short drive to Como took almost two hours, and needless to say our plan for the day changed. As soon as we finally arrived in Como we went east towards Lecco instead of west and stopped at a cafe for a mental health break. I bought Colin a cappuccino and double mint chocolate gelato to try to calm his nerves a bit. It had been an extremely unpleasant drive and we needed to regroup.

After our little break we went through Lecco and veered north, but rather than take the lakeside road we took the other one a bit east that went through the Valsassina pass. It was a lovely drive, and totally got us away from the crowds of crazy drivers. 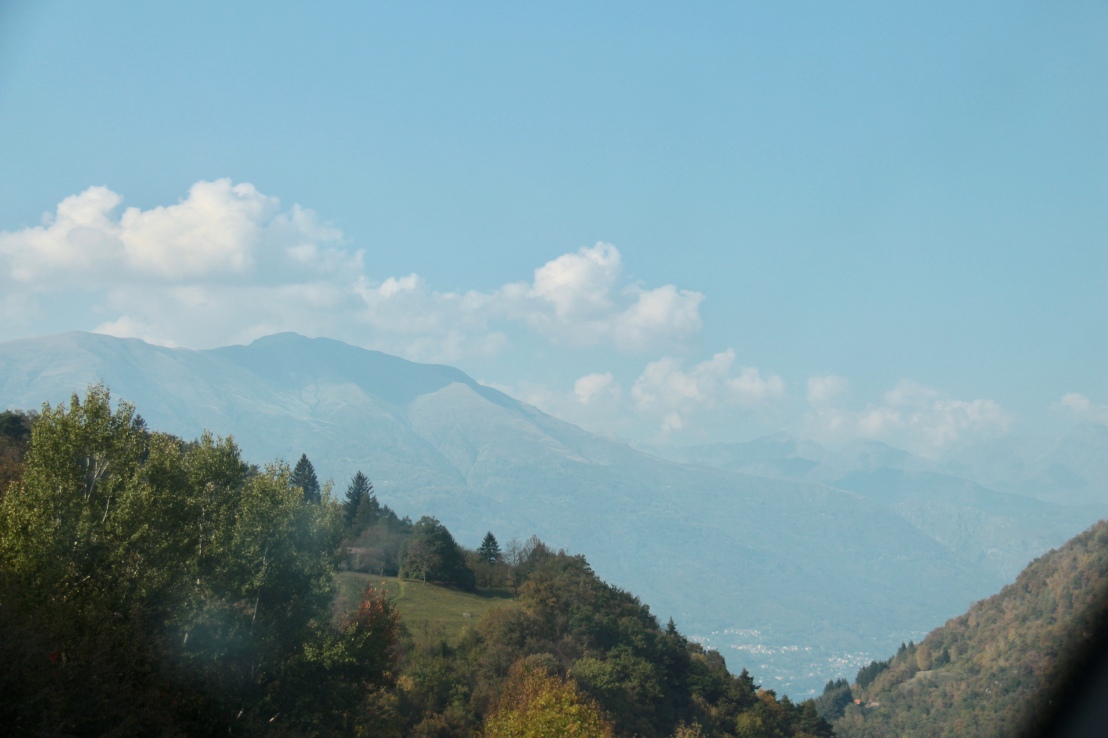 We did end up having to follow the lake a bit to get to the town of Colico, which had a lovely boardwalk all along the lakefront, with several nice restaurant/bars around a nice big piazza. There was a bit of a market happening and lots of people enjoying the sunshine and fresh mountain air.

There were dozens of sailboats and para-gliders and the little ferry was shuttling back and forth across the lake – it was beautiful.

We had a leisurely and relaxing drink outside at one of the restaurants – not the cheapest, but very nice – and I guess you pay for the location. In general it reminded me very much of home although the mountains are bigger.

Colin got ahold of the lady he’d rented the apartment from and she told him how to find it. It’s on the main road just before the town.

The apartment is quite nice – it was a small front yard and a larger back one, a nice new bathroom and fairly large kitchen/living area. Colin and Mo got a decent sized bedroom and I got the sofa that pulls out into a bed.

After we’d settled in a relaxed a bit we went out to get pizza for dinner. We ended up at the same place as before and they sent us upstairs to the pizza making area – Colin got the Hawaiian. It was pretty good – nice thin crust and tasty smoked ham with asiago cheese on top. I took half of mine home for breakfast and lunch tomorrow.