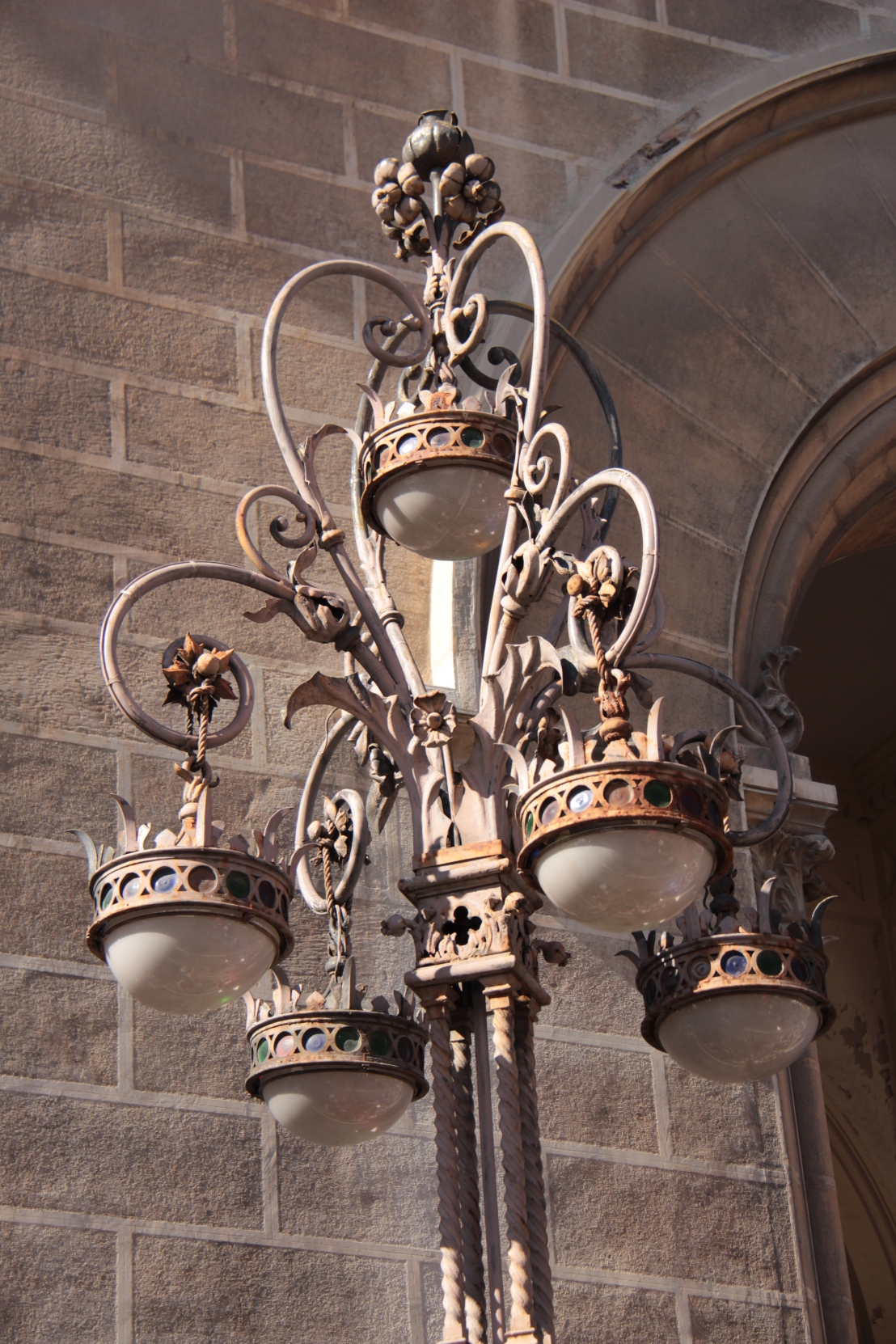 Left the house around 10:30 for Leroy Merlin so Colin could arrange installation of the wood-burner. Rather than going in I stayed outside with Mo – took her for several walks around the parking lot and gave her some water. It’s still beautiful weather – sunny and over 20.

After almost 90 minutes Colin finally came back out – he had good news and bad news. The bad news is that the necessary part had to be ordered and could take as long as December to arrive – typical for Italy. The good news is that Colin can’t wait that long to go to England so will be driving up there within the next couple of weeks – I get a ride instead of having to make my own way there. The wood-burner installation will be taken care of when Colin comes back to Italy in February.

We were both getting hungry and had already decided to check out Perugia a bit – we’ve been past it frequently, but never really explored it at all. We put the location of a parking area into the GPS and headed on into the city. As with most of the cities over here the older part is on the highest hill – luckily there’s a series of escalators to take you much of the way up, although we did still have to climb quite a few stairs. 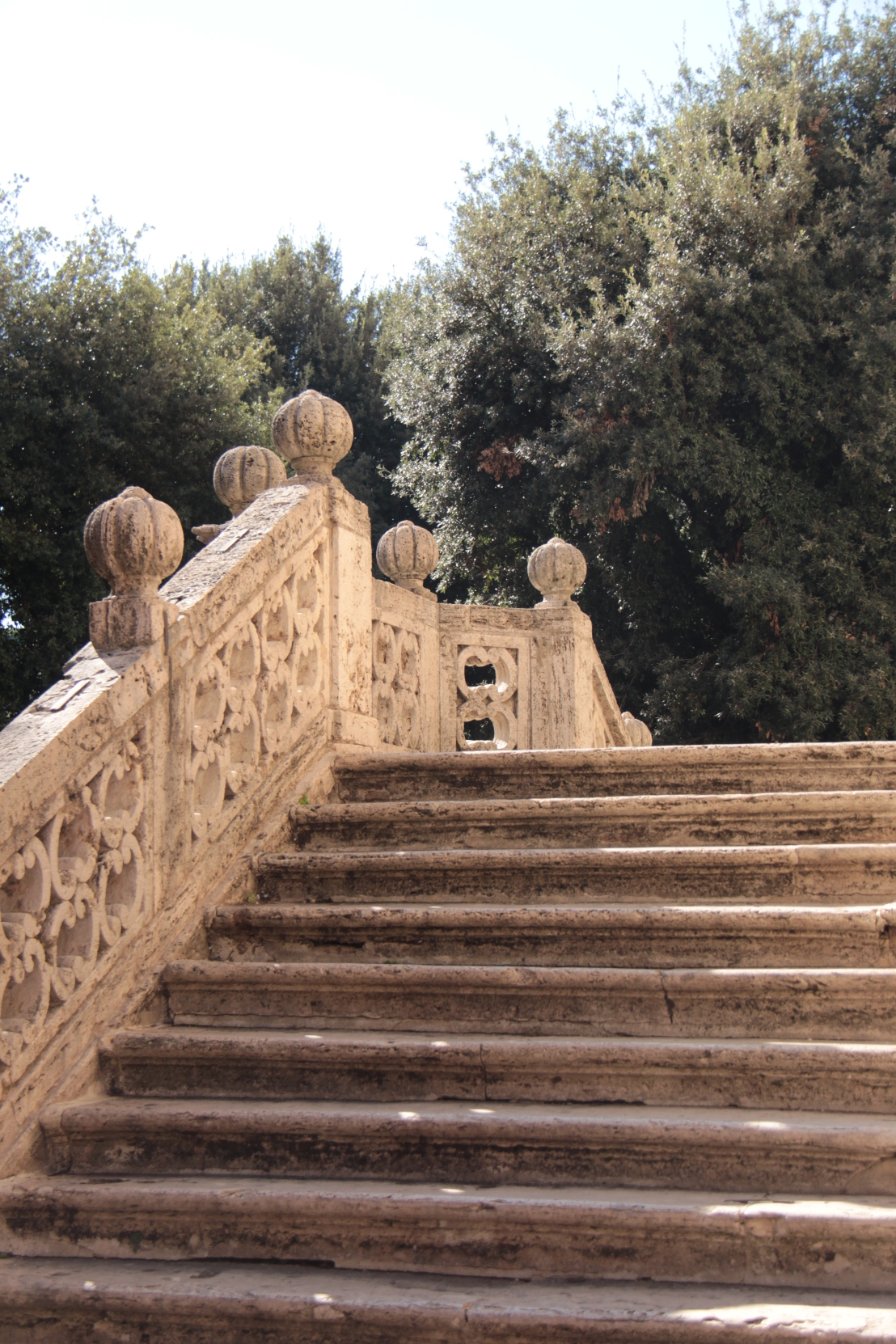 We noticed that there were police and private guards all over the place, and when we reached the first piazza we saw a sea of covered stalls and masses of people – we thought there was a market on. 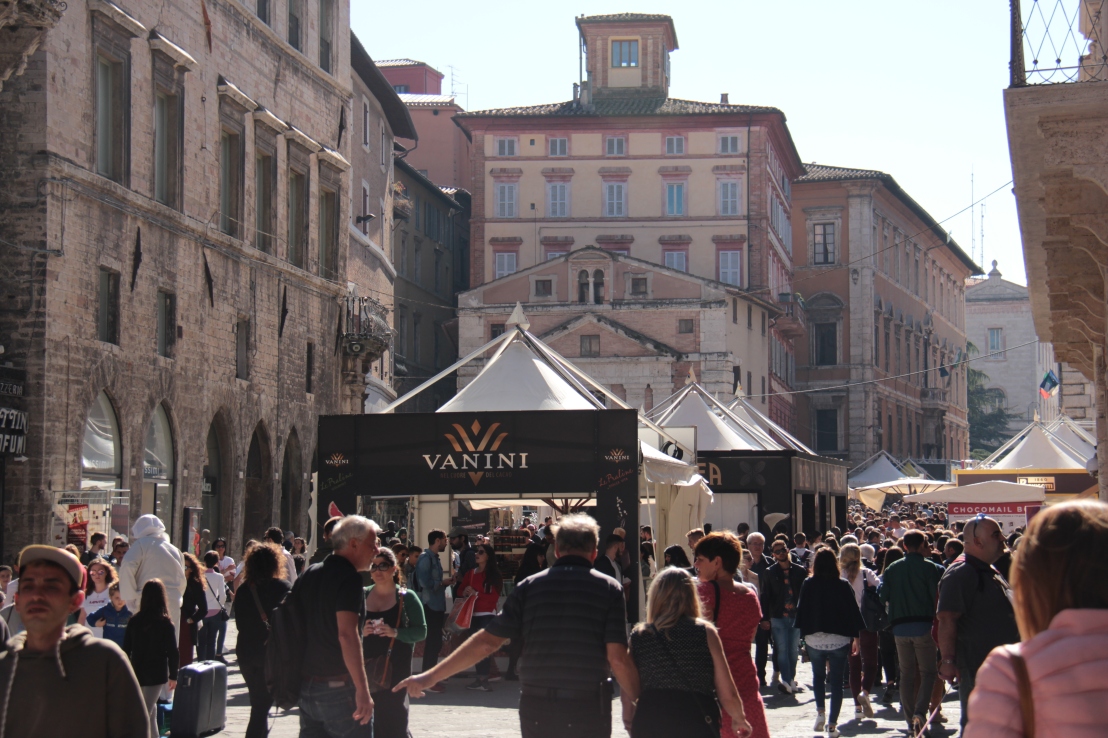 Then we realized that all of the stalls were selling chocolate products – it’s the annual chocolate festival.

In addition to the stalls there was entertainment – a brass band, balloons for the kids, folks dressed in bright costumes, etc. 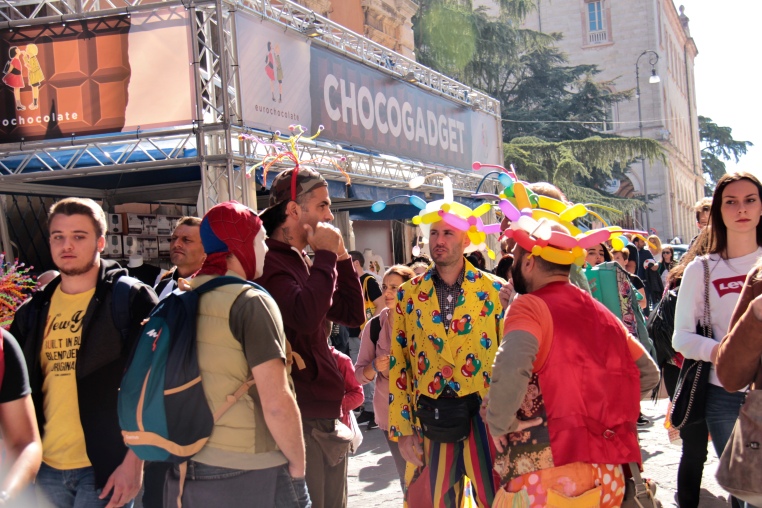 We made our way to another piazza – this one had the Perugia Cathedral and the Fontana Maggiore.

The cathedral is kind of different – not what you might expect. It’s very plain on the outside, but apparently has some nice stained-glass windows and paintings inside, although we didn’t go in.

The fountain is even older than the cathedral – it was completed in 1278. A little more walking brought us to some government buildings with a statue of Vittorio Emanuele II on a horse in front, he was the first king of a united Italy in 1861.

There are some spectacular views – you can see for miles across the plain below and to the mountains in the distance – just beautiful.

We started back towards the car park, intending on choosing a restaurant along the way to have some lunch. One outside place had a single empty table, but it had a ‘reserved’ sign on it. 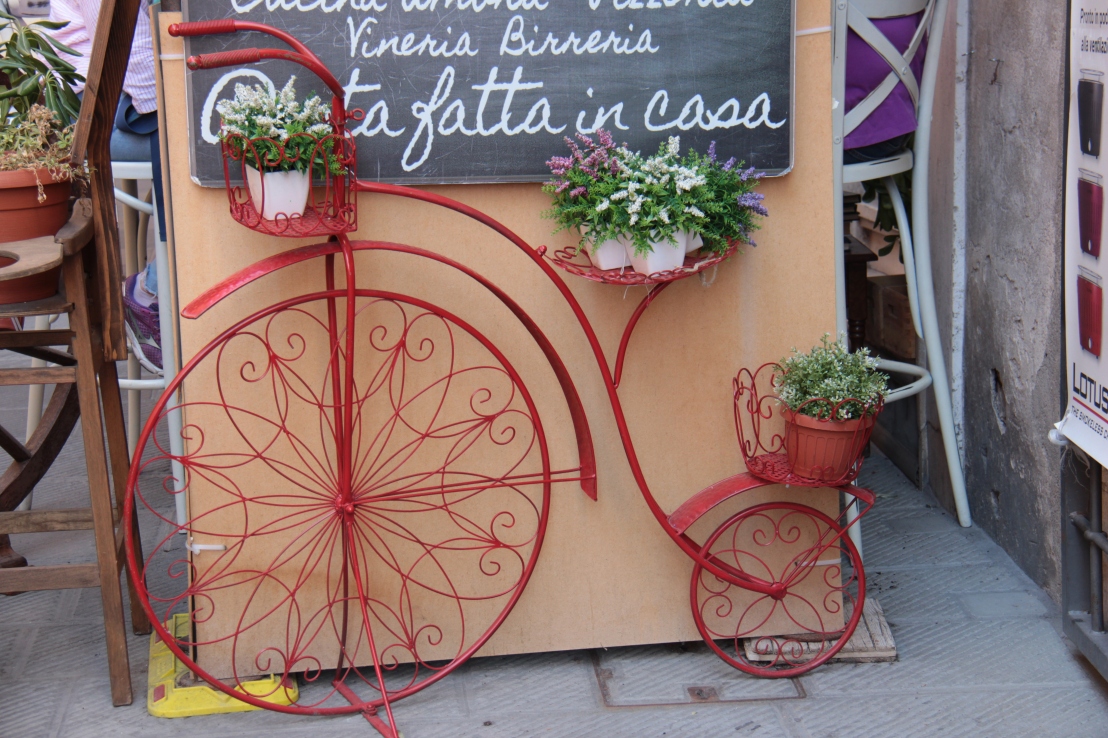 We went to the entrance of the place and asked if they had any available tables inside. He said yes and to follow him – he led us through a bit of a maze, down some dark stairs and around a couple more corners.

There was a fairly large restaurant in the basement and we were taken to the very back and sat beside a couple that also had a small dog – even smaller than Mo as it was a young chihuahua.

The place was decorated to the max – tons of photos and things all over the walls, the tables and chairs were all different and un-matched, as were the dishes. It was all very nice, though – not just junk – and we were sitting right next to a piano – don’t know if it worked, though, as I decided the other diners didn’t need to hear me play chopsticks – it wasn’t a chinese restaurant, after all. 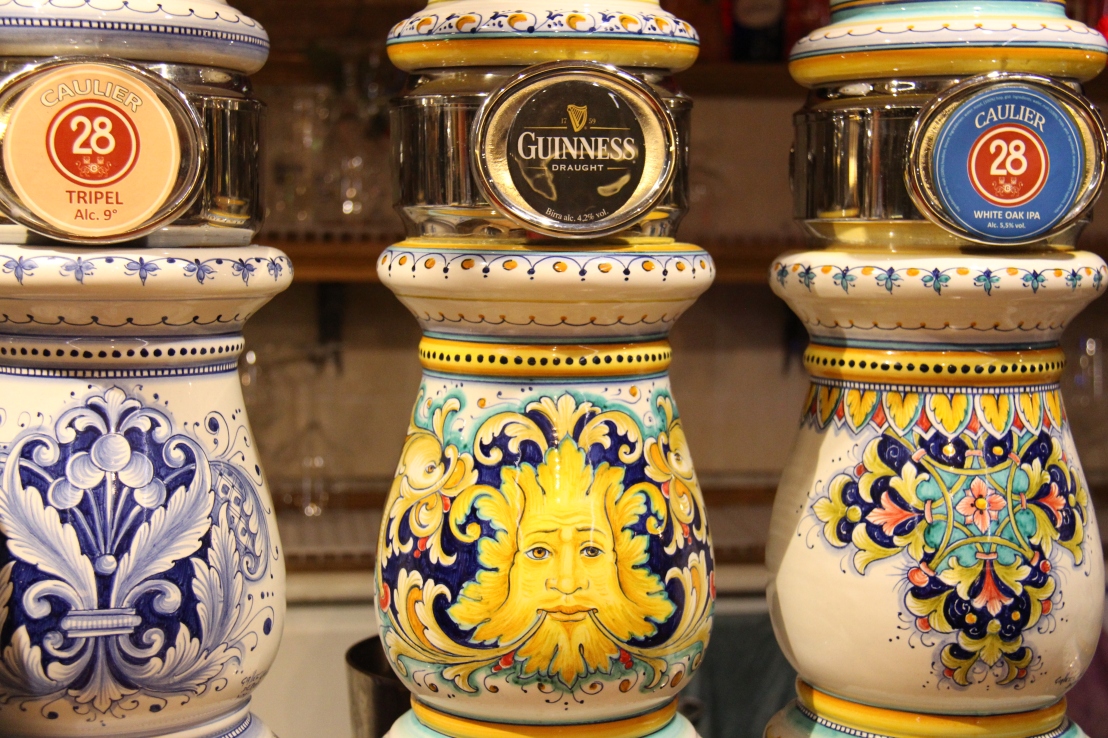 Colin chose the lasagna while I got pappardelle (wide flat ribbon pasta) with wild boar ragout – a great choice. We washed it down with some house red – a local Merlot – that was also delicious. The WC was lovely – I almost returned with my camera to get a photo.

When leaving we exited by a different door – right out onto the street. The restaurant is on a hill, so the basement is also at street level – no having to make our way back up the dark stairs and through the maze.

We stopped at a bar along the way so Colin could get a cappuccino – it was at a bus station but was surprisingly nice, and the lady fussed over Mo, as so many folks do.

We managed to find the car park with no problem, and headed towards home, stopping to get some groceries along the way, then again at Poppy’s for a quick glass.

The black cat tried to get in the house when we arrived – we had to shoo her through the entrance and down to the terrace. I emptied a small can of soft food and some crunchies into a bowl and Colin put it down for her.

After she was done eating she still wanted in and rubbed against my leg purring like mad but I didn’t want to get slashed or bitten again so refrained from petting her. She seems so affectionate, right up until the claws and fangs come out.