Woke up to cold rain, although it had snowed a bit during the night. Had a lovely hot shower – the room itself is really nice but the bathroom is extra special. Colin had paid for breakfast so we went down to eat fairly early – it said ‘buffet’ so we didn’t know what to expect. Sometimes all you get is white bread and a cup of tea or something.

But part of this place is, after all, a spa, and we all got the same buffet to choose from – it was the best breakfast spread I’ve seen in a long long time. There was the fresh fruit area, cereals and granolas of all descriptions, cold cuts and cheeses, an entire prosciutto leg to cut from. But we both dug into the hot breakfast selections – I chose bacon, sausage, mushrooms, scrambled eggs, fried zucchini and tomatoes, whole grain bun and camembert cheese.

The waiter brought us each a pot of tea and we dug in – it was all very good, especially the mushrooms. I was tempted to go for another plateful but decided not to – I was already so full I could barely get up. Mo also thought the sausage was good, but didn’t get to sample the mushrooms. 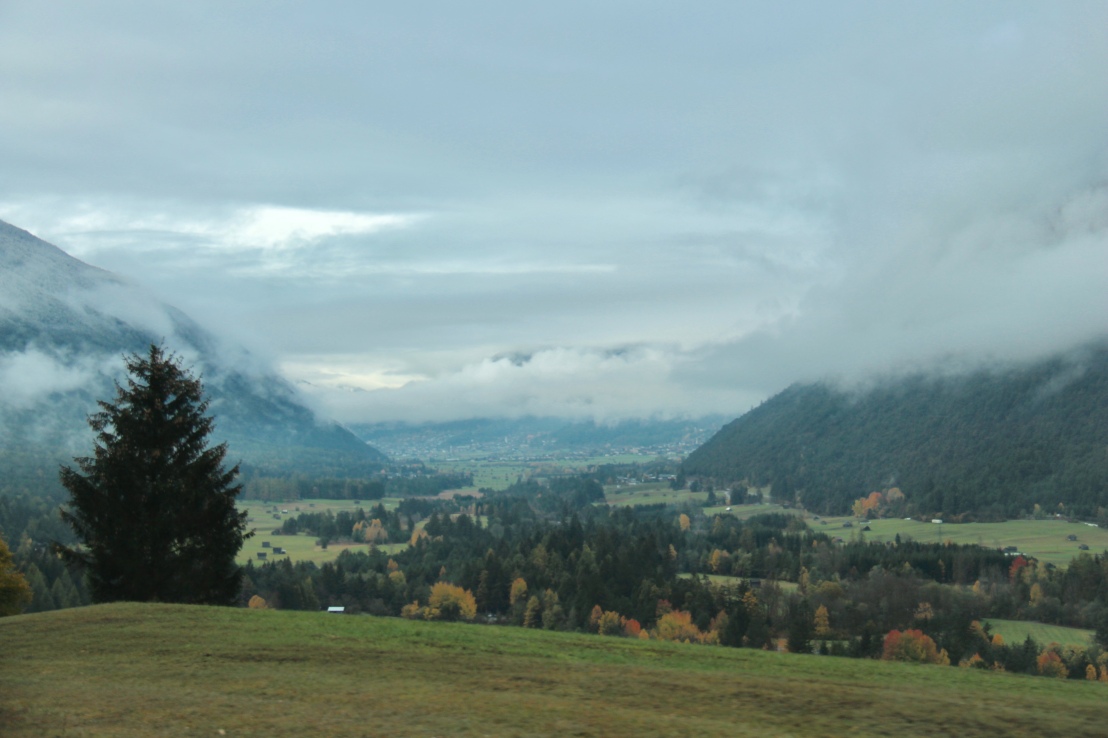 We packed up the car and left just before nine, avoiding even going into Innsbruck but heading west to Telfs then up through the mountains to the northwest. 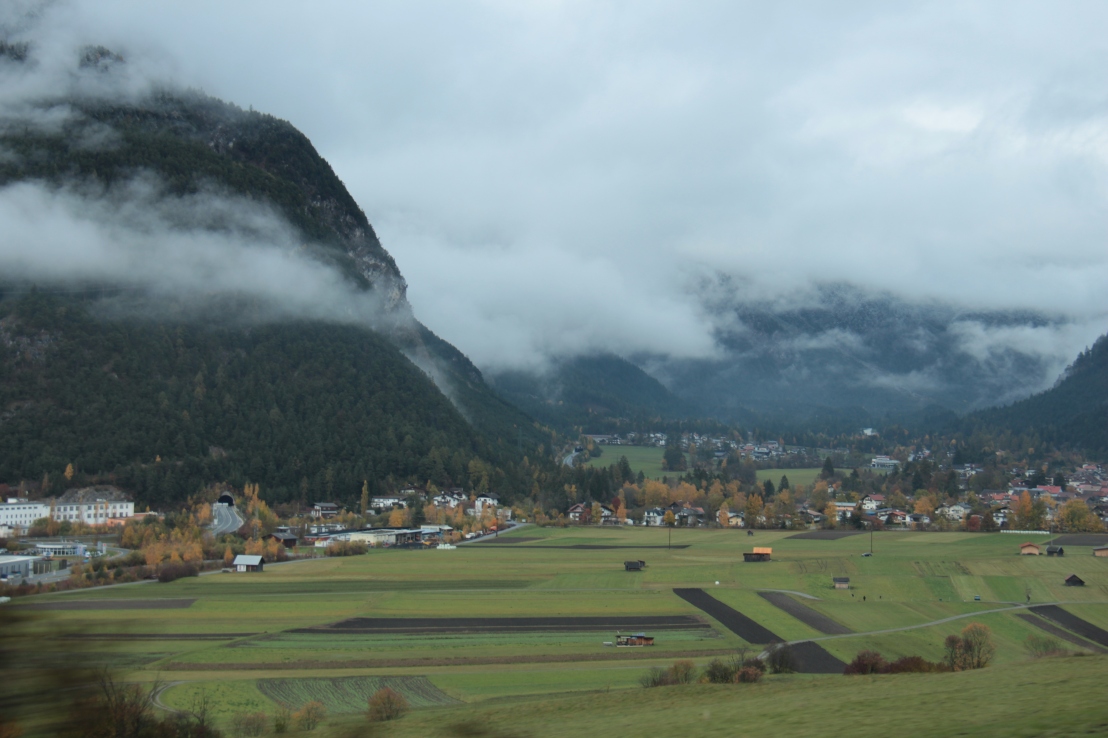 Every once in awhile we’d enter a nice little valley, and it was all very beautiful, although visibility at times was a bit limited and the rain didn’t really let up.

We cleared the Fernpass, then started down the other side. 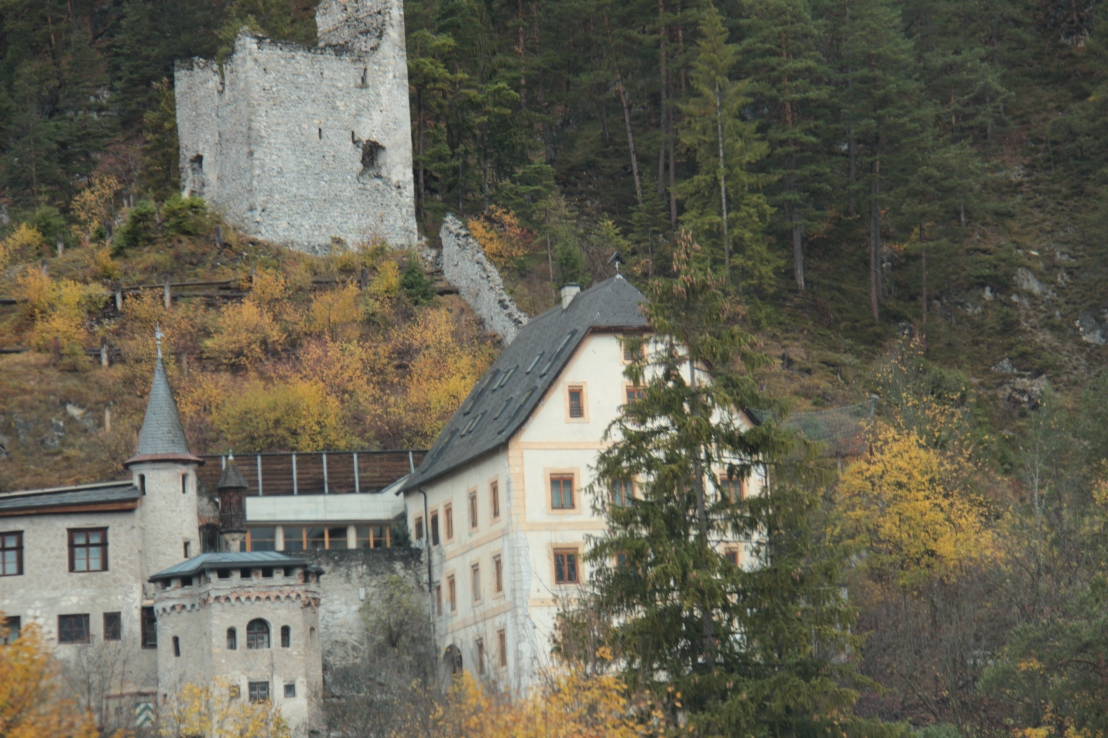 About half an hour later we spotted a castle/fort on a hilltop across the river and there was a suspension bridge over to it way high up.

I realized we’d driven past it before on the way to Austria five weeks ago – I looked back at my photos and sure enough there it was. I wondered if we’d see the large monkey with the red glasses again too.

After we’d been driving for a couple of hours I had to ask Colin to pull over so I could get out and try to work a stabbing pain out of my lower right shoulder around the spine.

I did a bit of stretching while taking Mo for a little walkabout. It was beautiful spot but we didn’t stop for long. The stabbing abated enough for me to get back in the car and continue on.

We passed from Austria into Germany and ended up on a dual carriageway road going north, so we’re no longer on the same road we originally came over on – no big monkey this time. Turning west just before Stuttgart we crossed the Rhine back into France.

The rain got worse from time to time, then lessened. Miss GPS warned us of more roadwork ahead so we left the main road and took less busy roads to our destination of Metz.

When passing through the town of Saverne we noticed a large group of men in black congregating on the steps into a building, and through the windows of the building it looked like it was completely full of men wearing black. A mile or two up the road we noticed a bunch of police cars in a parking area off the road – many of them were out of their vehicles and had their reflective vests on and some of the cars had their lights flashing. We speculated if the two groups had something to do with each other, and what it might be – going for a night hunt? French mafia bust? Local drug house take-down? We’ll never know.

We arrived in Metz and checked in to the hotel, then almost immediately went out to get something to eat. After dinner and back at the hotel I read for a very short while then had an early night.