Bye-bye Italy (sob sob) for now. Got away from the Poggio right around 9:00, heading west along the riviera – as soon as we crossed the ‘border’ into France we noticed that the roads were better and that gas was more expensive.

We passed three separate convoys of official vehicles – the first two were 9 or 10 police vans with lights flashing and the last one looked more like ambulances or something. There had been a large police presence at each of the toll-booths we’d gone through, and at one of them the traffic was backed up in the other direction for about 1 km. We wondered if there was an incident of some sort happening, or perhaps a protest by the gilet jaunes (yellow vests).

We pulled into a rest stop at one point – I noticed a young boy taking photos of a yellow car – it was very space-age looking, likely a kit-car. The sink in the washroom of the rest stop was a puzzle – it took me several minutes to figure out how to get the water to flow to rinse the soap off my hands. The faucet comes out and turns into a trident, with two of the ends blowing hot air for drying, and somewhere in the middle the water comes out for washing, but finding the exact spot to get water instead of air was a challenge.

Not long after we’d left the rest stop the yellow car blew past us. We drove quite far west before turning north – passed some interesting countryside.

At one place I noticed something yellow painted on a rock on the hillside above us – after I took the photo we could tell it was a Tour de France yellow jersey.

We went as far as the campsite in the town of Bedoin, which is where we stayed two years ago when we were here in July for the memorial service for the 50th anniversary of the death of cyclist Tom Simpson on nearby Mont Ventoux. 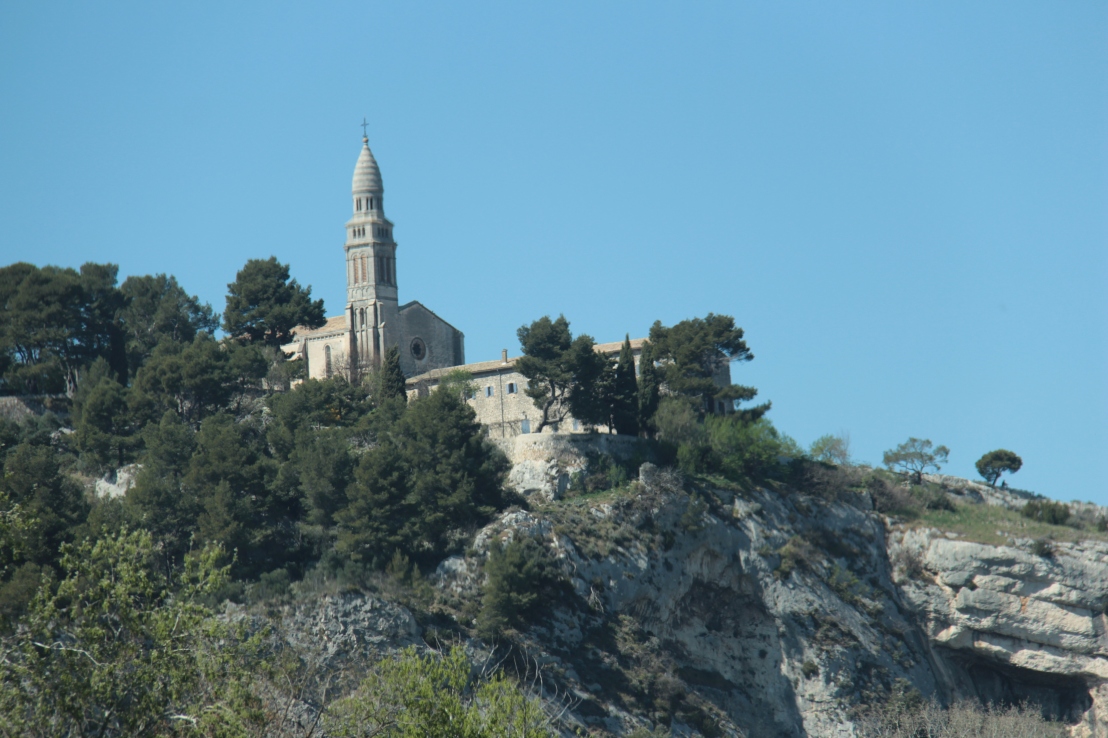 The next day was another long drive – still heading north. We passed two lots of gilet jaunes protesters along the motorway, although they were pretty quiet at the time and weren’t stopping traffic or anything. 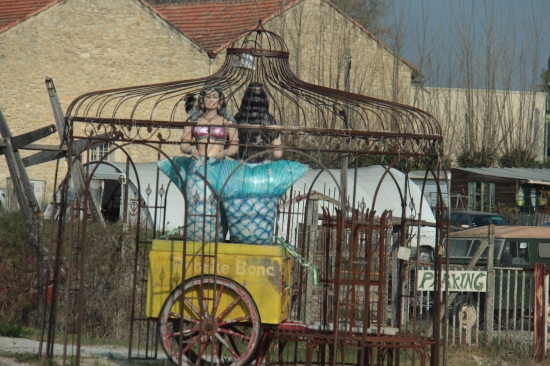 We passed through part of Lyon, where the Saone river meets the Rhone – the Saone was very muddy looking while the Rhone was a brilliant aqua-blue, and at the point where they met they didn’t seem to merge much at all – two very distinct colours. We saw more than one large river cruiser – they’re quite popular on the Rhone.

We left the motorway just after passing Dijon and went to a campground that was supposed to be open but wasn’t, so looked up another one that wasn’t far away. It was a nice little place not far off our route, and had a couple of British campervans as well as some from Belgium.

2 thoughts on “Heading North for the One-Day Classics”