After another night at the campground in Zwalm we left for West Flanders to find a spot for tomorrow’s race. We got to the right general area and stopped at a bar in Ploesgstreet to get our bearings – and oh, maybe a glass of red wine for me.

We asked the bartender how to get to Hill 63 and followed his directions – bad decision. There was a sportif on, and the very small side road we’d been told to follow was part of the route – the riders were not happy we were on the road and we ended up stopping and turning around after only 50 metres or so. 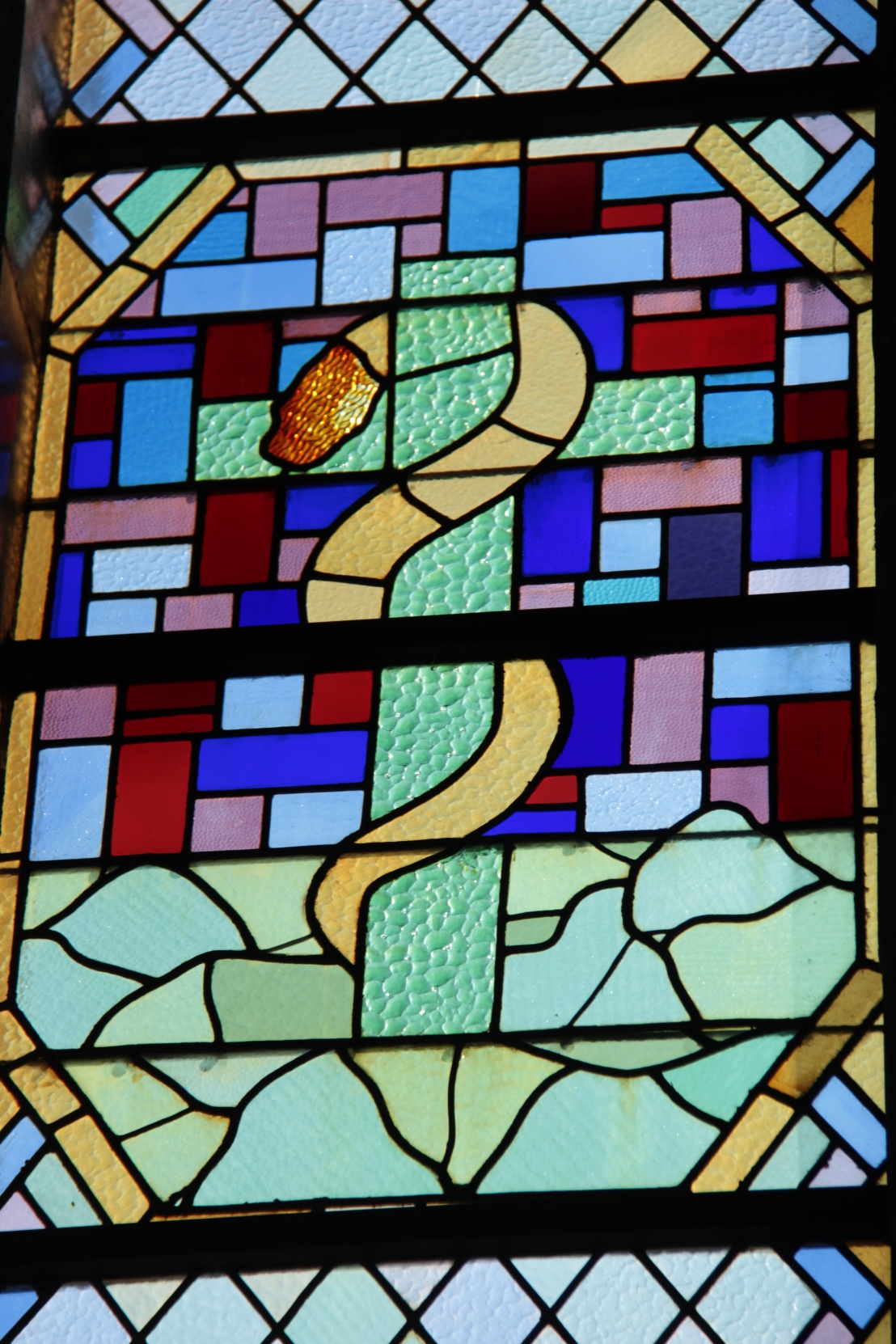 Once we were back on slightly wider roads we went a bit further up to the town of Messines where we stopped and parked so we could have a bite to eat. There were several other campervans already parked near a church, but as soon as we pulled in a lady came out of the one on the left and told us we were too close – she couldn’t get her bike out. So Colin pulled out and over a bit, only to be told we’d nudged the other neighbour’s bike that was on the sidewalk behind us (where it shouldn’t have been) although we hadn’t actually knocked it over. We decided we didn’t want to stay there any longer than needed, although I did take a walk through the church.

It was open, and fairly large, cold and empty of people and had some quite nice stained glass windows, all of which were totally rebuilt after WW1. There were photos on a plaque outside showing the destroyed building after the war, and was very typical of this whole area – complete destruction followed by fabulous rebuilding. 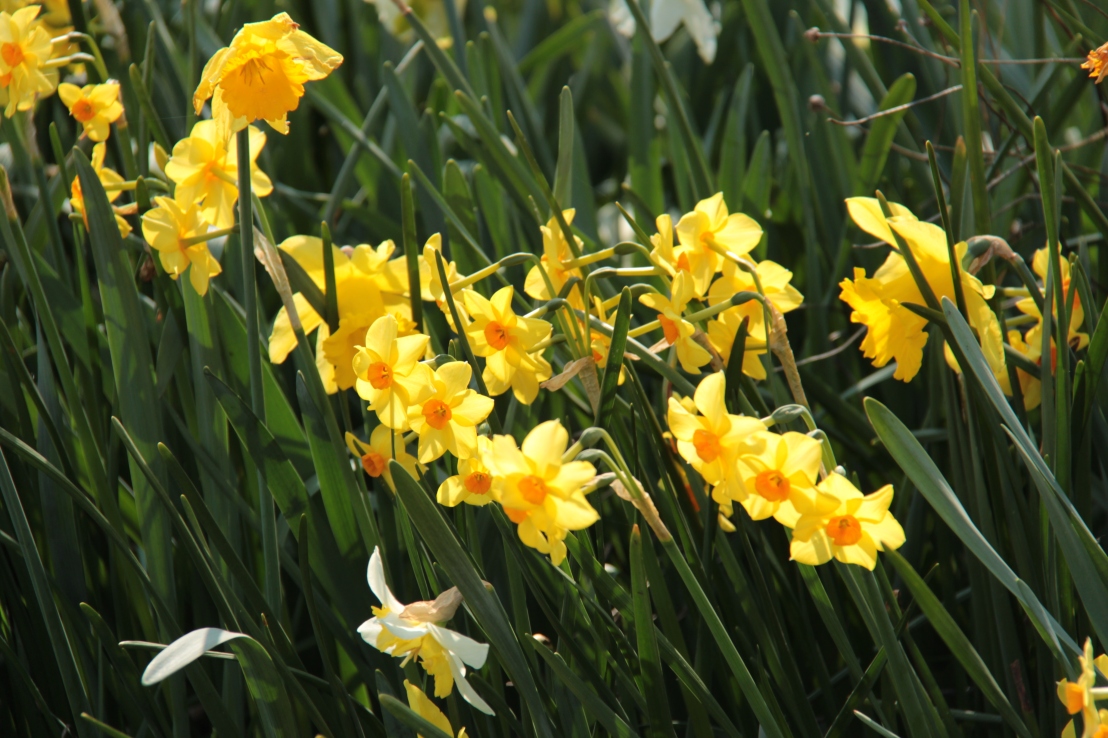 We continued on towards Hill 63, but were again hampered by the sportif riders. We finally just parked it near a ‘feeding station’ for the sportif and I got out and walked. I passed through the feeding area and continued on to a war memorial that was right on the main road.

OK – I like to think I’m rather cold and not very emotional most of the time, but – don’t tell anyone – I’m really a bit of a marshmallow inside. I walked down the ramp under the glass pyramid and into the interpretive centre and couldn’t get more than three words out to the guy at reception before I started crying. I immediately ran to the washroom and sobbed my eyes out – great heaving, gulping sobs. It was several minutes before I could pull myself together and dry my tears, blowing my nose and fixing my lipstick (of course!) and returning to the reception area.

The fellow was very nice and gave me a couple of brochures – there are many important sites within walking distance, including the ‘christmas truce’ field and the catacombs.

The memorial itself was really nice – as seems usual here in Belgium it was immaculately kept – grass neatly trimmed and edged, flower beds without weeds – everything obviously well tended. I remembered that when I visited this general area in 1985 – Hill 62, Sanctuary Wood, Ypres, etc – I got the same impression. A lot of care is still being given to the resting places of the allies that helped liberate the people of this area over 100 years ago and they’ve never forgotten. 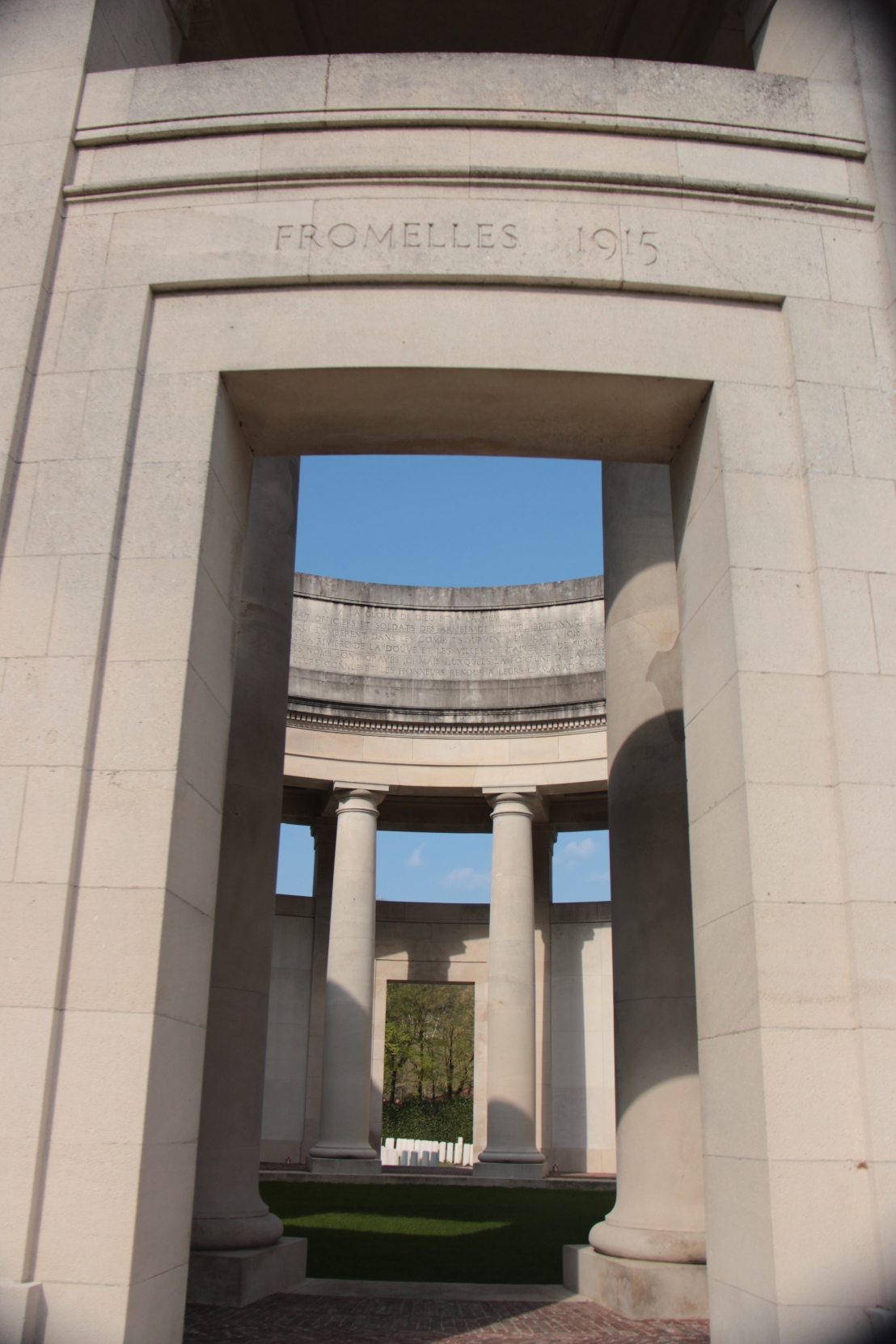 As I slowly walked around the place I thought about the reasons for wars – is there ever a good one? I’ve been to the place that ‘started’ the first world war – the bridge in Sarajevo where the archduke Ferdinand was shot – but so what if he was shot. Is that a reason to start a war that kills millions and millions of innocent people? Why are governments and politicians so powerful – or so utterly incompetent and stupid – that they can order their armies to go and invade a country and kill folks? Is that what ‘civilization’ is??

Then as I walked around I saw a small orange cat sunning itself on the edge of the neatly cut grass and compared it in my mind to the statue of the smiling lion in front of the memorial – both cats, both lounging, both untroubled by the stupidity of men. Not that saving Belgium or anyplace else was stupid, but rather that the conflicts caused by politicians should be solved by politicians, not by armies and bombs. Maybe if the politicians were the ones doing the actual fighting they would find a way to work things out instead – or maybe they’d just claim they have bone spurs or something equally ridiculous and send others out to die in their place. 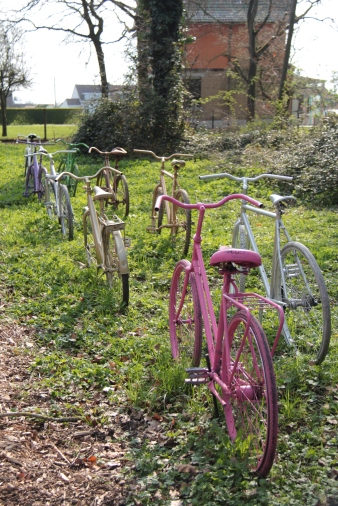 On my return to the campervan I passed thru the feeding area again – one of the tables had a very cute little fluffy white dog on it – her name was Lula and she loved my attention. 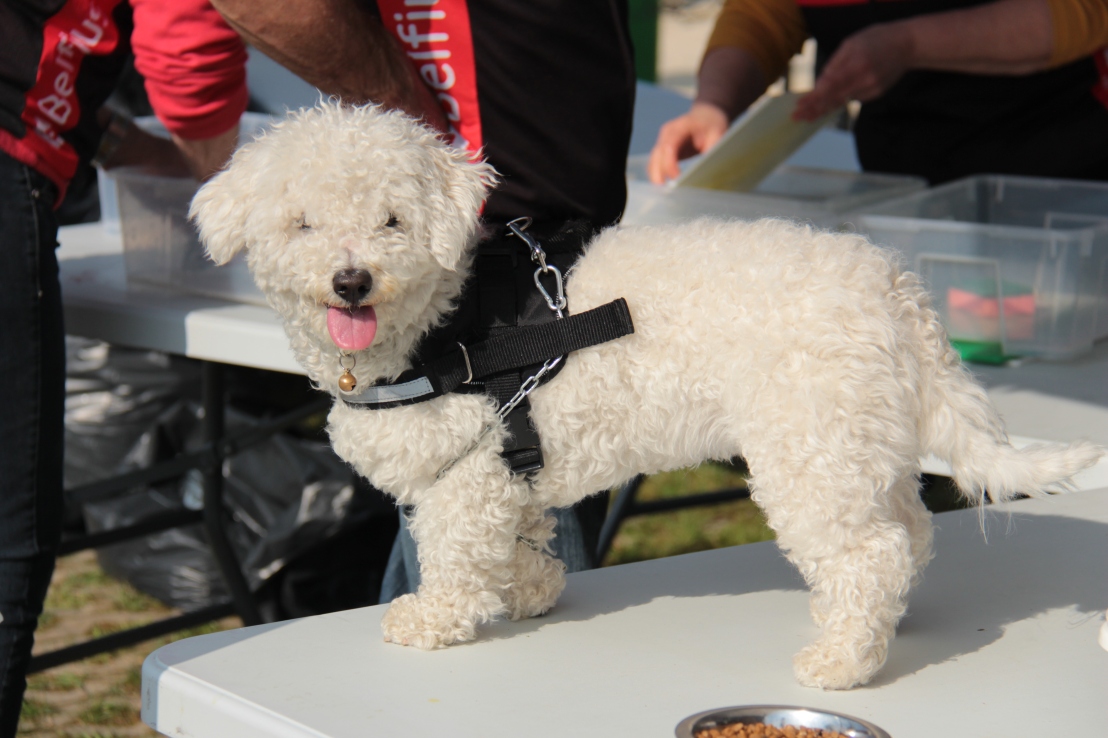 After the sportif had quieted down a bit – the fellow at the memorial had told me there were over 5,000 participants!! – we continued on looking for a place to park it until tomorrow. We drove up the Kemmelberg, which is fairly steep and cobbly, and down the other side – it would be an awesome place to watch from but was already all barricaded off and there was nowhere to park.

We did find a possible place just down the other side, but my bike on the back of the campervan stuck out a little too far so we moved on. We settled on a spot on a small side road – about 100 metres from yet another cemetery. This one was on ‘Underhill Farm’ and was pretty small – only one Canadian but lots of Brits, and even a bunch of Egyptians. 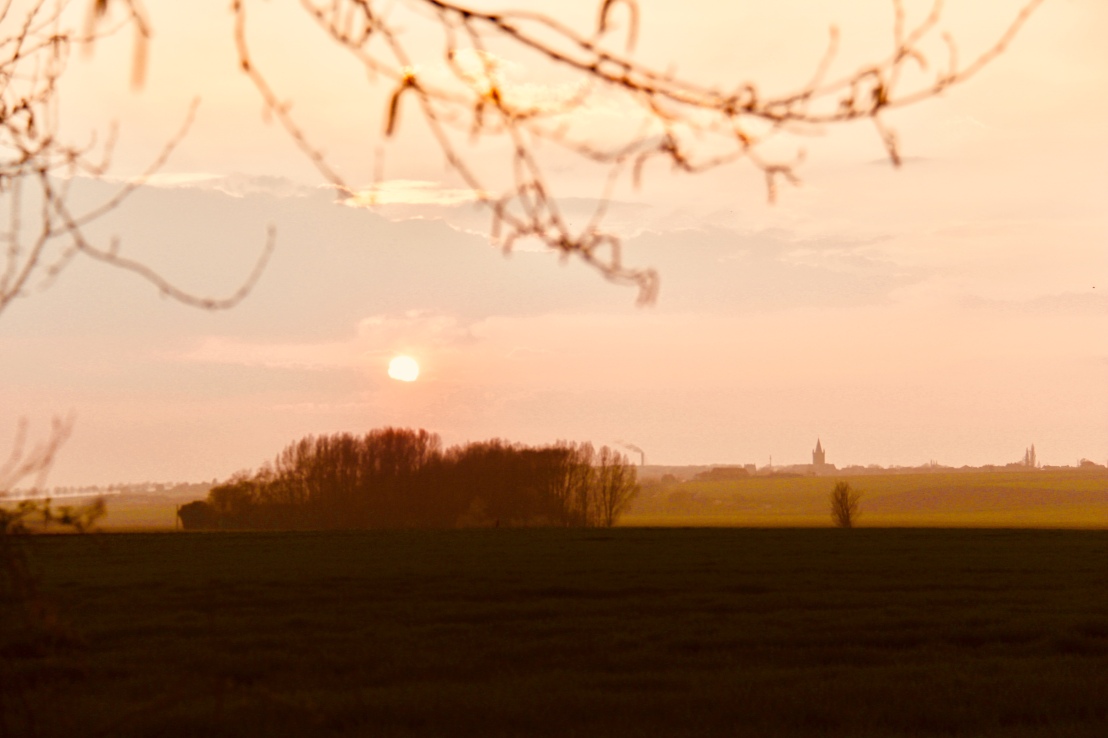