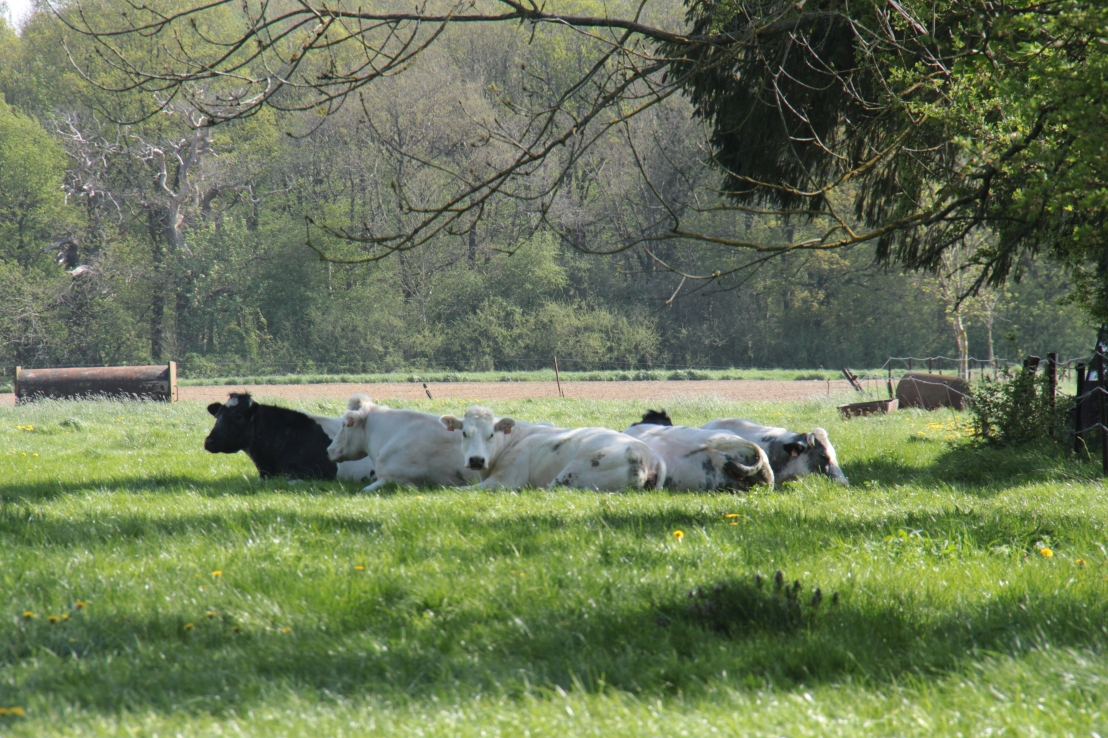 Quite a few more campervans had arrived last night, and more joined throughout the morning. The day was sunny but with very gusty winds.

We put up our flags and went for a nice walk. The cafe across from the park was actually open so we went in for a coffee.

I’ve never been served coffee this way before – we each had our own mini ‘percolator’ on top of our cups and had to wait for it to drip/filter through. It was very good, although quite strong. The cafe itself is more like a sports bar – it has a huge tv at one end and they’re advertising that they’ll have the race on later. 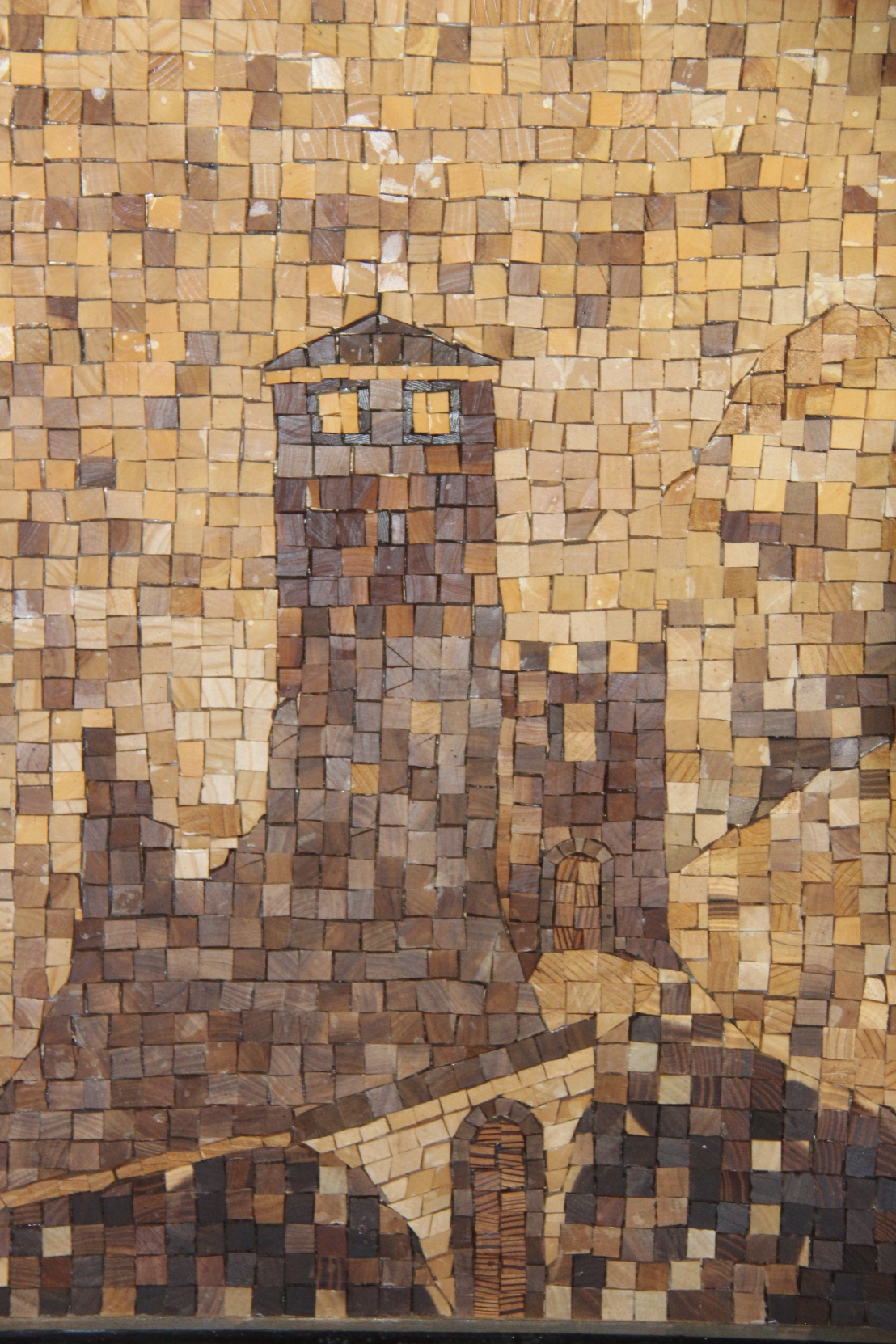 There are some very interesting decorations on the wall – one is a woodblock print of an Italian cathedral, and another is for ‘Waterloo – the Beer of Victory’ which made us howl with laughter. I guess Belgium was not on Napoleon’s side.

Back at the campervan I had just noticed that the Lion of Flanders flag was twisted and caught on something and wasn’t going to blow back out – as we were contemplating whether we should bring it down and untangle it the pole actually snapped from the wind! So we had to take it down and just removed the end section, re-attached the flags and put it back up – problem solved.

We had a bit of lunch before the arrival of the ladies’ race the first time around right at 1:00. We could see the motos and other vehicles well before they crested the hill below us – you can see right across the valley to the road they come down before turning and climbing the small hill into the town.

They made a second pass about 50 minutes later – this time I walked down further so I could see them ride up the hill, but decided not to do that again. The sidewalks are pretty narrow and I wasn’t really getting a better view. The caravan for the men’s race followed about 5 minutes later, throwing the usual stuff out as they whizzed by.

We got quite a few things, including wrist sweat bands in Belgian colours, and a nice light blue microfibre cloth. The little dog got nothing.

The men’s breakaway arrived for the first time at about 2:45, followed shortly by the peloton. 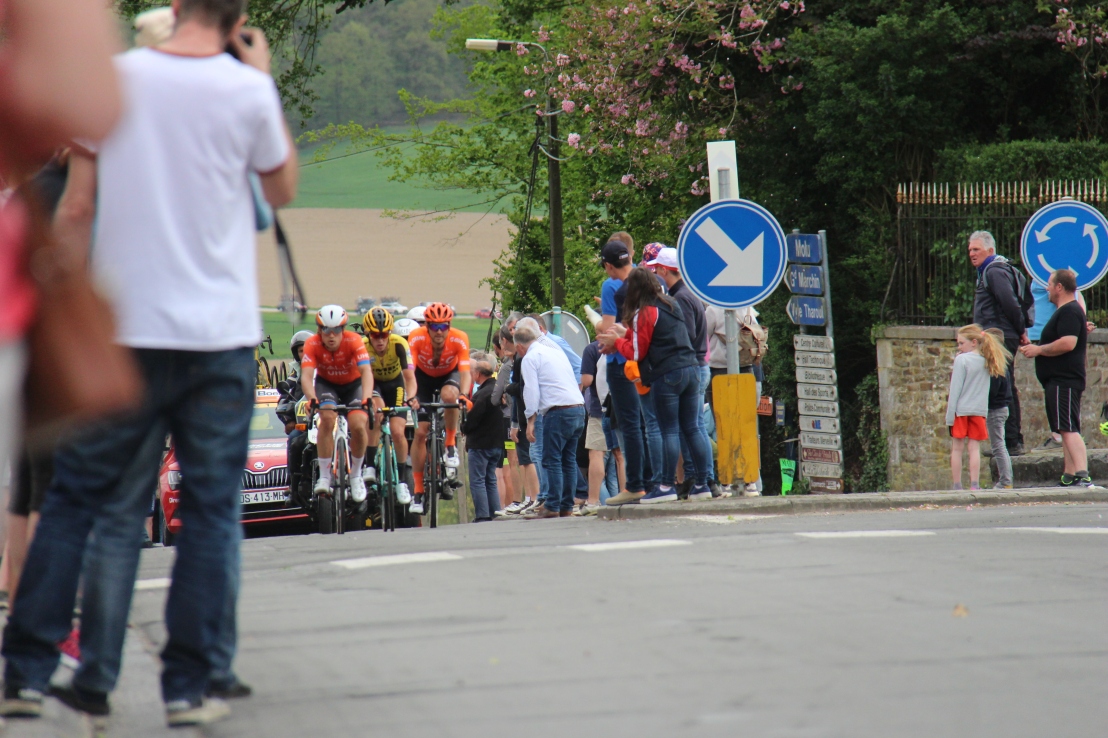 They actually passed us three times, not only two, and each time the caravan zipped by again – more loot. As usual Valverde didn’t look like he’d shaved in a couple of days – personally I like the look.

And as usual Adam Yates was riding with his jersey undone – that look I’m not so keen on.

As soon as the peloton had passed we dashed into the cafe/bar to watch the end of the race on the big screen. The place was absolutely packed – I managed to squish in on the end of a bench and Colin had to kneel on the floor (because some motorcycle riders had taken a chair to put their helmets on).

The finish was excellent – this time Alaphillipe and Fuglsang didn’t dick around so much and Alaphillipe won in a thrilling sprint to the finish. The crowd was very happy and so were we.

After the race ended the bar cleared out and we went back and took down our flags in preparation for leaving our excellent spot. We drove south towards our next destination, passing through a bit of Luxembourg on the way.