We weren’t in any particular hurry to leave the campground – had a really nice hot shower, then breakfast. After discovering that the laundry soap had split and leaked all over one of the drawers and into the next I spent a while cleaning up the snotty-looking mess.

Just before we left we took a walk to the lake – there’s a beach-bar (the Bondi Beach Cafe) right on the lake and it was full of Harley riders. There’s a boat ramp going down into the water, and a nice park. A couple was sitting on the wall at the lake’s edge feeding some swans bread – I refrained from reminding them that bread is terrible for all birds, but that’s what most people feed them.

We left Dormelletto just after noon and made good time to Ghisallo, above lake Como – we’d been there last October for the Tour of Lombardy and had really liked it. The drive was only about 90 minutes, and we pulled into the parking area near the church and cycling museum just before the rain hit.

Once again Mo didn’t like the thunder, and each time it rolled around us she started barking and howling. It poured for awhile, then slackened off a bit but didn’t stop for hours. 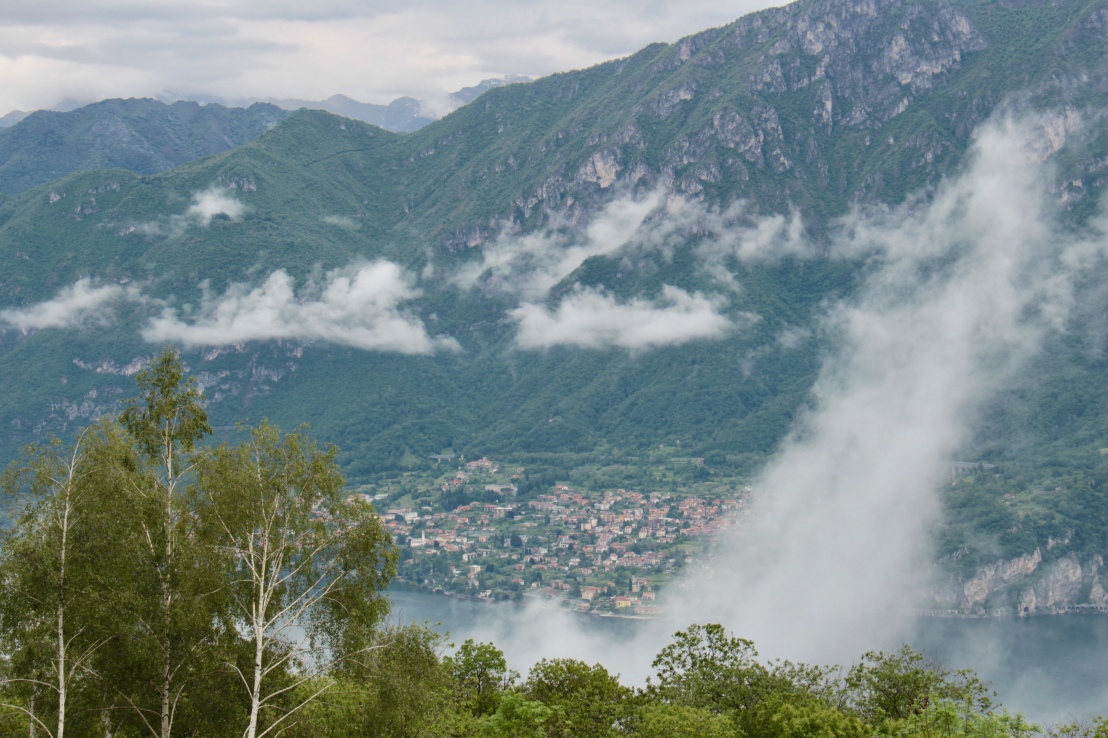 Another campervan joined us and turned out to be from England. We got out and had a chat, then all talked with a young Italian fellow in an official car – they’re going to rope off one of the parking lots for all of the official vehicles tomorrow, and he was trying to find out for us which one so we’d know where it would be ok to park without getting kicked out.

We ended up moving across the road and into the restaurant’s large parking area – there were already three campervans there so we pulled to the far end and got setup.

We had planned on going to the restaurant for dinner – it was owned by the same nice lady, Florianna, that ran the B&B we stayed at in October, and we’d enjoyed the food then. But when we walked over it was all shut up – an old man came and told us it was closed – out of business. We think he might have been the fellow that was raking the leaves and tending the garden last fall.

We then walked about a mile, following a sign that said pizzeria/restaurant and eventually found it – the reception area was totally packed, and we could see a large eating area off to the side. However we were told that it was fully booked and all we could get was take-out – when we remarked on this another guy that was waiting confirmed it. He and his friends – all part of the giro – had phoned ahead and been told the same thing.

We ordered a pizza to go and hoofed it home in the rain to eat – it actually was pretty good, and I have left-overs for breakfast. We were just finished eating when I heard a noise and looked out the side window to see someone gesturing at us. Colin opened his door and it was the old fellow from before – telling us that it would be 5 euros to park for the night. We figured it was cheap enough for where we were, so didn’t quible.