The morning of the ITT was beautiful – the almost-full moon was still up and mist was rising on the hilltops as the sun rose. Some of our fellow campers had partied until very late – I doubt they enjoyed the morning as much as I did.

I was amazed by how many more campervans and tents there were since last evening – I’m happy for the farmer.

There’s a giant chicken near the gate to the field, and they’ve set up a small stage, a couple of food trucks and a display of vintage cars.

Hundreds of people have walked up and down the road in front of us – we’re partway up the largest hill on the course.

We did pretty well when the caravan came through – it was much earlier than expected and we had to run for it as we were exploring at the time. There’s a women’s race on – not a time trial, however, and they had passed us once when the caravan came again. It was actually the second half of the caravan, and the women did five circuits in all.

Right after the women passed for the last time several of the men came on their recon rides for the ITT. 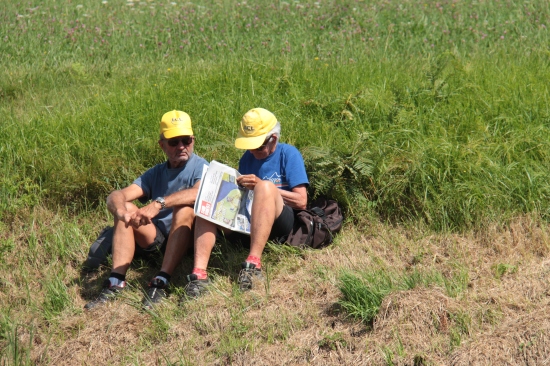 The first racer arrived around 2:30 and the last passed us at 5:47 – a long, but entertaining day overall. 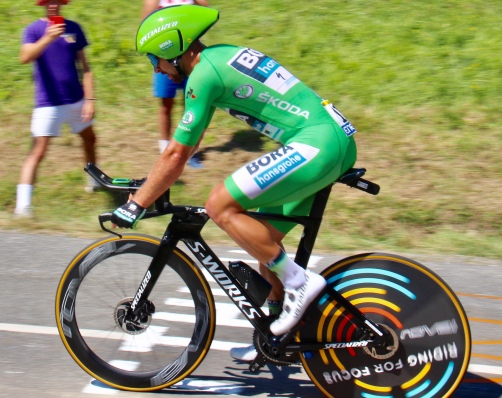 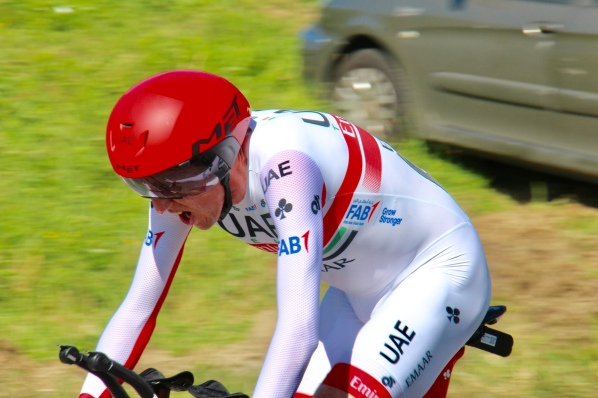 And Ricardo – our friend from Spain – showed up with some friends! They’d been a little further up on the course and had made their way down to us – they found us by our flags. We had a short little hello – I gave them all water, then they were on their way again.

As soon as Alaphillipe passed we started to take down the flags and prepared to leave. We headed directly to our next stop at the bottom of the Col du Soulior in the Pyranees.

We passed a line of campervans on the left side of the road and rounded a tight s-curve over the river – right on the other side was a space just big enough for one campervan, right next to a field of lamas – or maybe alpacas – not sure which, and they weren’t talking.