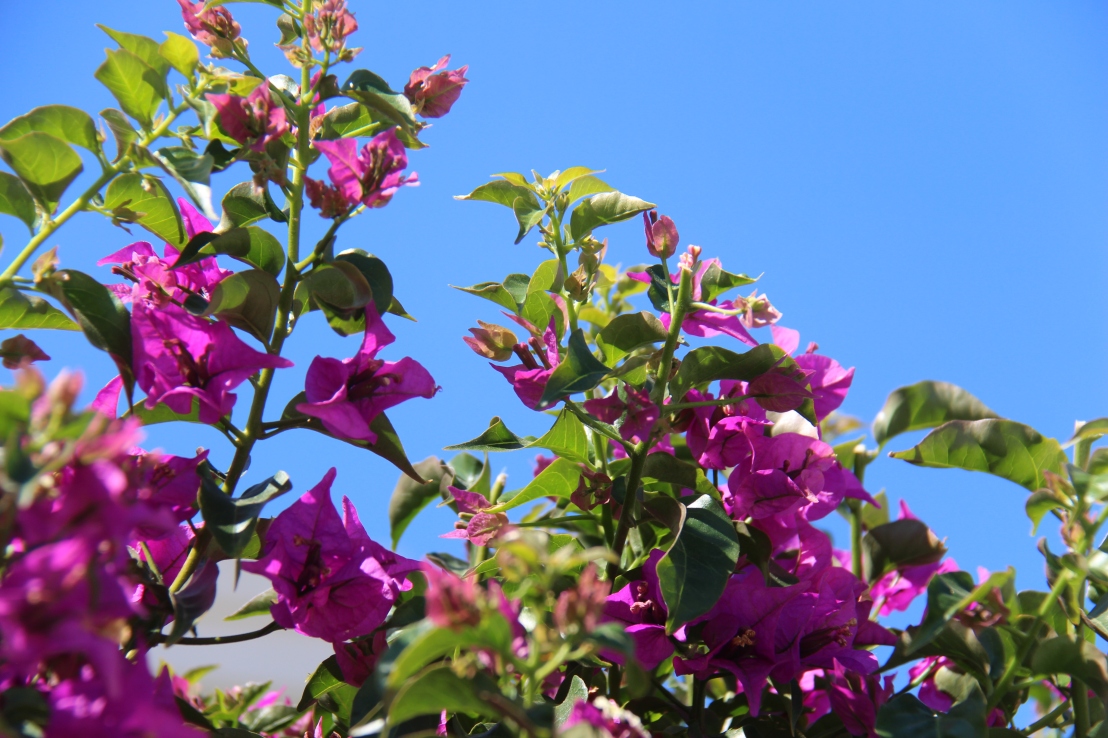 Having left our lovely campground near San Marco we once again headed south, passing Catania and then Siracusa before rounding the corner and going west along the southern coast of the island.

We’d picked a place on the coast to head for, and ended up at campground Luminoso in the village of Punta Braccetto, right on the Sea. 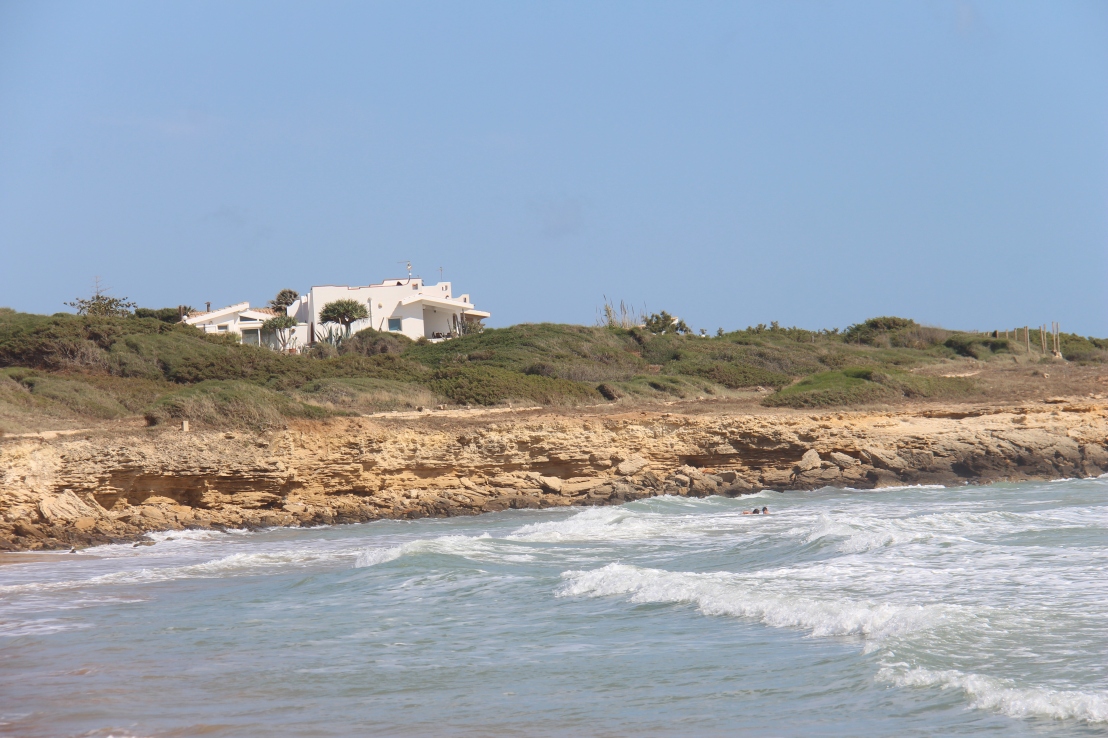 It’s a very quiet place as the road we’re on is a dead end so there’s only a bit of local traffic and mostly all you can hear is the sound of the waves on the beach.

Our camping pitch is quite large, and under a canopy that covers four similar pitches.  We have a private bathroom and the showers are small but nice.  And the Wi-fi is very good, so we’re pretty happy.

We’ve had several nice walks along the beach, which happens to be one of the many that the Allies landed on in 1943 to begin the ‘liberation’ of Italy. 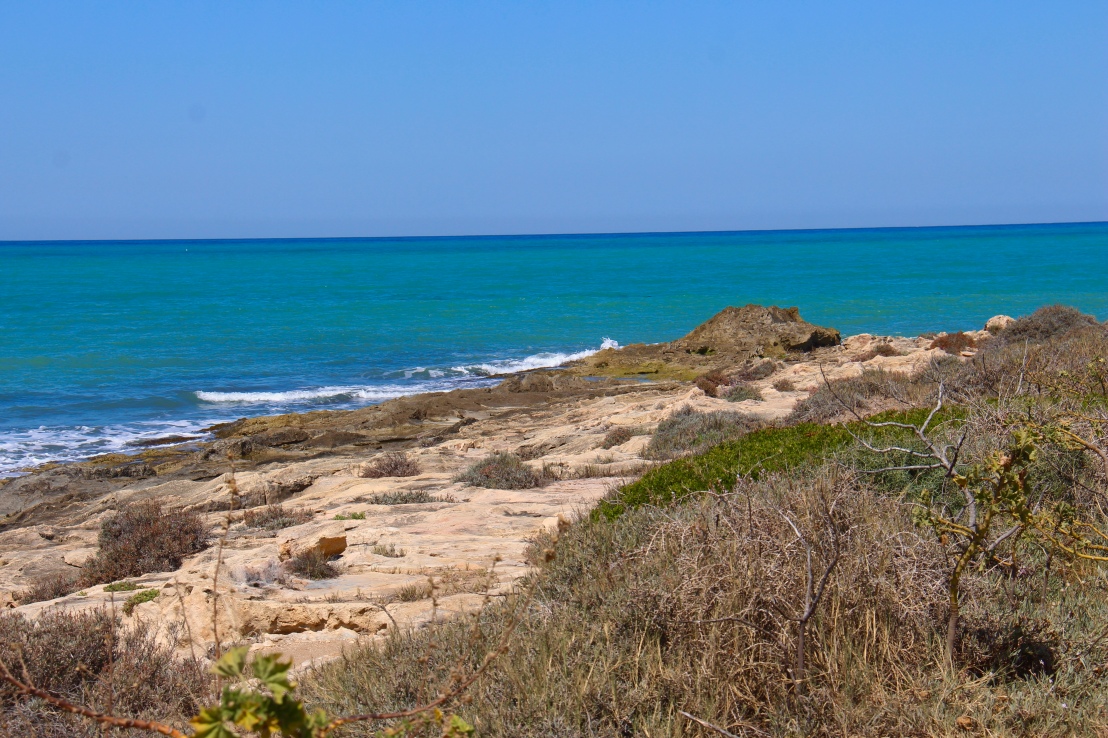 We had excellent pizza from one of the local places for dinner one evening, and were looking forward to a nice seafood or pasta lunch the next day.  We drove further west along the coast as far as the city of Gela – which has a large industrial area right along the road – but got frustrated with the small streets and impatient traffic.  The city is right on the water but you have to negotiate thru a maze and over a hill to get to the waterfront – we gave up and headed back east to Vittoria, where we were once more disappointed.  There are lots of restaurants, but many either aren’t open, or only have takeout.

Two things they have in great abundance in this area are greenhouses and garbage.  You can drive for miles and miles and there’s nothing to see in any direction but greenhouses.  Many of them are being used – tomatoes, eggplant, peppers, etc., but many are derelict with tattered plastic flapping in the wind and rows of weeds flourishing inside. 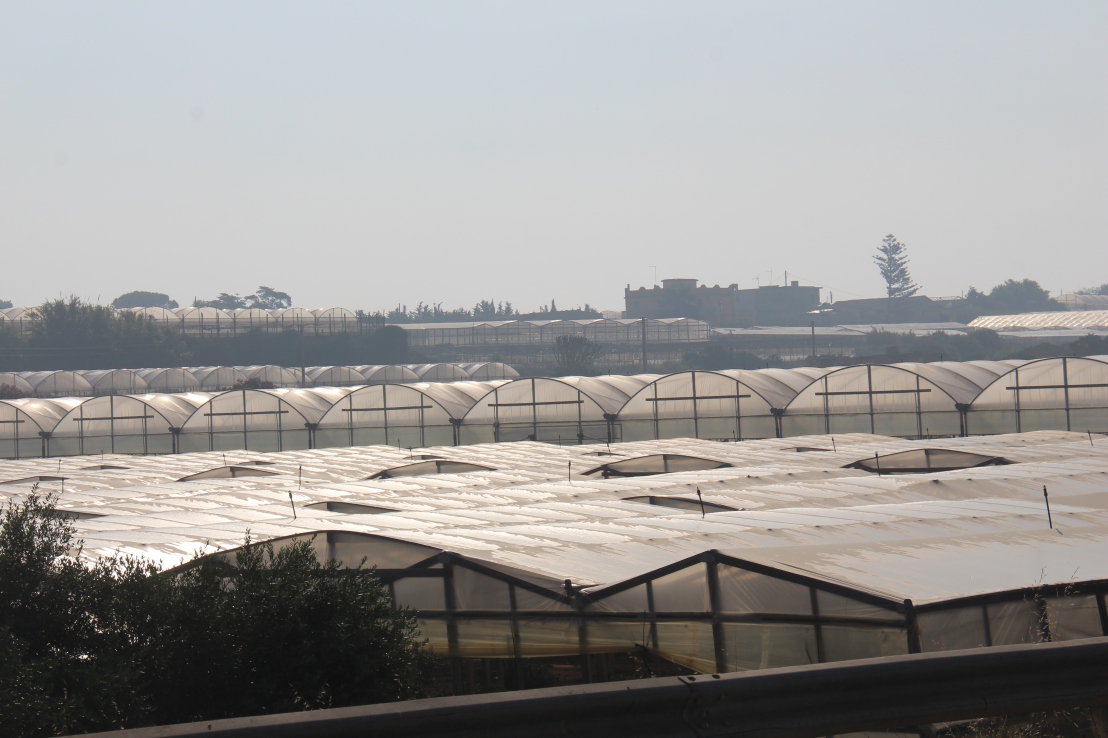 And the garbage – it really spoils the feeling of the place.  And it’s not just in the pullouts where there usually is a bin – it’s everywhere on both sides of the road.  Not just the odd plastic bottle or candy wrapper – it’s bags and bags – I even saw a mattress that was just tossed and left.

It’s very unfortunate – I read that Sicily is desperate for tourists but I must say that the garbage is not a tourist attractor. 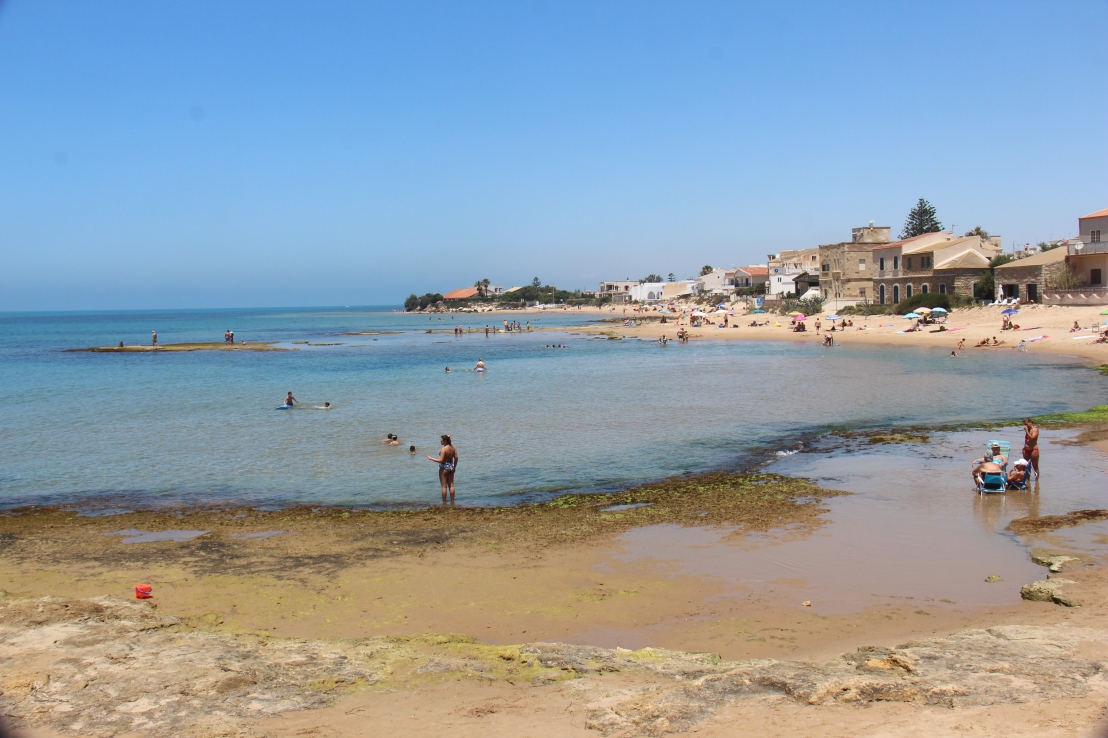 This morning I finally got on my bike – a nice leisurely ride a short way back to the town of Punta Secca which is also right on the coast.  It’s a lovely place with a pedestrian promenade all along the water, and miles of fine sand beach, as well as a very tall lighthouse.

It’s another of the many places the allies landed on July 10, 1943, and there’s a nice memorial to them.  I was so impressed with the village that Colin and I went back a few hours later for lunch. 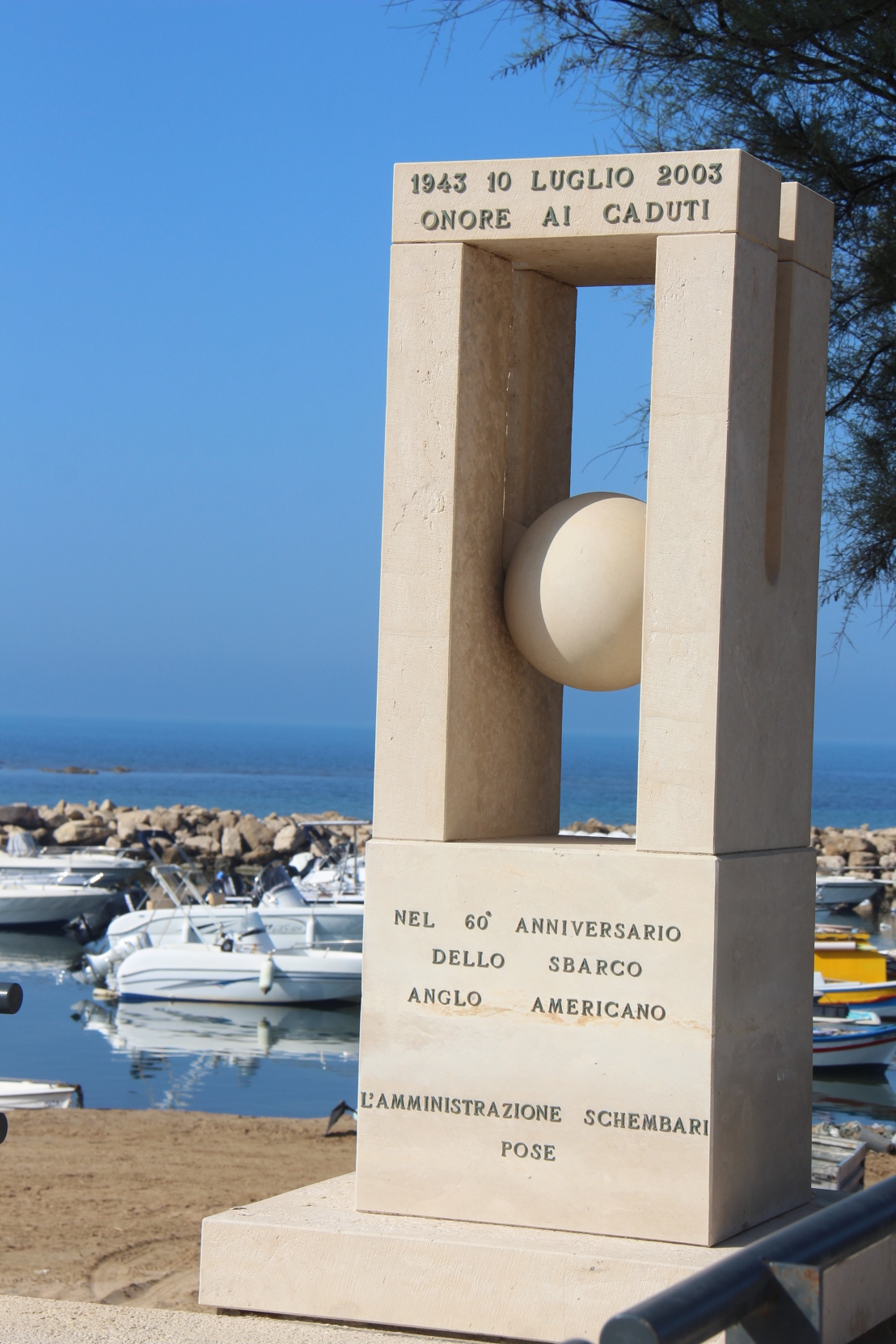 The restaurant we chose, after walking along the entire promenade, was the first one we’d seen.  And was it ever good – not cheap – but good!  We both got the calamari, which was stuffed with risotto then sliced and served on a bed of pureed potatoes.  The presentation was beautiful and the meal was delicious.  We had one glass each of a local Sicilian red wine and Colin got the dessert of hot chocolate cake served with cold ricotta.  I had a couple of bites and it was also delicious, although far too sweet for me to indulge in more. 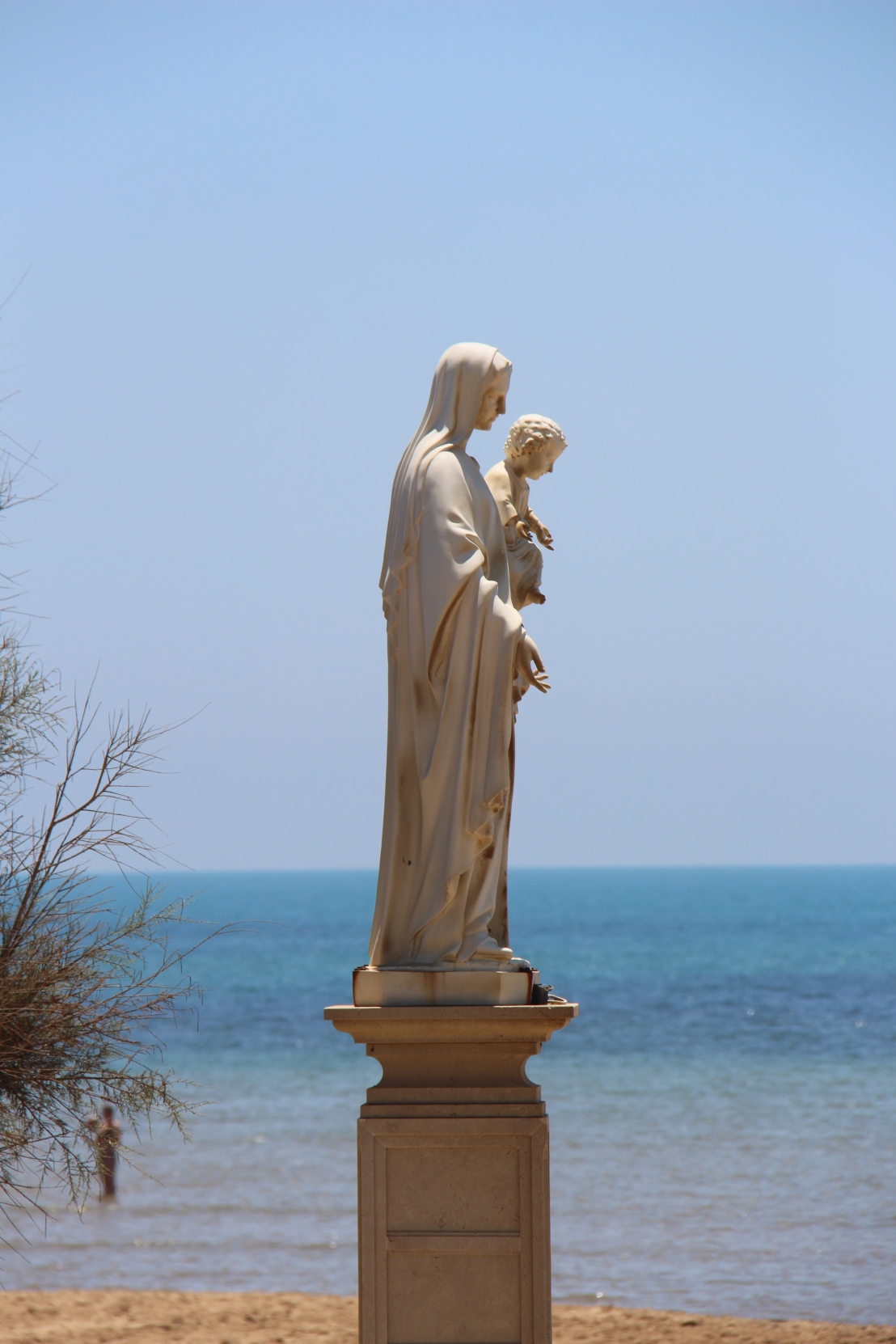 We were content to sit there for a bit but left prematurely as a thin, very white lady in a tiny thong bikini with a large black dog arrived and the dog was very barky towards Mo.  I got up immediately and took Mo for a stroll while Colin finished his espresso.

It was just the kind of place we’d searched for yesterday to no avail – but well worth the extra day’s wait.  Sand Design Restaurant in Punta Secca – I told him I’d mention it – he described the daily specials in great detail and with pride, and as I said, it was excellent.  We don’t actually eat out that often, but when we do we really appreciate it if it’s something special.

One thought on “Punta Braccetto and Punta Secca”