I had an unfortunate incident involving Henry on Thursday evening – I went to grab his lead to take him for a walk, and I’m not sure if I surprised him on his blind side or what, but he went for me.  My left hand was clamped down on but promptly released.  The next morning I was able to pack up my tent, but the hand was in pain – as the day progressed it got more and more swollen.  If I let the hand down it starts to throb so I’m now holding it up almost all the time – I feel like a goof doing the ‘royal wave’ or something. 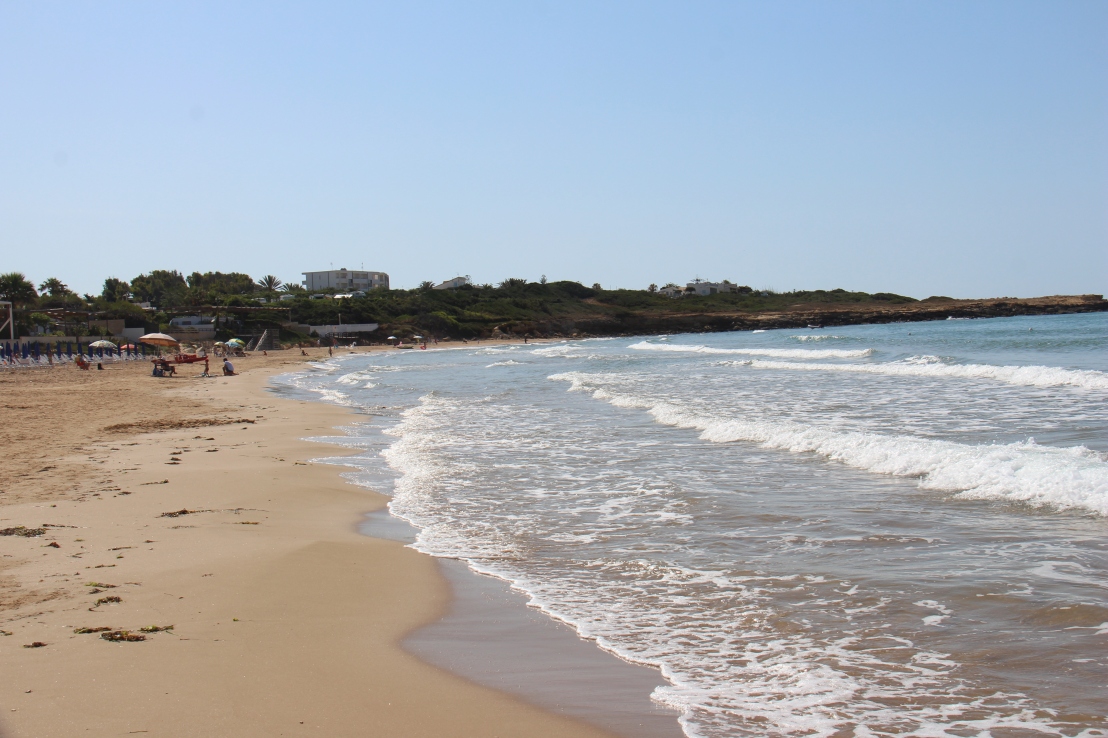 We left the nice campground and headed inland to the town of Piazza Armerina, which is near the Villa Romana del Casale that sounded interesting and we wanted to see.  Well – another tale of gps misguidance.  The campervan gps couldn’t find the Villa by name, and Miss Waze kept losing the gps signal so we resorted to trying to follow the signs.

I don’t know how many times we went back and forth and around the town before we tried inputting the map co-ordinates into the campervan gps.  It’s led us astray before so we were wary of using it, and this time was no exception.  We got on a road that just got more and more narrow and perilous as it wound up the mountain, then ended, although there were great views.

We were just outside the gates of a house, and a car pulled up!  They went thru the gates, then the eldely gentleman came back out to see why a campervan with french plates was parked outside his gates on a dead-end road in the middle of nowhere.

Colin managed to explain what we were looking for and he said ‘oh – it’s right down there’ (in Italian) and pointed way down below us.  Once again – close, but no cigar. 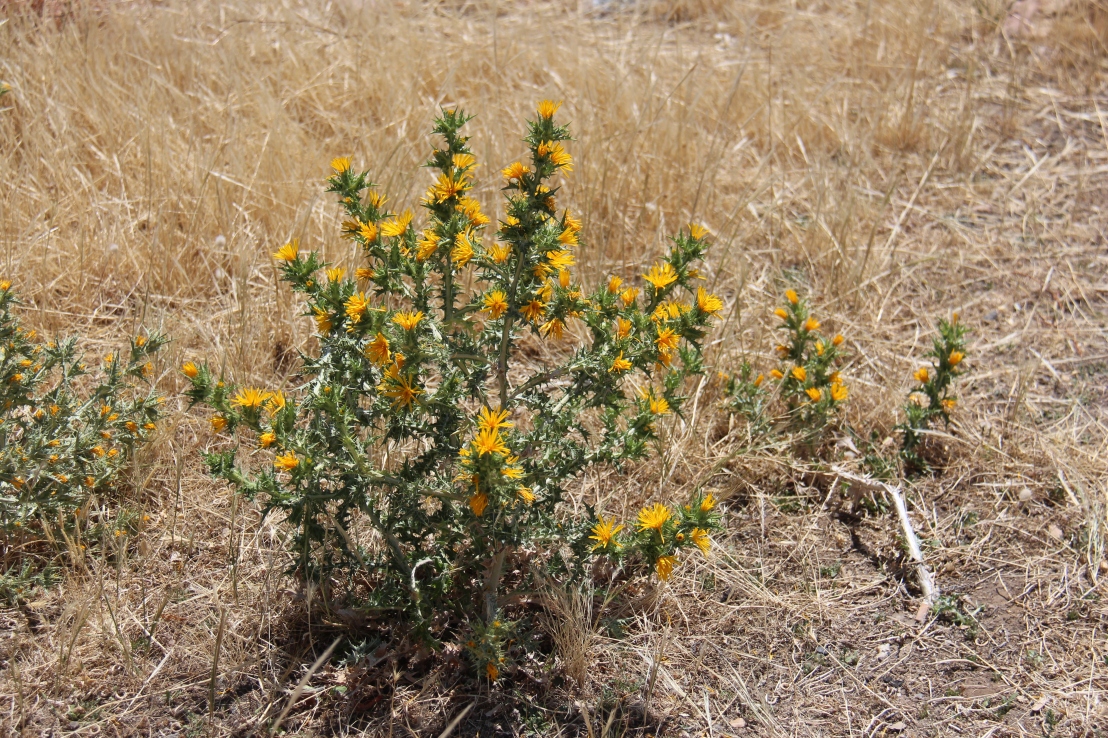 Luckily there was a wide space and we were able to turn around and backtrack to the city where we once again went in circles before spying the well-hidden markers to the villa.  Once finally arriving there we parked in the virtually empty parking lot, and I took Mo for a little walk to investigate entrance fees, etc.

The fee was a bit high, and dogs aren’t allowed so we’d have to leave them in the campervan, although there are several resident stray dogs around.  It was very hot and there was no shade to park in so we opted to move on, planning to return early in the morning.

We drove about another 30 km just past the town of Valguarnera to a campsite Colin had looked up.  It was great – not very large, lovely swimming pool, and views of Etna.  She’s almost always smoking – sometimes one plume as today, sometimes three or four.  The ground wasn’t right for setting up my tent, and I couldn’t have managed anyway with my injured hand.

The next morning we decided not to go back and see the roman villa, but instead took a day-trip to visit a Canadian war cemetery near the town of Agira and we found it with no problem – it was actually marked in our map-book. 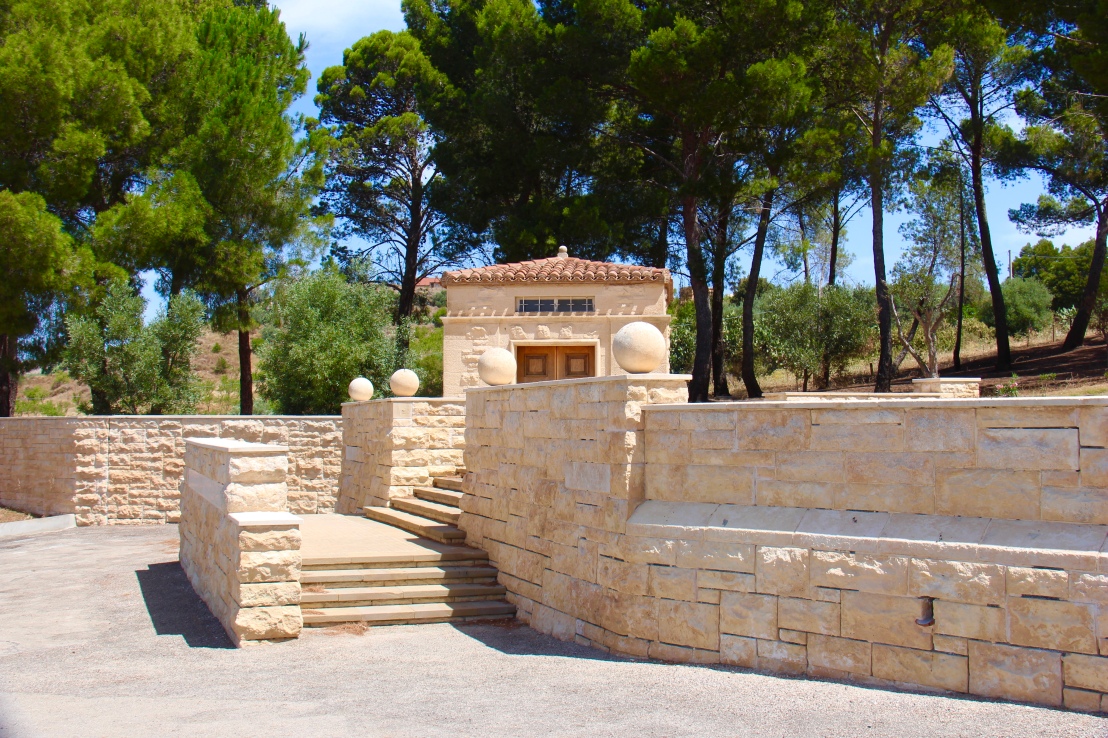 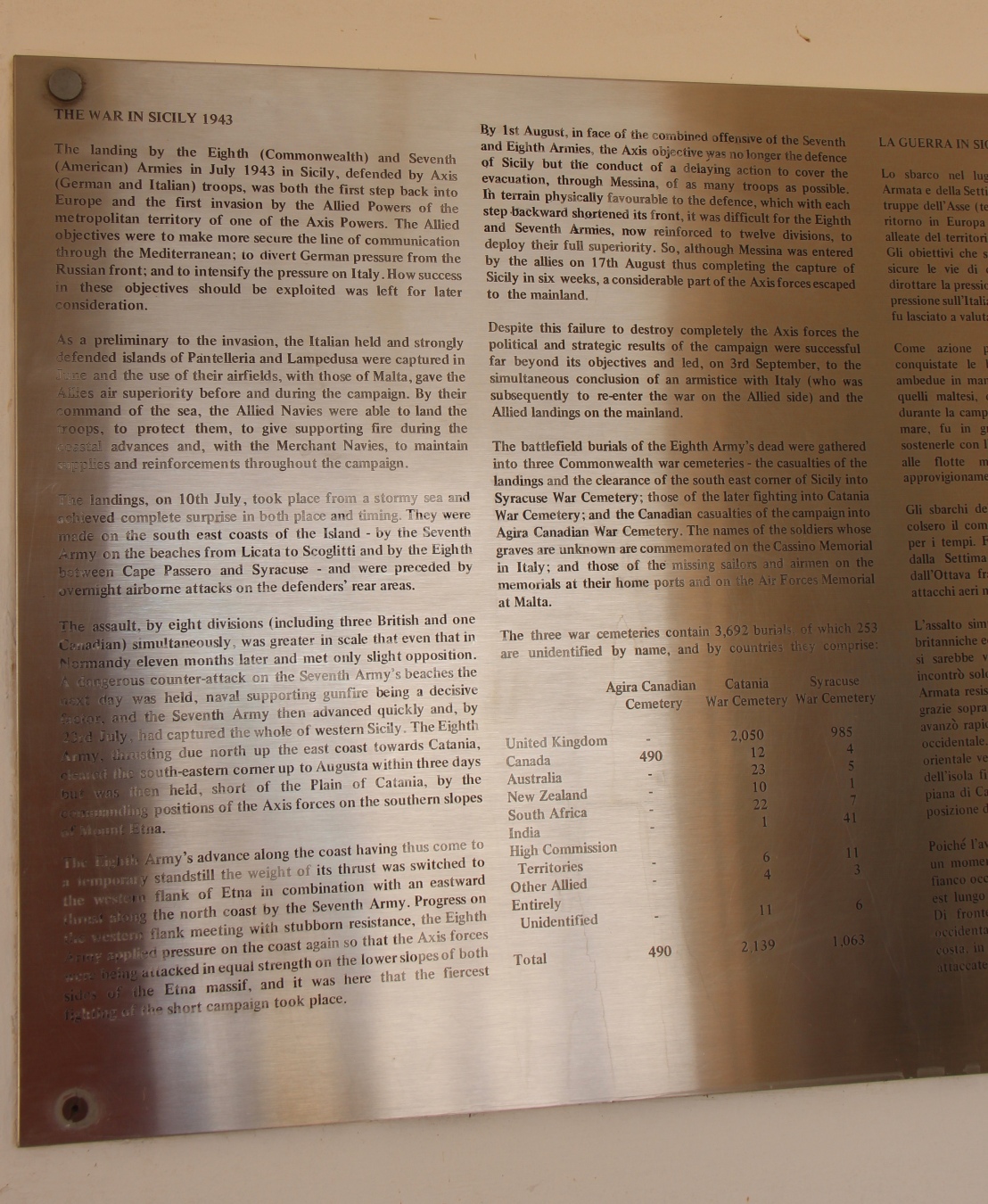 It was really very nice – as you approach it from the west you walk up a hill, and as you crest the hill you’re faced with the blue-green waters of lake Pozzillo with Etna looming in the distance. 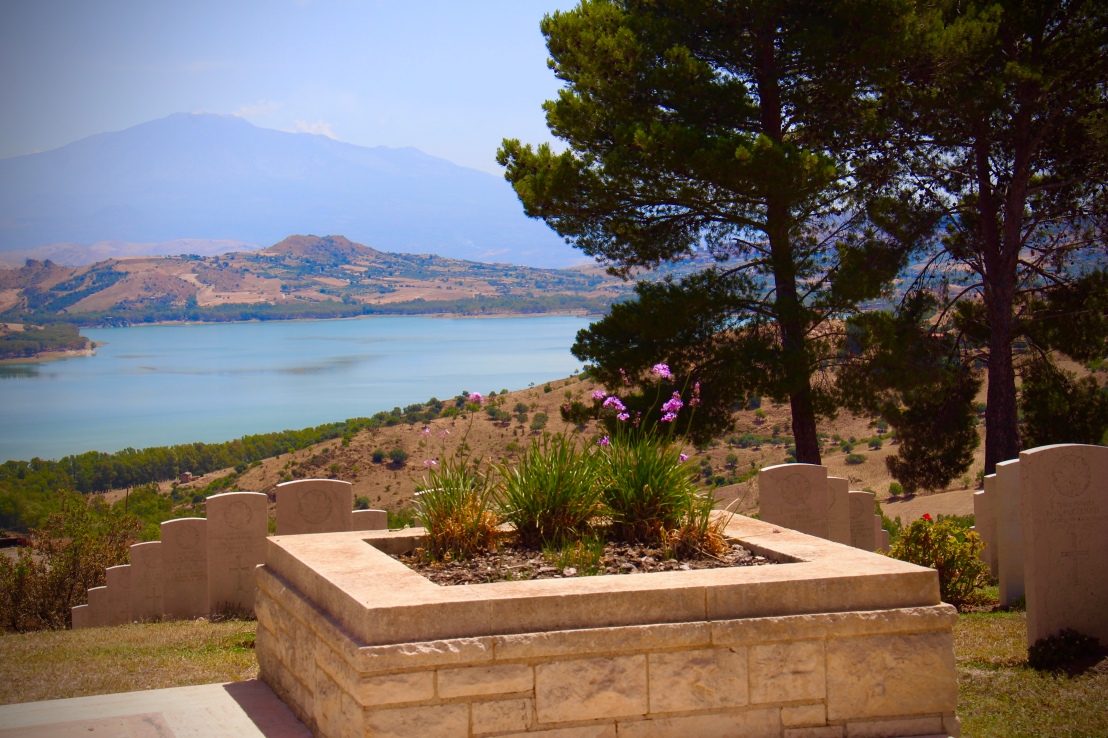 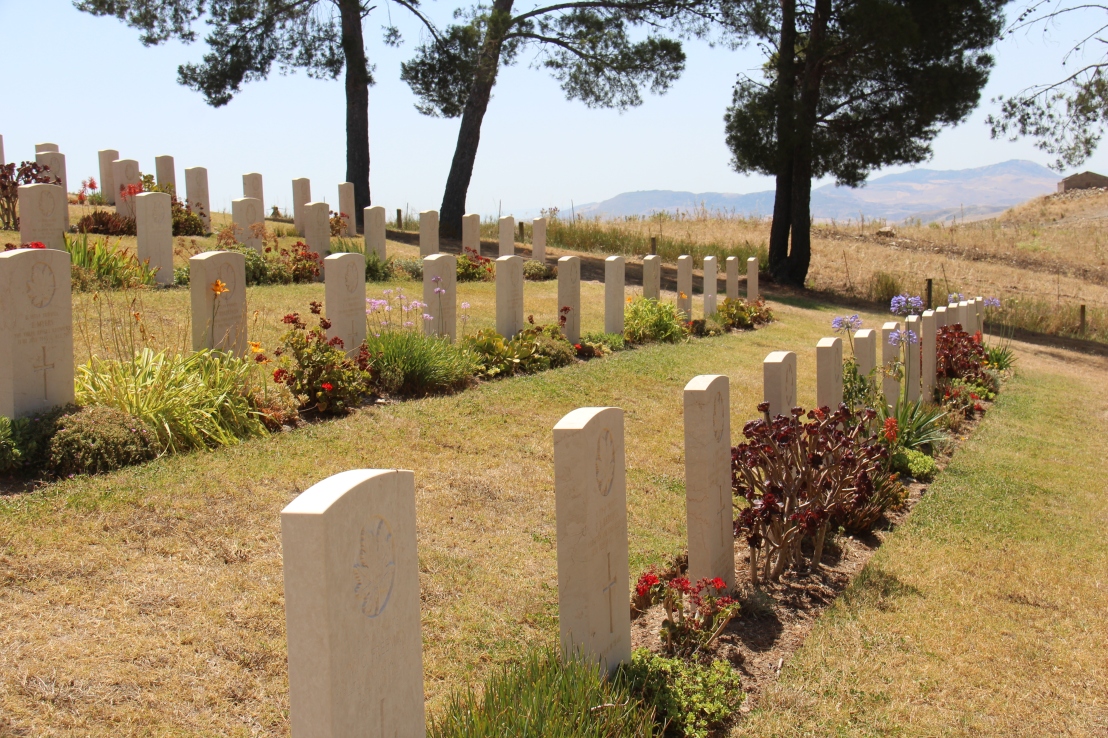 It’s very well maintained, with lovely plants and flowers between each grave marker.  This particular cemetery is only Cdns – 490 in all, with a few more canucks at other cemeteries elsewhere on the island with the brits and yanks.

We drove through a couple of towns trying to find a nice place for lunch but ended up parking on the side of a very small road – the salmon and asparagus I whipped up were delicious.

After lunch we drove to the town of Enna – the highest town on Sicily.  Unable to take the road we wanted due to a closure of some sort we backtracked to the town of Valguarnera, trying to find a bar – success at last – and the wine was even chilled, which is my preference ever since our visit to Spain in 2017.

The campground does a good business with its swimming pool – every morning cars start to pull up and disgorge kids by the dozens.  There must be near 30 there until late afternoon when they all leave for dinner and the pool is deserted once more.

We actually both went for a swim the second evening and it was great – not too warm but very relaxing.

The campground sells ‘sulla honey’ – it’s a special honey that is produced by bees that forage from the french honeysuckle bushes on the slopes of Etna.  In addition they sell a very nice local olive oil – Colin bot some of each.

We left the little campground Sunday morning around 10:00, returning to the south coast a bit further along than we were before.  The journey was again not without its challenges due to various factors – road work, temperamental gps, and confusing road signage.

One of the smaller roads we ended up on was so rough we almost bottomed out a couple of times, and things got bounced around pretty good.  We did make it to Agrigenta by early afternoon and found the campground we’d been looking for.  The fellow at the last place had given us a map of Sicily with several related places marked – this one is called ‘Valley of the Temples’ because of the nearby cluster of Greek Temples that we plan to visit.

Shortly after getting parked Colin discovered that the bike rack was breaking – a few more bumps on the last rough road and my bike would have been dangling, taking Colin’s with it.  Some repair work is going to be needed before we hit the road again.

Being quite hungry we walked to the seashore to find a restaurant – it’s a bit of a hike but there’s a lovely wide promenade lined with flowering bushes all along the shore.  The only kind of unfortunate thing was the dozens and dozens of young black men with table after table of knock-off running shoes, purses – yeah right, I’m sure they’re genuine Gucci – and every other junky thing you can think of.

We found a nice looking restaurant and sat down – the waitress immediately brought water for the doggies, which I took as a good sign.  My meal was excellent – grilled calamari with grilled zucchini and eggplant – if I’d been at home I would have licked the plate, but settled instead for wiping it clean with bread.

The wi-fi signal here isn’t great but I was able to facetime home – miss my boys lots, but at least seeing them once or twice a week via facetime is better than nothing.  And no – they’re not children, in fact one is a cat.