The morning was totally quiet and peaceful – no traffic noise at all, no roosters crowing, dogs barking or kids squealing.  We left the parking lot at a decent time and said goodbye to Scopello – a place we’d come back to, maybe at a cooler time of year.

We took a different route back to the campground near Enna, heading along the north coast thru Palermo, then turning south along the motorway that goes inland and over to Catania.  We made pretty good time, even thru the city, and saw a hilarious sight on the motorway – a small car was driving along with a sofa strapped to its roof. 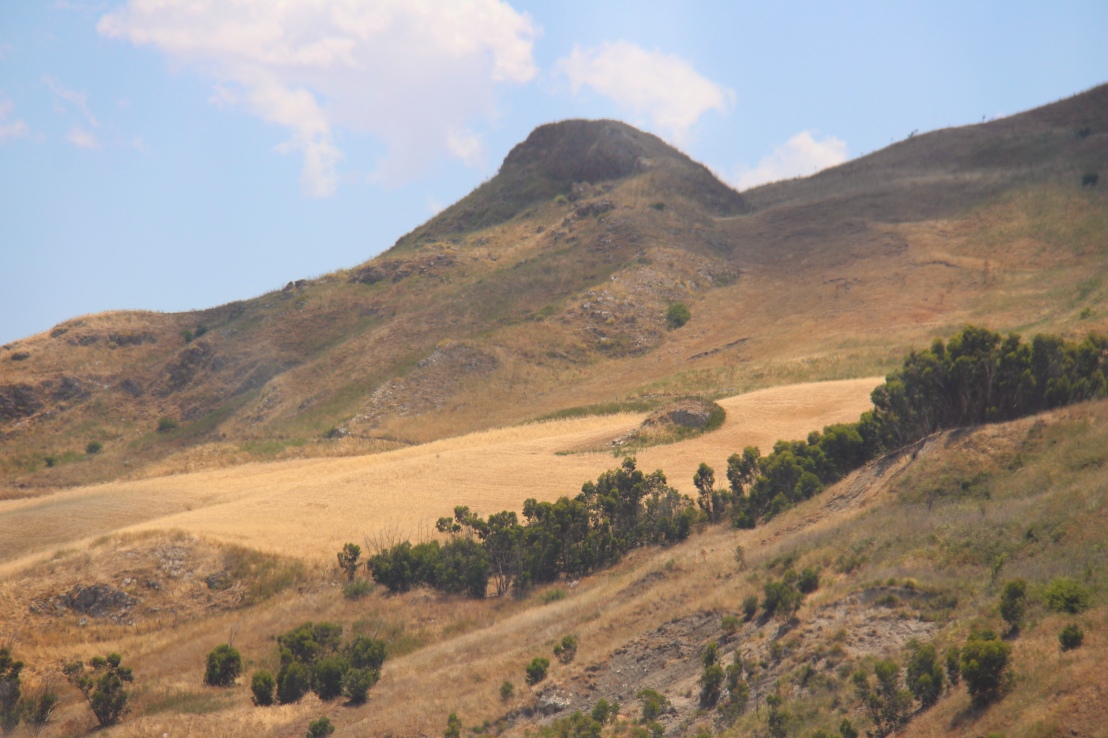 My plan to take photos of the full moon rising over Etna didn’t work out as it rose too far to the south, although I did get some ok pics of the countryside at dusk.  The light was gorgeous, even without the full moon.

We stayed two nights – got a bunch of laundry done, and took a couple of really nice swims in the pool.  Paparanza is another campground we’ll return to if we’re fortunate enough to make it back to Sicily in the future.

We got a really nice start the day we left, but within ten minutes as we tried to get on the motorway we were diverted.  The diversion was for quite a few miles – must have been a bad accident of something.  After sailing along once again we hit another snag just outside Catania – the traffic was very heavy and it took us about an hour to get past the city and on our way north.

Etna was within sight much of the way – she’s almost always venting from the top, and often from one of her slopes as well.

Miss Waze got us to the ferry terminal ok – she’s not talking to me anymore, but does show details of the route, and as long as I’m on the ball we make the proper turns.

We just missed one ferry, but only waited 35 minutes or so for the next one.  They load and leave so quickly I can’t believe it, and after another 25 minute journey we were back on the mainland.  Bye bye Sicily – hope to return one day!

We headed north up the motorway, then veered east to the ‘sole of the boot’.  At one point along the coast we had to stop for Henry to take a pee, and the sign for a vending machine in the next parking lot cracked me up.

I didn’t bother going for it – what the heck is ‘Canapa Light’ – is it like light beer?  If so – why bother?  Hahaha.

We found a lovely campground right across the road from the Sea just outside the small town of Cropani Marina.

One thought on “Bye Bye Sicily – Back to the Boot”