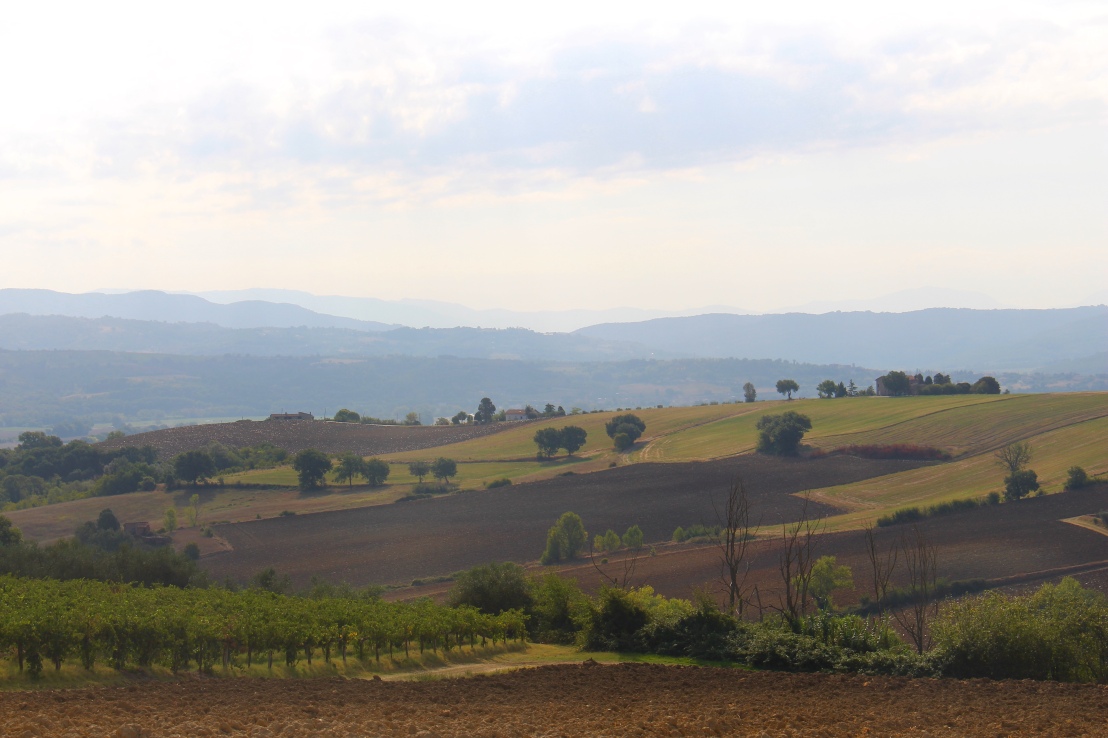 I’ve started going for slightly longer rides, mostly to the west/southwest and to some different villages. The terrain is still hilly, but a bit less cultivated, with more forests. 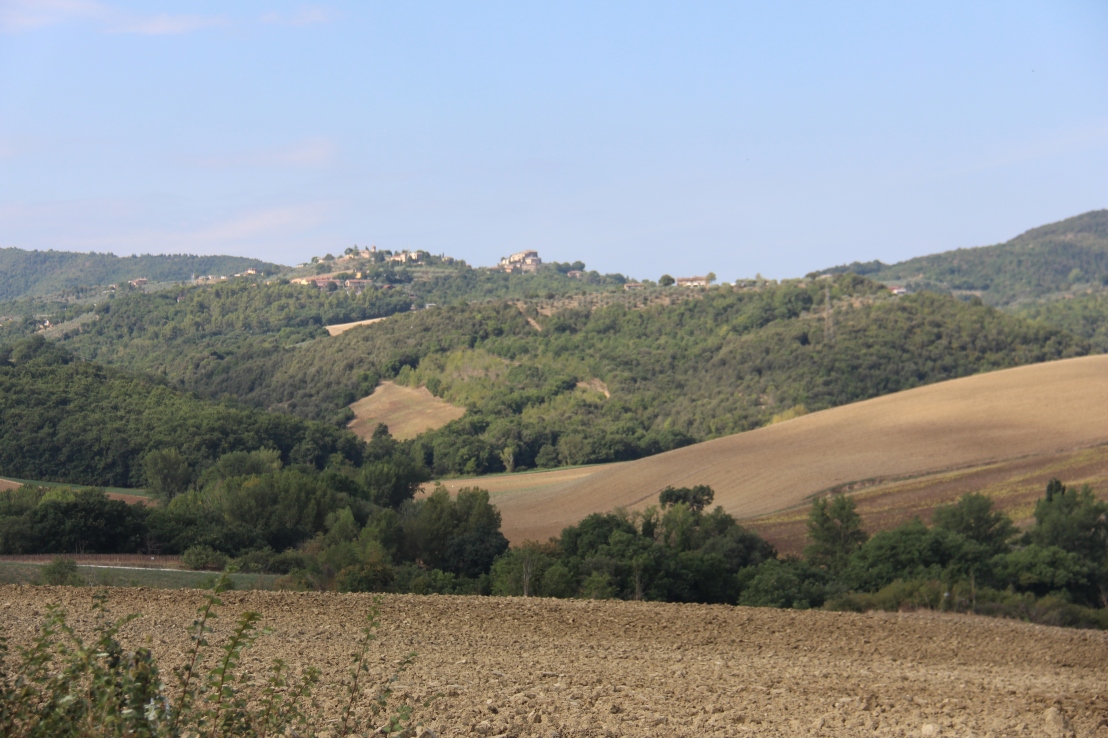 The geese across the way have all disappeared – one day they were there, the next time we looked they were all gone. A bit early for christmas goose, so we’re not sure what’s happened to them. 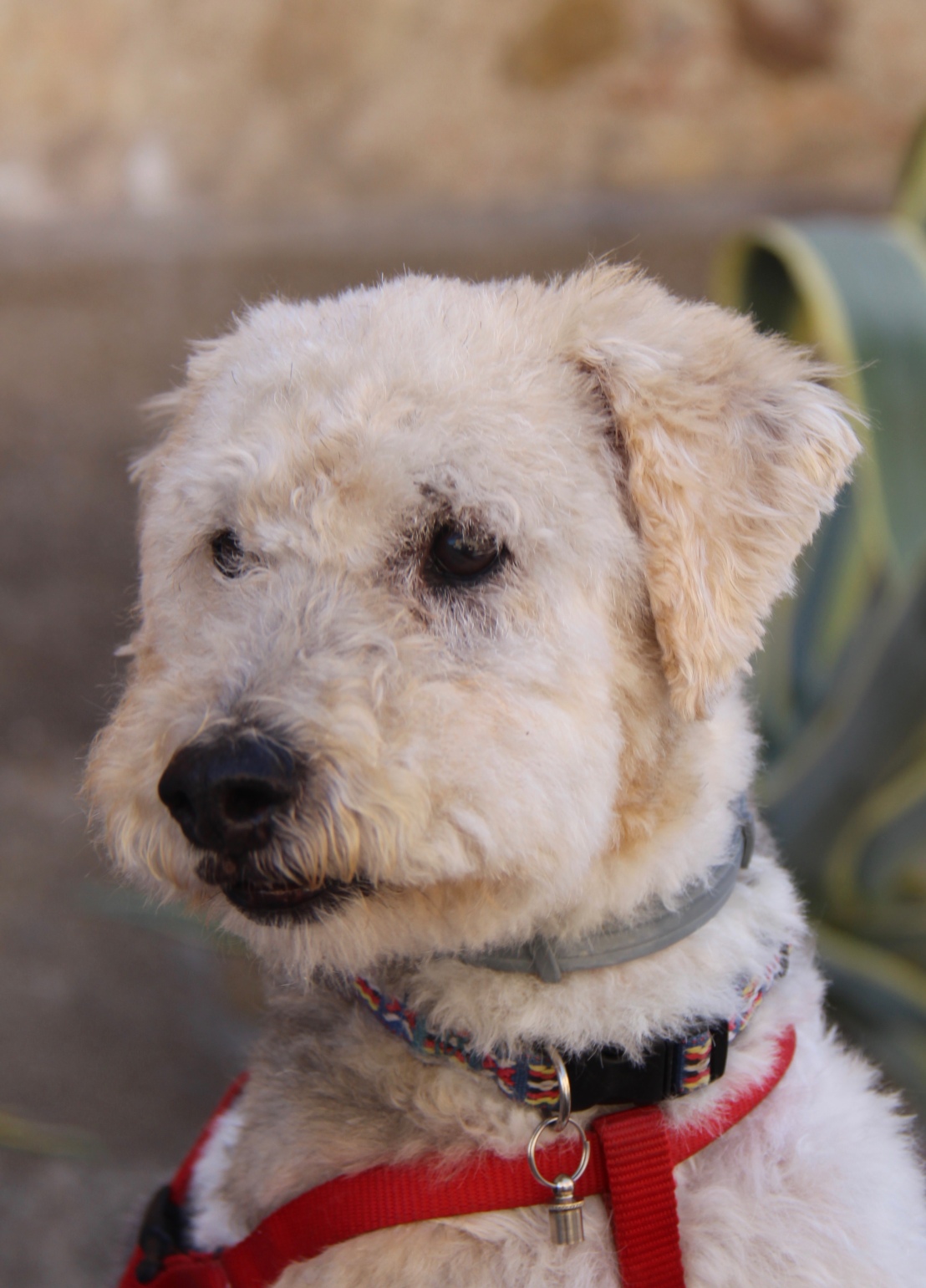 Henry got another haircut and looks adorable – I think he knows he’s looking quite stylish and seems to have a bit more swagger in his step. 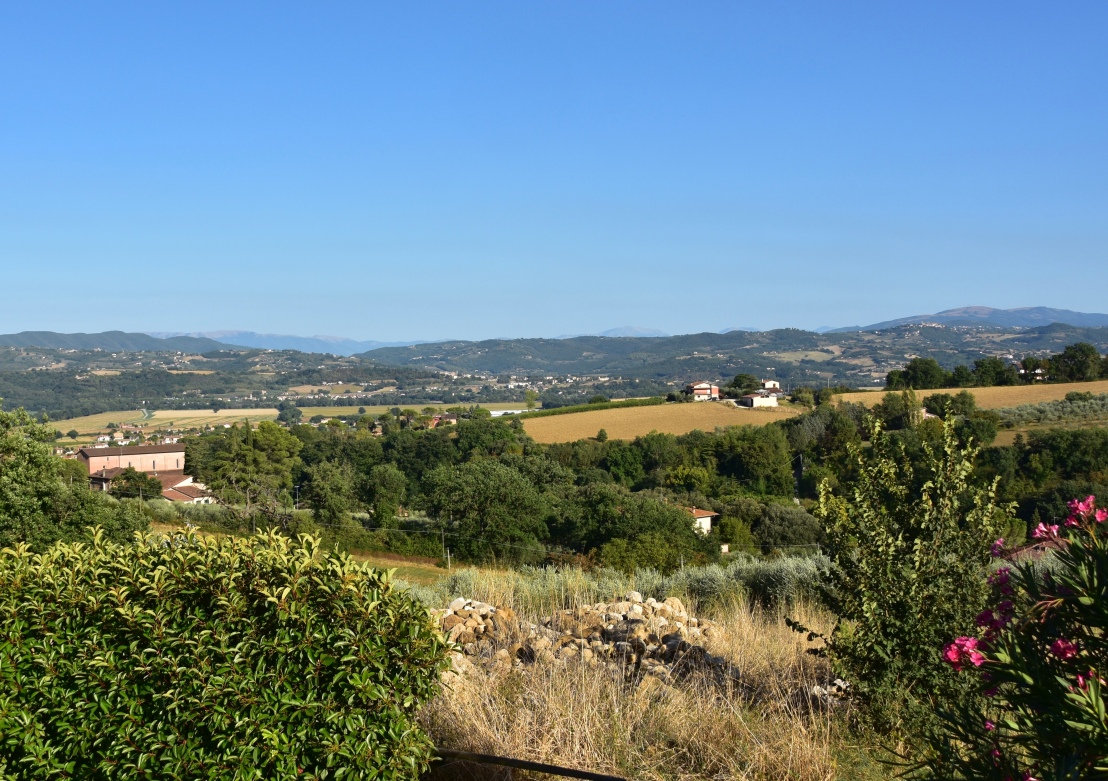 The brits, Janet and John, had a little pool party and dinner last Saturday, and it was just lovely. The pool isn’t heated, but really doesn’t need to be.

Their property is near the top of the hill across from us and has fabulous views of the surrounding hills and medieval village. 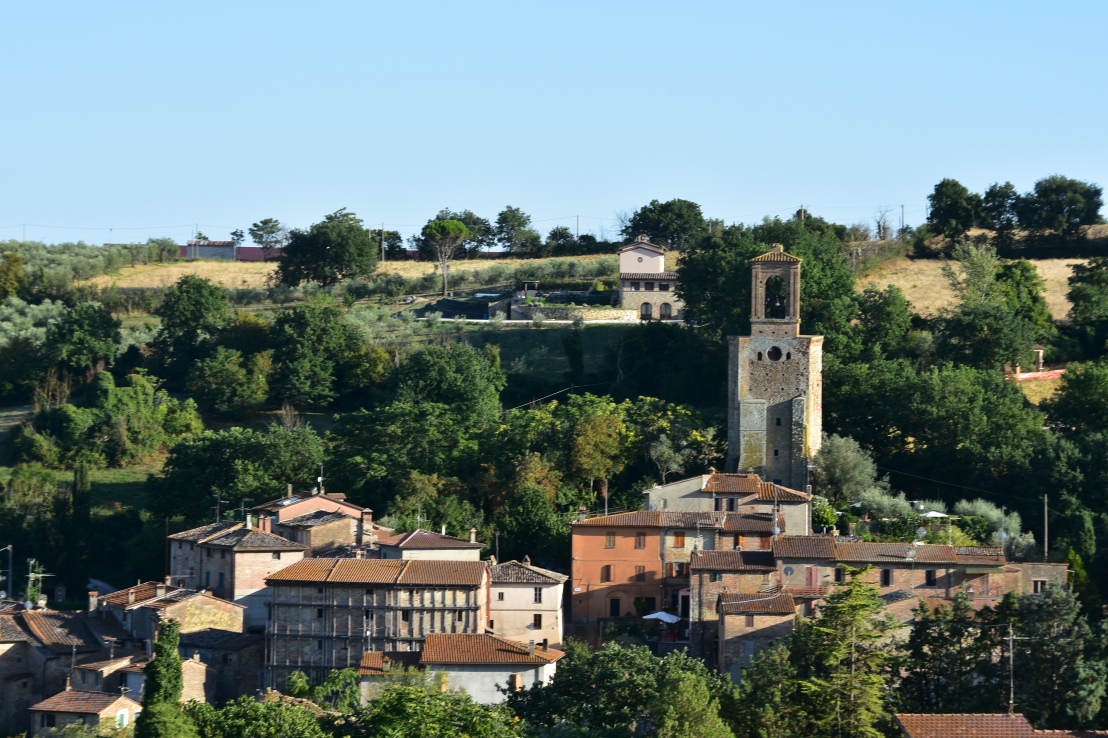 We knew some of the other guests already, and also met some new folks. Dinner was ‘BBQ’ and was much more than we expected. 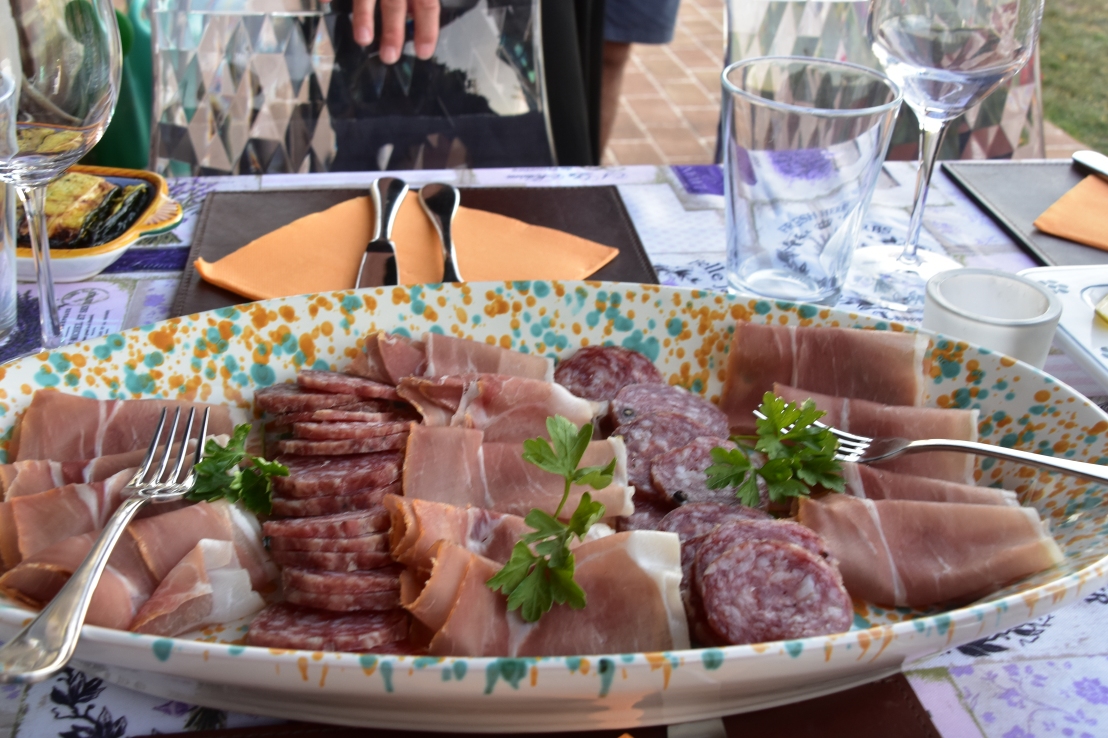 We started with several antipastos, including prosciutto and other cold meats, melon, olives, cheeses, etc., all of which were delicious. 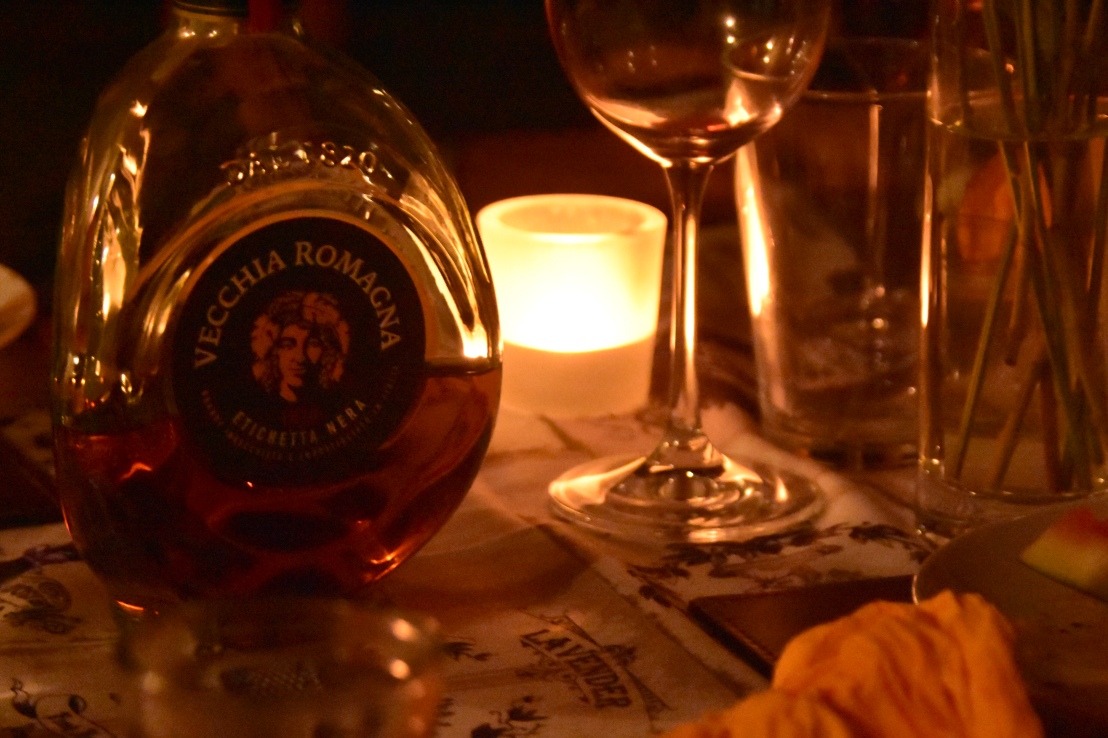 Then there was the main course – various meat skewers, sausages, etc., as well as a lovely salad. After that there was an abundance of delicious looking desserts, but as usual I passed on that course. 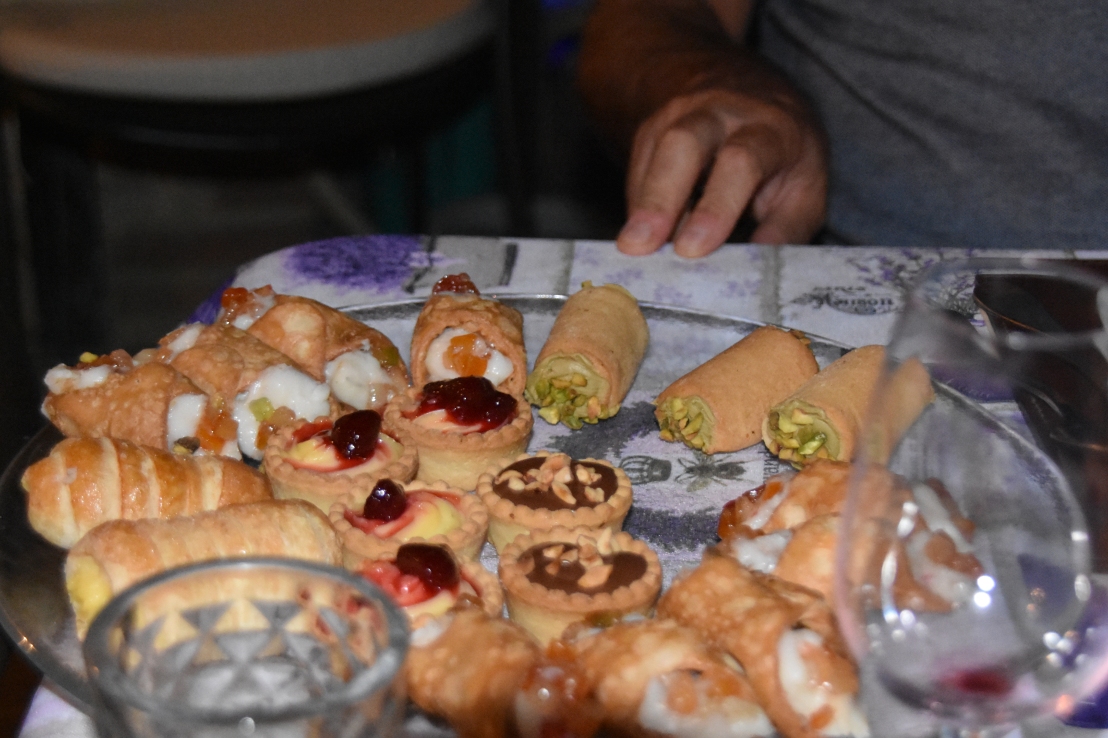 It was a very lovely afternoon and evening, and we walked back home fairly late – I think it was around midnight, which was much later than usual for us. 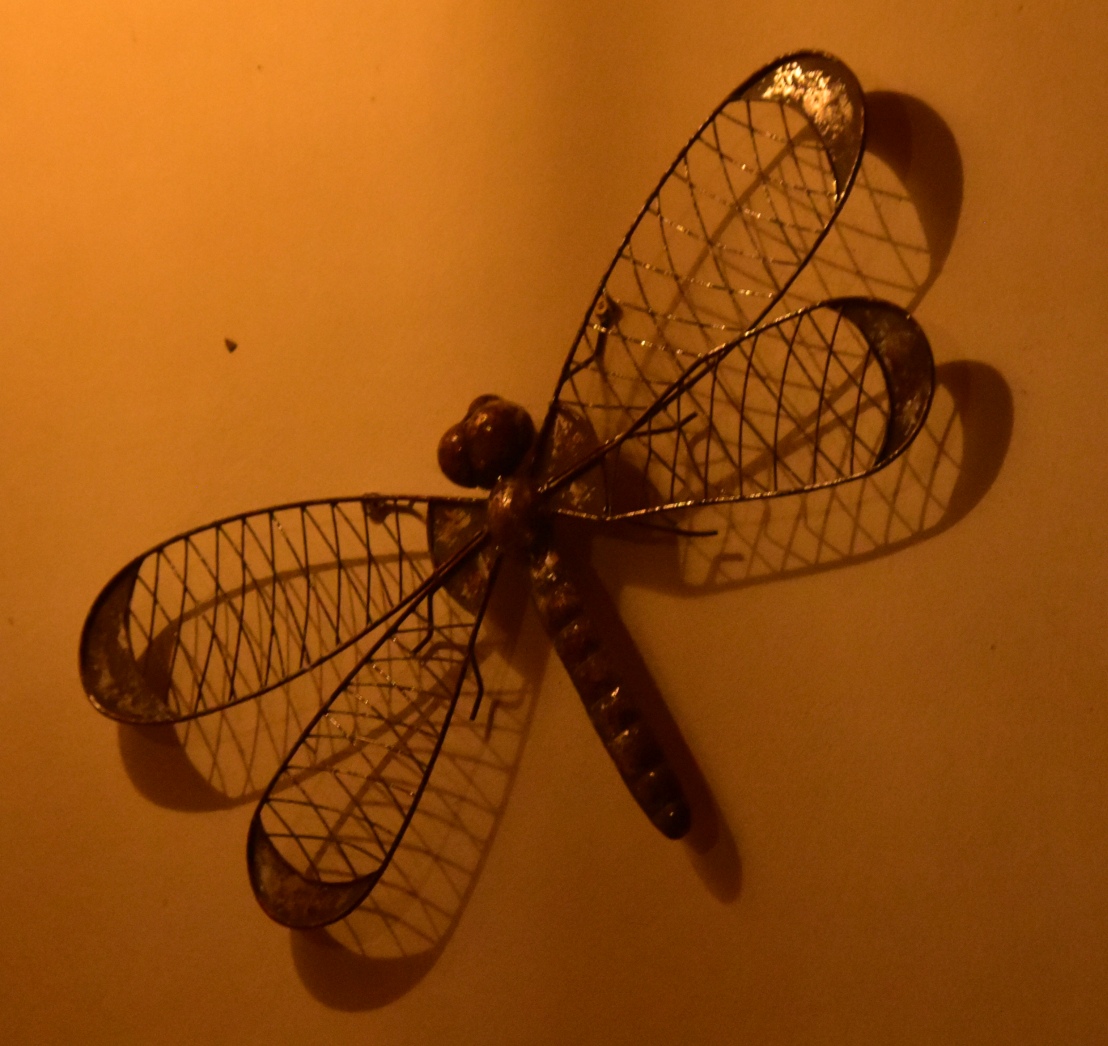 Chairman Meow has lost some weight, which is good since he had become a bit chubby – although we do wonder if we should now get him some worm tablets as it seems that he gets fed by at least two or three people daily so him losing so much weight seems a bit strange. 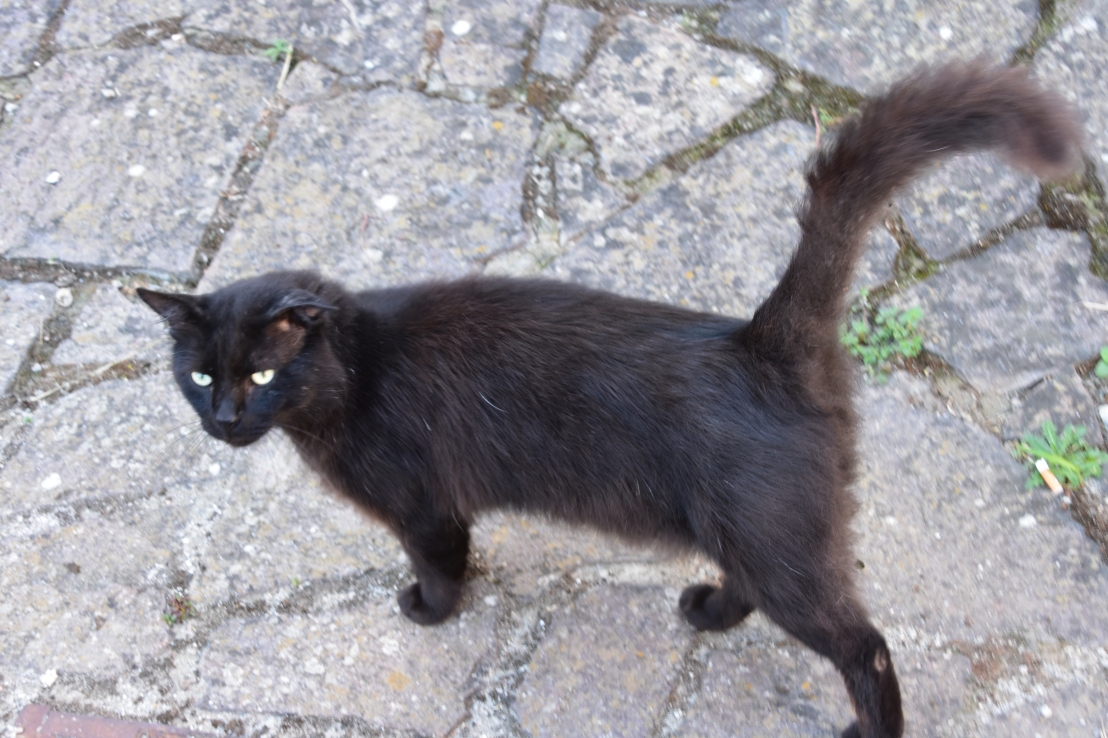 He’s still very friendly – especially if he thinks you’re going to feed him – but we still need to be wary of his teeth and claws that can come out quickly and unexpectedly. 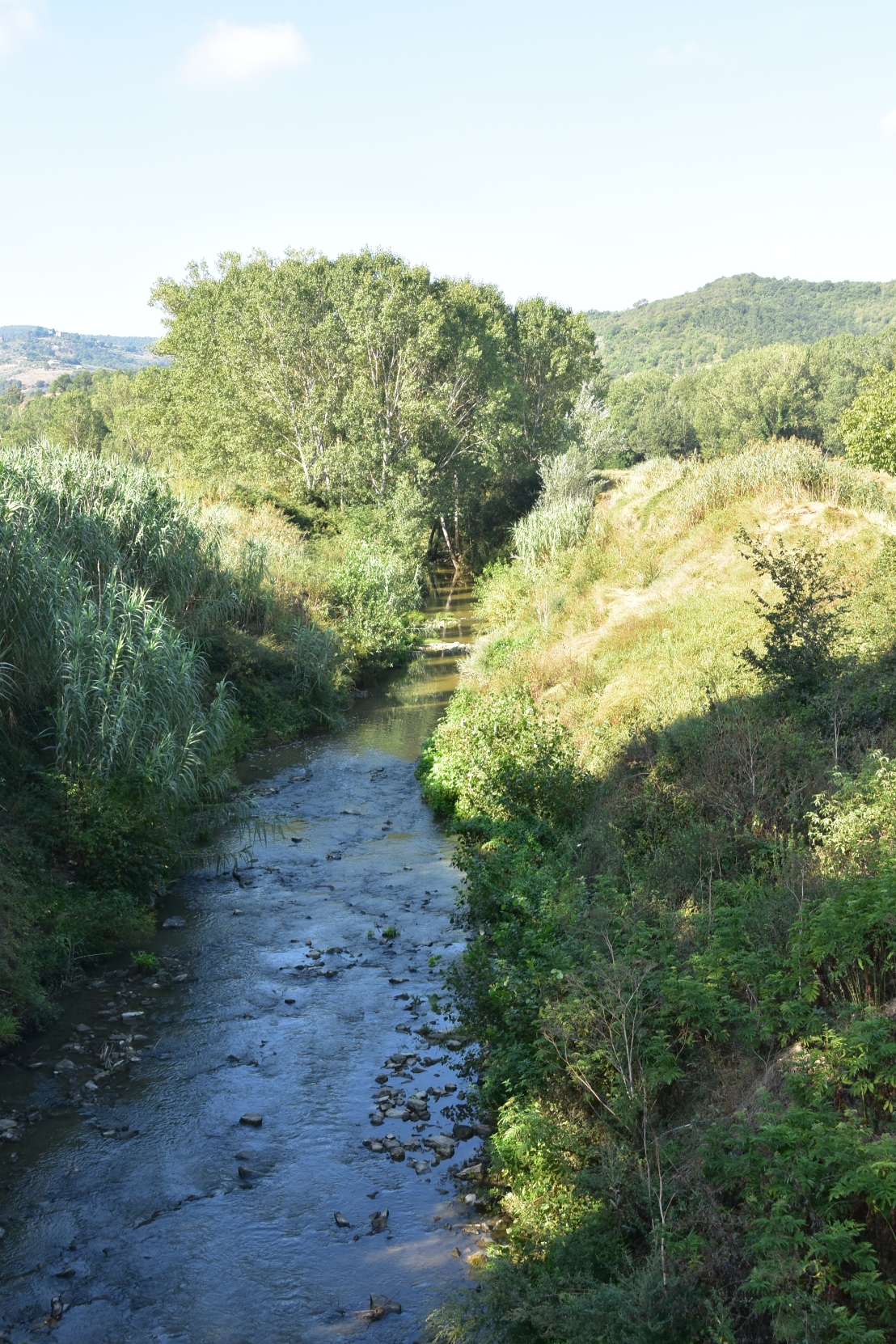 My longest ride so far has been about 33 km, and today’s foray was supposed to be fairly short. I left a bit late in the morning and stopped at the pharmacy in San Valentino della Collina for a couple of things. 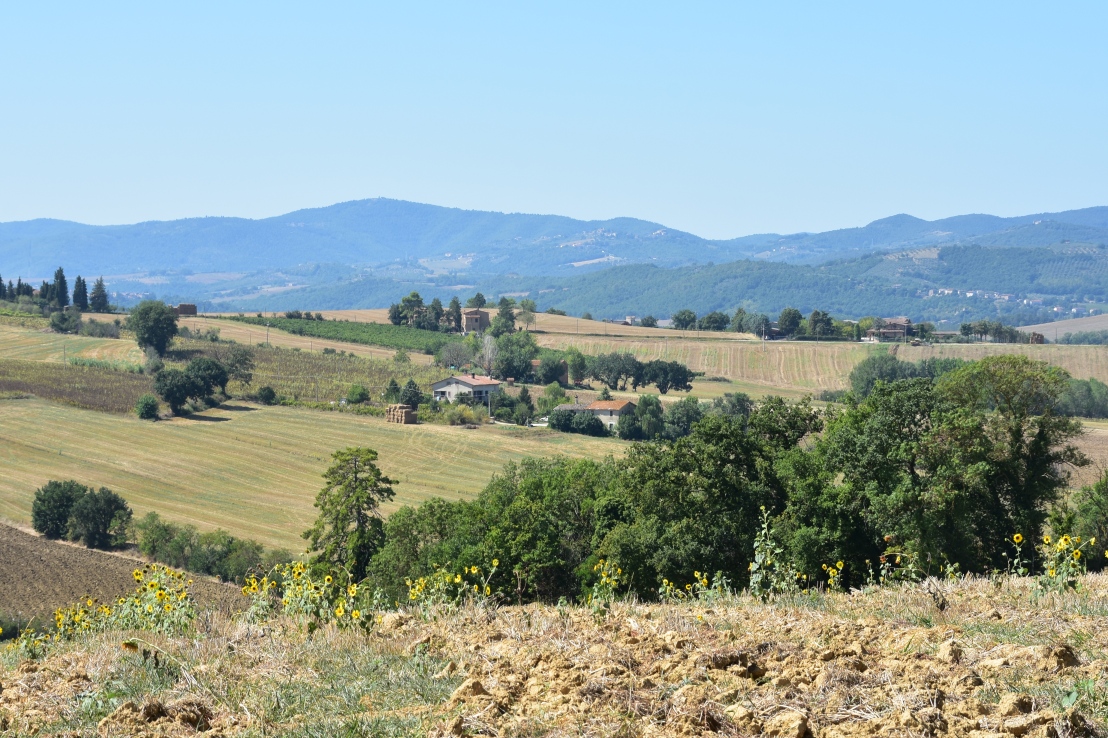 I planned on making a short circuit around to the Conad that has the good butcher, but it turned out not to be such a short way.

I’d used google maps to plan my route and had simply done a screen-shot of the map – no problem! Unfortunately on google maps you can’t always tell the difference between a small paved road, a gravel road, or a goat track – and I ended up on the latter.

After coming to a creek I could see the track continue on the other side, but alas – there was no way to get across so I had to backtrack some distance and go down another track. 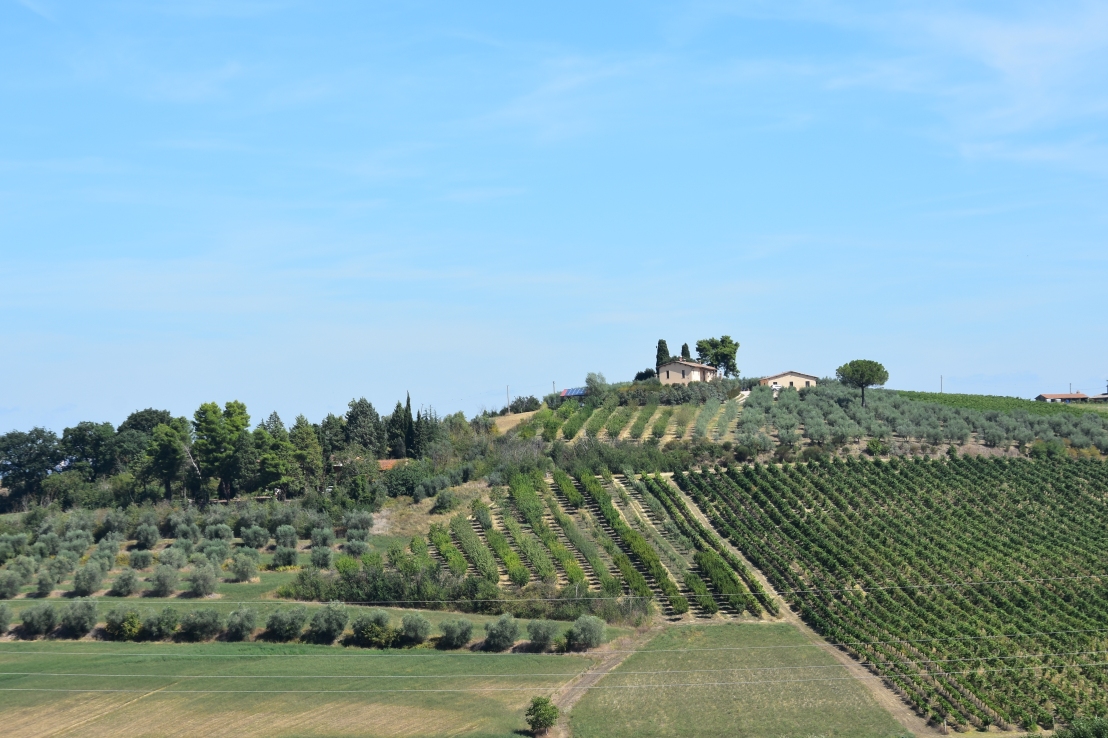 Luckily this path went thru to a proper road and I actually knew where I was. A short while later I was in the Conad store asking the butcher for some prosciutto. When I told him it was to go with melon as an antipasto he sent me to the cheese ladies next to him.

After calling for a colleague that spoke english I got what I wanted. I’m experimenting with several new things to serve at a small gathering we hope to host next week. As we weren’t able to properly celebrate Colin’s b-day back in April we’re planning a belated get together.