Looking back at the men’s road race I realize that I forgot to mention two interesting things – one involving people we know, and one involving bidons.

The first happened after the race had already passed a couple of times and Colin and I were both sitting on our chairs outside the campervan.  Suddenly Colin said ‘that looks like Alessandro’ and called out to two men walking up the road on the other side.

They stopped and turned around, and it was Colin’s friend Alessandro – he’s an Italian that takes photos and submits from time to time to PEZCycling online.  They stopped to chat for a few minutes then headed back down to where they were parked a bit below us (note – not the road in this photo!).

The second incident happened while I was at the agriturismo getting the wine.  I’d taken my previous photos from across the road and when I was done I’d collected the chair but forgot to grab my water bottle.  It’s an Israel Cycling Academy bidon and I’ve been using it for two years now whenever I ride or travel.  I like the colour, and it’s kind of special to me – the team doesn’t exist under that name anymore so I can’t replace it.

Anyway, Colin had seen a fellow stop and pick it up but didn’t realize what it was until it was too late.  I wonder what the guy thought about the traces of lipstick that were around the nozzle – haha!  I did pick up one new bidon that I didn’t have yet – AG2R – but I think I’ll now use one of the Quickstep bidons we snagged from Tirreno-Adriatico.

It had rained quite a bit during the night but we thought it would be ok getting out – the campervan has front wheel drive and the slope to the road was very gentle – but alas, we were wrong.

We slipped and slid but just couldn’t make it.  We gave up and walked down to the agriturismo to beg for help.  They were so kind – no problem at all, they said they’d be right there.

We returned to wait for them, and were standing near the road when a small 4×4 truck pulled up.  We tried to tell him that help was coming, but he’d already attached a strap to the pull-hook Colin had, but right then the farmer arrived on his tractor.  We thanked the 4×4 driver so much for stopping – it was very kind of him.

The farmer attached his chain and had us up on the road in no time.  I pointed to the tracks we had made in the mud while trying to get out but the older fellow that had also come up told me it was only a minor thing – no problem.  We thanked them profusely – both for getting us out of the mud, as well as letting us stay three nights on their property.

The drive home was mostly uneventful, except right at the beginning the new, fancy gps led us slightly astray and we had to turn around and backtrack several km – we were on the right road, just heading in the wrong direction.

Since returning to Papiano I’ve gone on more bike rides, now exploring the hills to the east.

Just over the Fiume Tevere (Tiber river) and across the motorway there’s a small road that winds up and over the hill past a deer farm to the next valley – it’s just beautiful.

Colin’s new bike finally arrived – it’s an electric mountain bike with huge tires and an even more powerful battery than mine.  Henry has been to the vet several times now – he is incessantly thirsty, and thus pees a lot.  They’ve ruled out diabetes and are now doing tests on his adrenal glands.

We went for a lovely ride this morning – the first time Colin’s been on a bike since his accident several months ago.

The views everwhere around us are always gorgeous, but the road surfaces often leave much to be desired.

We stopped at Antonio’s bar for a cappuccino on the way back but still got home in less than an hour and a half.  I was the first one in the door and realized immediately that something wasn’t right – there was a smell.

The doggies had both met me at the door so I knew they were ok but I suspected ‘protest pee’ on the floor.  It turned out to be much worse – not only had they both pooped, but they’d also gotten into the garbage can – it was tipped over and the bag was completely ripped apart with the contents spread all over the floor.  They’d even ripped open tea bags! 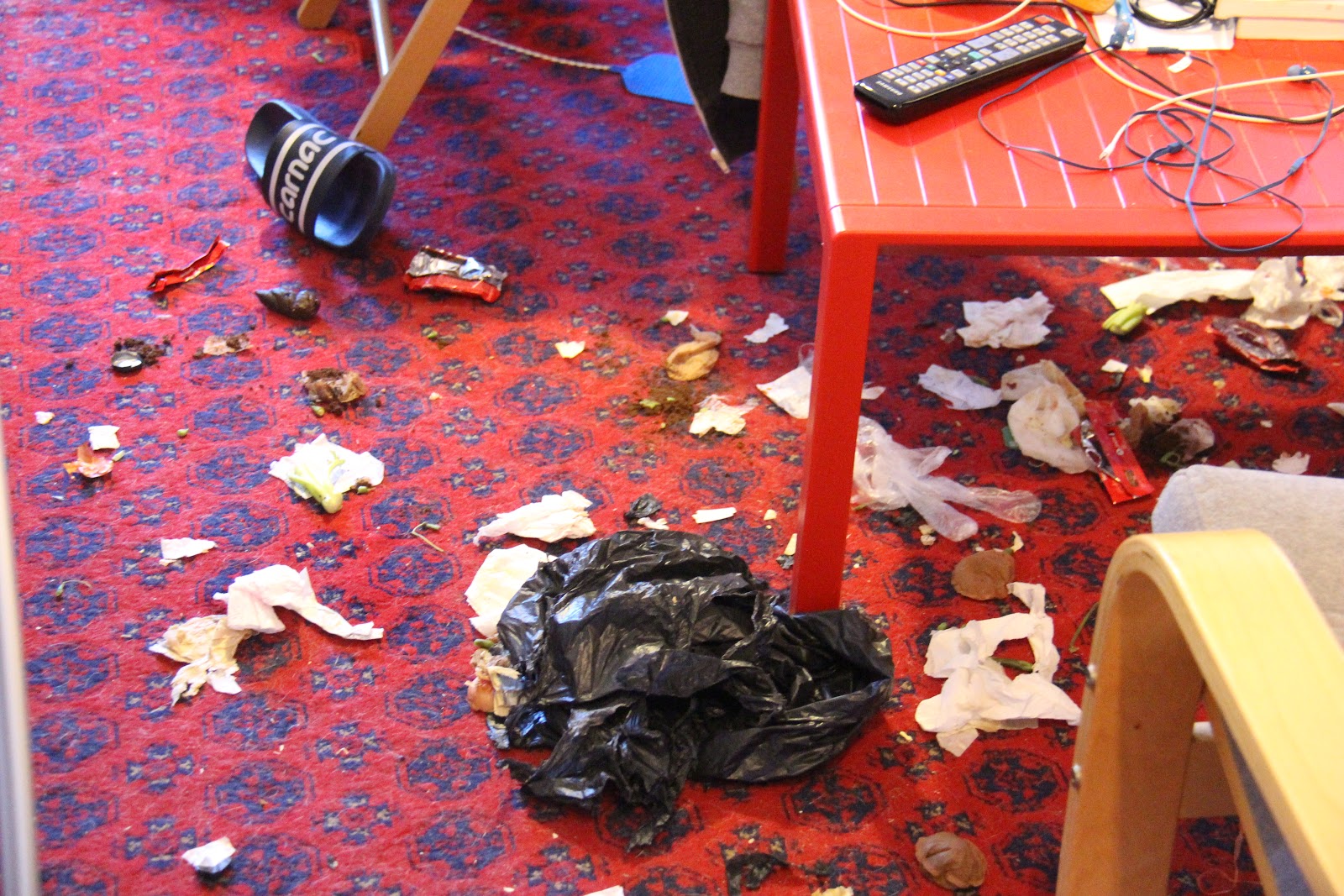 I laughed so hard I almost cried – neither one of them likes getting left behind and they made it very clear!