A week ago Friday there was a dinner at the bar – we both chose the scampi and chips.  As usual there were quite a few Brits there, although they’d put the tables a bit further apart so not so much socializing.  During the lockdown last year Edith and Sylvain had used the time to re-decorate a bit – it’s lighter and spiffed up, and looks really good.

When returning home from Ruffec one day we stopped to say a quick hello to Tony and Joyce in Fontenille.  It’s the first time I’ve seen Tony since he did the two beautiful paintings for Colin based on two of my photos so I finally go to thank him personally for doing them.  One of them is in Papiano, so I’d already seen it last year but the other – of Mo and Benny – I didn’t see until we got to Mansle ten days ago.

We’ve taken a couple of walks down to the campground, and the river is still pretty high, although after the flooding several weeks ago it actually has subsided.

They’ve finished putting the new windows in the Mairie and it looks pretty good – Colin is especially pleased that they’re no longer flying the EU flag.

Last Sunday there was a regional cycling race and Colin drove the lead car while I took a few photos.

Unfortunately the weather sucked and there were a couple of periods of torrential rain where I had to go and take shelter in the car.

During one break in the rain I took the opportunity to walk home before the next downpour hit.

We’ve gone for a couple of nice bike rides – the first up to Aunac for coffee.  I have to say it’s very pleasant to ride on roads that aren’t just pothole after pothole – even the small back roads here are in much better shape than most of the ‘main’ roads in Italy.

This Friday we took a day-trip to Cognac, with a quick stop first at a bike shop in Angouleme to get new pads for my front brake.  By the time we got to the campervan store near Cognac they had already closed for lunch so we took the opportunity to find a place to eat.

We came upon a cafe in a nearby village and had a lovely roast chicken lunch alongside a bunch of locals.

A very very exciting Tour de France stage a couple of days ago – Mark Cavendish has now tied Eddy Merckx’s stage win record with his fourth win of this year’s race.  After being a last minute choice to even go to the TDF, and almost a write-off in some people’s minds makes it even more special for the Manx Missile.

Yesterday we went for another, longer bike ride, this time up to Aigre for coffee.  A very good last minute decision was to wear my rain jacket/windbreaker – we were halfway to our destination when the clouds opened and we just got poured on.

The coffee was good and strong, although I do miss Italian cappuccino – cafe creme is not the same! 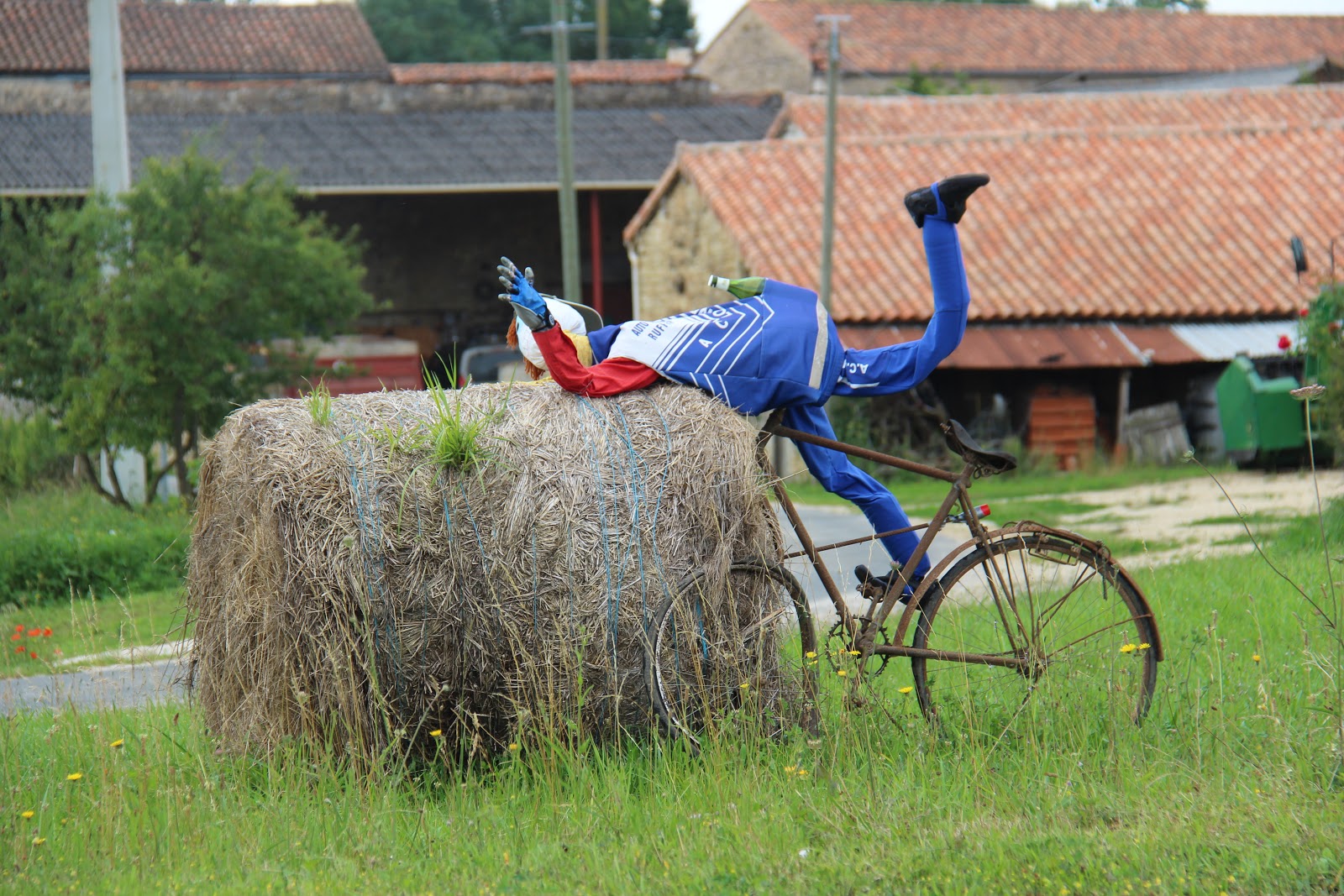 On the way home we got more rain, but thankfully it didn’t last very long.  At the village of Villesoubis there are several cute stuffed ‘scarecrows’, two of which depicted bike riders.

Another special day at the TDF yesterday – Cdn. Michael Woods is now the proud wearer of the King of the Mountains jersey.  It would be great if he can keep it until the end next Sunday.