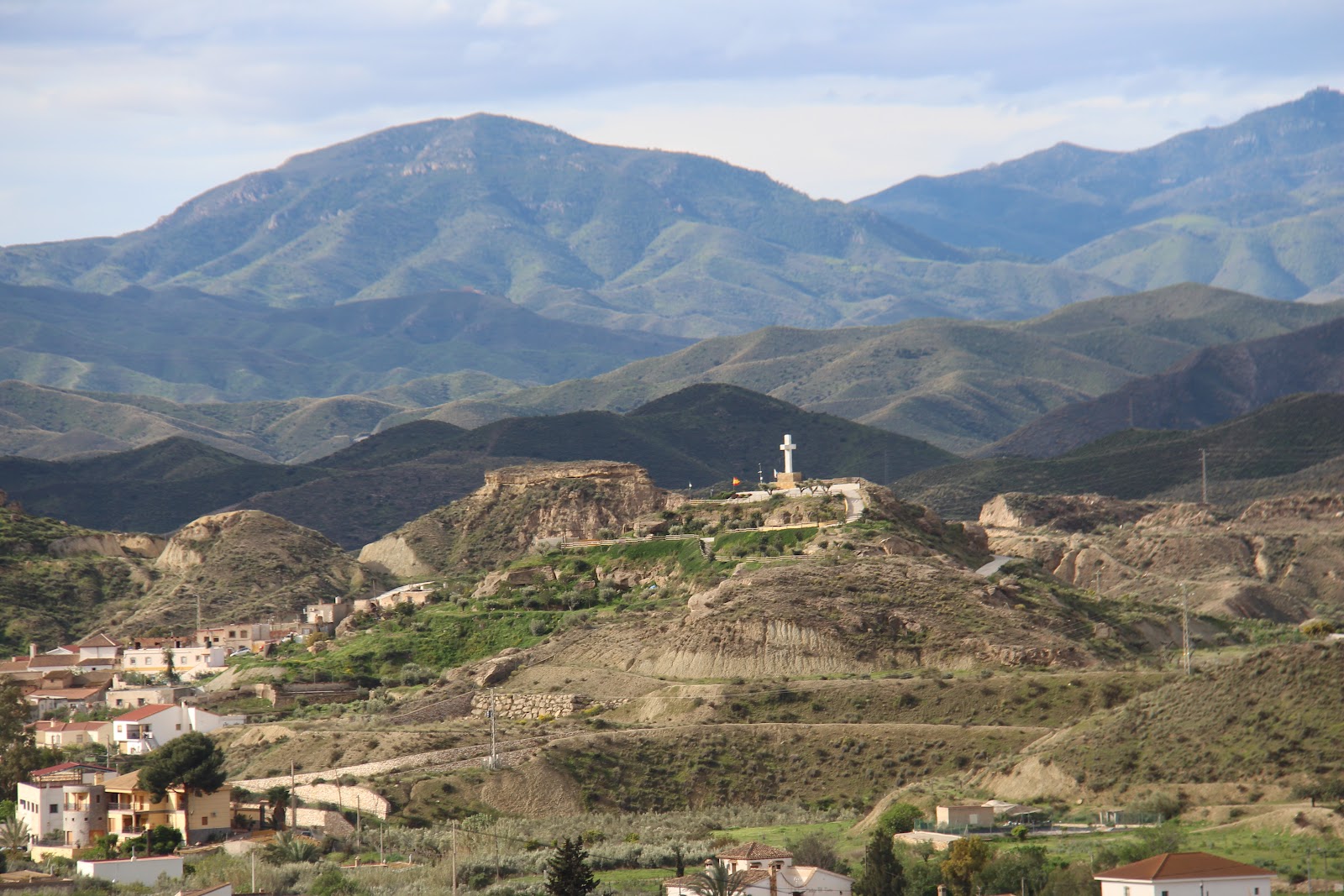 We received the contract for the house by email from the lawyer late one evening.  We had a couple of simple questions that we emailed back to them but by then everything was shut down for the five-day Easter weekend.

Not able to do any business we had a couple of very slow days, taking only one day-trip back north to Chirivel.  Once again we commented on the beauty of the area, and doing the loop in a different direction we came back via Oria.

Sitting outside one afternoon at the campground we got a bit of a shock – we had the canopy out as it was nice and sunny and were surprised by a large thump above us and seeing some spray.

I jumped up and stepped away to get a view of the canopy and could see what looked like bird poo spread out all over.  Colin got the hose out and sprayed it off – it was gross.  I was very glad for the canopy as I’d been sitting right below where the worst of the poo was and might have gotten it right in the face!

A short while later when inside the campervan Colin noticed that some of the brown shit had come thru the open vent above his bed and was sprinkled on his duvet – since we had just done a bunch of laundry the duvet cover was hanging on the line drying so the poo/goo was right on the duvet itself.

It actually didn’t smell bad so we’re not really sure what it was – maybe mud and bits of grass or leaves/needles.  We couldn’t figure out where it came from – we hadn’t noticed any large birds, although it was very windy and could perhaps have come from one of the large trees nearby.  It’s a mystery.

Another day we drove up near the new house and while Colin sat with the dogs outside the restaurant and had a coffee I finally – for the first time this year! – got on my bike.  I rode up the nearest rambla and pedaled leisurely along below the house and north almost to the sanctuary.

It was a very nice ride, although I did have to pay good attention to the ‘road’ surface, which is a combination of dirt, gravel and sand, and having many washout grooves from all of the recent rain.

I think being able to explore the ramblas will almost make up for not being able to ride the canal paths in and around Worcester anymore.

The ride north was all gently uphill, and hardly noticeable – you could only really tell there was a gradient at all because going back south to the restaurant I hardly had to peddle – I might even have been able to coast the whole way if I’d wanted to.

After the long-long Easter weekend we got to do some more business.  A quick visit to George at the estate agent office answered most of our questions regarding the contract.  He printed it for us and we signed it.  We then popped into the bank, which we were lucky to get into as it was market day and the street was packed with stalls.

Our representative was with other customers so we made an appointment for an hour later.  When we saw him at noon he did a transfer for us of 10% of the house purchase – our bank cards hadn’t arrived yet and we also don’t have an NIF number so we couldn’t do it ourselves.  We gave him the papers showing where the large transfer of cash from the UK came from to back-up the anti-money laundering file on the account.

After the bank we returned to where we’d parked the camper van – about a km back along the road out of town because of all the extra parked cars for the market.  Next stop was to drop off the papers at the lawyers – a one-pager from the bank showing the 10% had been done, as well as the signed contract.  Another step forward!

2 thoughts on “Slow days over Easter and another step forward”