Well – the day I came here for has arrived! Starting with bright sunshine and birdies chirping. Had a nice hot shower, did yoga, had breakfast on the terrace. Walked up to where Colin parked his campervan yesterday and got ready for the race. Saw several local cycling clubs ride by, a lot of individual cyclists, as well as a couple of actual racers still practising the route, including Quintana.

Lots of campers and other fans had arrived since yesterday – they were lined up and down the road, with flags and everything. Someone had marked things on the road – WW/108 for Walter Weylandt, who died in the 2011 Giro. Also Scarponi with a heart, for Michele Scarponi who was killed in a crash with a van while training for the Giro a couple of weeks ago. 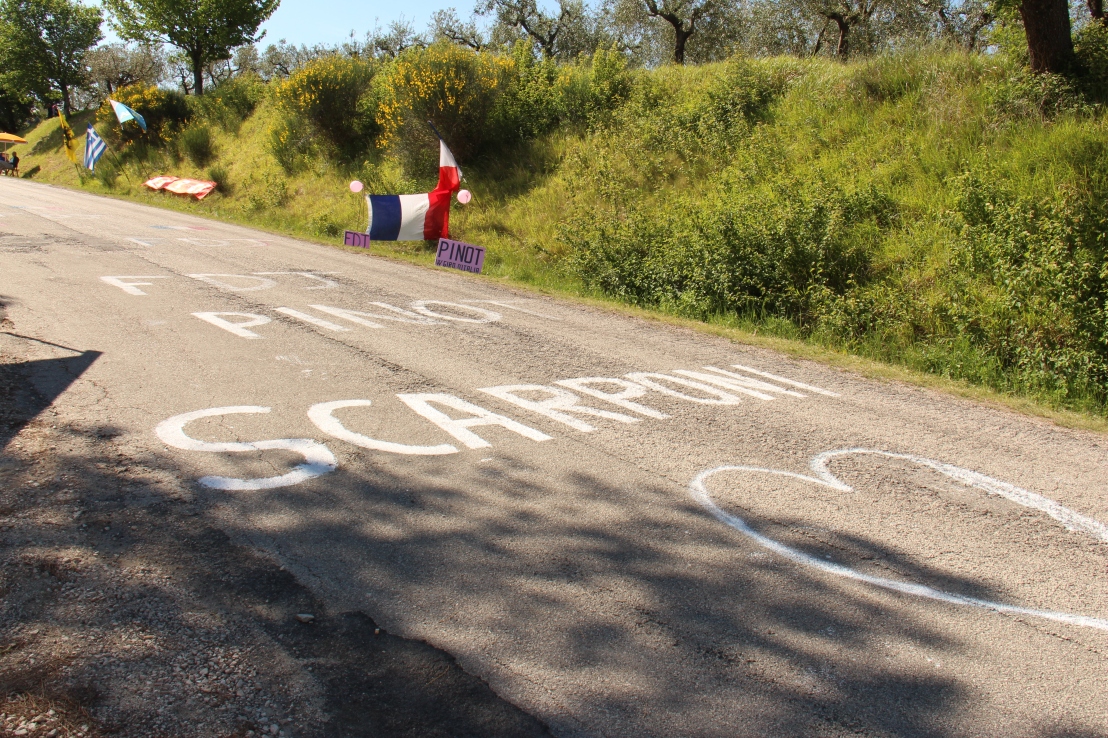 Festivities started with about a hundred police motos with blue lights flashing, then all of the sponsors vehicles – going at an incredibly fast speed – no treats or freebies from them.

The first racer left Foligno at 12:45 – went past us at about 1:05. It was very sunny, but windy, so not too hot. I’m trying to stay out of the direct sun so my heat-rash (or whatever it is) doesn’t get any worse.

Took lots of pic’s – almost every rider that went by. Each racer is preceeded by a police moto with lights flashing, and followed by a team car and possibly camera moto. Lots of blurred/over exposed/under exposed pic’s, but some ok ones.

(The above is an action shot –  purposely a bit blurred)

Lots of folks congregated and walked past – to and from the church where they were selling coffee and gelatos, etc. Met some nice folks, including a family from Victoria that is in month 11 of a year-long trip – John and his son are on the right in the pic below, and that’s his son again sitting on the hill.

Watched Nibali go by, then the last few, including Dumoulin, who went on to win the ITT by quite a large margin.

Quintana in the pink was, of course, the last to pass us – watched the rest of the race on Colin’s satellite tv.  Headed back to the campsite around 5:45, then met Colin on the terrace to go over our pic’s. Had a bit to eat, heading to bed early.